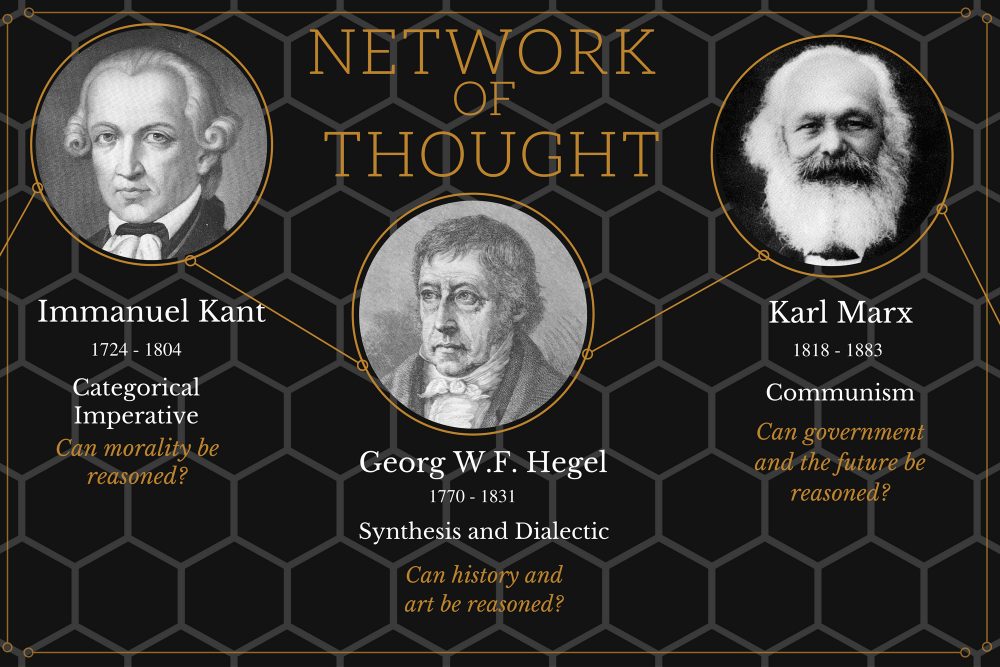 To understand where ideas come from and how they evolve over time, sociologist Randall Collins mapped the networks of 3,000 philosophers and mathematicians, a yeoman project that took him on a 25-year journey across the globe, seeking insights into the histories and inner workings of societies and the thinkers who shaped them.

More recently, Grant Oliveira, a data analytics consultant with an interest in the origins of philosophical thought, embarked on a project to corral the universe of philosophers that exist on the web, namely via their Wikipedia profiles. That project—which took about two weeks—yielded flawed but promising results.

Looking at these two projects together—one the product of decades of deep gathering of ideas, the other the harvesting of crowd-sourced data—provides some interesting contrasts that in themselves shed light on how ideas are born and perpetuated.

For Collins, his personal networks influenced the project. Early in his career he worked with an Israeli professor, Joseph Ben-David, who was studying the origins of modern science. His mentor explained how the German research universities created the model imitated by England, France, and the U.S. 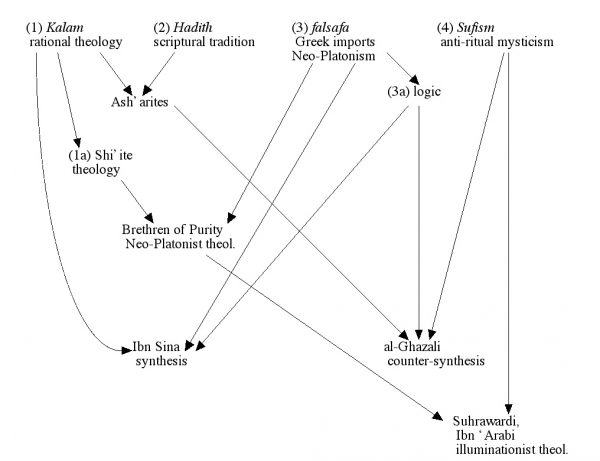 Collins researched the networks of Islamic thinkers in the 8th through 12th century. Courtesy of Randall Collins.

“I had been a philosophy student before sociology so I was interested in people like Kant, Fichte, and Hegel, and I knew they were connected in a network,” Collins said. “As I read more about it, I realized these were the leaders of the revolution to upgrade the medieval university into a research university. I had also studied the social history of the world religions.

“I went to Zen programs up in the mountains near Los Angeles and found out that the famous Zen Masters were in the same kind of networks too. I made a point of learning Chinese and Japanese history as well as the history of education in Western societies. The networks gave me a gestalt for holding it all together. I traveled to historic sites around the world, and tried to meet the experts in each area. They usually weren’t interested in networks per se. But knowing the key people helped in finding out what they considered the key literature, until I began to feel some closure in the project. That’s why it took me 25 years to do this.” 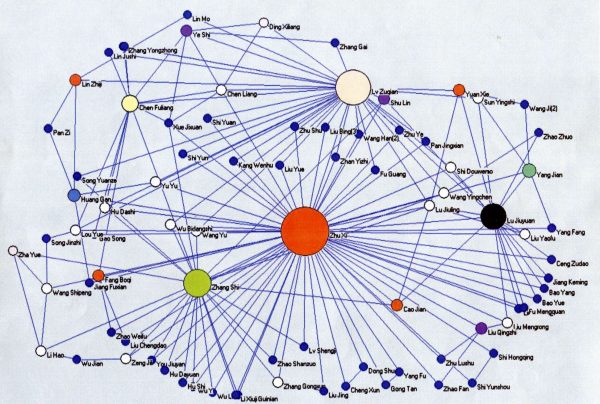 Collins map of the relationships between philosophers in 11th and 12th century China. Zhu Xi, the philosopher represented by the red dot in the center, is the most influential scholar of the Neo-Confucians.
Courtesy of Randall Collins.

Oliveira used Wikipedia to create an algorithm to identify philosophers, the era that they lived in, and the networks they were part of, including who influenced them and who they influenced. Because some philosophers on Wikipedia may have additional or alternative categories, he acknowledges that this network is not authoritative and has some weaknesses.

An interactive version of Grant Oliveira’s “Philosopher’s Web”. Click the 3 dots on the left to expand. For optimal experience, view on desktop or open a new tab here.

A future update will see the inclusion of other, non-Western philosophers that are categorized differently on Wikipedia. As with all data products, he says, “you should take this with a grain of salt.”

As for his own networks of influence, Oliveira’s academic background is in political science, but the network that influenced him was in data science. He explains: “I got my first grounding from online certificate courses offered by Johns Hopkins taught by Roger Peng, Jeff Leak, and Brian Caffo. They were all influences of mine. I’ve also taken courses by Andrew Ng who worked for Google on machine learning. I follow Gareth James of USC and the rest of the co-authors of An Introduction to Statistical Learning.”