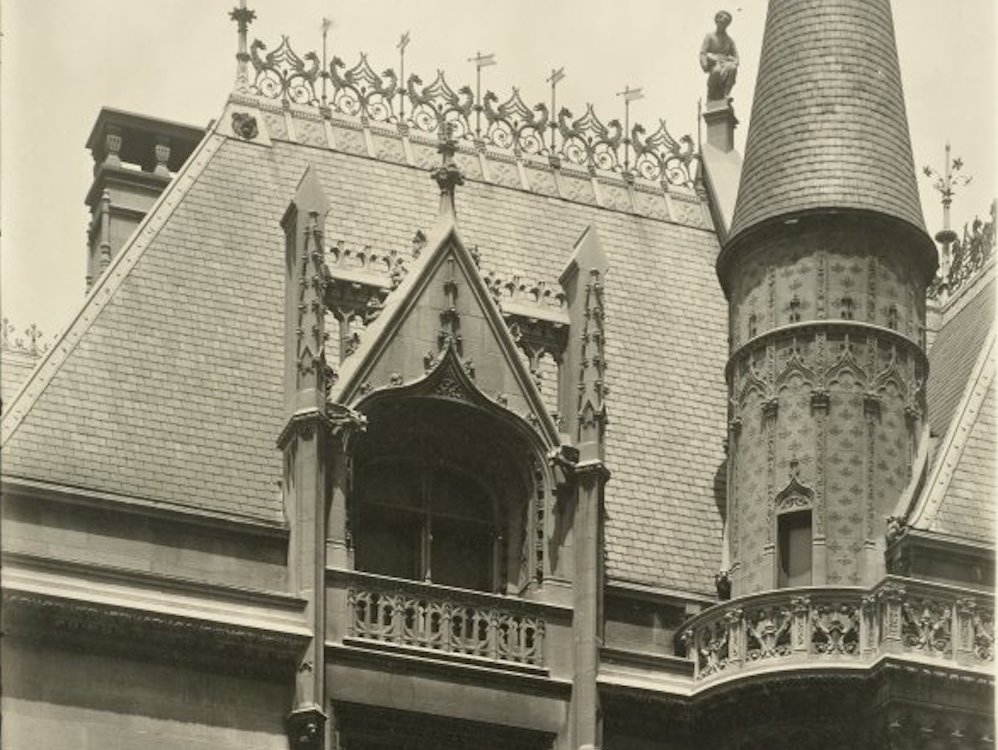 Sixty-six floors above Midtown Manhattan, Donald J. Trump lives in a fantasy world copied from the French royalty of the 18th century. His residence, an enormous three-story penthouse that has been valued at more than $100 million, embodies his tastes and expresses his understanding of himself. With floor-to-ceiling windows that look out onto parts of his real estate and licensing empire, the penthouse was apparently inspired by Louis XIV’s Versailles Palace. According to the numerous articles that Trump’s publicists have arranged to be written about it and placed in design magazines and websites, its front door is encrusted with gold and diamonds, its interior walls, columns, and floors are covered in marble of different hues, and its chandeliers, lamps, and vases are plated in 24-carat gold. Paintings and statues in the styles of ancient Greece and the European Old Masters share space with the Trump coat of arms and Trump family portraits, all signaling that this is a man who believes he has done great things that have rightfully elevated him above ordinary Americans.

The four most prominent characteristics of the Trump penthouse—its phenomenal size, ornamental gaudiness, aping of the European royalty and affinity with classical European artistic traditions, and public conspicuousness—are also how earlier generations of upper-class New Yorkers used their homes to display their wealth and power and convey their distinction. This pattern was at its height during the Gilded Age of the late 19th century, during the reign of famous uber-capitalists such as Andrew Carnegie and John D. Rockefeller, with whom Trump seems to identify. Prior to the late 19th century, the houses of elite New Yorkers were decidedly more modest than they became in the Gilded Age; afterwards, the wealthy generally chose to shield their residences from public scrutiny and their tastes shifted away from the classical and neo-classical.

Among the handful of upper-class homes built in Manhattan during the colonial period that survive today is the Morris-Jumel Mansion in the present-day Washington Heights section of the upper part of the island, which was constructed in 1765 as a country house for Roger and Mary Morris. Roger Morris had been a colonel in the British Army and was a member of the royal governor’s executive council; Mary Morris was the daughter of Frederick Philipse, one of the wealthiest men in New York colony. Their country estate covered 130 acres of woodlots, orchards, and pastures and offered sweeping views of both the Hudson and Harlem Rivers, lower Manhattan, and what is now the Bronx. The Morrises’ primary residence stood at the corner of Whitehall Street and Stone Street in lower Manhattan, close to the Bowling Green neighborhood that stood as the most exclusive enclave in the colonial city.

Another example of an upper-class New York City home from this same period was the six-room, two-story brick house where Abraham Lodge, a prosperous attorney, and his family resided during the 1750s. The Lodge mansion employed superior building materials such as brick and glass which had been previously unavailable in the colonies in either quantity or quality, and its interior boasted fine furnishings—many of them imported from Europe—that displayed the refinement and gentility of its owners.

Few images of the Morris country mansion appear to exist, but contemporaries remarked on its large size (for its time) and its elegant Palladian architecture. The Morrises were Tories who fled the United States following the American Revolution, and their country estate was seized under forfeiture laws and fell into disrepair. In 1810, the house was purchased by Stephen Jumel, a wealthy French merchant, and his wife Eliza, who remodeled it in the Federalist style that was then the height of architectural elegance, adding a columned portico and overhauling the interior. Today, it is a historic house museum.

Like tourist maps that show the location of the homes of celebrities in Los Angeles today, 19th-century New York guides encouraged visitors to gawk at the fairytale mansions in Murray Hill. … these mansions advertised the achievements of their robber baron owners.

By the 1830s, the city’s prime upper-class residential area was the Lafayette Place-Bond Street neighborhood in what is now Greenwich Village. As the economy of New York City took off after the War of 1812 and the merchants’ offices, warehouses, shops, and rooming house that were the products of this urban economic boom began to encroach on old elite neighborhoods (like Bowling Green) in lower Manhattan, upper-class New Yorkers relocated to new neighborhoods like Lafayette Place-Bond Street that were emerging on the periphery of the built-up area. There, merchants, lawyers, bankers, and physicians settled in newly fashionable row houses and mansions. In 1835, Seabury Tredwell, a prosperous hardware importer, and his wife Eliza bought a red brick and marble row house on a block of Fourth Street in the Lafayette Place-Bond Street enclave for $18,000 (which would be equal to $460,000 today). While many similar dwellings that went up in this vicinity before the Civil War were subsequently demolished or transformed beyond recognition, this house and its furnishings have been preserved almost completely intact because the youngest Tredwell daughter continued to live there until her death at age 93 in 1933. Three years later, the building became the site of what is now the Merchant’s House Museum.

Able to live well, if not as extravagantly as their nouveau riches neighbors the Astors and the Vanderbilts, the Tredwells made use of their city house (and their country estate in Rumson, New Jersey) to corroborate their wealth, prestige, and taste. The front and rear parlors that occupied most of its first floor had wooden Ionic columns and plaster moldings inspired by the fashionable Greek Revival design. New household technologies like the Tredwells’ modern bell system and cookstove became status symbols for elites.

In the late 1860s and the 1870s, upper-class residences resumed their progression up the east side of Manhattan. They were displaced from the pre-Civil War elite neighborhoods (like Lafayette Place-Bond Street) as retail shops, stables, warehouses, and middle- and working-class inhabitants overtook those areas, while also being pulled further uptown by the open space and larger lots available there. In the 1880s the finest upper-class neighborhood in the city was Murray Hill, which occupied a corridor that ran up Fifth Avenue and Madison Avenue starting at around 23rd Street. Extravagant mansions occupied the corner lots in Murray Hill, including Alexander T. Stewart’s at Fifth Avenue and Broadway, Leonard Jerome’s at Madison and 26th Street, and Collis P. Huntington’s at 57th and Fifth Avenue. Stewart was an Irish-born entrepreneur who opened the first department store in the United States, the famed Marble Palace at 280 Broadway in New York City in 1848, and who went on to make a fortune from retailing; Jerome was a stock speculator as well as a sports aficionado who participated in yachting and thoroughbred horse racing; and Huntington was one of the promoters who constructed the Central Pacific portion of the first U.S. transcontinental railroad.

Many of the architects who built these Gilded Age mansions had trained at the Ecole des Beaux-Arts in Paris, and their designs mimicked Georgian town houses, Venetian palazzos, and French chateaus. Richard Morris Hunt created the mansion of William K. and Alva Vanderbilt at Fifth Avenue and 52nd Street in the style of a French Renaissance chateau. It was built primarily by craftsmen brought over from Europe, and decorated with stone and wood carvings, stained glass, and embroidered textiles imported from the continent. Even grander was the 130-room palace of Cornelius Vanderbilt II, which occupied an entire block front on the west side of Fifth Avenue from 57th Street to 58th Street, and to this day is the largest single-family house ever built in New York City. Seabury and Eliza Tredwell’s row house (which had 17 rooms and 7,100 square feet of inhabitable space) could fit inside this Vanderbilt colossus 10 or 12 times over.

By the end of the 19th century, New York City guidebooks were lavishing 10 or 15 pages apiece on Murray Hill, with some laying out stage coach or pedestrian tours that let tourists “pass miles of the most magnificent and costly residences in America.” They supplied the home addresses of grandees such as Cornelius Vanderbilt II, John Jacob Astor IV, and John D. Rockefeller, along with descriptions of their mansions that estimated their construction costs. Like tourist maps that show the location of the homes of celebrities in Los Angeles today, these guides encouraged visitors to gawk at the fairytale mansions in Murray Hill. With their showmanship, ostentation and huge expense, these mansions advertised the achievements of their robber baron owners.

Since the Gilded Age, the homes of upper-class New Yorkers have gone in divergent directions. Many elites became concerned about their privacy and security and either moved their primary residences out of the city altogether or lived in apartment buildings, like the River House, at 435 East 52nd Street. After World War I and World War II devastated European societies and brought about the political and financial eclipse of their hereditary peerages, the European aristocracy lost most of its allure for rich New Yorkers. While the stuffy European traditions and the over-the-top displays of ornamental splendor of the Gilded Age never entirely faded away, in the 1950s elite New Yorkers with fashionable tastes began to adopt a modernist aesthetic, and by the 1970s they preferred more vernacular styles as they went about gentrifying brownstone neighborhoods like Park Slope in Brooklyn and former industrial areas like Soho and Tribeca. For the most part, wealthy New Yorkers who were alert to contemporary design tastes and social values no longer modeled their residences on the palaces and manor houses of the European royalty; once au courant, those styles now seemed dull and passé. Donald J. Trump’s Manhattan high-rise home is a throwback to the time when the New York upper class was at the pinnacle of its power and wealth, and did not shrink from commanding others to do its bidding.