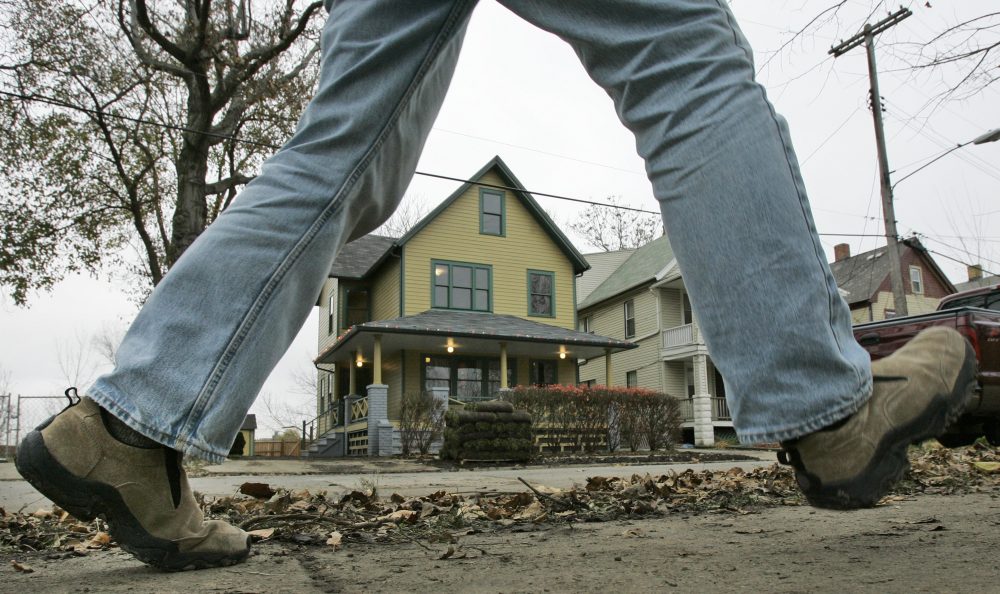 A pedestrian passes by a Cleveland home. Photo by Amy Sancetta/Associated Press.

This time of year, the swallows return to Capistrano, and I return to my birthplace, San Francisco, for the city’s annual pre-budget finance conference. For the last few years I have kicked things off with an economic outlook for the coming year, replete with a discussion of risks. This being San Francisco, naturally, I had to talk about the high costs of housing as one of the risks to continued economic growth.

On my way home, I thought of an SAT exam-like question. One of these things is not like the others: San Francisco, Cleveland, Hong Kong, Sydney, and Vancouver. I am going to take a wild guess and say that you, the reader, have chosen Cleveland.

You are right. But why? After all, Cleveland rocks, but just not in the same way as the other cities. One of the many ways it is different is in the cost of living. Demographia’s just-released 2017 affordability study has Cleveland as one of the most affordable cities for housing, and each of the other cities in my SAT question as among the least affordable.

This suggests something important about the affordability crisis that has not, but really should, enter the discussion of housing affordability: The cities that we find most attractive are cities where housing is “unaffordable.” In other words, the affordable housing crisis is not just about a lack of housing supply.

In my current city, Los Angeles, one hears over and over again that everyone is leaving because no one can afford to live here. This talk reminds me of the Yogi Berra homily, “Nobody goes there anymore. It’s too crowded.” Of course, exactly the opposite is true, and that truth is what should guide us in our housing policy.

The oft-made mistake is to suggest that housing is expensive because, as Demographia incorrectly puts it in their report, “Studies do not leave the slightest doubt that unaffordable housing is almost everywhere and every time caused by the same factor: housing supply restrictions.” Well, these “studies,” some of which are by very thoughtful people, leave plenty of doubt, and some of their authors ought to go back to Econ 101. Prices are not just a supply phenomenon but are rather an interaction between supply, what is available for sale, and demand, what people want to buy.

Clearly the people who live in San Francisco, Los Angeles, and other cities on Demographia’s list of cities with an affordability crisis could afford to live there. They just paid a larger portion of their income to do so. They could have moved to a more affordable place to live—Cleveland, for example. So those who say that housing prices are unaffordable are saying that, at lower prices, there would be more demand than supply. Let’s explore the implications of this.

Cleveland is so affordable because many people find it less desirable (think “lake effect” blizzards). Indeed, half the population of Cleveland left over the past 50 years. The housing stock is more than ample for the people who want to live there. Which reminds me of the time I interviewed for a job in Buffalo, New York, right after graduation. Part of the pitch was, “Buffalo is a great place. It is so depressed that you can afford a really good house.” Somehow this did not seem like an endorsement of a community I wanted to move to.

In my current city, Los Angeles, one hears over and over again that everyone is leaving because no one can afford to live here. This talk reminds me of the Yogi Berra homily, “Nobody goes there anymore. It’s too crowded.”  Of course, exactly the opposite is true …

The reason San Francisco is different is that it is a wonderful place to live. The scenery is spectacular, the climate mild, cultural amenities are abundant, and in a very short time one can be in the Sierra for some incredible winter sports or at Mavericks for world-class surfing.

Edward Glaeser, in his towering work on urban economies, The Triumph of the City, said “vitality makes people willing to pay for space.” Glaeser, like many other urban economists, argues for more building, but the point repeatedly made by those who study urban migration is that exciting innovation (documented by UC Berkeley economist Enrico Moretti), natural amenities such as beaches, mountains, and lakes (documented in the “superstar cities” study of Goyurko, Sinai, Mayer), and cultural amenities (as oft described by economist Richard Florida) attract people from declining to successful cities.

To be sure, San Francisco is not to everyone’s taste; some prefer the charm of a Louisiana bayou, and others the silence of a Minnesota winter. But given the housing stock, many more people want to live in San Francisco than can. An estimate in a 2015 paper by Moretti and the University of Chicago’s Chang-Tai Hsieh found that more affordable housing could increase San Francisco’s population by 100 percent or more. So there exists significant demand for San Francisco housing that a moderate change in zoning and building standards will not correct.

The population growth Hsieh and Moretti found means that today’s locals in places where people want to live are going to have to write a check for the infrastructure to support them. This is an old story in a place like California. In 1967, one of Ronald Reagan’s first acts as governor was to increase taxes dramatically, giving us Californians the highly progressive income tax system we enjoy today, and that Republicans everywhere rail against. The reason? Large-scale migration to the state had caused his predecessor, Pat Brown, to build infrastructure to support a burgeoning population, and as a result the state was running a structural deficit.

So what’s happening in San Francisco—or Seattle or Austin, or any number of popular places where the cost of living is rising—is the market system doing its thing. The market increases prices to ration the available land through the cost of housing. And people economize on their consumption of housing by living in smaller quarters, sharing with roommates, or stacking up generations. And for some, the price is not worth the value they would receive, and they leave. That is how any market rationalizes differences between supply and demand.

What about those who are squeezed out of California (such as my kids, who moved to Colorado)? The Dad in me says, “That’s horrible, I want them down the block from me.” But the economist in me says, “They do not value what Los Angeles has, relative to their life in a small town in Colorado, enough to sacrifice other things for it.” Resources, when scarce, are appropriately allocated according to their value to those consuming them.

And what about our schoolteachers, firemen, police, and city officials who struggle to live in the high-priced cities where they work? Here is the rub. When a place is really attractive and therefore really expensive—take Santa Barbara—many who perform valuable services live elsewhere, like in Ventura, 90 minutes away during rush hour.

Instead of wringing our hands about affordability in high-demand places, and trying to build enough to meet a worldwide demand that is difficult to satiate, we should be saying, “Great, we have a really successful city, but we also want to have a city with certain professional, service, and demographic characteristics,” and design housing policy targeted to that. For example, Santa Clara County built high-quality affordable housing that it rents to schoolteachers. It is a small program, but it is a good start. What doesn’t work are overly broad measures, such as directing developers to make 20 percent of their units affordable in exchange for building permits. Such policies generate homes for only a very few San Franciscans (while attracting ever-more newcomers who want to live there).

That is not to say we should ignore affordability. We definitely must pay attention to affordability, as we plan the cities we want to live in. But in doing so, we must pay attention not only to whether we have enough housing supply but also to the nature of the demand in places where people want to live. If we ignore demand, we risk creating urban nightmares—of crowding, traffic, long commutes, and ill health—in pursuit of a successful and affordable city.