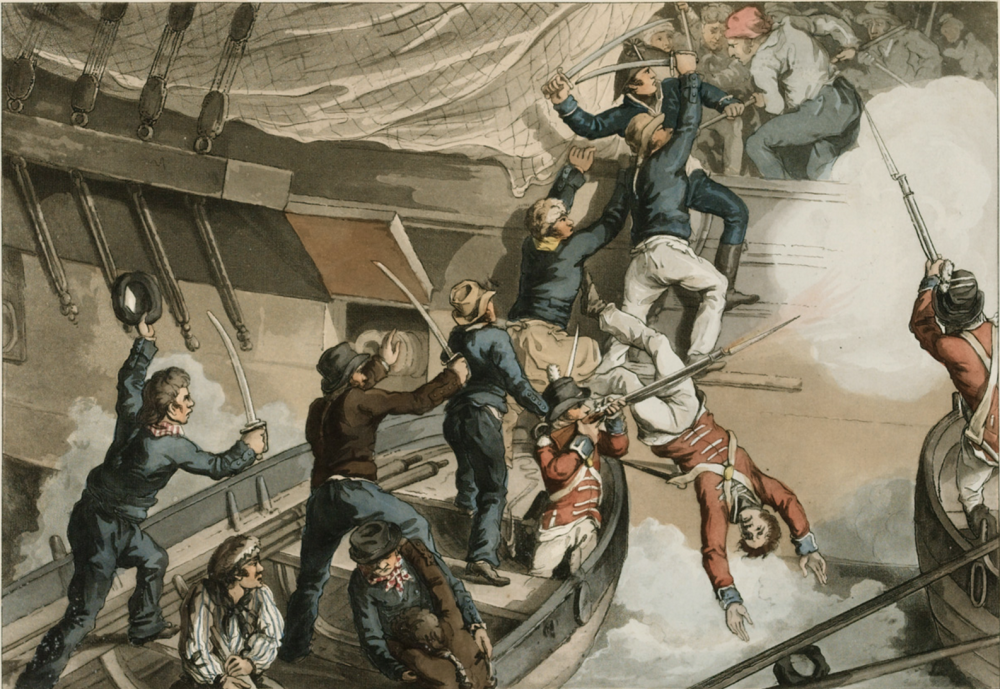 British sailors boarding a Man of War to recapture of the British Hermione in Puerto Cabello, Venezuela, two years after the crew had mutinied. Painting by John Augustus Atkinson; Fry & Sutherland; Edward Orme. Courtesy of the National Maritime Museum.

The United States has a special history, and thus bears a unique stake, when it comes to the flight of foreign refugees, particularly those seeking sanctuary from oppression and violence. Political asylum has long been a defining element of America’s national identity, beginning most forcefully in 1776 with Thomas Paine’s pledge in Common Sense that independence from Great Britain would afford “an asylum for mankind.”

Curiously, the nation’s decision to admit asylum-seekers was not a direct consequence of our Revolutionary idealism. Instead, the extension of political asylum owes much to a naval uprising—on a British ship—in 1797.

On the night of September 22, the bloodiest mutiny ever suffered by the Royal Navy erupted aboard the frigate HMS Hermione off the western coast of Puerto Rico. Stabbed repeatedly with cutlasses and bayonets, ten officers, including the ship’s sadistic captain, Hugh Pigot, were thrown overboard.

The mutiny thrust upon the administration of President John Adams a set of incendiary issues involving natural rights, American citizenship, and political asylum—a consequence of the purported presence of impressed (i.e. conscripted) American sailors aboard the Hermione and, in turn, the prospect of their extradition to Great Britain after seeking refuge in the United States.

The decade of the 1790s wasn’t necessarily friendly to asylum seekers. Although President George Washington favored a liberal immigration policy, limited to be sure to “white Europeans,” the French Revolution coupled with unrest in Ireland against British occupation contributed to a lapping tide of xenophobia in the early Republic, especially among leading members of the Federalist Party, who viewed England as a lone bastion of civil order in Europe.

Nativist fears crested with congressional passage in 1798 of the Alien Acts, which granted President Adams, as Washington’s successor, the power to deport émigrés without due process of law. Another Alien Act, in a thinly veiled attempt to deter immigration, extended the minimum period of residence from five to 14 years for prospective citizens. A Federalist representative from Massachusetts railed that he did “not wish to invite hoards [sic] of wild Irishmen.”

“Shall we refuse to the unhappy fugitives from distress, that hospitality which the savages of the wilderness extended to our fathers arriving in this land? Shall oppressed humanity find no asylum on this globe?”

In the summer of 1799, Adams ignited a political firestorm by authorizing a federal court in Charleston, South Carolina, to surrender to the British a seaman named Jonathan Robbins—a native son, he claimed, of Danbury, Connecticut, who had been impressed by the Royal Navy. The outrage was fanned in subsequent weeks by news from Jamaica of the sailor’s hanging, not as Jonathan Robbins, a United States citizen, but, the British claimed, as the reputed Irish ringleader Thomas Nash.

Although his true identity remained hotly contested, that did not put an end to the martyrdom of Jonathan Robbins. Mourned by Jeffersonian Republicans as a freedom fighter against British tyranny, the incident proved pivotal to Adams’s bitter loss to Jefferson in the monumental presidential election of 1800. The Robbins crisis also contributed to a dramatic shift in United States immigration policy.

In his first address to Congress, on December 8, 1801, President Jefferson pointedly invoked America’s messianic pledge to afford a haven for persecuted refugees. In stark contrast to the nativism of the Adams years, he demanded, “Shall we refuse to the unhappy fugitives from distress, that hospitality which the savages of the wilderness extended to our fathers arriving in this land? Shall oppressed humanity find no asylum on this globe?”

For 43 years after the extradition of Robbins, not one person, citizen or alien, would be surrendered by the federal government to another country, including other mutineers from the Hermione. And when the United States finally signed an extradition agreement with Great Britain in 1842 as part of the Webster-Ashburton Treaty, “political offenses,” including mutiny, desertion, and treason were exempted from a list of extraditable crimes in order to avoid reviving the “popular clamour” of the Robbins controversy.

In subsequent treaties, political offenses would also remain exempt from extradition, as they would in Congress’ first extradition law (1848). That was the point at which political asylum became the express policy of the United States, a major legislative achievement in helping to fulfill the promise of the American Revolution. And in agreeing to extradition agreements with additional nations, the United States significantly promoted the doctrine of political asylum not only at home but also abroad.

The U.S. has not always lived up to these ideals, or these laws. Too often in recent decades, foreign policy priorities have influenced asylum decisions, with preference openly extended to a handful of nationalities (such as Cubans fleeing the Castro regime). Like other federal tribunals, immigration courts should function as part of the judiciary—not as an extension of the executive. After all, it was Adams’ 1799 authorization that a federal judge extradite Jonathan Robbins that touched off the fierce backlash against his presidency.

This political crisis led to a tradition of political asylum that predates the Statue of Liberty’s famous affirmation that foreign nations send “your tired, your poor, your huddled masses yearning to breathe free.” It would take the martyred Jonathan Robbins, and another 50 years, but political asylum’s establishment in 1848 effectively enshrined Tom Paine’s promise in 1776 that America would be a beacon of liberty for victims of oppression and violence.