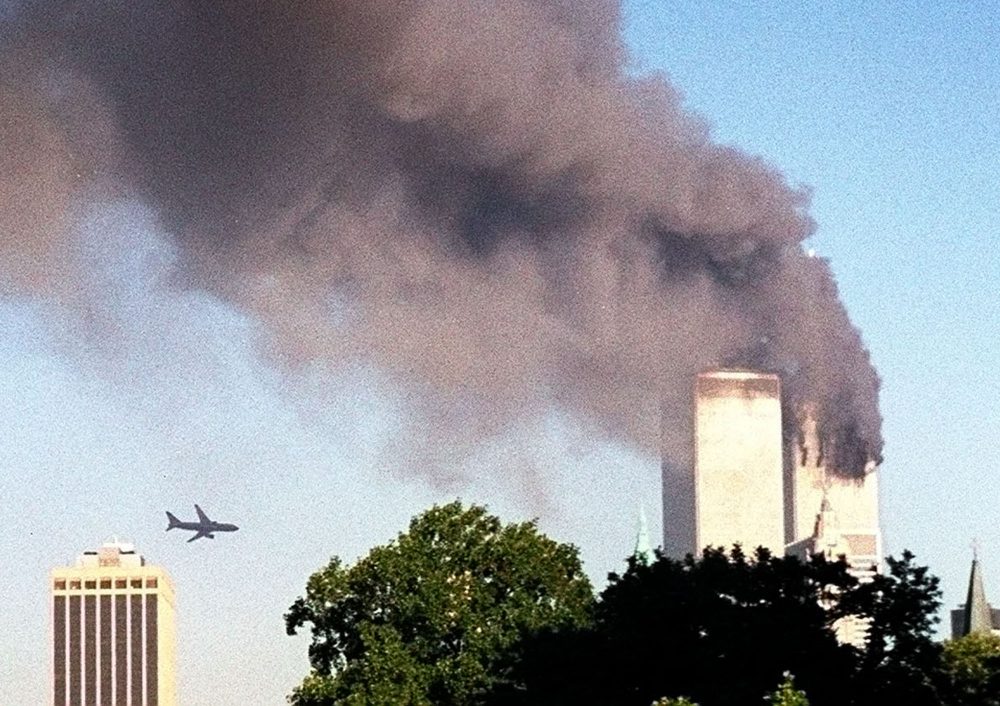 A hijacked plane carrying scores of passengers approaches New York's World Trade Center moments before it struck the tower at left, as seen from downtown Brooklyn, Tuesday, Sept. 11, 2001. Access to the internet and flight simulators made it possible for terrorists to topple the World Trade Center, hit the Pentagon, and cause billions of dollars in damages. Photo by William Kratzke/Associated Press.

It seems highly reckless to prod into flight Hegel’s Owl of Minerva—the goddess of wisdom and war—for an assessment of war in a cyber age that is barely 30 years old.

You will not find it in the Oxford English Dictionary, but “cyberwar” made its first inauspicious appearance in 1987 when an anonymous editor from Omni—Bob Guccione’s other magazine—attached the neologism as a title for an article by Owen Davies, an Omni editor. Although he never used the word or developed the idea of cyberwar, Davies pretty much nailed the coming of robotic warfare.

But something was in the air. In 1987 and avant la lettre, cyberwar in the narrow sense of an attack by malicious code on a computer system, communications network, or critical infrastructure, had a more plausible debut as the “Jerusalem virus” aka the “PLO virus,” a logic bomb that would pop up on any given Friday the 13th. Top that, Jason.

The next recorded use of “cyberwar” was in 1991. A young academic steeped in too much William Gibson and Bruce Sterling, after watching way too much of the 24/7 coverage of the first Iraq war, delivered a paper at the Second Annual Cyberspace Conference in Santa Cruz California: “Cyberwar, Videogames and the Gulf War.” Shortly afterward he was asked by the short-lived PBS television show Late City to distill the 100-hour TV war into a two-minute video buzz clip (set to Sweet Bird of Truth by The The). He gave the concept its first definition: “a new virtual and consensual reality, the first cyberwar, in the sense of a technologically generated, televisually linked and strategically gamed form of violence.”

Both were promptly forgotten. I took some solace in Nietzsche, who said only that which has no history can be defined.

But then history responded with a vengeance: Just about every major war since Iraq had a cyber edge to it. To be sure, acts of primal if not always organized violence would continue—all too often in the name of creation myths that would not be out of place in the Stone or Bronze ages—on a daily basis by and against tribes, nations, and superpowers.

Many of these acts of organized violence continue to fit the classical definitions presented early in the 19th century by the Prussian Carl von Clausewitz, who variously defined war as a duel on a larger scale, a forceful act to compel others to do our will, and a continuation of politics by other means. The contemporary landscape of world politics is littered with casus belli that would not be unfamiliar to Clausewitz, or for that matter, to his eminent precursors like Machiavelli and Hobbes, who identified wars of gain (produced by imperial, economic, and military struggles for dominance), wars of fear (prompted by perceptions of a rising power or threatening evil), and wars of doctrine (caused by the clash of monolithic faiths and universalist ideologies).

But Al Qaeda, ISIS, and other non- and wannabe-state actors keep crashing the Westphalian system. Today’s new warriors intent on challenging the state’s monopoly on violence—like the insurgent, jihadist, or private militia—are not that far removed from their earlier counterparts, like the pirate, mercenary, and holy crusader. Even the guerre du jour of “hybrid war,” the corrosive mix of private criminality, public bellicosity, and authoritarian politics that scars the residual borders of the Cold War, has more than a hint of the medieval in the interplay of overlapping sovereignties, polymorphous combatants, and clashing cosmologies.

As everything and everyone becomes connected, it’s very hard to confine cyberwar to a discrete place or bounded time. A few clicks, several thousand shares, and an incident escalates from a local to regional to international crisis.

As long as global violence remains a viable, sometimes the only option in the face of intractable political differences, social injustices, and cultural struggles for recognition, war in one form or another will find a way. States, democratic or not, might be less inclined to initiate violence, but non-, para-, and anti-state actors have proven to be willing as well as able to use networked technology to wage asymmetric warfare—which in turn prompts over-reactions by states and furthers cycles of mimetic violence.

Classical war persists, as does the effort by new actors to offset disadvantages through new technologies. Even Clausewitz, ever the dialectician, acknowledged that “every age had its own peculiar forms of war, its own restrictive conditions, and its own prejudices.”

What is most peculiar about war in a “cyber age?” Depending on whether one goes back to the Greek (kubernētēs or “steersman”), Norbert Weiner (“cybernetics,” 1948), or William Gibson (“cyberspace,” 1984), “cyber” suggests everything from a control system with a feedback capacity, to a technologically-induced consensual hallucination, to a 400-pound hacker (pace Trump) subverting the U.S. elections.

Dating the cyber age is no easier. Someday archeologists will sift through the ruins of Bell Labs, find wire etchings in germanium and silicon and declare 1947, give or take a year, as point zero, from which microprocessors, packet switches, and fiber optics as well as digital code, information theory, and networked systems soon followed.

However, science will not capture the ghost in the machine. For that, we best go back to the originating myths. Cyber is, literally, as old as the Bible and other holy texts in which gods “steer” or “govern” the universe. In the Judeo-Christian version, those “who have no direction (kubernēsis) fall like leaves” (Proverbs 11:14); those who prosper understand that “with strategic planning (meta kubernēseōs) war is conducted” (Proverbs 24:6). Leaping a millennia or two forward, our techno-deities might not be as omniscient or omnipotent as past gods; but, weaponized and sanctioned by national security, they deter, disrupt, and if necessary destroy our enemies with relative impunity to us. Obama got religion, ordering 10 times the number of drone attacks executed by Bush; barely two months in office, President Trump increased them by another 432% over Obama.

Perhaps the most peculiar characteristic of war in a cyber age is how well it resists the traditional restrictions of warfare. As everything and everyone becomes connected, it’s very hard to confine cyberwar to a discrete place or bounded time. A few clicks, several thousand shares, and an incident escalates from a local to regional to international crisis. This is the force-multiplier effect of the cyber age, with 9/11 as the most seminal and inspirational example. Access to the internet and flight simulators made it possible for Osama bin Laden and 19 kamikaze fanatics to topple the World Trade Center, hit the Pentagon, kill nearly 3,000 people, and cause billions of dollars in damages (trillions if we include second-order effects, like the Iraq War and the rise of ISIS).

If there is a prejudice to war in the cyber age, it can be found in the conceit that virtualization makes war more virtuous. Rather than resorting to the convention of bombs, the United States and Israel inserted the Stuxnet virus to degrade the Iranian nuclear weapon program; no matter that the virus proved to be less than a precise munition and rapidly spread to non-targeted industrial platforms. Wikileaks hacked thousands of embassy cables to make U.S. diplomacy more transparent and democratic; no matter the collateral damage done to alliances and coalition efforts to restrain anti-democratic regimes. Drones pursue a cleaner kill; no matter the virtual terror induced upon whole populations.

Thirty years on, I think it is safe to say that we have not seen the worst of war in the cyber age. With so many networked actors operating simultaneously across multiple levels of power, prediction, pre-emption, or restriction of cyberwar is exceptionally difficult. Distinguishing intentional from accidental acts is hard. Knock-on effects will grow.

The cyber advantage might now go to the most technologically advanced powers, but the law of uneven development gives latecomers the edge. Which is why we should be asking now, before rather than after the Owl of Minerva takes flight at dusk, what war will look like in the quantum age.