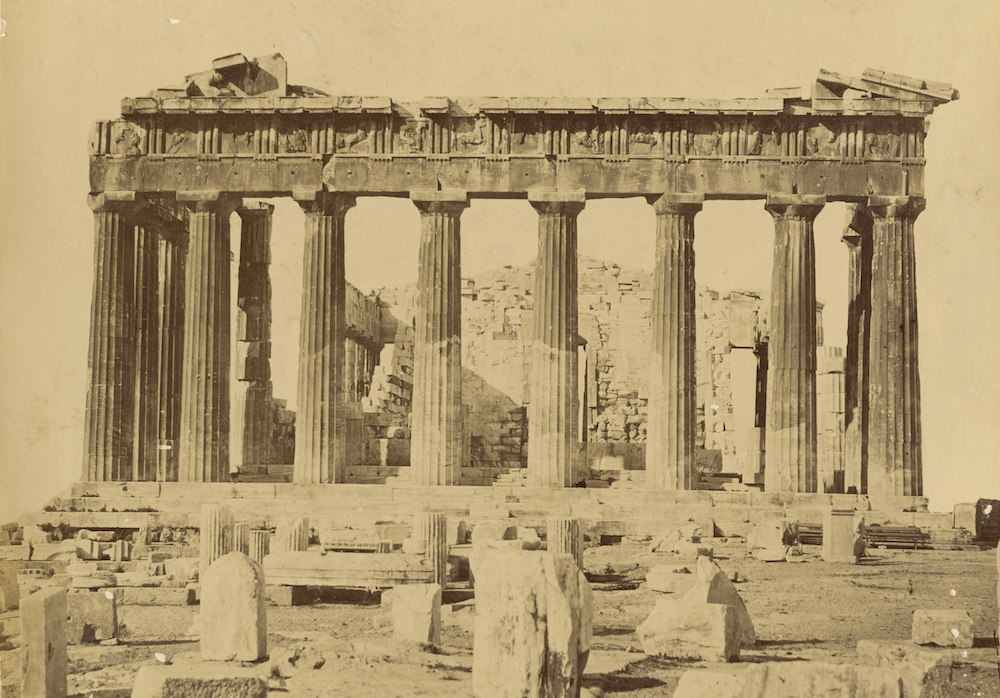 Even though the United States is worlds away from ancient Greece, we still sometimes use the Greeks’ vocabulary for describing immigrants and our fear of them. Like the ancient Greeks, some of the more xenophobic among us decry foreigners as “barbarians.” The Greeks named non-natives barbaroi because foreign languages to their ears sounded like bar-bar-bar. The term carried a lot of baggage: Barbarians were ruled by despots and often viewed by Greeks as servile and effeminate. By contrast, the Greeks—or at any rate the most famous of the Greeks, the Athenians—imagined themselves to be manly democrats.

The fact that “barbarian” survives intact in modern English suggests that we still tend to see foreigners in a negative light. Controversy over immigration, that is, connects our time to that of the ancient Greeks. But as a professor of classics at the University of Colorado, Boulder, I hear deeper, and very different, echoes. If we read Greek culture correctly, it’s not just bequeathing us a hatred of foreigners. Rather, it offers peculiar contradictions in its attitude toward immigrants, which reveal a lot about the contradictions and myths of our own country and time.

The most interesting attitudes come from Athens, since Athenians wanted to think of themselves as sophisticated, worldly, and welcoming of immigrants. In a famous speech, the historian Thucydides has the political leader Pericles characterize the Athenians as a people whose city-state is open to the world even though, he explains, such unhindered openness may allow the enemy to profit from state secrets. This in contrast with Spartans, who are represented by Pericles as close-minded and unsophisticated.

But Athenians also had an origin myth that helped them to distinguish themselves from foreigners—a story of autochthony, or being born from the earth. Athenians said that Hephaestus (or in some versions, Poseidon) wanted to have sex with Athena. Athena, however, was an eternal virgin, so Hephaestus’ desire could not be satisfied. He tried anyway and ejaculated onto Athena’s leg. Athena wiped off the semen with a piece of wool and threw the wool onto the earth. Earth, harboring the sperm, nurtured a baby to term and then handed the child over to Athena to rear. He became the first king of Athens. In the myth, all Athenians are descended from him and other ancient kings also imagined to be born of the earth. Since ancient kings created institutions, like marriage and the Panathenaic festival (an important civic festival in honor of Athena), civilizing customs were also closely tied to the land.

At first this origin story sounds profoundly alien to American ears accustomed to tales of Thanksgiving day feasts involving maize, or of Grandma landing at Ellis Island with nothing but a samovar. Yet we have our own version of American autochthony in current claims that some citizens are “real Americans,” with deep roots in their native soil, and some are not. We also pride ourselves on openness, like Pericles in Athens, saying that we are a “nation of immigrants”—while also making sure to distinguish the “real” citizens from supposedly illegitimate ones.

Athens’ dirty secret, which wasn’t much of a secret, was that it depended on foreigners to do things Athenians didn’t do. In and around Athens there were tens of thousands of resident foreigners, known as metics. Some were non-Athenian Greeks. (Since there was no Greek “nation,” and Greeks instead identified with their city-state, Athenians considered all Greeks who weren’t from Athens to be foreigners.) Others were economically motivated Egyptians, Thracians, and Phoenicians, as well as many people from an area that lies within present-day Turkey (Phrygians, Lydians, Scythians). Metics had a citizen sponsor, registered with the authorities, and paid taxes. They received some legal protection, but they did not enjoy full citizen rights, such as voting and owning land.

Metics had occupations that were thought to be un-Athenian, like trade and commerce. A common smear of them was that they did not care about the state, but about themselves and their own personal gain. Metics are described in comedy as dishonest. Sound familiar?

Athens’ dirty secret, which wasn’t much of a secret, was that it depended on foreigners to do things Athenians didn’t do.

One funny thing about these supposedly dishonest and disloyal workers is that the word metoikos includes the word oikos, “household,” which indicates the most intimate part of Greek life. The prefix meta could mean either “with” or “change,” so metics were “livers with” or “changers of households.” In practice, Athenian metics were not necessarily connected to the household, though they could be—women might be employed as wet-nurses. But today we can see a (different kind of) connection between immigrants and the oikos in immigrants who make their living by cleaning houses or working in childcare.

For me, though, the most interesting lesson of Athenian immigration is not the conjunction of openness and autochthony, or the reliance on foreigners. It’s the way Greek tragedies treat foreigners as both dangerous and magical, strange but offering mythic powers to the city-states who manage to keep them.

Tragedies were staged at the annual Great Dionysia festival, which was more like a State of the Union address than a Broadway play. The festival played out with pomp, circumstance, and celebration of Athenian ideology. Before the performances began, tribute from Athenian allies (or Athenian subjects, depending upon your perspective) was brought into the theater. The names of those who had benefited the state were read, and war orphans who had been raised at state expense were paraded before the crowd. From this psychologically comforting perch, Athenian citizens watched tragedies about terrible dysfunction (like a wife who kills her husband when he comes home from war) and ideas that conflicted with Athenian ideology. But they also watched tragedies that celebrated Athens as a highly functional polis, a place where difficult problems are set right.

In these latter plays, foreigners could be depicted as almost magical. In Sophocles’ tragedy “Oedipus at Colonus,” the formerly accursed king Oedipus is a “foreigner” from Thebes who arrives in Colonus, a small town on the outskirts of Athens; he is so unfamiliar with its customs that he walks right into a sacred grove. When elders appear shouting—“You cannot walk there! That space belongs to goddesses!”—Oedipus explains that he is an exile and that he would like to be admitted into their community. At first he does not tell them his name; when he finally does, the elders are horrified. Oedipus killed his father and slept with his mother. His actions are utterly barbaric.

Yet, over the course of the play, the elders teach Oedipus how to act properly in Colonus, because a prophecy from the god Apollo has indicated that if they get his body after his death it will offer protective powers. They give him detailed instructions about how to perform a ritual to appease the goddesses he has offended; they sing a sorrow-filled song together with him, in which they mourn for his traumatic past. When the king, Theseus, appears, he immediately announces that he will allow Oedipus to dwell in the land. Oedipus, for his part, explains that he is going to be a “savior” for the Athenians, because his dead body will offer them military protection.

Aeschylus’ “Eumenides” features a different sort of scary outsider–the Furies, a band of goddesses hell-bent on vengeance. The Furies are not easygoing ladies. They are terrifying, Gorgon-like creatures that slurp the blood of humans; Apollo describes them as monsters who belong where beheadings and eye-gougings take place. When they first arrive in Athens, they insist that they are going to bring a plague on Athens and destroy the land and the people. But by the end, persuaded by the goddess Athena, they agree to go beneath the earth, live there, and bring blessings. Donning the crimson robes of metics, the Furies become Kindly Ones (Eumenides). Like Oedipus (though different because he dies and they are immortal goddesses), they are incorporated into Athens in order to protect the polis.

Both of these plays suggest that integrating the most frightening of foreigners offers safety and protection—even military protection—for a powerful city-state. They also demonstrate that the polis can handle and even neutralize the potential threat of foreigners via its rules for accepting exiles and its well-run court system. In this way, Greek tragedies taught Athenians that their institutions could help the whole population benefit from the presence of foreigners. Institutions could take the worst—a man who had married his mother and killed his father, or those loose-cannon goddesses—and not only train them to be model citizens, but make them pay a dividend!

Until very recently, this was the story America told itself, and it has paid well: 51 percent of the country’s billion dollar tech startups were founded by immigrants. Rich American men have brought more than one good luck charm Slovenian model home to the pent-oikos. At the heart of successful, aggressive states is a paradox: They need a distinct identity and they need lots of merchants and wet nurses and “barbarians” to make the state more powerful. How they solve that paradox is how history remembers them.