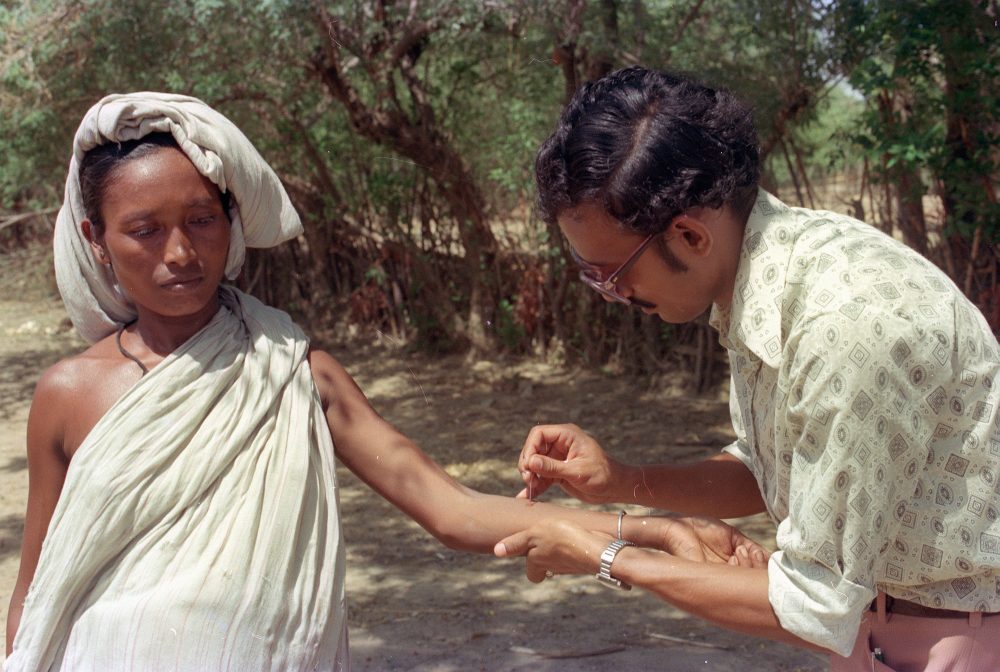 A woman receives a vaccination against smallpox as Indian medical teams arrive at Hakegora village to inoculate people, June 12, 1974. Photo by Associated Press.

It once was stated that “man’s weakness is not achieving victories, but in taking advantage of them.” Indeed, this is the case for global infection control. Throughout history we have so far eradicated only a single major infectious disease threat, a feat accomplished through the leadership of Dr. D.A. Henderson, who passed away in 2016 at the age of 87.

Beginning in 1966, Henderson led a global effort based at the World Health Organization (WHO) to accelerate smallpox vaccinations. In an extraordinary campaign that required vaccinating people in the poorest and most remote areas of the world (and detailed in his book Smallpox: The Death of a Disease), the disease vanished, with the last known naturally transmitted case of smallpox occurring in 1977.

Ever since, we have made great strides in the global control of infectious diseases, and even progress towards disease eradication, but frequently the endgame has been disrupted by an unexpected turn of events. In a recent book, I estimated that most of the world’s poverty-related neglected diseases are paradoxically found in the G20 nations. There are at least a half dozen diseases for which disease elimination or eradication would be feasible were it not for war or national turmoil, political malaise, or a growing anti-vaccine movement.

Some of the most dramatic examples of game-changing disruptions in disease control have been noted for human parasitic and tropical infections. During much of the 20th century, tremendous strides were made in the elimination of the highly lethal Gambian form of African sleeping sickness (human African trypanosomiasis or “HAT”) through a combination of case detection and treatment and tsetse fly control. Many of the methods used to wipe out sleeping sickness were developed by Dr. Eugene Jamot, a French physician working in Cameroon who pioneered the use of portable and movable treatment teams during the early 20th century.

By the 1960s, Gambian HAT was near elimination in many African nations. But when hostilities and civil and international conflicts broke out in Angola, Democratic Republic of Congo, Sudan, and elsewhere, public health control was interrupted, so that by the 1990s the incidence of HAT had returned to pre-Jamot era levels. More recently, as tensions have eased and mass treatment and tsetse control efforts have been reinstated, we have seen a 73 percent reduction in deaths from HAT between 1990 and 2010. With only about 10,000 cases of HAT remaining, we may still yet see the global elimination of this deadly disease.

Next to war and political instability, probably the next most corrosive factor thwarting public health gains against infectious disease is simple absence of political will.

War, conflict, and political instability also have halted or interrupted other global efforts to eliminate or eradicate parasitic diseases. Breakdowns in health systems in Venezuela are resulting in resurgences of malaria and Chagas disease. Public health disruptions from the ISIS occupation of Syria and Iraq have allowed the number of cases of cutaneous leishmaniasis, a disease transmitted by sandflies and often associated with a disfiguring ulcer on the face, to skyrocket and spread into neighboring countries. The only good news is that although wars in the Sudan almost derailed global guinea worm eradication efforts led by the Carter Center, the Centers for Disease Control, and WHO, through the perseverance of these organizations, this disease may soon become only the second disease ever eradicated .

Next to war and political instability, probably the next most corrosive factor thwarting public health gains against infectious disease is simple absence of political will. During the 1950s and ‘60s, under the auspices of the Pan American Health Organization, an ambitious effort to control yellow fever and dengue resulted in the eradication of the Aedes aegypti mosquito in more than a dozen Latin American and Caribbean countries. But lapses in mosquito control efforts and other factors allowed Aedes aegypti to reestablish, resulting in the reintroduction of dengue into the region during the 1980s. Now yellow fever has returned to Brazil, where it could gain access to Aedes mosquito populations and threaten urban centers.

Perhaps the most disheartening examples of infectious disease control going off the rails are instances in which there are deliberate attempts to block vaccination efforts. Today, the transmission of polio has been halted everywhere except in Afghanistan and Pakistan (and before that northern Nigeria) due in part to concerted efforts by religious extremist groups to kidnap or assassinate vaccine workers.

And now in the United States and Europe we have anti-vaccine groups who allege links between vaccines and autism, despite massive scientific data showing conclusively there are no links or even any plausibility for vaccines causing autism.

A particular concern is the resurgence of measles, because it is one of the most contagious of all the vaccine-preventable diseases and often is the first to re-emerge following a decline in vaccine rates. But really any one of the major childhood illnesses targeted for vaccination could re-appear. Measles was eradicated in the United States in 2000. However, it returned to California in 2015, and now the state of Texas is especially vulnerable because tens of thousands of children are not being vaccinated for non-medical exemptions. Globally, between 1990 and 2010 there has been an 80 percent decline in measles deaths and for the first time the number of young children who die of measles globally has dropped below 100,000. However, there are concerns that an American-led anti-vaccine movement could now derail this achievement and possibly even lead to a reversal of sustainable and global goals for health and poverty reduction.

We need a concerted effort by global leaders to close current gaps and explore final steps to eliminate our great plagues. To do so will require international cooperation by the WHO member states, especially the 20 wealthiest economies comprising the G20 nations. Taking on the considerable political and social hurdles will become one of the great international challenges in freeing populations from the tyranny of epidemics or pandemics.