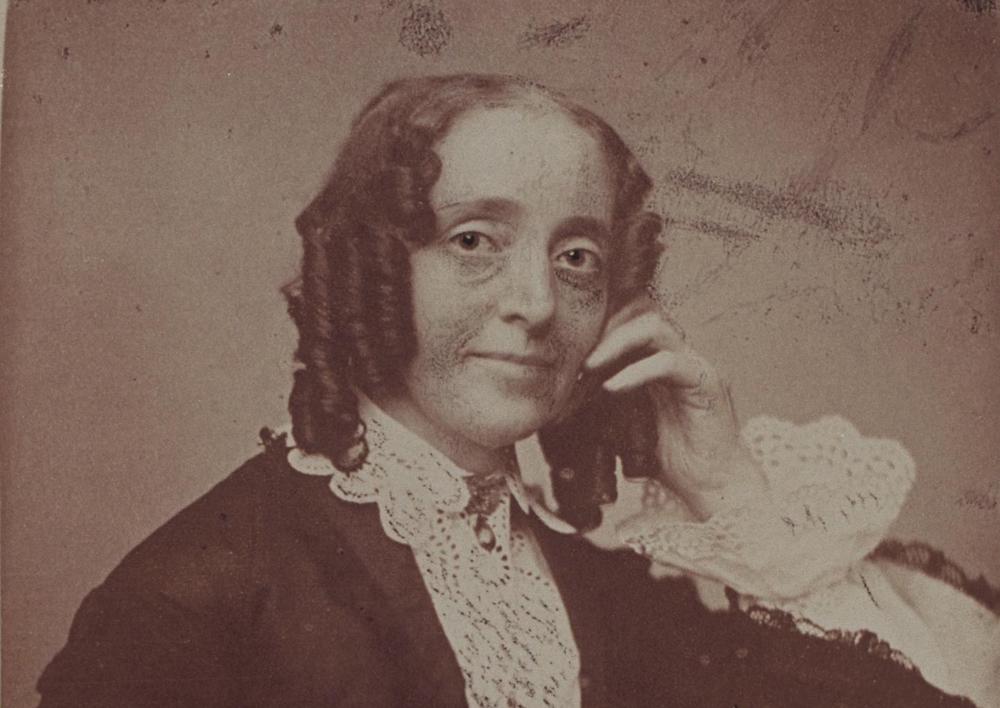 A photograph of Ernestine Rose, probably dating to the 1850s. Rose, who is not familiar to many Americans today, was famous in her time. Image courtesy of the Schlesinger Library on the History of Women in America, Radcliffe Institute, Harvard University.

On May 22, 1869, at age 59, the famous activist and orator Ernestine Rose became an American citizen in her own right.

Her decision to do so, at such a late stage of her life, was paradoxical. Rose had long admired the United States, working ardently to make it a better place whenever it fell short of its promise. Legally, she had been a citizen since the 1840s, when her husband, the English silversmith William Rose, became an American: Throughout Western countries at the time, wives assumed their husbands’ nationalities. The Roses were just 17 days from leaving the U.S. for Great Britain, perhaps just for a voyage, perhaps to resettle there. They hadn’t yet determined if they would return.

So why file for citizenship then? As I see it, Rose’s decision mirrors a broader ambivalence that she had about her American identity. Both an internationalist and a passionate citizen, she coupled a deep commitment to fighting for women’s rights, the abolition of slavery, and free thought in the United States with lingering skepticism about the country’s devotion to its ideals.

Rose had embarked on an immense journey to become an American activist. Born in 1810 as the only child of a Polish rabbi, she grew up in an Orthodox household but soon began to question her Judaism. When she was 15, her mother died, leaving her an inheritance. To “bind me closer to the bosom of the synagogue,” Rose later recalled, her father betrothed her to a man she did not want to marry, stipulating in a contract that if she did not go through with the ceremony, her fiancé would receive her mother’s money. She hired a sleigh, travelled 60 miles to the nearest circuit court, and successfully pleaded her case. When she returned home, she found that her father had remarried to a girl her own age. She gave him some of her inheritance, and then left Poland, her family, and Judaism forever.

She lived for two years in Berlin, then in Paris, and in 1831, when she was 21, moved to London. There she found a surrogate father, the industrialist-turned-socialist reformer Robert Owen. Owen believed that evil and crime were caused by social conditions, and that if education were improved, poverty reduced, and criminal punishments more carefully applied, the world could be transformed. Owen also rejected all religious beliefs. His new follower delighted in his creed. In the Owenite movement, she encountered the notion of female equality, made her first speeches, and met her adored and adoring husband. In 1836, the couple immigrated to New York City, where they lived for the next 33 years.

Ernestine Rose had long had an idealized view of her new home. “I remember I was but a little child, hardly able to understand the import of words,” she recalled, “that I had already listened to them who pronounced it the Republic of the United States of America … and I thought, if I live to grow up a woman, O how I should like to see a Republic!”—that is, a government without a monarch. Rose loved her first Fourth of July here: “The sun shone brighter; the trees looked more beautiful; the grass looked greener; the birds sang sweeter; all the beauties of nature became enhanced in my estimation, for I viewed them all through the beautiful rainbow colors of human freedom,” she said. If she had left the U.S. on the 5th of July, she added, she would have retained that positive view, but by staying longer she began to see the gap between American ideals and reality.

In the deeply Christian United States, she was an outspoken atheist … At a time when the abolition of slavery was controversial, she lectured in support of it. And in a society where women could not vote, hold office, or, if married, own any property, she ardently worked for women’s rights.

Ernestine Rose rapidly became involved in three radical causes which aimed to emancipate Americans: the abolition of slavery, women’s rights, and free thought, which espoused the rejection of traditional religious beliefs. In the deeply Christian United States, she was an outspoken atheist, a position offensive to many. At a time when the abolition of slavery was controversial, she lectured in support of it. And in a society where women could not vote, hold office, or, if married, own any property, she ardently worked for women’s rights.

Completely supported by her husband, Rose used his income, plus the money they saved by not employing a servant, to finance numerous lecture tours, travelling to 23 of the 31 existing states before the Civil War. By the 1850s, she was a well-known public figure, far more famous than her allies Elizabeth Cady Stanton and Susan B. Anthony.

Yet Rose was almost always identified as a “foreigner,” both by herself and by others. “Poland is my poor, unhappy country,” she declared in 1849, 13 years after arriving in America. Her allies often commented on her accent and called her “the eloquent Pole.” She was the sole non-native-born person in the early women’s rights movement. She was also one of the few Jews in America then—only 150,000 lived among a general population of 31,500,000.

Once her disappointment with America set in, it never fully abated. In 1854 she explained that, “I chose to make this country my home in preference to any other because if you carried out the theories you profess, it would be the best country on earth.” But as time went by, the only one of Rose’s causes which found success in her lifetime was the abolition of slavery. After the Civil War, the women’s movement divided over the 15th Amendment, which granted black men, but not women, the right to vote. “We have proclaimed to the world universal suffrage, but it is universal suffrage with a vengeance attached to it,” Rose often asserted. “White men are the minority in this nation. White women, black men, and black women compose the large majority.” By 1869, when she and William decided to return to England, free thought was in deep decline and women’s rights had stalled.

Disillusionment underlay her ambivalence about the United States and was also reflected in how she identified. Always calling herself a Pole when in America, she repeated that claim in London, where she stated that although she had lived in America, “I am not an American.” From her teens, when she had questioned Judaism, she had seen herself as an outlier. I believe she became most comfortable with that oppositional stance: a Pole among Americans, an atheist among Christians. She often described herself, approvingly, as “a minority of one.”

Old age shifted her perspective. In 1878, comfortably settled in London, she criticized both England and the United States for presenting “obstacles to free thought and free speech” and not having achieved true “liberalism.” But she also praised the United States for having neither a monarch nor a state church. Near the end of Rose’s life, in 1889 when she was 79, a reporter who visited her observed that “her fine face is lighted up when she speaks of America, of which she is proud to own herself a citizen, and recalls the memories of the days when her voice was a trumpet-call to the soldiers of freedom.”

Ernestine Rose was an internationalist and ambivalent American whose life contributed greatly to this nation’s history. Her conflict over being an American mirrors that of many idealistic immigrants to this nation. Like them, she believed in self-determination and the ability to reform the United States. She deserves to be better remembered.