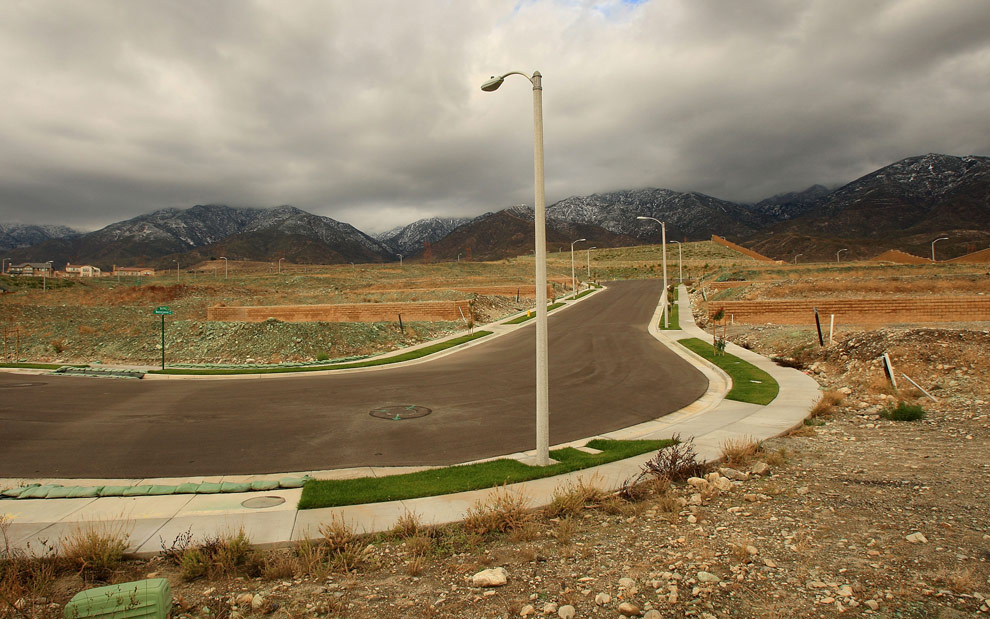 The need for more infrastructure is one of the few areas of genuine bipartisan consensus in the United States. But my experiences working in two rapidly urbanizing regions outside this country have led me to wonder whether there may already be too much of it.

Infrastructure is a double-edged sword. For every case in which it is desperately needed, there is another case in which it enables the rapid proliferation of urban expansion and its domino effect of deleterious land use practices.

One project in Ecuador, with which I’ve been involved over the past decade, allowed me to consider how to stem the detrimental effects of sprawl by decommissioning existing infrastructure rather than investing in more of it. Another, in Haiti, led to a rethinking of how public services might be delivered in a measured, more tactical manner that encourages consolidated, not expansive, growth. One might call it min-frastructure.

In recent decades however, the desire for more planned and efficient development (from flows of water to waste and power systems) has meant that infrastructure often comes first, in order to create the market for urbanization. In this way, it increases the value of land to make development possible—thereby becoming a tool of real estate speculation. The unintended consequences of this infrastructure-first approach can be huge. After infrastructure and a first generation, planned development are put in place, an “echo” effect of uncontrolled growth often follows, eventually exceeding the capacity of those original services.

The infrastructure-first model has also proven increasingly difficult and risky to implement. Onerous processes of appropriations, approvals, bidding, and oversight have made the public sector incapable of delivering projects without embarrassing scheduling and cost overruns. (Think of California’s high-speed rail.) In response, government overseers have resorted to piecemeal or pay-as-you-go methods of execution—a symptom not simply of mounting government deficits, but of taxpayer distrust. 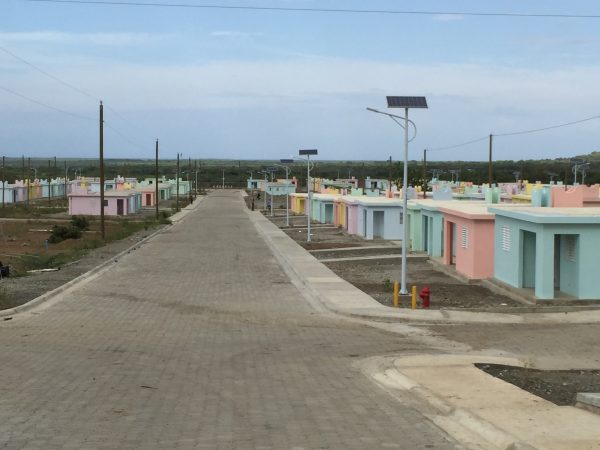 The effect has been to lessen the appetite for investment in public works, and to raise doubt about the efficacy of the idea of infrastructure as an extensive, world-building instrument. Rising in its place is a new model, more localized in scale and reach. Instead of the massive service network designed to irrigate expansion, this new approach is geared toward treating specific needs.

I first came across the idea of a measured, “battery-powered” infrastructure in Providencia, a new town designated for development by the Ecuadorian government in the Amazon. It’s in a spot where eco-logic dictates there shouldn’t be a town at all: along the Napo River across from Yasuni National Park, one of the most bio-diverse patches of the planet. But Providencia is being planned in association with a newly-completed port: part of a new, South American-financed river-transport axis to speed the export of resources extracted in the Amazon from Manaus, Brazil in the east (upriver and across the Andes) to the Pacific port of Manta (and then onto Asia).

The new town is located amid indigenous communities, colonist farmer cooperatives and multi-national oil drilling concessions. The region, called Yamanuka, has been steadily deforested over the last three decades, beginning with the clearing of service roads to drilling sites. Those roads in turn opened the door to the unplanned branching, or “fishboning,” of new, unpaved streets by colonists seeking to reap profits through land speculation related to the imagined success of the port. During the long and slow completion of the latter, those speculators bided their time with subsistence farming, absent access to the most basic of utilities and social infrastructure.

The plan for Providencia is designed to reverse this trend. Instead of building infrastructure first, it starts with identifying where not to build. Existing forest is declared off limits, its edge establishing a natural barrier and shape for the town. This not only protects the forest, but reverses the previous pattern of development. It also engenders desirability, creating an interest in Providencia among those who previously colonized and deforested the hinterlands. Infrastructure is deployed tactically, offering a fuller range of services within a more confined area—a “luxury” for those living in the town. Access to utilities (clean water, sewerage, electricity, gas, and wifi/cellular reception) is complemented by a social infrastructure that includes a regionally-scaled market (a larger sales platform); an eco-hotel offering higher-quality jobs, education, and recreation facilities (including daycare for the many woman-owned cooperatives that populate the area); and access to quality healthcare.

To accomplish all of this, the planning team (of which I was a part) employed a soft form of infrastructure known as Transfer of Development Rights (TDR). Normally used only in areas of high land cost and density, TDR is a land-use gambit that enables a swap of ownership and rights to property. A push to the pull of Providencia’s desirable scarcity, TDR enables owners of outlying properties (or fincas) to forfeit their claims in the forest in exchange for the right to move into Providencia and enjoy its access to superior municipal services and a growing eco-tourist market.

The fincas are then sold back to the State and returned to public control, where they are reconsolidated into larger tracts. This in turn enables the land to be collectively farmed—now according to principles of agroforestry, a form of reforestation that combines agronomy with forestry, through the mixing of differing combinations of species whose proximity to one another reflexively accelerates productivity. The consolidation of plots also enables the removal, or “deboning” of the fishbones of roads whose proliferation is associated with deforesting activities. All but the most necessary of these rights-of-way are removed; the remaining ones constitute only the necessary links in the new global transport axis through the region. It also preserves the indigenous economy’s supply chain, connecting locally-owned micro-enterprises to the market. In this way, the plan for Providencia enables the indigenous economy to ride the coattails of the global economy through its proximity to the port instead of being overrun by it; as importantly, it makes it possible for the population prosper because it preserves the forest, not at its expense.

The infrastructure-first model has proven increasingly difficult and risky to implement. Rising in its place is a new model … Instead of the massive service network designed to irrigate expansion, this new approach is geared toward treating specific needs.

I encountered a similar problem in the vastly different context of northeast Haiti. There, the RN6 highway extends east from Cap Haitien to the border of the Dominican Republic, connecting four villages: Limonade, Caracol, Trou du Nord, and Terrier Rouge. This rapidly urbanizing area possesses fertile soil and grazing land, unspoiled coastal beauty and marine life, a new industrial park (PIC), and a university. These assets are, however counterveiled by poor land-use practices, an absence of regulation and enforcement on informal construction; and the lack of any record of land tenure. There is minimal to no utility service (solid waste, sewer, water, gas), contributing to slow economic growth and high unemployment; a low standard of living, including a plethora of health problems; and environmental degradation, from erosion due to lack of flood control, to contamination of soils under both farmland and habitable areas.

Both large international lenders (World Bank, EU, InterAmerican Development Bank, etc.) and NGOs have invested in infrastructure in the region, but these projects are dispersed. With little to no integration or consolidation of uses, they are seldom transformative in their cumulative impact. To the contrary: The scattered nature of infrastructure investment there has exacerbated as many problems as it has solved, increasing traffic and accidents along the highway by requiring greater and longer trips for people to meet their daily needs, from commuting to taking kids to school to fetching clean water to shopping. A grander, more ambitious infrastructural plan is not the answer, because the government cannot be relied upon to execute projects of any complexity.

I was a part of a team charged with developing a prioritized strategy for infrastructural investment. We eschewed a single comprehensive plan in favor of a series of opportunistic, targeted (site-specific), catalytic interventions that could be executed in any order, as the unstable political climate permitted. Rather than being of single purpose, as past investments have been, these bundles, as we called them, are comprised of a robust combination of facilities designed to attract people simply by consolidating and reducing the number of trips required of them to accomplish their daily routines. The infrastructure bundles include differing combinations of: a transit center, market, health center, job training center, agricultural processing facility, and municipal services such as water supply and green waste station.

Since the region uniformly suffers from a lack of services, bundles were located not on the basis of need, but by proximity to existing infrastructure assets. The bundle approach is acupunctural: Each is precisely located, on ”known” unclaimed land adjacent to the RN6 highway, within reasonable walking or biking distance of existing population (residential/educational/employment) centers. Accordingly, one bundle is located adjacent to the industrial park at Caracol, the region’s largest employer; another is in Limonade, near the University, and a key transfer point between public transit to and from Cap Haitien and private transit services eastward. By consolidating development around a few select hubs of activity, the daily itinerary of area inhabitants is simplified and made more convenient, with the net effect of reducing and easing travel on existing infrastructure. True to acupuncture’s counterintuitive principle—that the point of intervention may not be coincident with the locale of its effect—one bundle, which includes a cold freight terminal, is not even located within the study area. Yet its impact is expected to significantly alleviate traffic congestion from PIC to Cap by allowing export trucks to travel at night, when the RN6 is empty.

As the United States debates the nature of badly-needed infrastructural investment, my experiences working in Ecuador and Haiti have led me to ask whether less might sometimes be more. For instance, might it be more efficient to have targeted, place-based infrastructure rather than large networks that connect places? Can we use infrastructure not in blind service to the manifest destiny of unmitigated urban expansion, but rather as a way of delimiting and shaping it? And is infrastructure best planned as a top-down enterprise, or might it be better to learn from these examples from the Global South and use infrastructure to solve local problems tactically?

The rise of digital communication and transitions in the technologies of mobility requires new thinking, not just new infrastructure. That new thinking might do well to place less emphasis on the insufficient supply of infrastructure, and more on how we utilize, recover or reduce the excess capacity we have now.