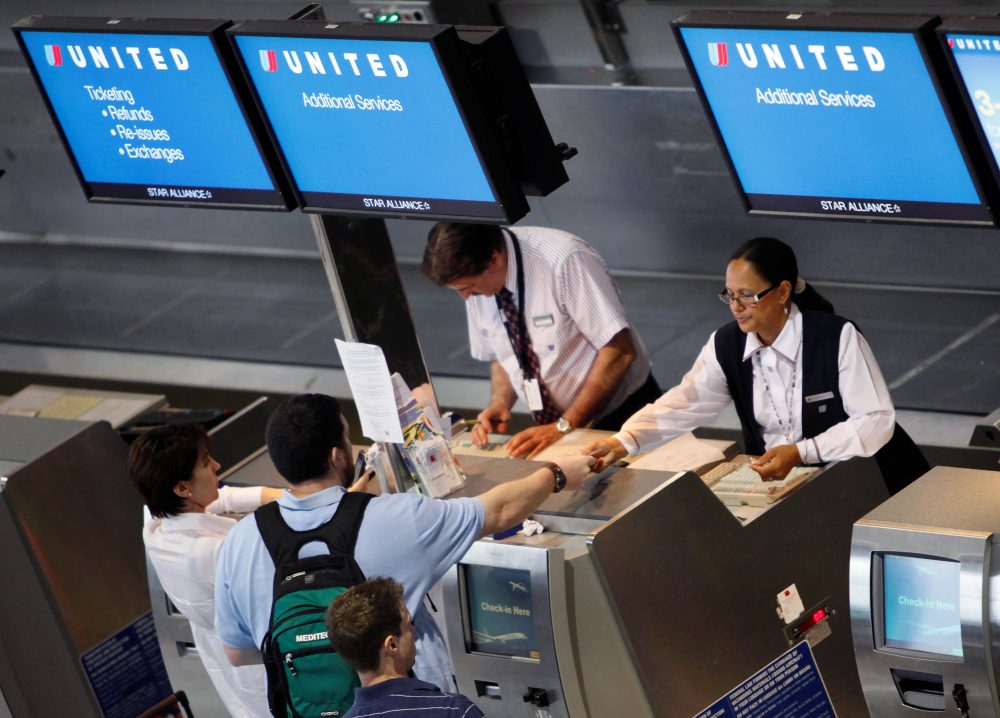 Passengers check in at the United Airlines ticket counter at Logan International Airport in Boston, on July 21, 2009. Photo by Michael Dwyer/Associated Press.

Last month, consumers around the world were disturbed by video showing a passenger being dragged off United Flight 3411 by at least three security guards.

I don’t need to add my opinion to the millions that have been expressed about the incident. But as a professor of operations management, I am interested in the fundamental economic problem that led to the confrontation caught on video: What is the best way for a business to handle overbooking?

Overbooking is a necessity for airlines to manage their seat capacity. That’s because of a fact of life: Many people fail to show up for flights upon which they’re booked. The trouble comes when more passengers show up for a particular flight than there are available seats. In those situations, airlines need to have proactive mechanisms that treat customers fairly without breaking the bank.

United clearly failed in that. And so far, the airline’s response has not been detailed enough. On April 27, 2017, United printed a full-page announcement with a title “Actions Speak Louder Than Words” in all major newspapers and sent email to all United Mileage Plus members. United claimed that it would identify volunteers to give up their seats earlier, in cases of overbooking, and would increase incentive payments for voluntary rebooking up to $10,000. But those pledges are still just words, without a real plan for implementation.

I believe research and practices in information and technology show that there are cost-effective ways to make sure overbooking is customer-friendly.

Such a plan starts with earlier planning and action by the airline. For starters, check-in information for flights should be collected early; this means using technology.

First, encourage more customers to check in early over the Internet or mobile phones. And second, when an overbooking situation develops, inform volunteers as early as possible via Internet or mobile phone, or at the gate. Both measures not only give people more warning, they can give United more data to crunch and use to prevent overbooked flights.

Beyond moving early and using data, United should create a new mechanism to identify and compensate passengers who give up their seats. That mechanism should be a sealed-bid process.

Indeed, with millions if not billions of such past flight records, United can conduct “predictive analysis” to estimate the number of volunteers that is needed for a particular flight. As time progresses, United can compensate those pre-registered volunteers and make alternative travel arrangements way before boarding time. This makes it easier to make volunteers feel warned and respected.

But beyond moving early and using data, United should create a new mechanism to identify and compensate passengers who give up their seats. That mechanism should be a sealed-bid process.

Here’s how it would work: During online check-in, United could gently ask passengers if they were willing to be added to the volunteer list. At the same time, United could ask passengers to state the dollar value (up to $10,000) that they would accept as compensation for volunteering their seats. That amount they submit is the sealed bid.

Passengers should be told that the passenger who submits the lowest bid will be selected to give up their seat, receive compensation, and have the airline make alternative travel arrangements.

With this method, United can identify potential volunteers and their requested compensations in advance. That, at the very least, reduces the likelihood that anyone will have to be wrestled off the plane.

There’s another benefit. Considerable research on auctions shows that such a sealed bid process entices passengers to reveal the “true value” of their seats. The late William Vickrey, the economist and Nobel laureate, used game theory to describe how best to optimize such auctions. His work also has been applied to congestion pricing on toll roads in places like London.

And if United wanted to get really fancy, it could try to capitalize on one of his insights: People will make more generous bids in a process that awards the best bidder the amount of the second-best bid. Vickrey showed that letting people know this fact when they bid made them less likely to try to game the system by guessing what others might bid, and instead submit their best bid according to their “true” private valuation of their seat that is not known to others. United, by making its sealed-bid for volunteer compensation a Vickrey option, would give the winning volunteer, or volunteers, a little bit more than they asked for—e.g. the winner asked for $200 in compensation, but gets $250, which was the second best bid—while overall producing bids that are more generous to the airline. (Of course, this might be too complicated, but even a regular sealed-bid process would be a vast improvement.)

No mechanism is perfect. And clearly, some passengers will refuse to be added to the volunteer list. But some would be willing to volunteer if their demands are met. Such a process is also consistent with the values of volunteerism: If you volunteer to give up your seat, compensation should be on your terms. A sealed-bid auction makes it less likely that the airline will overpay the volunteers. And airlines can fall into that trap. Delta, for example, sets the dollar amounts for volunteers and can end up attracting too few volunteers if the suggested dollar amount is too low. Or it can end up overpaying too many volunteers if the suggested dollar amount is too high. (The figure below shows how that happens.) 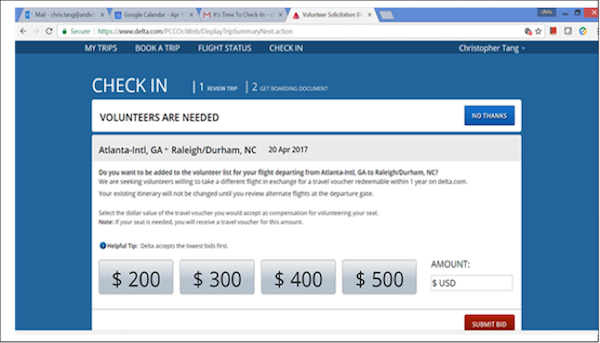 Smart design of information technology and clever use of business analytics can make a huge difference for a company and its customers. With a proactive process like the above, United, even after the damage of that infamous video, could make the skies friendlier again.