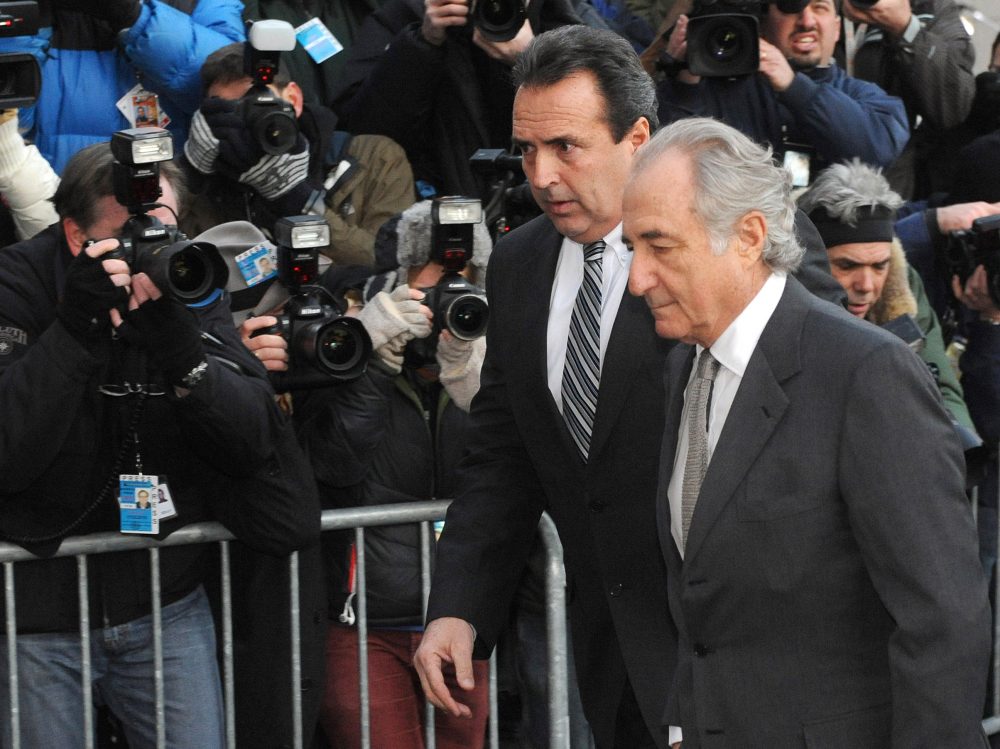 Bernard Madoff, who transformed his wealth management business into one of the biggest scams in history, arrives at Manhattan federal court on March 12, 2009. Photo by Louis Lanzano/Associated Press.

For centuries, this society has been especially receptive to economic innovation and the strategies of wealth-seeking that so often accompany it. Openness to new technologies and new ways of doing business exacerbates information gaps between sellers and buyers. Those gaps, along with the enthusiasm that comes with new products and investment vehicles, create opportunities for fraudulent promoters and the bait-and-switch brigade.

As the journalist Edward Smith noted in the 1920s: “Every social change, every new invention brings to life a fresh manner of separating the sucker and his money. It may be and usually is only a disguised evolution of an older swindle, but it is new to the victim and therefore effective.”

That said, the last few decades—the period since 1980—have seen a dramatic increase in the scale and breadth of American business fraud. Of course, Americans in earlier eras encountered fraudulent investment scandals, like the market manipulations at the Re brokerage firm (which came to light in the early 1960s), or the misrepresentations made by the National Student Marketing Corporation (in the early 1970s). There also were egregious consumer frauds, such as the abusive mode of selling home heating systems by the Holland Furnace Company. But the worst of these episodes took place within medium-sized corporations, or on the fringes of the economy.

Today, fraud has become big business. In the last four decades, fraud cases running into the billions of dollars have become commonplace. So have allegations of marketing duplicity or false accounting against many of the largest corporations operating in the United States. Massive government contracting frauds roiled the defense industry in the 1980s and the healthcare industry the following decade. Consumer frauds have steadily targeted older Americans, first through telemarketing and now via the web.

During the late 1990s and early 2000s, accounting scandals rocked a series of major corporations, including Enron, WorldCom, and Sunbeam. Over the past decade, pyramid schemes such as those run by Bernard Madoff and Allen Stanford have bilked tens of thousands of investors. And in the run-up to the global financial crisis of 2008, the provision of marketing information throughout the entire chain of the American mortgage system became shot through with duplicity, with falsehoods embraced by appraisers, mortgage brokers, third-party loan assessors, underwriters, and distributors of derivatives.

In the last four decades, fraud cases running into the billions of dollars have become commonplace. So have allegations of marketing duplicity or false accounting against many of the largest corporations operating in the United States.

This era of gargantuan fraud scandals is still with us. Even after the reality check of the most recent financial crisis, major fraud scandals keep happening: LIBOR rate-fixing; creation of myriad unauthorized accounts at a major nationwide bank, Wells Fargo; and another alleged billion-dollar pyramid scheme, Platinum Partners.

What accounts for this dramatic growth in the magnitude of corporate deception? The post-1980 preference for deregulation has played a big role. Cuts to enforcement budgets have been a common theme in explanations of fraud episodes. So has the disinclination among policy-makers to impose regulatory constraints on newly emerging markets such as financial derivatives.

A key premise among supporters of deregulation is that the reputational incentives created by markets will serve to check the rankest frauds. Corporations won’t go down the path of duplicity, this way of thinking presumes, because the long-term consequences of lost business can be so devastating. Unfortunately, the behavior of scores of corporations over the past few decades belies this comforting narrative. Companies have so decisively bought into the use of short-term incentives to structure compensation for employees and executives that it’s often hard for them to think much past the next quarter’s financial results.

After the 2008 financial crisis, American policy-makers placed a premium on containing marketplace duplicity. Most importantly, Congress created the Consumer Financial Protection Bureau (CFPB), with major duties: improving the flow of financial information to consumers, monitoring the operation of consumer credit markets, and bringing enforcement actions against businesses that engaged in unfair, deceptive, or abusive tactics. The CFPB has worked hard to simplify financial disclosures to consumers, and has clawed back almost $12 billion through a series of settlements with financial firms accused of wrongdoing. But in this same period, Congress also loosened disclosure requirements for many start-ups, a deregulatory move that has raised concerns about new opportunities for fraudulent promotion of new companies.

We now have an administration in Washington that trashes regulation of all sorts and appoints vehement opponents of regulation to run federal agencies. It’s not hard to imagine that enforcement budgets for consumer and investor protection will once again take a big hit, and that federal regulators will adopt a more forgiving posture toward dodgy marketing tactics.

Such policies are their own kind of sucker’s bet. If the Trump Administration implements them, the long history of American business fraud suggests that we can look forward to more headlines about major corporations that have cooked their books or cheated their customers. When scandals of this sort accumulate, they have consequences beyond short-term economic losses. Indeed, they undermine the social trust that underpins our country, and healthy capitalism itself.