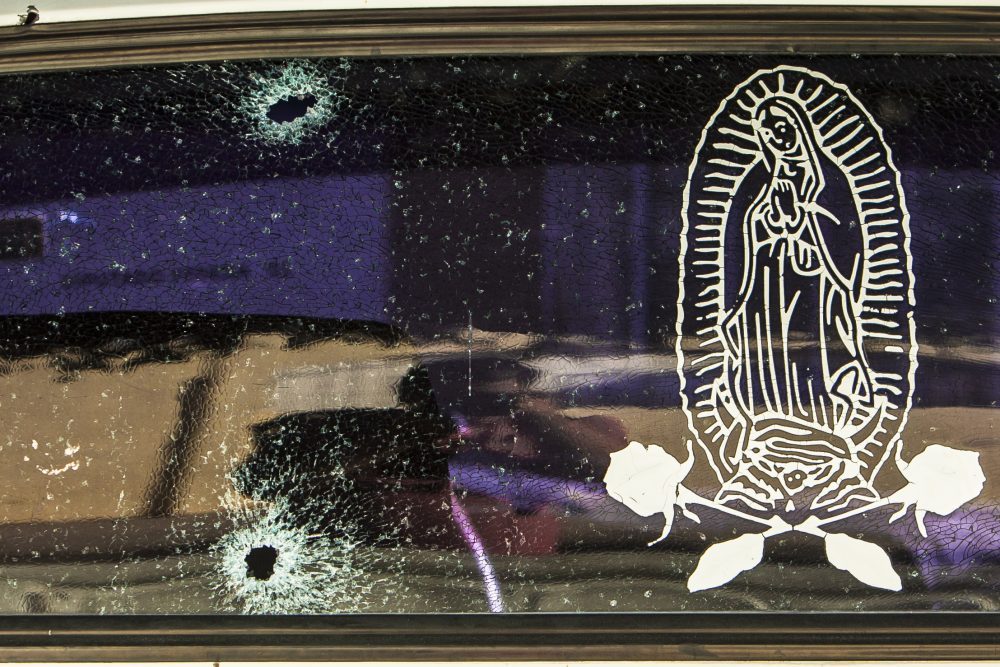 The rear windshield of a vehicle is held together by a transparent film with an image of the Virgin of Guadalupe, after being struck by bullets, in Culiacán, Mexico, Feb. 7, 2017. Authorities said that several suspects and a Mexican marine died in the incident after heavily armed men attacked the patrolling marines. Photo by Rashide Frias/Associated Press.

In early 2007 I lost a plane ticket that I had purchased to travel to Africa. My plan was to arrive in Nairobi and stay two months, since the World Social Forum was scheduled to be held there in February of that year. I hoped to obtain some interesting insights, as well as personal contacts that would let me take the first steps toward becoming a war correspondent on that continent.

But just as that year began, Mexico’s then-president Felipe Calderón, feeling pressured politically, declared a war on drug trafficking. So when I least expected it, instead of wandering around in Kenya, I abandoned my planned trip to Africa and instead found myself riding in a Mexican army assault vehicle, wearing a military helmet and a bullet-proof vest, crisscrossing the Tierra Caliente (Hot Lands) region of the south-central Mexican state of Michoacán.

A correspondent is one who sends news from somewhere far away from his own previous reality, or from the reality of others. I became a correspondent, filing dispatches about an outbreak of barbarism—but in my own country.

Ten years later, the statistics show that, since Mexico’s drug war exploded in 2006, nearly 200,000 people have been violently killed, 30,000 more have disappeared, and another 35,000 have been displaced. Mexico is by no means a dictatorship, but so far in the 21st century it has recorded a greater number of human rights violations than occurred under any Latin American dictatorship in the last hundred years. Many of us Mexican journalists leave our homes every day to seek out and tell others about the barbarity that coexists here with democracy.

Faced with such a peculiar situation, it is impossible to do our job with one set of skills. After this grueling decade’s experience, I believe that anyone who covers drug trafficking in Mexico must have the attributes of a military correspondent, a private detective, and a poet.

At times I have felt like a war reporter. I remember flyovers of military planes in Oaxaca that preceded a shootout lasting about two hours, during which I helped carry an injured photographer colleague out of the line of fire and witnessed the murder of the U.S. independent journalist Bradley Roland Will at the hands of paramilitary groups whose existence the authorities denied. As in any war, you cannot rely on official sources.

At other times, I have had to carry out my investigations with the cautious precision of a detective. The monitoring and tracking of people, covert infiltration, and the compiling of judicial and criminal profiles are necessary resources in the face of the challenges of our present situation, where you have to protect not only your own integrity, but also the lives of your contacts and sources. It wasn’t until this year, after taking a course at a U.S. detective academy, that I discovered the similarity between the two professions.

But it has been poetry that has saved me from losing my mind during these trips to the abysses of reality. Thanks to poetry, I have been able to take care of my loved ones, despite my frenetic and at times neurotic work process. If at the end of the day there was not a poem by César Vallejo, or by Samuel Noyola, I never would have escaped the deep emotional chasms I have known during these years of keeping company with capos, generals, assassins, governors, businessmen, and other members of the savage wilderness. Without poetry, I could not do journalism.

Mexico is by no means a dictatorship, but so far in the 21st century it has recorded a greater number of human rights violations than occurred under any Latin American dictatorship in the last hundred years.

“Worn, ragged, empty, words have become skeletons of words, phantom words; everyone chews them up and belches their sound,” wrote Arthur Adamov during World War II. Seeing that same distortion of language in my daily work—the inadequacy of words to describe what is happening in Mexico—in 2011 I wrote a manifesto of infrarrealist journalism. Infrarrealist journalism, in short, is a herd of solitary wolves.

The desire for survival also unites solitary wolves, and I am not speaking metaphorically: In 2016 there were 11 murders of journalists in Mexico, and in total there were 426 attacks. During the current government of Enrique Peña Nieto, 32 comrades have been killed. On average, every 20 days a Mexican journalist dies violently for completing his or her job. Only this year, so far, Carlos García has died in Colima; Cecilio Pineda in Guerrero; Ricardo Monlui in Veracruz; Mirosalva Breach in Chihuahua; Max Rodríguez in Baja California; Javier Valdez in Sinaloa; and right now, just as I am writing this, I read that they have found the oxidized remains of Salvador Adame, a journalist kidnapped and disappeared a few weeks ago in Michoacán.

Taking into account that I am an independent journalist—the lowest species on the media food chain, but probably the most joyful—the current situation has caused me to take more personal security measures, because I don’t have a big media company to back me up, or anyone else to watch out for me. These measures include keeping several backups of key documents, compartmentalizing sensitive information among friends and collaborators, avoiding certain subjects in emails, WhatsApps, and phone calls, and even now and then writing a kind of confidential will, where I register what I am doing so that in case of an extraordinary situation that information can be used against whoever is responsible.

Otherwise, I’m a Stone Age reporter, doing things the old-school way. So I record everything I can while doing field work. In fact, I fill up two notebooks: one where I put hard data, and another where I write down sensations or ramblings. I also take photos, to help me remember later, and I try to make video. I like to stay as long as possible in places. I return two or three times, if possible.

When I arrive for the first time, I look for a local colleague, but also for a local school teacher and a priest. When I am lucky I meet a poet, and I am very happy. Journalists, priests, teachers, and poets are often my gurus in the immersion process that is needed in order to write the chronicle of a dangerous and unknown location.

When I am not reporting, I get up early to drop off my child at school, and then lock myself away to write from 7 a.m. to 1 p.m. I almost always have too many things accumulated in my notebooks and in my memory, so I have to structure my texts. Then I write them out several times, and usually review them in order to prepare a risk analysis in the event that they are published. Almost all my books and long-form pieces are reviewed by lawyers.

Being a correspondent in your own home compels you to be creative—in your ways of devising a story, and of investigating, structuring, writing, and publishing it, but above all in your ways of surviving it. I am happy with the life that has fallen to me, and I wish to die of old age, writing in front of a computer. I have no vocation as a martyr. I am a person with more hopes than fears.

However, over these 10 years I have learned that each story has to take a risk. There should be no cowardice when writing in times like these. It is probable that I have written some failed texts, but I do not allow myself to write cowardly texts. When you are a correspondent of barbarism in your own home, your main duty is to take risks. In this way, I think, we can decipher one day this atrocious mystery into which we fell as a country, just when it seemed that democracy was going to save us.