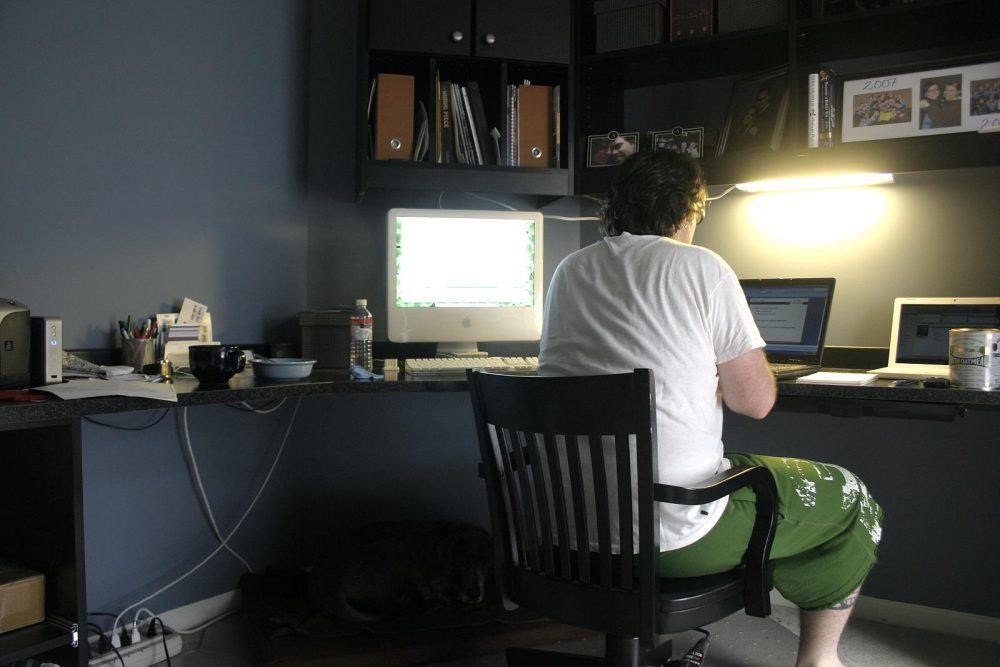 Mechanical turk promises workers that they can make money from performing many small jobs on their own computers in their own home. Photo courtesy of Shane Adams/Flickr.

If you’ve never heard of Amazon Mechanical Turk, my workplace of the last 11 years, you’re not alone. Most people know about Amazon—the massive conglomerate where you can do everything from buy a book to put your online store into the cloud. Fewer know about Mechanical Turk, the crowd-work platform Amazon owns and runs. But mTurk is worth knowing about. Amazon claims that more than 500,000 people work there, and crowd-work is a growing industry, encroaching on fields from journalism to medical diagnosis.

What does “crowd-work platform” mean? Basically, Mechanical Turk is a website where workers (“Turkers”) can find jobs and employers (“requesters”) post them. Jobs are varied, anything one might do on a computer that a computer cannot do alone—tagging photos, writing copy, classifying videos, taking surveys. But jobs are not very big. Instead, each big project is broken down into numerous tiny “microtasks,” called Human Intelligence Tasks, or HITs.

Imagine, for example, if a requester wanted to use Mechanical Turk (mTurk) to translate this article into French. Offline, someone might hire a single person to translate the whole thing. But on mTurk the piece would be cut into single sentences, turning one job into hundreds of small jobs. The entire pile appears online, on the mTurk dashboard, at once. Thousands of workers at their different computers rush the pile, grabbing as many as they can.

The workers complete all of those sentences at the same time, so the translation takes just a few minutes—rather than the few days it might take one person working alone. The HIT method is also cheaper than employing a single worker, as each sentence pays only a penny or two. Amazon facilitates the entire process. The job poster just has to upload the work, prepay Amazon’s fees, and wait a short while.

Cheap, easy, fast: No surprise that businesses and academics use mTurk frequently. The most common business tasks posted are transcription, content creation, classification, and feedback. Academics—as much as half of requesters at any given time are researchers—often seek study participants (asking them to provide information as innocuous as their favorite food or as disturbing as their experience of sexual abuse). Since academics tend to offer the worst pay on the platform, workers have gone so far as to create a set of guidelines for researchers to urge better treatment. Businesses are not much better. One study found the median hourly wage for all mTurk tasks is only $1.38.

mTurk likes to emphasize worker perks. You can work when you want, where you want. Most of the tasks do not take advanced skills to complete. People who struggle to find a job offline—such as those with disabilities, those with criminal convictions, and those who must stay home—can make money Turking. And supposedly, you can be choosy about the work you want to do, skipping tasks that you don’t like or that you feel do not pay enough.

One second I would be frantically completing a batch, the next looking desperately for something to do. I might be designing a logo, then watching a video of a man immolated by ISIS, then translating business documents into French.

But that wasn’t my experience. I started at mTurk when it opened in November of 2005. An entrepreneur, I had always attempted to stay on the cusp of profitable online work, and I was intrigued. Within just a few minutes I was choosing which of three images shown on screen best represented the front door of a business. I didn’t see it as work—more an experiment, something new to try while the kids were sleeping.

Then in April of 2010, my husband lost his job. We had just bought our first home, and when we moved I’d closed the daycare I ran. I realized mTurk would have to be my family’s income. I worked seven days a week, sometimes 17 hours a day, to make enough. While my husband went back to school, and over the two years it took him to find a new job, I kept Turking to feed us and pay our mortgage.

I developed a ganglion cyst in my wrist, then tennis elbow, then problems with my trapezius muscle in my shoulder. There was a psychological toll as well. “Content moderation” work on mTurk can mean exposure to some of the worst imagery available online: tagging a photograph of decapitated heads, classifying photographs and videos of animals being tortured and murdered or children being sexually abused.

Could I have refused these tasks? Technically, yes, although there is no way to definitively know the content of a task before you accept it. But you cannot be picky when you have a daily income goal to meet. You don’t know if another task will pop up—and most HITs pay less than a dime per piece. The worker flexibility and choice that Amazon touts, therefore, was to me mostly a mirage.

A typical day began as soon as I woke up. I would turn on my “refreshers,” scripts which looked at HITs posted and alerted me to anything feasible. I looked at my Dashboard, which told me how much of my recent work had been approved or rejected. If things were okay, I could get breakfast. And lunch, since I knew I would not be making it to the kitchen again any time soon. If there was some good work up, I would rush and make my dinner as well, preparing for a long day at the keyboard, during which teeth might not be brushed, showers not taken, doctor’s appointments missed, and my child would make her own way to the school bus.

Studies show that looking for work takes more time than completing it. Since tasks are posted randomly throughout the day and night, I had to stay glued to the screen; planning anything apart from mTurk was difficult. When I found HITs, I would rush to get them done, because thousands of profitable tasks can disappear in a matter of minutes. One second I would be frantically completing a batch, the next looking desperately for something to do. I might be designing a logo, then watching a video of a man immolated by ISIS, then translating business documents into French. The grind was wearing.

So was worry about rejection. Requesters on mTurk can download work you submit before approving payment. If they want to keep the work for free, all they have to do is reject your payment. (This paper explains the limited means of appealing rejections: “Dissatisfied workers … had little option other than to leave the system altogether.”) The more rejections you get, the less work you can access; requesters often disallow anyone with a low “approval rating”—and “low” can mean 98 percent—to access their work. Too many rejections may get you suspended from mTurk completely.

So mTurk has changed for me, from an experiment, to a job that makes me miserable, to a community of people I have come to love.

A few years ago Amazon added the “Master’s Qualification,” billed as a status given to the best workers and provided at a premium to requesters. But Amazon does not say how they grant this status—workers have seen it given to people with low ratings or even those currently suspended for bad work—and Master’s qualified work isn’t better quality or better paying. mTurk also rolled out a new “worker’s website,” but it offers no real new tools, just streamlined looks and a better mobile platform. Amazon doubled their requester fees in June 2015, after which the number of jobs plummeted, making it even harder for workers to meet income goals.

Despite all of this, I continued. I couldn’t work outside my home, so my offline choices were limited. My family had to eat and needed shelter, so I stayed.

What improved my worker experience on mTurk is the organization of workers themselves. TurkerNation.com, a forum for mTurkers, opened in November of 2005. Hundreds of workers gather there to share tips. We warn each other which requesters to avoid and sound the alert when good work is posted. I started to work as a community manager on TurkerNation in 2005. If not for that group of people and their support, I do not think I would have been able to make enough to live in the last decade, let alone kept my sanity through the process.

The most amazing thing about Turkers is how varied they are, and I like to refer to the community as being like a quilt. Each square is different, from the homemaker in the United States, to the IT consultant from India, to the content moderator from the Philippines. Some are young, some are old; some are unemployed, others are looking for additional income; some do it for fun, others for money, and still others to learn or to fill their time. This variety serves requesters well, as any demographic they wish to reach is easily available, and yet it sometimes keeps the Turkers separated due to language and cultural differences. Regardless, those who do participate in the community make it rich, and their participation is the reason why I stick around.

So mTurk has changed for me, from an experiment, to a job that makes me miserable, to a community of people I have come to love. The moment my husband found a new job in 2013 I promised myself I would never work on mTurk again. I went back to school, finished my degree, and hope to keep that promise. I continue to stay a part of the mTurk community, however, because of the forum. I’ve grown to see them as my family, and I will fight to the end to try to help all of them earn as much as they deserve.

More and more stable, well-paying jobs seem to be making way for precarious workplaces such as mTurk—or TaskRabbit, Uber, Instacart. Turkers are asked to be journalists, pathologists, programmers, graphic designers, legal assistants, academics, and virtual girlfriends. None of these jobs are disappearing. They are just going to a cheaper, faster, and more efficient platform, offered to a crowd of workers at pennies a piece. Right now, thousands are ready and willing to take the offer. In the future, thousands more may have to. Based on my experience, this scares me.