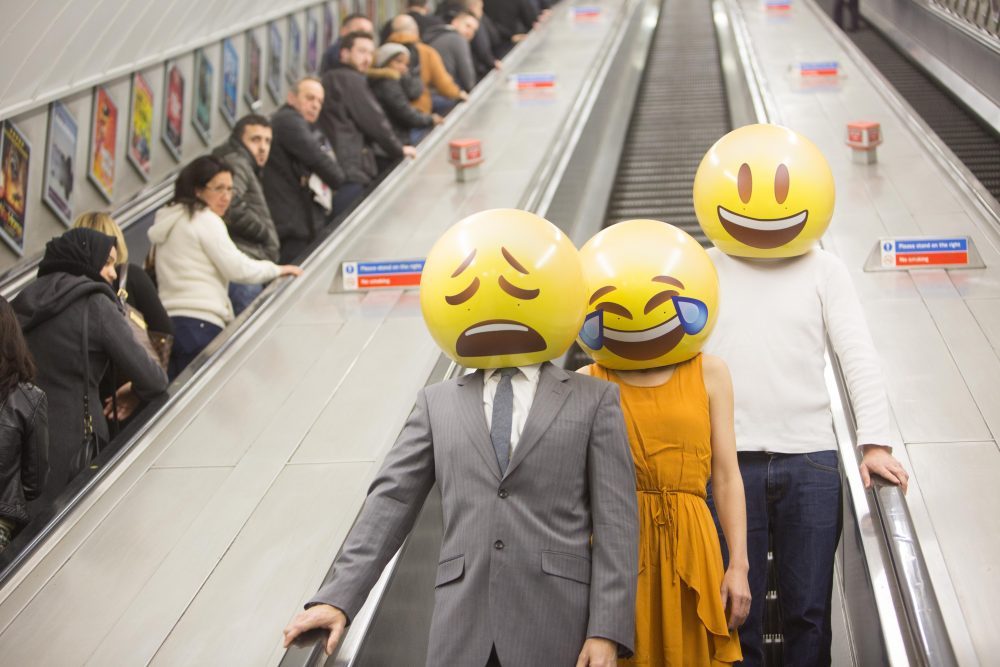 It’s been 35 years since Scott Fahlman, a computer scientist at Carnegie Mellon University, urged users of an online bulletin board to add two character sequences to their messages: ‘:-)’ to mark jokes; and ‘:-(‘ to indicate the preceding text was not meant humorously. The smiley (or emoticon) was born.

A mythology grew up around the importance of inserting graphic elements at the ends of written online text: Because we aren’t face-to-face with our interlocutor, we need to provide additional information to convey what our demeanor, body stance, or vocal intonation might have offered. During the early popularization of email and IM, newbies were warned that online messages could be easily misunderstood. As a safeguard, emoticons could help.

Over time, online graphic markers have evolved in type, number, and function. The Japanese invented kaomoji, a version of emoticons but written horizontally, in 1986, and the style spread in Asia. GIFs—essentially small pictures, these days often animated—first appeared in 1987. And then there are emojis, initially introduced on Japanese mobile phones in the late 1990s. (The word “emoji” sounds as if it’s related to “emoticon,” but it’s a combination of two Japanese words meaning “picture” and “character”.) Though it feels as if there are now zillions of emojis, the official total in the Unicode Standard was just over 2600 as of July 2017. Users of mobile devices can pluck off what they like to incorporate into messages.

If a picture is worth a thousand words, we might think that emojis, like their emoticon and kaomoji ancestors, could be relied upon to clarify our online written messages. It turns out, though, that emojis are subject to the same potential pitfalls as traditional speech and writing. 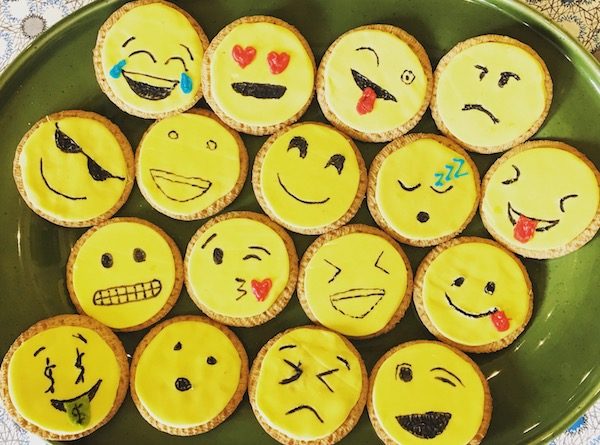 At its core, human language enables people to convey meaning to one another. When language or other symbolic systems don’t seem adequate to express what’s on our minds, we get creative. We repurpose existing words to have new meanings, as when in the 1950s, Americans began to use the word “moonlighting” to mean working a second job (as it were, by the light of the moon). We borrow from elsewhere, as with the wonderfully onomatopoetic “schlep,” taken from Yiddish, which had earlier schlepped over from Middle High German.

We also borrow (or make up) words or symbols that concisely express what otherwise would require a whole phrase. Think of German “Schadenfreude,” which is definitely shorter than “pleasure derived from the misfortune of others.” Or take the “thinking face” emoji—

—or the “person getting a massage” emoji—

Even with plenty of words, though—or plenty of emojis—communication can be misleading or ambiguous. For communication to be successful, both sender and recipient need to assign the same meaning to symbols. But there may be no guarantee of a match. If I’m your supervisor, and I say, “Just take an hour” for lunch, you might bristle because you interpret me to be a stickler for time on the job, when I mean to encourage you to get out of the office and relax. (This is an actual example. It took two years before my administrative assistant revealed she’d felt insulted.) When The New York Times tweeted on June 4, 2017 that “The London attacks [on London Bridge] hit a nation still reeling from the shock of the bombing in Manchester almost 2 weeks ago,” resilient Brits reminded the world that in the U.K., “reeling” denotes a Scottish form of dancing. With emojis, if I send you a message that just shows a person in a bed—

—am I saying that I’m going to bed? That you should? That I’m about to buy a bed? That I’m in the hospital? It turns out that pictures rely on context for correct interpretation, just as words do.

But there’s another requirement for communication (offline and online) to be successful, and that is knowing how to express what we want to say. Writers have long looked to others for help. Take the old-fashioned genre of “complete letter writers”—books which provided sample missives for all occasions, from writing home to your family to asking a business associate for money. By the early 20th century, when use of the telegraph became more familiar and affordable, Western Union started offering pre-set messages for those who (in the words of Annteresa Lubrano, author of The Telegraph) “needed help in finding the right words for the right occasion.” 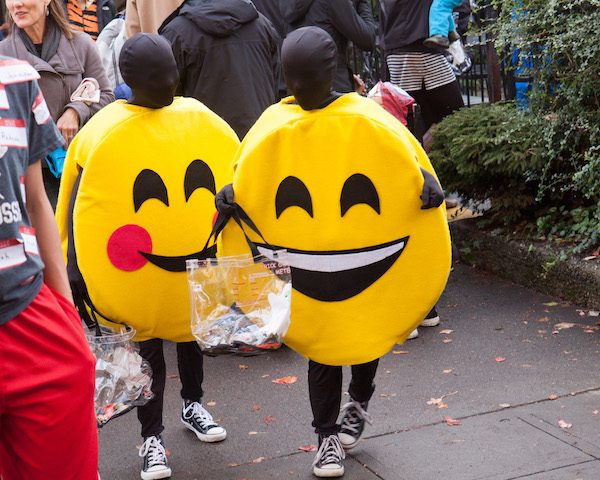 Then there’s the printed greeting card, which first appeared in the mid-19th century. Those purchasing such cards don’t need to figure out what to say or how to say it. Be it a wedding or birthday, retirement or death, just sign the card, address the envelope, affix a stamp, and find a mailbox.

Sometimes greeting card messages accurately convey what is in our hearts. But not always. Valentine’s Day cards are the perfect example. Stand at the greeting cards section of a store in the run-up to February 14, and you find men and women purchasing mushy sentiments that hardly represent what they feel about their significant other. The same duplicity occurs in spoken language: Think of passing an acquaintance on the street, asking “How are you doing?” and hastening on before waiting for an answer, or of telling a person you instantly dislike, “It’s been a pleasure meeting you.”

What about using pre-fabricated emoticons or emojis in online communication? Do we always mean what they say? Sometimes we insert graphic markers because we feel we are supposed to. Teenage girls, studies have found, judge male age-mates to be unfeeling if they don’t liberally pepper their text messages with graphic add-ons. At the other end of the user spectrum, my professional colleagues of a certain age are now inserting icons from their mobile phone menus, though they would never wink or stick out their tongue that way IRL, even with their closest friends. When I ask why, the answers are “It’s fun,” “It makes me feel young,” or “Isn’t that what you’re supposed to do?”

As teenage girls, mature academics, and millions of others can attest, using graphic markers can add enjoyment, along with creativity, and often clarity, to online communication. Such benefits are important because they encourage us to think about what meanings and emotions we wish to convey to others.

However, as with spoken and written language, is there any guarantee that our symbols will consistently convey to our interlocutor what is in our minds or hearts? As any linguist—or psychiatrist—will tell you: Don’t count on it.