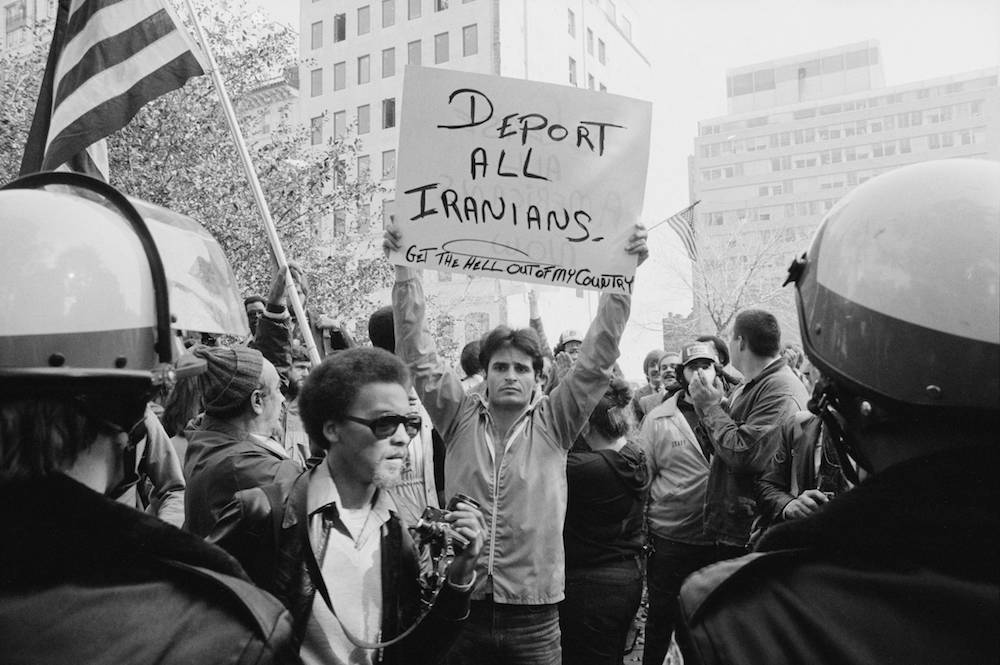 A protest in Washington, D.C., during the hostage crisis in November 1979. Photo by Marion S. Trikosko/Library of Congress.

Ever since the Iranian Revolution of 1978-79, Iranian American immigrants, including the large number of us living here in Los Angeles, have been personally feeling the effects of the rising and falling tension levels in U.S.-Iran relations. That historic upheaval, which severed Washington’s close ties to the former Shah of Iran, and resulted in the taking of 54 U.S. hostages, has marked interactions between the two countries for decades, sometimes leaving Iranian Americans—even those vehemently opposed to Iran’s theocratic regime—caught in the middle.

Today the debate on U.S. immigration, Israel and the Middle East, the Iran nuclear deal, and other issues are having significant impacts on the Iranians I know who are living in Los Angeles. L.A.’s Iranian American community is hardly monolithic, and many Iranians identify by religion more than nationality. Obviously, I can’t speak for all of my fellow Jewish Iranian immigrants in Southern California, let alone for the large numbers of immigrant Iranian Muslims, Zoroastrians, Christians, members of the Bahá’í community, and others belonging to the diaspora who’ve settled in metropolitan Los Angeles. But what I see is that our community has felt the impact of the travel ban imposed earlier this year—as well as other current U.S. immigration policies—in a way that is personal, intimate, and painful.

There are several explanations why. First, the size of the Iranian American community here is larger than that of any other country targeted by the travel ban—Syria, Sudan, Somalia, Libya or Yemen. It’s difficult, in fact, to assess how large the community really is. I’ve read estimates ranging from 350,000 to a half-million Iranian expatriates in America; the U.S. Census bureau has placed the total at about 370,000.

One reason it’s hard to settle on population size is that Iranians do not feel comfortable giving out their private information to a census. It feels completely antithetical to everything they learned in Iran about the dangers of divulging information to government officials. A frequent joke was that if someone knocked on their door, people would go hide, even though they were American citizens who needn’t fear being deported. This speaks to a deep and strong fear of the government—even the U.S. government—knowing about your personal life.

The Iranian American community is not monolithic, and its members differ significantly in their attitudes about U.S. policy toward Iran. Some Iranian Americans favor a hard U.S. line. Particularly among Jewish Iranian Americans, there is a lot of distrust of the Islamic Republic of Iran, and so they support the U.S. and its allies imposing very strict sanctions to rein in the regime’s excesses. In my experience, the Iranian Jewish community has tended to be very supportive of the U.S.-backed economic sanctions against Iran to make it comply with the nuclear deal, because this community’s biggest fear is that Iran might turn nuclear weapons against Israel. And Zionism is a huge part of their identity: Israel is their spiritual home, and very significant for them.

Jewish Iranian Americans make a complete distinction between the government and the people of Iran, and I think that’s why members of the Iranian Jewish community feel really disheartened and sad about the travel ban. They’re saying, “If this ban had been imposed in 1979, we wouldn’t have been able to come to the United States.”

Furthermore, the travel ban feels like a collective punishment against those Iranians who have absolutely nothing to do with the Islamic Republican regime. On the one hand, the Iranian government is restricting their freedom to visit their homeland; and on the other hand America is not allowing their relatives to travel or move to the United States. They feel like they’re in limbo on both sides.

On the one hand, the Iranian government is restricting [Iranian Americans’] freedom to visit their homeland; and on the other hand America is not allowing their relatives to travel or move to the United States. They feel like they’re in limbo on both sides.

Furthermore, the terrorist groups that the United States is now fighting in Iraq and Syria, such as ISIS, are Sunni, whereas most Muslim Iranian Americans are Shia. They say, “As Shias, we’re also being persecuted by ISIS. So we’re not the ones doing this type of terrorism.” And, yes, the Iranian government supports the Shia Islamist militant group Hezbollah, but what does that have to do with the everyday Iranian grandmother just trying to come to America and see her grandchild?

Iranian culture is very family-oriented; everything basically is about your family. My students are absolutely devastated and heartbroken by what this is doing to their families. With family members in Iran whose weddings they want to attend, and grandparents who are aging and have been blocked from visiting the United States, they’re distressed and kind of in shock, asking, “What does my 70-year-old grandmother have to do with any of this?” They don’t know when they’re going to see their families again.

For my generation and my students’ generation, Iran is the language that we speak—Farsi—the food that we eat, and the culture that we represent, and are a part of. But in some ways it’s not a real country to us, because we haven’t lived there and some of us haven’t ever even seen it.

If your parents or grandparents are coming to visit from Iran, we’re not talking about a couple of days; we’re probably talking about a couple of months, or as long as their visa will allow them, in order to truly help raise their grandchildren. The way it works in the Iranian community, everyone lives with each other, takes care of each other. You sometimes have three generations living in one home, because we don’t put our grandparents in retirement homes, we move them in with us. You’re getting little kids growing up with their elders, hearing the stories, learning the language, eating the food. It’s the only way, when you’re an expat, of really keeping this community together, of keeping all of these aspects of being Persian alive in the home. Because they can’t visit their family members in Iran or the United States, many Iranians and Iranian Americans are having to fly to neutral countries like Germany to reunite.

Another huge aspect of this travel ban is its effects on the LGBTQ community. They’re severely persecuted in Iran, and a lot of them have escaped to Turkey, through the United Nations, thinking that they would be able to continue on to the United States. They were going to Canada, and now Canada is basically closing its door to Iranians because they are opening it to Syrian refugees. So this is a community that is truly suffering, because unlike other Iranians who have family support, most LGBTQ Iranians don’t have their family support in Iran, they will be killed in Iran. So they are truly feeling the weight of this ban because they are facing a life-or-death situation.

Personally, my large extended family has not been directly affected by the travel ban, because we don’t have any relatives still living in Iran. I was born in 1976, we left Iran in ’78, and I haven’t been back since. I write about Iran as an academic. But it’s so sad: I don’t know what it looks like and I’ve never even seen the Caspian Sea.

Legally there’s nothing preventing me from going back to Iran. In Iran you’re allowed to be Jewish, you’re just not allowed to be a Zionist. But for me personally to return, I think there would have to be a completely secular regime based on a democratic system, and then I’d wait a decade before going back. That’s why my focus is on the expat community, because I can’t go back. Most of my Iranian Jewish students also don’t have relatives still in Iran; what we know, we know from family stories. I learn about what’s going on from my Muslim Iranian American students. Iran for me is a country of the mind.

The irony for many of my generation of Iranian American immigrants is this: The current travel ban is punishing us for the actions of a regime that we don’t support, and that some of us have actively opposed. We don’t even see ourselves as immigrants because we’ve been here for almost 40 years. Iranian Americans take a lot of pride in being the kind of Americans who really respect this country and feel grateful. The travel ban harms people who have been true patriots.

It’s not like Iranian President Hassan Rouhani is going to suffer from the travel ban. The everyday citizen is going to suffer—not only Iranians, and Iranian Americans, but also Americans. When you’re looking at the Iranian American community, you’re seeing one of the most educated immigrant communities in the United States: Many doctors, and lawyers, and engineers. So you’re punishing America by not welcoming what most people would recognize as a model for the ideal immigrant community.