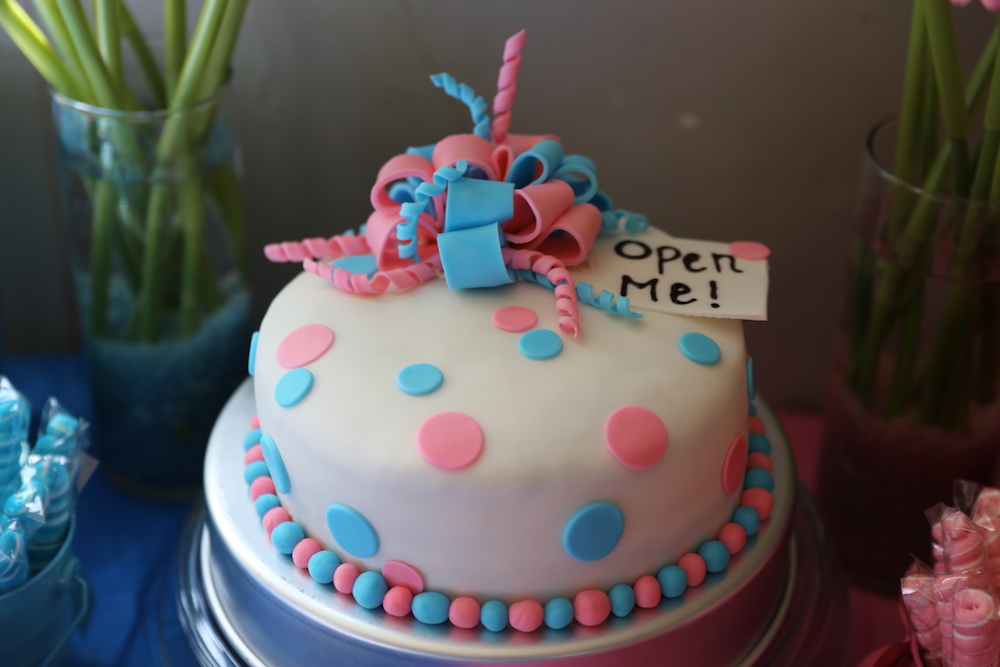 My youngest daughter often asks me to tell her about the day when, pregnant with her, I was riding to work on the subway and wondering whether she would be a boy or a girl. Just at that moment, I looked up and saw a deliveryman holding a bouquet of pink balloons and a sign that said, “It’s A Girl.”

Now, both my daughter and I understand that genetics determined her sex months earlier, but it’s fun for us to have a story that imagines the universe magically speaking to me. When I found out that she was a girl during an ultrasound, and an amniocentesis confirmed the result, the confirmation wasn’t exciting. And that’s a story she never asks me to repeat.

So I am not surprised at the appeal of gender reveal parties, at which expectant parents deliver the doctor’s pronouncement—no peeking—to a bakery, with instructions to make a pink or blue cake or cupcakes. During the party, they cut the cake or give out the cupcakes, and the color hidden under the frosting reveals to everyone whether the couple is expecting a boy or a girl. The party is suspenseful (revealing a secret), egalitarian (everyone finds out at once), and delicious (cake!)—a perfect afternoon. Unheard of a decade or two ago, gender reveal parties are the latest manifestation of the conflict between modern technological pregnancy and its ancient legacy of mystery. That this all plays out through pink and blue cake speaks to the peculiar anxieties and ironies of our time.

Now that almost every detail about pregnancy can be known, it’s hard to imagine a time when carrying a child was a hidden, and private, affair. Prior to the 19th century, the only way to be sure a woman was pregnant was at the quickening, when she could feel movement in her belly. This moment was the woman’s alone to experience, and she had the power to share her news or not. Women could withhold this information or adjust its timing in order to protect information about who the father was. 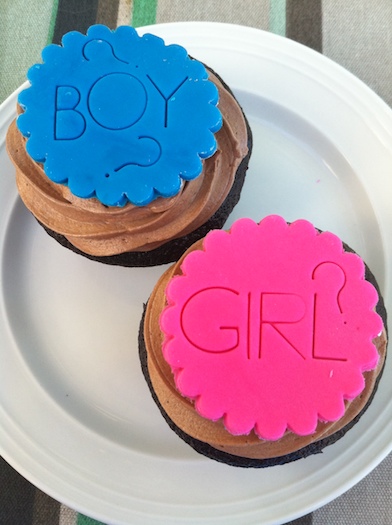 Gender reveal parties rely on a confusion over sex and gender. Photo courtesy of Kristin Ausk/Flickr.

In the Middle Ages, piss prophets used a combination of appeals to the divine and examination of a woman’s urine to create a precursor to the pregnancy test. But before there were ultrasounds and genetic testing, the sex of the baby was revealed only at birth. Of course, once people knew they were pregnant, they attempted to predict sex. Even today old wives’ tales endure, focusing on the position of the belly bump (low: boy) or the cravings a woman has (sweet things: girl) or how much morning sickness a woman experiences (more sick: girl).

Mystery accompanied fault-finding. Until recently women had limited legal power or autonomy over their bodies and shouldered blame for their child not meeting social expectations. During the Renaissance, the theory of maternal impressions warned that every thought a woman had affected an unborn baby. If a child was born with abnormalities, those were thought to have been caused by the mother’s thoughts. Some cultures believed that women were able to control the baby’s sex. Even today, women are still blamed for birthing the wrong gender, though we now understand that the baby’s sex is determined by the sperm.

With scientific advances of the 20th century, the puzzling, worrisome, and solitary experience of pregnancy gave way to a glut of information, advice, images, and a new set of expectations. Some developments gave women control. The history of the pregnancy test shows how this technology allowed women to confirm pregnancy earlier than ever before and privately make decisions about it.

Scientific advances also meant more opportunities to connect with an unborn child. Fetal ultrasounds, originally used only to diagnose problem pregnancies, have become emotional occasions during which parents bond with their fetus and even discover its sex. Some parents pay for private 3D-ultrasound viewings solely so that they can look at their baby.

But the medicalization of pregnancy, which Robbie Davis-Floyd refers to as the technocratic model of birth, led to power shifts. Women actually lost control over their bodies as the people around them became fixated on the growth of their fetus. Machines and tests used by doctors replaced instinct and feedback from mothers to assess the progress of pregnancy.

Furthermore, expectant parents are expected to share ultrasound pictures with the rest of the world, even to upload them to social media sites like Facebook or to post online videos. Television programs use ultrasounds as a form of entertainment. Social pressures on women ask them to examine the air they breathe, monitor what they eat, and measure their levels of stress, all in the name of having a healthier fetus. While some of this research may lead to healthier babies, it also brings increased judgment of, and restrictions on, pregnant women.

During the Renaissance, the theory of maternal impressions warned that every thought a woman had affected an unborn baby. If a child was born with abnormalities, those were thought to have been caused by the mother’s thoughts.

The medicalized pregnancy has also become a commoditized one. Outside experts have come to dominate pregnancy advice. Hotels sell baby-making packages, gyms offer pregnancy yoga and massages, and an entire market is devoted to products supposedly educating the fetus in the womb.

Amidst all these pressures there has arisen a greater desire for rituals, like belly-bump photo sessions, belly tattoos, and elaborate baby showers. The months of pregnancy are now divided into smaller and smaller segments, each filled with invented customs.

The gender reveal party has become yet another ritual, and a way to retrieve the mysteries of pregnancy. If, during the age of the mysterious pregnancy, a pregnant woman had little power but much knowledge about her body—knowledge that others depended on her to reveal—gender reveal parties reclaim the privilege of revelation, along with some control. Parents can orchestrate these parties, choose their rituals, and plan for the future with the knowledge that they are likely to survive childbirth. The ritual includes birth partners, allowing them to share in this womb time, just as they expect to be involved in egalitarian parenting after the birth.

But the logic behind gender reveal parties contradicts many of our current sensibilities about gender. First, there’s the name: It should really be called a sex reveal party, since sex is a function of one’s DNA. These parties conflate sex and gender. As the French philosopher Simone de Beauvoir said, “One is not born, but rather becomes, a woman.” A person’s gender identity may not match the sex they were assigned at birth, and gender roles are culturally constructed notions.

Gender reveal parties thus contrast with recent progress in the United States, including more rights for transgender people and those who are gender-nonconforming. Many families today wish for unlimited possibilities for their children, regardless of sex or gender. Some parents intentionally choose names that do not signal male or female. They cheered when McDonald’s announced that it would stop asking children if they wanted a boy or girl toy with their Happy Meal. Some parents buy from fashion lines that market gender-neutral clothing for infants. A ritual that emphasizes the importance of sex or gender seems to go against such progress, especially with oddly anachronistic themes like “Little Man or Little Miss” and “Bows or Bowties.”

Moreover, the new ritual of the gender reveal party might offer women only pseudo-power. When others are brought into pregnancy—not only doctors and friends and relatives but also cake decorators and party planners—women cede control over what’s happening in their bodies. Projecting human attributes onto the fetus makes it easier to imagine that it is a baby at an earlier stage, which also shifts power away from a woman’s control of her own body.

Still, the desire to create new rituals surrounding birth makes sense to me. When we have constant information at our fingertips and share our innermost thoughts with others, the idea of having one aspect of life where we control the mystery and create suspense for others is seductive. The birth story I share with my daughter is special in part because it provides us with an origin story of our own. Humans need stories, myths, and rituals along with our neonatal vitamins and ultrasounds.

Once we’ve cut the cut the cake and publicly declared “It’s a girl” or “It’s a boy”—what do we want that to mean? What’s troubling about the gender reveal party is that it’s a new ritual that doesn’t take us forward. Rituals that recreate the mysteries of the past must remember the history of struggles for the hard-won freedoms and empowerment that came with them. A ritual that sexes and genders a person before they are born places limits rather than offers possibilities on who they may become.