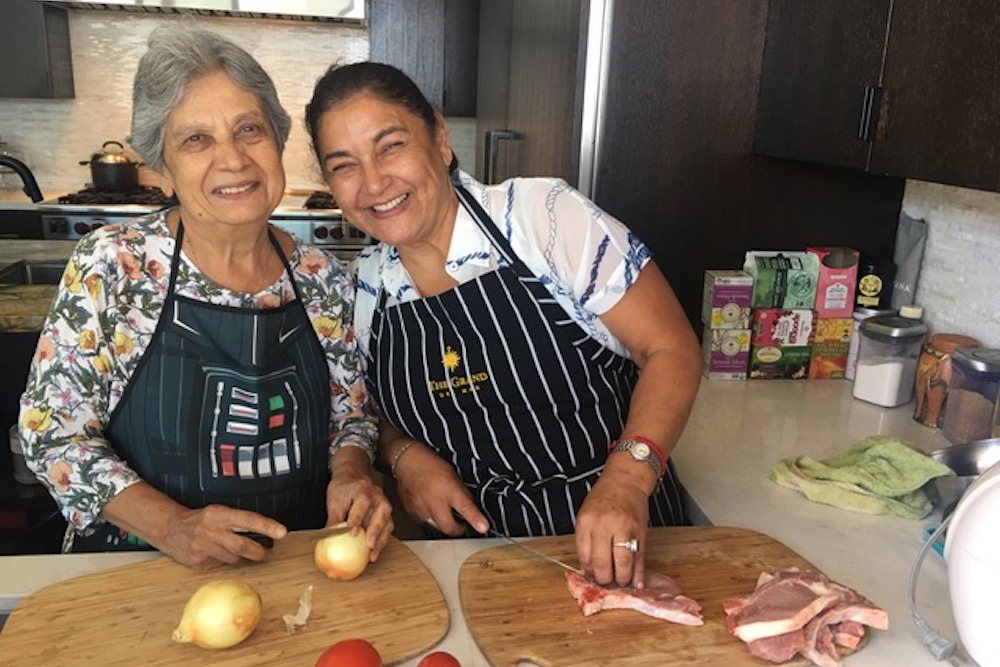 It’s a paradox, both of our globalized culture and of Los Angeles: My mother’s quest to cook authentic Indian food when she visits here has taught me a lot about Mexican and Mexican-American cuisine.

I’m not the only one benefiting from this lesson. When my mother, Alicia Mayer, flies in from India and stays with us at our home in West L.A., my friends invite themselves over for lunch, dinner, and even breakfast, because she is incapable of cooking small servings and hates to see leftovers. My kitchen is then filled with simmering pots, intoxicating smells, and hungry people.

Her desire to feed and nourish stems from her life’s calling as a teacher. The school she runs in Dehra Dun—a small town in the foothills on the Indian side of the Himalayas—caters to children with learning disabilities, and those who have fallen between the cracks in a sprawling mass education system that misses children with alternative learning styles. On a recent visit to Los Angeles, she was eyeing my sons’ old laptops, and when I offered to buy her new ones for her school, she said that her students would feel intimidated by shiny new computers.

It’s this ability to see true value in the slightly tarnished that also makes her such an ace in the kitchen.

Her town in northern India is known for producing the highest quality basmati rice, unmistakable in its fragrance and long-grained fluffiness. Rice is the canvas on which the intricate flavors of Indian food are painted. However, even the most complex curry has a humble beginning in chopped onions and tomatoes.

Make that a very humble beginning. When I took her to Gelson’s, as part of a daughter’s attempt to impress her with L.A.’s high-quality grocery produce, she looked at the beautifully ripe and polished tomatoes and said that she would feel bad cutting them up for a curry. The neat, well-lit aisles felt more like museum installations than a grocery store to her. So I took her to Whole Foods instead—after all, their produce is laid out in a more rustic décor. But there she complained that they didn’t even have “basic” ingredients like curry leaves and bitter gourds. (Sorry Amazon/Whole Foods, you’re going to have to ramp up your world food offerings to impress my mother!)

Enter Leticia Lara, our energetic home cook, who specializes in Mexican food. She took my mother to the mercados of East L.A., which turn out to be a paradise for Indian cooks. My mother joyfully picked out fruits and vegetables from the rejected produce areas, because those make the best ingredients for curry. Unripe mangoes can be turned into a savory-tangy chutney. Slightly moldy eggplants are smoked and tossed with fried onions into a bharta. And discarded flour tortillas are transformed into casings for spicy samosas.

Indian and Mexican food share several basic ingredients. Rice is a standard side dish for a curry or mole; tortillas or roti can be rolled up or broken off and used in place of silverware; boiled or refried beans and lentils cut the spiciness of a kabab or fajita. Cumin adds earthy goodness to protein, turmeric gives rice a golden glow, and cilantro is liberally used as garnishing in both cuisines. And what’s a good tortilla chip or poppadum without a dash of red chilies sprinkled on top?

Leticia and my mother have ventured into homespun Indian-Mexican fusion dishes, much to the delight of my children. We eagerly dine on sopes topped with shredded Tandoori chicken, burritos filled with flavorful vegetable pulao, and black beans seasoned with dried red chilies and mustard seeds.

Indian and Mexican food share several basic ingredients. Rice is a standard side dish for a curry or mole; … boiled or refried beans and lentils cut the spiciness of a kabab or fajita.

Their collaborative efforts in the kitchen spring out of each woman’s need to, quite literally, bring something to the table. When Alicia drizzled her mint-cilantro chutney atop Leticia’s Mexican street tacos, we reeled with the burst of unexpected flavor and spice.

That got them started on their wonderful collaboration. They soon realized their mutual preference for starting every recipe from scratch without the shortcuts of the average home cook, like using frozen chopped vegetables or a pre-mixed marinade. And most specially, they both share the hallmark of a great cook, whose aromas draw people into the kitchen like a magnet.

There were some hurdles to overcome, like incredibly different accents and the difficulty of translating names of vegetables from Hindi into Spanish. Papita is potato in Spanish, but it means papaya in Hindi. Trust me, you don’t want to eat a samosa stuffed with papaya!

Now that they are several years into their collaboration, they have worked out most of the kinks. Though it’s still hilarious to hear my mother giving Leticia directions to the Indian store. Their friendship runs so deep that I’m often put on hold when I call my mother in India, because she is face-timing with Leticia about a new dish they want to try out.

My feelings of India-Mexico connection go beyond my taste buds. As I make my way around Southern California, I am often mistaken for being Mexican—so often that I decided to delve deeper into the historic yet underreported relationship these two countries share.

Mexico, it turns out, was the first Latin American country to recognize India’s independence in August 1947. And, according to to Deborah Oropeza Keresey’s history The Asian Slavery in the Viceroyalty Of the New Spain, 1565-1673, the earliest person known have to traveled from India to Mexico was a slave girl from Calicut, in southern India, who arrived with Juan de Umbrage, the Franciscan Bishop of Mexico, in the mid-16th century.

And guess what? She was a cook!

South Indian cuisine is rich in pepper, coconut, and ginger. Its recipes entail marinades and slow-cooking in earthen pots to draw out the complex spices. Preparing a mole sauce is very similar to preparing a rich curry. It is likely that hundreds of years ago, Spanish colonial trade ships carried not just slaves from India but also its flavors, seasonings, and cooking styles, and eventually brought them to the New World.

The present-day culinary collaborations of my mother and Leticia convince me that these two countries, separated by two oceans, are home to the same people—just different shades of brown.