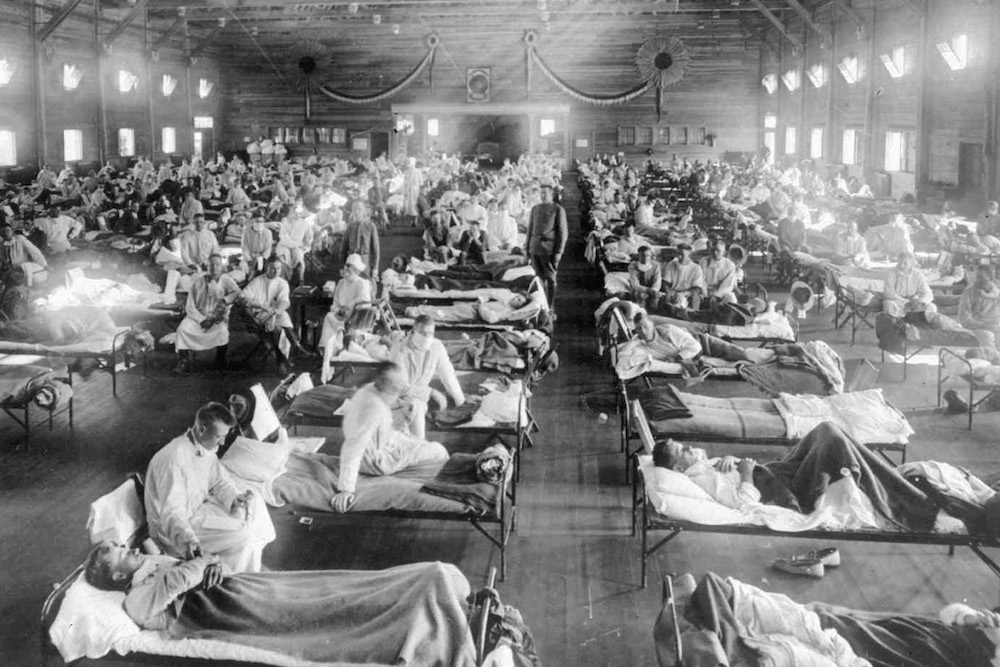 In this 1918 photograph, influenza victims crowd into an emergency hospital at Camp Funston, a subdivision of Fort Riley in Kansas. Photo courtesy of the National Museum of Health/Associated Press.

Nearly 100 years ago, in 1918, the world experienced the greatest tidal wave of death since the Black Death, possibly in the whole of human history. We call that tidal wave the Spanish flu, and many things changed in the wake of it. One of the most profound revolutions took place in the domain of public health.

The world was a very different place in the first decades of the 20th century. Notably, there was no real joined-up thinking when it came to healthcare. Throughout the industrialized world, most doctors either worked for themselves or were funded by charities or religious institutions, and many people had no access to them at all.

Public health policies—like immigration policies—were colored by eugenics. It was common for privileged elites to look down on workers and the poor as inferior categories of human being, whose natural degeneracy predisposed them to disease and deformity. It didn’t occur to those elites to look for the causes of illness in the often abject living conditions of the lower classes: crowded tenements, long working hours, poor diet. If they sickened and died from typhus, cholera, and other killer diseases, the eugenicists argued, then it was their own fault, because they lacked the drive to achieve a better quality of life. In the context of an epidemic, public health generally referred to a suite of measures designed to protect those elites from the contaminating influence of the disease-ridden rabble.

The first wave of the Spanish flu struck in the spring of 1918. There was nothing particularly Spanish about it. It attracted that name, unfairly, because the press in neutral Spain tracked its progress in that country, unlike newspapers in warring nations that were censored. But it was flu, and flu as we know is transmitted on the breath—by coughs and sneezes. It is highly contagious and spreads most easily when people are packed together at high densities—in favelas, for example, or trenches. Hence it is sometimes referred to as a “crowd disease.” 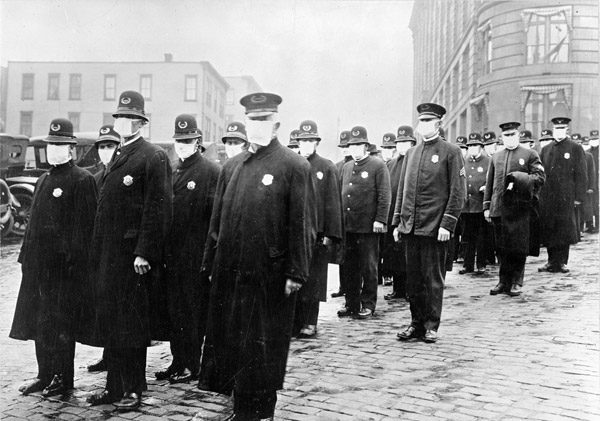 Policemen in Seattle wearing masks made by the Red Cross during the influenza epidemic, December 1918. Photo courtesy of the National Archives.

That first wave was relatively mild, not much worse than seasonal flu, but when the second and most deadly phase of the pandemic erupted in the autumn of 1918, people could hardly believe that it was the same disease. An alarmingly high proportion of patients died—25 times as many as in previous flu pandemics. Though initially they reported the classic symptoms of flu—fever, sore throat, headache—soon they were turning blue in the face, having difficulty breathing, even bleeding from their noses and mouths. If blue turned to black, they were unlikely to recover. Their congested lungs were simply too full of fluid to process air, and death usually followed within hours or days. The second wave receded towards the end of the year, but there was a third and final wave—intermediate in virulence between the other two—in early 1919.

Flu is caused by a virus, but virus was a novel concept in 1918, and most of the world’s doctors assumed they were dealing with a bacterial disease. This meant that they were almost completely helpless against the Spanish flu. They had no flu vaccine, no antiviral drugs, not even any antibiotics, which might have been effective against the secondary bacterial infections that killed most of its victims (in the form of pneumonia). Public health measures such as quarantine or the closing of public meeting places could be effective, but even when they were imposed this often happened too late, because influenza was not a reportable disease in 1918. This meant that doctors weren’t obliged to report cases to the authorities, which in turn meant that those authorities failed to see the pandemic coming.

The disease claimed between 50 and 100 million lives, according to current estimates, or between 2.5 and 5 percent of the global population. To put those numbers in perspective, World War I killed about 18 million people, World War II about 60 million. Rates of sickness and death varied dramatically across the globe, for a host of complex reasons that epidemiologists have been studying ever since. In general, the less well-off suffered worst—though not for the reasons eugenicists proposed—but the elites were by no means spared.

The lesson that health authorities took away from the catastrophe was that it was no longer reasonable to blame an individual for catching an infectious disease, nor to treat him or her in isolation. The 1920s saw many governments embracing the concept of socialized medicine—healthcare for all, delivered free at the point of delivery. Russia was the first country to put in place a centralized public healthcare system, which it funded via a state-run insurance scheme, and others in Western Europe followed suit. The United States took a different route, preferring employer-based insurance schemes, but it also took measures to consolidate healthcare in the post-flu years.

Privileged elites looked down on workers and the poor as inferior, … whose natural degeneracy predisposed them to disease. It didn’t occur to those elites to look for the causes of illness in the often abject living conditions of the lower classes: crowded tenements, long working hours, poor diet.

In 1924, the Soviet government laid out its vision of the physician of the future, who would have “the ability to study the occupational and social conditions which give rise to illness and not only to cure the illness but to suggest ways to prevent it.” This vision was gradually adopted across the world: The new medicine would be not only biological and experimental, but also sociological. Public health started to look more like it does today.

The cornerstone of public health is epidemiology—the study of patterns, causes, and effects in disease—and this now received full recognition as a science. Epidemiology requires data, and the gathering of health data became more systematic. By 1925, for example, all U.S. states were participating in a national disease reporting system, and the early warning apparatus that had been so lamentably lacking in 1918 began to take shape. Ten years later, reflecting the authorities’ new interest in the population’s “baseline” health, U.S. citizens were subjected to the first national health survey.

Many countries created or revamped health ministries in the 1920s. This was a direct result of the pandemic, during which public health leaders had been either left out of cabinet meetings entirely, or reduced to pleading for funds and powers from other departments. But there was also recognition of the need to coordinate public health at the international level, since clearly, contagious diseases didn’t respect borders. The year 1919 saw the opening, in Vienna, Austria, of an international bureau for fighting epidemics—a forerunner of today’s World Health Organization.

By the time the WHO came into existence, in 1946, eugenics had been disgraced and the new organization’s constitution enshrined a thoroughly egalitarian approach to health. It stated that, “The enjoyment of the highest attainable standard of health is one of the fundamental rights of every human being without distinction of race, religion, political belief, economic or social condition.” That philosophy wouldn’t eliminate the threat of flu pandemics—the WHO has known three in its lifetime, and will surely know more—but it would transform the way human beings confronted them. And it was born of an understanding that pandemics are a social, not an individual problem.