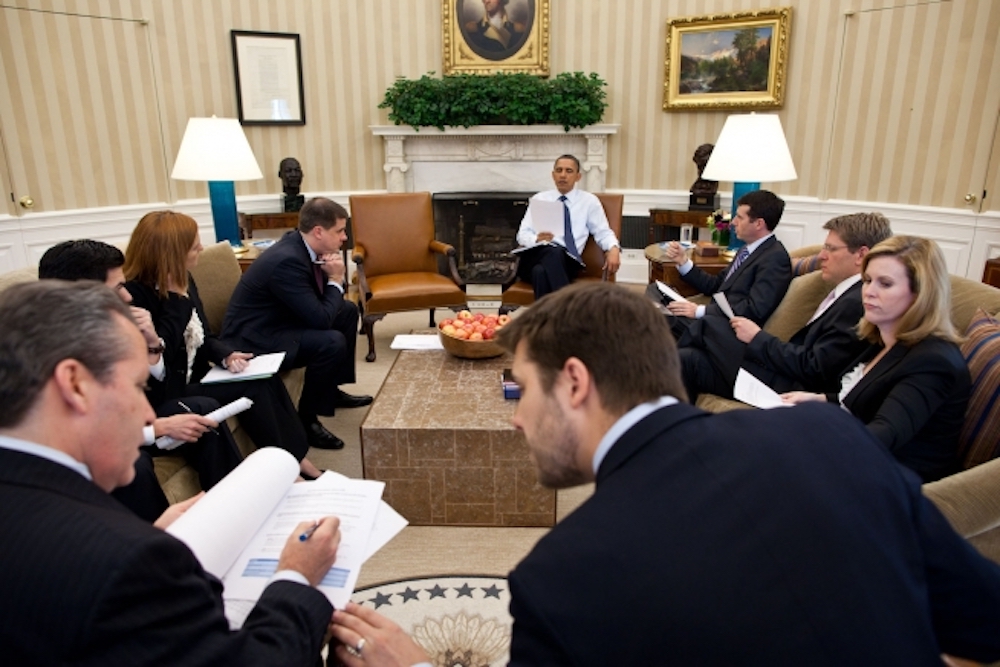 A White House staff meeting in the Oval Office, May 11, 2011. Photo courtesy of Pete Souza/Wikimedia Commons.

The stupefying deeds of the Trump White House are passing in such a blur these days that it is hard to parse the incompetence. From policies foreign and domestic that churn without solidifying, to presidential tweets that seem the products of insult comedians, to an obsession with fixing blame before even knowing results, this seems more a Three Stooges comedy than a functional administration.

One piece that is driving me absolutely nuts is the complete lack of any coherent White House staff structure. I spent nearly five years as a deputy communications director on the staff of California Governor Gray Davis. Despite turmoil, I happen to think we did pretty well in the middle of a political shooting gallery.

Whatever our administration’s faults, we had a well-ordered staff structure of the sort that a governor or a president needs. The required elements include a specific set of duties for everybody, an efficient process for analyzing and guiding legislation, smooth information dissemination, a polished rapid response system, and a smooth flow of staff internal communication.

Gray was accessible to all of us on staff. But you knew damn well you’d better not skip steps in moving a piece of the agenda. Any competent high-level elected official’s staff works the same way. I’ve experienced as much working for others.

Trump’s staff, by contrast, has no visible structure that I can discern. On Gray’s team we had a chief of staff, Lynn Schenk, who was tough, decisive, and stood just below the governor in the command structure. She was absolutely in charge as far as we were concerned.

If she issued a directive it was as if it came from Gov. Davis himself. We could discuss it, even offer suggestions. But when the decision was made, we carried it out to the letter. It was not just that people had job titles; Trump’s staff have titles. It was that each of us was an expert in her or his field, and the staff stayed within its assigned parameters. The communications department, where I worked, dealt with press relations, speechwriting, op-ed writing, and public relations—period. I was not assigned unexpectedly to vet potential judicial appointments, or construct an economic policy.

Nor did we get assignments because we were cronies of the governor. Yeah, we respected him; we worked there because we believed in Gray’s philosophy of governing. We were trusted because we did our jobs, not necessarily because we were friends.

Harry Truman supposedly said, “If you want a friend in Washington, get a dog.” We weren’t the governor’s or the chief of staff’s friends. But we were collegial. So, despite the insanity of the energy crisis of 2000-2001, and the subsequent recall election, we accomplished a lot.

Whatever our administration’s faults, we had a well-ordered staff structure of the sort that a governor or a president needs. The required elements include a specific set of duties for everybody, an efficient process for analyzing and guiding legislation, … and a smooth flow of staff internal communication.

As to leaking—we didn’t. Why would we? Leaks were unauthorized information going out before it should be released. All that would do would be to sow seeds of disruption for our policies. My boss, the communications director, who had a long history as a news reporter, said that on his first day at the governor’s office he found himself with information on so many policies that he was in agony over not being able to write about them. He joked that he spent his whole first week just leaking stories to himself.

What did we do then in emergencies? For most, we had prep already in place. Part of my job was to run our rapid response system. That didn’t mean having a line of bull ready to release. It meant learning of dangers before the fact and preparing. I ran a call every morning with staff statewide to learn about potential issues. We then informed appropriate responders and prepared an action plan.

Sometimes we were slow off the mark, because complex issues, even when learned about early, take time to respond to. For this we got accused of being slow or too careful. But we were thorough, consulted subject experts, and looked for the best plan. The announcement of our actions always followed our consideration. We didn’t rant first and act later, if at all.

And we didn’t act in secret or hide the ball. We didn’t act vindictively. You can’t govern that way. At least not for long. Sadly, Gray got tagged with being reluctant to act and got thrown out for it in the recall. In truth, he and the rest of us were simply careful and deliberate.

Trump’s operation (I hesitate to call it a staff), appears to be a collection of yes men and women, who in his presence answer to him only, but who, away from Trump, conduct their business as if they were ministers without portfolio, doing and saying as they please until they get caught at it. You are Trump’s trusted dog’s body until he tires of you or needs a patsy, then off with your head.

One thing striking to people who work in an office environment is how various officials, including the short-lived Anthony Scaramucci, got a license for direct access to Trump. In any sane organization, there is a chief of staff who is the gatekeeper to all. Nobody (absolutely nobody) should have such special access. Such arrangements smack of mafia dons giving access to a secret consiglieri. Who else has secret access? Well, it’s a secret, so we don’t know.

I have long thought Trump to be mentally unstable. His paranoid twitter rants, his attraction to conspiracy theories, his attachment to unsavory characters with no business in politics, his love-hate affiliation with Vladimir Putin, his sudden shifts of temper against China and NATO and many other allies, his belief (real or purported) that all news and news sources are fake, all point to mental instability.

What to do in this case? There is, of course, the complicated process of impeachment. But if the president is incapacitated, the 25th Amendment to the U.S. Constitution provides a well-defined replacement structure, empowering the vice president and the majority of cabinet or congressional leaders to remove the president. No impeachment needed.

Angry tweets may be red meat to your base. But they mainly signal turmoil. A leader can only be as effective as the information he/she receives. And that comes from a trusted and well-ordered staff that works as a team, especially in troubled times.