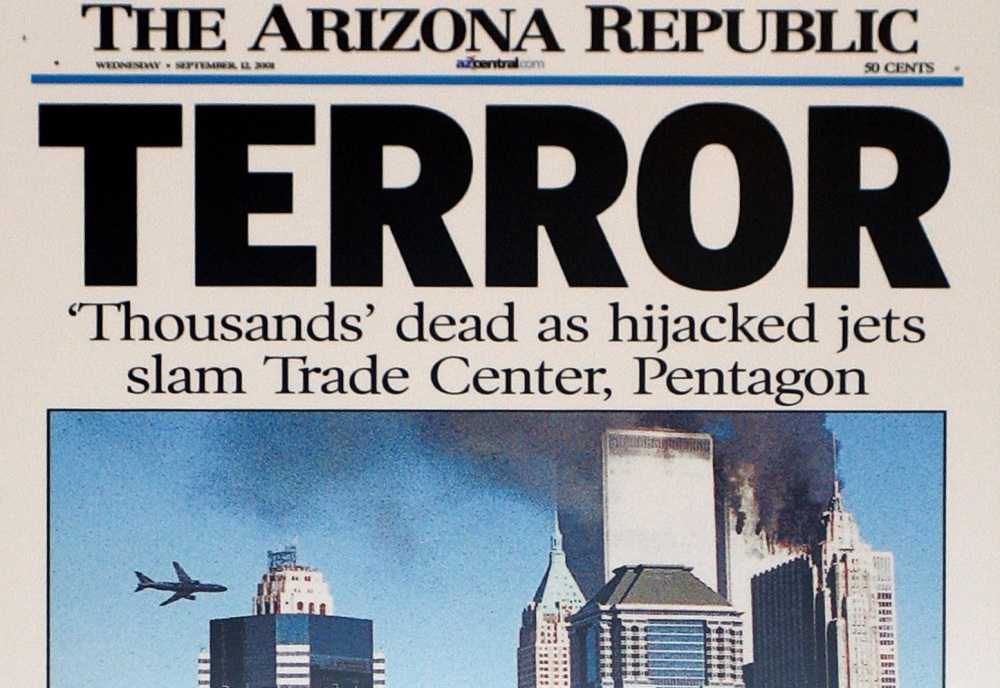 The front page of The Arizona Republic on September 12, 2001. Photo courtesy of Flickr.

In the midst of the Second Intifada, in summer 2001, I was living in the dorms at Hebrew University in Jerusalem. Normally bustling streets were nearly empty. Signs in store windows offered discounts for the “brave tourists” who ventured inside despite the growing violence and tension. Being constantly on alert exhausted me, a short-term visitor insulated from many of the complexities of what was unfolding.

So I was relieved when I left the escalating tensions in Israel in August for the relative tranquility of Spain. And a week later, on the TV in my hotel room in Madrid, I saw a Jerusalem neighborhood I knew well turned into a chaotic mess by a suicide bomber.

A month later, I was back in the United States, living in Los Angeles, a place that feels safe to me, when terrorists crashed planes into the World Trade Center towers, the Pentagon, and a Pennsylvania field. Those attacks breached many Americans’ sense of national security in a way not known since Pearl Harbor. I had that same feeling I felt in Madrid a month earlier: A place I knew, New York, and buildings that I had been in, the Twin Towers, had been converted into a site of destruction and death.

Since 2001, I’ve felt this sense of dread and insecurity again and again. My work and research—understanding how religious communities are responding to the rapidly changing world—continue to take me across the globe, sometimes to violence-stricken locales.

I have traveled under armed guard with the Asia Foundation in Mindanao, Philippines, where a centuries-long conflict involving the Moro people in the Southern Philippines fighting against foreign governance later turned into a nearly 50-year-long separatist battle with different factions, bringing with it violence and terror attacks. On the first day of a trip to Nairobi in 2012, pregnant with my third child, I saw news of a shooting at a Sikh Gurdwara in Oak Creek, Wisconsin. In 2014, my flight from Amman, Jordan to Frankfurt, Germany was loaded with refugees who had fled ISIS’s grotesque violence in Iraq.

As often as I travel abroad, it seems as if there are more and more attacks closer to home. At a school in Connecticut, a nightclub in Orlando, a work party in San Bernardino, and this month a music festival in Las Vegas, individuals or small groups have murdered scores of innocent people. It seems as if this sort of exceptional violence is no longer exceptional, whether you’re overseas or in relative safety at home.

My travels have taught me another thing: not to retreat. Yes, after a trauma like the massacre in Las Vegas, it’s tempting to run away from other people and the places where they gather. But through experience, I’ve learned that living in fearful isolation is actually far scarier than moving through potentially hazardous places where I am challenged to confront the unfamiliar and my own assumptions about safety and security.

My family has constantly worried about my travels since I went to Jerusalem in 2001. But I’ve come to worry just as much about them. When I went to Uganda in 2015 with the U.S. Institute of Peace’s Generation Change program, it was a few weeks before the fifth anniversary of the Al-Shabaab attack on a soccer stadium in Kampala where hundreds were killed and maimed. Several of the young Ugandans we were training as peace-builders had survived that attack.

But after a long day of training in Uganda, news jarred me from back in the United States. A young white man had slaughtered nine souls in a black AME church in Charleston, South Carolina. And that church violence wasn’t new. Three of my colleagues at the Center for Religion and Civic Culture at the University of Southern California are ordained AME pastors, including Rev. Cecil L. “Chip” Murray, who was once so reviled by white supremacists that that they plotted to blow up Los Angeles’ First AME Church, where he was senior pastor.

The violence we experience through the media often feels immediate and visceral, making our own surroundings feel unsafe. Thanks to our access to news around the globe, we can empathize with the victims of the shooting in Las Vegas and the truck bombing in Mogadishu, Somalia.

Thankfully, the FBI foiled their plan, and Rev. Murray remained undeterred in confronting the perpetual sources of violence that his community faces. But that connection, as I sat in my Uganda hotel room taking in tragic news, made the attack on the Charleston AME seem more worrisome than any potential violence I faced overseas.

Of course, my worries are part of the problem. The violence we experience through the media often feels immediate and visceral, making our own surroundings feel unsafe. Thanks to our access to news around the globe, we can empathize with the victims of the shooting in Las Vegas and the truck bombing in Mogadishu, Somalia. And that is a critically important thing for all of us to do. The focus on unimaginably terrible mass casualty news events also distorts our ability to assess our own risk. It makes every place feel unsafe at all times.

Violence is too much a part of human lives, particularly in places that lack economic and other resources, when people do not feel like they have access to power or where they are excluded and targeted because of their racial, ethnic, gender, political, or religious identities. It is this everyday violence that truly plagues us.

But it is obscured by exceptional violence—the type where individuals wreak carnage on a large group of bystanders—which truly is exceptional even if it feels as though it is ever-present.

It’s easy to forget the many hundreds of days before and after my visit to Uganda when there was no major terrorist attack in Uganda.

And even though it is exceptional, it is still far too frequent in the United States. There have been nine mass shootings in 2017 where a gunman indiscriminately killed four or more people in public.

Yet this exceptional violence can’t be allowed to control our actions. Threats and terror spread by white supremacists should not keep us from visiting black churches or standing with Muslim communities in the United States, just as fear of terrorist violence is no reason not to travel to Kampala, Jerusalem, Brussels, or Paris. And for people like me, whose work involves building peace and aiding people’s efforts to become architects of their own societies and to change the conditions that create violence, showing up is essential.

Human fears, of course, are no less real for being irrational. In my experience, I’ve found that preparing for the worst helps—getting trained for events, like how to respond to an active shooter, or learning vital skills like CPR or emergency first aid. I always know where my exits are. Preparedness goes hand in hand with the obligation to help, and a key way I navigate the world, not as an afterthought and not out of fear. I am more likely to use those skills to help someone having a heart attack or choking than to help a victim of exceptional violence.

When I returned home from my 2012 trip to Nairobi, during which a white supremacist killed six and wounded four others at a Sikh Gurdwara in Oak Creek, Wisconsin, I met with the leaders of a Sikh congregation in Los Angeles. We ate in the langar hall, where Sikhs prepare free meals daily as a service to those in need, a beautiful part of the Sikh tradition. I kept an eye on the door just about every second, trying not to be disrespectful to my hosts, who were eager to talk about how Sikhs could contribute to L.A.’s disaster response because of their daily mass meal preparation tradition. My hosts were alert, too, not only because of the Oak Creek massacre but because Sikhs have been targeted in violent attacks in the United States for decades. They also are prepared because their faith obliges them to help.

For those who aren’t in immediate danger, the point is not to ignore your fear but to put it into context, develop a sense of agency over it, and use that agency to fight the sources and conditions which bring about violence. Above all, we cannot let fear stall our progress, collapse our communities, or keep us at home. This is not tough talk. It is a vital strategy for a safer, saner world.