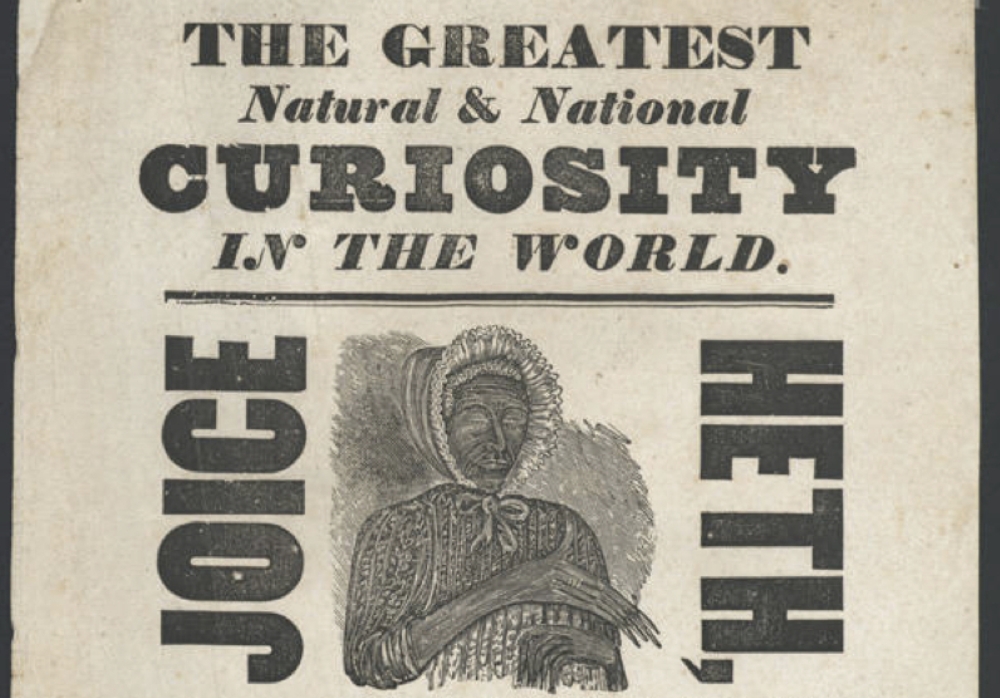 A poster touts the spectacle of Joice Heth, passed off by P.T. Barnum as the 161-year-old slave who raised the infant George Washington. Image courtesy of J. Booth & Son/Wikimedia Commons.

In 1835, Phineas Taylor Barnum was down on his luck and anxious to find an “amusement” that would attract paying customers. One lucky day a stranger came into the shop where Barnum worked and told him that he possessed half-ownership of a “curiosity”: a woman named Joice Heth who, the stranger claimed, was the 161-year-old slave who raised George Washington.

Barnum examined Heth and the stranger’s “proofs” about her age and provenance and, convinced of her seeming veracity, bought Heth from the stranger. Barnum, being “a student of human nature” as well as a natural showman, “spared no reasonable efforts” in drawing a crowd to see Joice Heth’s performances, in which Heth recounted tales of George Washington’s childhood. Barnum explained that he was “aware of the great power of the public press” and “used it” in any way he could, including printing “innumerable small bills,” flooding “the city with ‘posters’ setting forth the peculiar attraction which ‘the nurse of Washington’ presented,” and paying off editors to write up the story of Joice Heth in the most dramatic way possible.

Barnum’s advertising strategy depended “upon getting people to think, and talk, and become curious and excited over and about the ‘rare spectacle.’” His advertisements had one goal above all others: They were “calculated to extort attention.” His tool was hyperbole. While P.T. Barnum is often remembered as the founder of the Barnum and Bailey Circus—“The Greatest Show on Earth”—Barnum’s story is more broadly about America’s fascination with hyperbole and humbug.

Hyperbole is the rhetorical term for “excess” (Greek hyper “beyond” + bole “to throw,” to overthrow or throw beyond). Aristotle thought of hyperbole as a kind of metaphor, a comparison between a known thing and an unknown thing. In comparing something that is unknown to something that is already well understood, audiences would make sense of new information by using associational logic (a key form of Greek thought). Yet, Aristotle thought that because hyperbole relied on excessive exaggeration, it was a special kind of metaphor that took advantage of associational logic to distort reality. Therefore, those who used hyperbole abused the power of metaphor and demonstrated a “vehemence of character.”

In the 18th century, Joseph Priestley also saw hyperbole as a kind of metaphoric comparison that “exceeds the truth.” Priestley thought that hyperbole was justly used as part of the sublime, as an attempt to use words to describe the ineffable when “no expressions literally true sufficiently answer his purpose.” However, he thought that there were only a very “few circumstances” in which hyperbole could be used “with propriety.” Mostly, Priestley thought that hyperbole was unjustly used to appeal to “persons of little reading” who were particularly attracted to the “very extravagant” or the “marvelous and supernatural.” Hyperbole drew attention to itself, for the sake of merely drawing attention. For Priestley, hyperbole was like candy: It appealed to the very young, but it was too sweet for older people with more refined taste.

According to these accounts, hyperbole could only be used justly when an accurate description was beyond the power of human speech. All other incidences of hyperbole were an attempt to take advantage of the uninformed by misrepresenting what was not well understood.

But Barnum relished hyperbole precisely because it was the best way to reach the masses.

For a time, Barnum writes in his 1855 Autobiography, ticket sales for the Heth show were great and business was good and he was happy. He was sure to keep “up a constant succession of novel advertisements and unique notices in the newspapers,” which kept “old Joice fresh in the minds of the public, and served to sharpen the curiosity of the people.” However, soon disaster stuck. 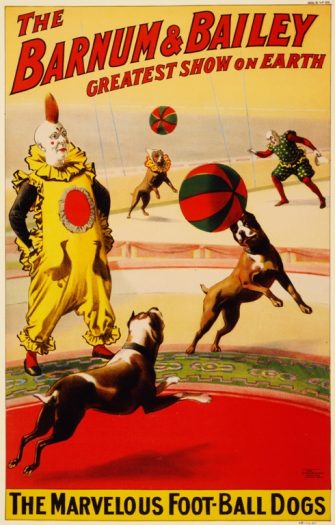 As Barnum tells the story: “A Visitor” wrote to one of the local papers and claimed that Joice Heth was not actually the 161-year-old former slave of George Washington as had been claimed, but was actually what the hip school kids of the 1750s had started to call a “humbug.” Joice Heth, “A Visitor” claimed, was a hoax.

Specifically, “A Visitor” believed that Heth was “not a human being,” but was “simply a curiously constructed automaton, made up of whalebone, India-rubber, and numberless springs, ingeniously put together, and made to move at the slightest touch, according to the will of the operator.” Barnum, “A Visitor” charged, was nothing more than a “ventriloquist” and all of the conversations that audiences had had with Heth about George Washington were “purely imaginary” and “merely the ventriloquial voice of the exhibitor.”

The attack on Heth didn’t hurt Barnum’s show; it made it bigger. Barnum would recall that “hundreds who had not visited Joice Heth were now anxious to see the curious automaton; while many who had seen her were equally desirous of a second look, in order to determine whether or not they had been deceived.” Barnum claimed that the automaton controversy led to even greater curiosity and even greater ticket sales.

Joice Heth passed away in early 1836, ending Barnum’s show but not the nation’s curiosity over Heth. Barnum took advantage of that interest, arranging another Heth show: 1,500 audience members paid 50 cents each—double what audiences had paid to see her alive—to watch as Dr. David L. Rogers conducted an autopsy on her body. According to the February 25, 1836 edition of The New York Sun, Dr. Rogers concluded that Heth’s “wonderful old age was a wonderful humbug.” While she was, in fact, a real person, she was nearer to 80 than to 160 years old.

But, Barnum had the last word. He planted a story with The Sun’s competitor, The New York Herald on February 27, 1836, which claimed that the Heth humbug story was itself humbug. In fact, reported The Herald on “good authority,” Heth was “not dead” at all, but alive and well in Connecticut.

While he is often remembered as the founder of the Barnum and Bailey Circus—“The Greatest Show on Earth”—Barnum’s story is more broadly about America’s fascination with hyperbole and humbug.

By 1855 when Barnum published his Autobiography he was world famous as an entertainment promoter: His American Museum, and shows featuring Heth, Tom Thumb, Feejee Mermaid, and the Swedish opera singer Jenny Lind, all had made Barnum famous and rich. Barnum’s “celebrity was his life’s work and his prize possession. He bragged about it, sued people over it, threatened to kill it, but most of all, he reinvented it,” according to one account of Barnum’s influence on American life. His Autobiography was his self-promotion vehicle; he constantly embellished, revised, and expanded it. Barnum’s goal in his Autobiography was to portray himself as the world’s most tricky and entertaining fellow.

Historians can’t seem to find primary-source evidence to support Barnum’s recollection of the exposé of Heth-as-automaton newspaper story, but the rest of this seemingly tall tale of American curiosity and humbug checks out. As Barnum explained in his 1866 book on The Humbugs of the World (which did not include his Joice Heth humbug), a humbug was a legerdemain, a slight of hand.

Why did Barnum’s hyperbole and humbug excite American audiences in the 19th century? For the same reason that it excites Americans today: We love to be amused and we love excess, and so we reward showmen with our attention. Some have said that we’re “amusing ourselves to death” and that we live in the “society of the spectacle.”

We’re especially attracted to hyperbole during times of great transition, when things are confusing and reality can be more easily distorted. Barnum knew this too: His “A Visitor” exposé/humbug relied upon the nation’s curiosity about the emerging technology of machinery, new commercial uses for India rubber, and new Northern concerns over the abolition of slavery.

Today is a another time of great transition and America’s showmen-leaders know it. During an election interview with NBC in 2016, Donald Trump said he had enjoyed being compared to P.T. Barnum. “We need P.T. Barnum, a little bit, because we have to build up the image of our country,” he said.

Ask yourself: Was Barnum and Bailey’s circus literally the “greatest show on Earth”? Of course not, that’s nonsensical hyperbole: “the greatest” can’t be proven or quantified. But in a supposedly classless society like America, such confident appeals to American greatness via hyperbole attract audiences. Americans are much more likely to describe their hamburger or pizza as absolutely “the world’s greatest” rather than as “probably” the best. Such exaggeration is a humbug, of course, but it’s also hyperbole: it compares the known (American hamburgers or pizza) to the unknown (the other hamburgers and pizzas of the world) and tells naïve Americans that theirs is best.

And we shouldn’t forget that “there’s a sucker born every minute.” Barnum has been credited with that phrase, but probably never said that. Of course, there’s a humbug that says he did.