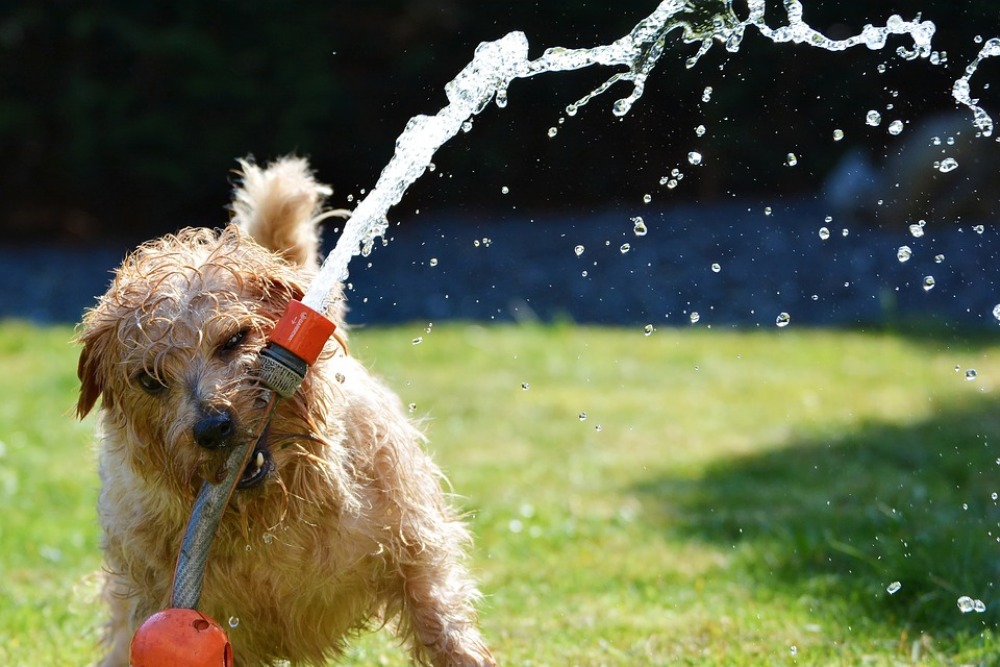 Grrrr! California’s water wars could turn into a dogfight, thanks to a deluge of precise new data. Photo courtesy of Pixabay.

If you thought California’s famously bitter water wars were hard-fought, just wait until you see our water data wars.

Californians fight over water because we all need it and there is rarely enough to satisfy the full needs of many competing interests—farmers and fishermen, environmentalists and industry, state and local water agencies, and, of course, residents. In this way, California water history mirrors that of the entire state: Californians’ desires always outstrip our abundance, and we never stop battling over how to divide things up.

Now, digital tools are expanding the breadth and intensity of conflict. Governments, companies, and nonprofits are able to measure California water and all its uses with newfound accuracy and detail.

This advance holds great promise. California may be able to use newly accurate information to build more water-efficient products, make water-conservation a way of life, and replace expensive and inefficient infrastructure.

But the abundance of water data—in combination with the scarcity of water—effectively makes every piece of land and every drop of water in California the subject of measurement—and conflict. The data also exposes the fragmentation and deficiencies of California’s patchwork system of water management.

The state’s new conservation requirements add to the stakes of arguments over data. As Californians struggled to save every drop of water during the recent five-year drought, the state for the first time imposed mandatory restrictions on water use—requiring that 400 local water agencies figure out how to reduce usage by 25 percent in 2015. That shift, which followed 2009 legislation setting a goal of reducing per capita water use in urban areas by 20 percent by 2020, has changed the way Californians fight over water—away from historic battles over dams and infrastructure, and toward new fights over how to maximize the water we already have.

Among the questions to which new data is being applied: How many of the hunches and best guesses that the state has used to make water decisions traditionally are actually correct? What incentives will convince most people to remove their grass lawns and, if they do, how much water do those removals save? How much water do efficient toilets and appliances really save? Exactly how much water are we losing to leaks—and where can we make the most efficient investments to stop them?

And these questions are small compared to a bigger-picture quandary: Can data help us to integrate our water use with our electricity and gas use—making ourselves so efficient that we effectively mitigate the effects of climate change?

The good news is that there is data—from governments, universities, nonprofits, and private researchers—to begin answering such questions. The bad news is that there is not yet enough such data, and there are all kinds of questions about the accuracy of the data we do have. How accurately are we measuring, for example, evapotranspiration—the process by which water is transferred from the land to the atmosphere both by evaporation from soil and by transpiration from plants? And should that be measured by high-flying aircraft equipped with sensors, by weather stations, or estimated by computer models?

Another question is whether we are accurately able to measure land, say with landscaping or dry brush on it, to determine how much could be replaced by more water-efficient plantings. (Importantly, these measurements could be used to determine when an area has too much burnable brush that may constitute a fire danger before seasonal fires hit, potentially preventing or limiting the catastrophes that have hit Santa Rosa and other cities this year.)

This is not easy work. When a state pilot project tried to measure landscape, they found that among 20 water agencies, there was no consensus on defining landscape areas or how to calculate them. Similar questions worm through other data, both at local and state level.

These issues are not petty—they are also questions of justice. How much water savings can we demand from farmworker housing that draws on groundwater in the fields? Or how do you measure the right use of water on a golf course or, say, a large public park with multiple water meters?

In this context, the highly publicized controversy over the California Water Fix—Gov. Jerry’s Brown proposal to build tunnels under the Delta to convey water to the San Joaquin Valley and Southern California—feels like an anachronistic repeat of decades-old dramas about dams and peripheral canals. Instead, California’s water world is more likely to divide over who controls the data and what it justifies. The state government and statewide interests, like the environmental lobbies, want more centralized control and restrictions, while local water agencies want to use data to enhance local flexibility.

The state vs. local tensions are playing out in an ongoing fight over two related pieces of legislation—SB 606 and AB 1668—that seek to establish a management regime to realize the governor’s framework for “making water conservation a California way of life.” Much of the energy of the fight is over bureaucratic control—what powers will the State Department of Water Resources have to set and enforce standards, and what powers will be left to regional or local agencies? But questions over data, its reliability, and its use shadow every piece of the bills.

The legislative battle has offered an opening for tech-savvy enterprises—including nonprofits and collaboratives led by younger and newer water war combatants. One L.A.-based nonprofit, ARGO, argues that much of the data undergirding California water use is old or faulty.

In an open letter released during the fight over the legislation this summer, ARGO’s Patrick Atwater pointed out that California is watering mostly blind. State water agencies don’t have accurate land use information, don’t have landscape area definitions, and don’t have accurate service area boundaries for local water retailers.

Instead of dividing up bureaucratic responsibility, California should focus on developing better-quality data and using it to design a new 21st-century system of water governance, Atwater argued.

“There is an urgent need to modernize how California’s water agencies manage data,” he wrote, adding, “Achieving the broader urban water efficiencies will require creativity and finesse, not simply command and control regulation.” ARGO called for a one-year task force to aggressively address these issues, with an emphasis on open-source data gathering, a centralized data repository, and more local control of both water management and data gathering.

This sounds hopeful, but it also begs the question: whose data and whose standards?

Soon we may be re-litigating virtually every piece of California’s already well-litigated water system. In the long run, perhaps it could lead to a major restructuring—the combining of agencies (ARGO is urging a consolidation of state water agencies), establishing new standards and protocols and models, based on new information.

But for now, disruption means war. Leave your guns at home, please, but bring your data.