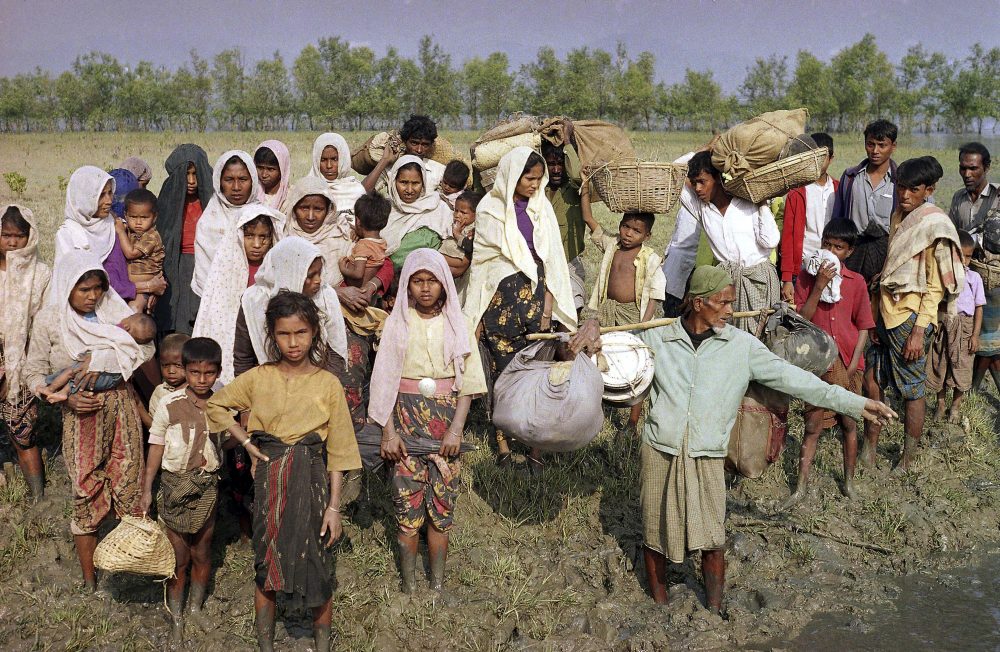 In a recent interview with a Guardian journalist, the Burmese monk U Rarzar expressed his country’s rationale for fearing and repressing its Muslim minority. “[The] Ma Ba Tha is protecting people from terrorists like ISIS,” U Rarzar told the British newspaper. “Muslims always start the problems, such as rape and violence.” While U Rarzar’s comments might seem shocking, they repeat a script that Burmese Buddhists have said for almost one hundred years.

The fear, suspicion, and ill will, if not active hatred, that Burmese Buddhists bear toward Muslims is pervasive. It is a kind of ideological indoctrination that permeates the society in ways both subtle and overt. Buddhists across Burma (also known as Myanmar)—whether they are Buddhist monks, nuns, or laity—have expressed fear that their Burmese Buddhist identity is under threat of extermination. In Myanmar, it is popularly understood that to be Burmese (the nation’s largest ethnic group) is to be Buddhist. As such, a threat to Burmese Buddhism is seen as an existential threat to the nation.

The escalating persecution and genocide of Myanmar’s Muslim minority, the Rohingya, has deep roots in the country’s Buddhist institutions. The Ma Ba Tha that U Rarzar refers to translates to Association for the Protection of Race and Religion. It is well-known for its community outreach programs, legal clinics, donation drives, and its advocacy for Buddhism. Its membership consists of both monastic and lay Buddhist members.

The Ma Ba Tha is also known for its members’ active persecutions of the Rohingya Muslims in far western Burma’s Rakhine State. The attacks against the Rohingya in recent weeks have aroused international condemnation of Burma’s military government and of Aung San Suu Kyi, the formerly revered Nobel Peace Prize-winning politician who is Burma’s de facto civilian leader.

The Ma Ba Tha has been among the most vocal promoters of the notion of an imminent Muslim takeover in the country. In order to address these concerns, in 2015 the Ma Ba Tha supported the passing of four laws, collectively known as the “Race and Religion Protection Laws.” These laws were specifically designed to control the Muslim population’s growth through regulating birth rates, marriages, and conversions. Yet even with these laws in place, there is a rising fear and anxiety among Burmese Buddhists, who believe that the Muslim threat of extermination is nigh.

In fact, the country’s statistics show no such threat. Home to 55 million people, Myanmar has a population that is roughly 88 percent Buddhist. During the 1970s and 80s, the Muslim population stood at 3.9 percent. In the most recent census data from the Burmese Ministry of Labor, in 2016, the Muslim population had risen to 4.3 percent. However, the largest concentration of Muslims in Myanmar is the Rohingya, who have lived in Rakhine State, on the border with what is now Bangladesh, since the 1800s. While their numbers have increased over the years, their proportion of the national population has remained relatively constant.

If these numbers are accurate, why do Myanmar’s Buddhists exhibit such anxiety and fear?

Part of the answer lies in history. During the British colonization of Burma (1824-1948), there was a steady flow of South Asian immigrants into Myanmar. The British interpreted the developing South Asian Muslim community as evidence of modernization. Unfortunately, this colonial preferential stereotyping also divided South Asian Muslims from their Burmese Buddhist counterparts.

The British occupation of Burma, promotion of Christianity, and the lauding of non-Burmese Buddhists, sparked organized Buddhist responses, such as the Young Men’s Buddhist Association (YMBA), which sought to revitalize Burmese Buddhism. At the same time, South Asian Muslims were derided with the derogatory label “kalars,” due to their religion and darker skin color. Burmese Buddhists viewed South Asians as both polluting the reputation of the country, and as contributing to the eradication of Burmese Buddhists within their own country.

In the 1930s, Burma began boycotting “Indian goods.” Authoritative organizations such as the Legislative Council of the Governor of Burma characterized the continual immigration of South Asians as turning Burma into a dumping ground. The racialization of South Asian Muslims was not unique to Myanmar. In other Southeast Asian countries such as Thailand, South Asian Muslims and Malay Muslims have been labeled with the derogatory term khaek, another reference to skin color.

It would be easy to discount the atrocities taking place in Myanmar as an aberration. Unfortunately, the country’s history offers a very different assessment. Sadly, this is not a new issue, but it is a new chapter.

From the 1930s onward, there were periodic anti-Muslim riots and pogroms. According to Nyi Nyi Kyaw, a postdoctoral fellow at the Centre for Asian Legal Studies, at the National University of Singapore, who has written extensively on the history of anti-Muslim feelings in Myanmar, the Burmese Buddhist attacks focused primarily on the South Asian Muslims, such as Bengali Muslims. Many of these people emigrated from the Indian state of Bengal and what is now Bangladesh. These attacks continued throughout the Burmese military junta’s reign, from 1962 to 2011.

This background becomes crucial in understanding the power behind the recent Rohingya narratives in the media. When high-ranking Buddhist monks such as U Wirathu remind their Buddhist audiences about the dangers of Islam, and reference the kalars—likening the Rohingya to wild dogs or African carp—they are making use of a well-rehearsed racist narrative. This racism fuels fears of pollution, and stokes the fires of hatred and desire to commit violence. It also allows the Burmese Buddhists to see the Rohingya as the “Other:” a caricature of the foreign as sub-human, with very little moral worth.

This campaign of dehumanization has been disastrous for the Rohingya. After widespread anti-Muslim violence in 2012, the Burmese government placed many Rohingya in camps. Despite severe criticism from international organizations including Human Rights Watch, International Crisis Group, and Amnesty International, the government forced more than 120,000 Rohingya to live in cramped spaces, without sufficient food, water, or medical attention. In 2014, The New York Times columnist Nicholas Kristof identified these areas as concentration camps and noted that physicians, including Doctors without Borders, were removed from the camps and not permitted to re-enter.

Buddhist authorities have fostered another narrative in Burmese history: the invasion and pollution of the Burmese Buddhist female body. With Myanmar’s Race and Religion Protection Laws, the Ma Ba Tha made women’s bodies the staging ground of a battle for Buddhism. The “Religious Conversion Law” “protects” Burmese Buddhist women from marrying Muslims and converting to Islam. U Wirathu has delivered sermons claiming that the Muslim strategy is to convert Buddhist women, impregnate them, and raise Muslims as enemies against the country. This tactic has not been overlooked by Hindu nationalists in India, who recently made allegations of Muslim plots to “seduce” their women.

Women’s bodies are not only protected, they are revenged in this narrative, with violent retaliation for the “pollution” of Burmese Buddhist womens’ bodies. The most recent chapter of anti-Muslim violence began in June 2012, over allegations that Rohingyas had raped a Rakhine Buddhist woman. Even though there was no legal verification of the attack, the Rakhine Buddhists burned the villages of the Rohingyas. More than 100,000 Rohingya became refugees by the end of 2012—and were soon placed in Myanmar’s concentration camps.

In his book Colors of Violence, Indian psychoanalyst Sudhir Kakar examines the roots of Hindu-Muslim violence in India. He argues that during a conflict, an attack on a female body escalates a conflict and dissolves any possibility of civil discourse. Kakar writes: “Rape makes such interactions impossible and turns Hindu-Muslim animosity into implacable hatred.”

The violence also focuses on Rohingya female bodies. Burmese Buddhist soldiers have raped Rohingya women as a means to exert their dominance. While Buddhist monks like U Wirathu allege that the Rohingya are raping Burmese Buddhist women, there have been steady reports coming from UN-sanctioned shelters of Rohingya women being raped by Burmese Buddhist soldiers. Annette Ekin, reporting from a Bangladeshi shelter for the Rohingya, details 20 year-old Ayesha Begun’s recounting of soldiers killing the men, tearing a baby away from a mother, and gang-raping Ayesha and the other women. The New York Times reporter Jeffrey Gettleman narrates an equally brutal example with a young Rohingya woman called Rajuma.

It would be easy to discount the atrocities taking place in Myanmar as an aberration. Unfortunately, the country’s history offers a very different assessment. Sadly, this is not a new issue. It is but a new chapter of Buddhist-inspired violence, racism, and sexist rhetoric. The actions do not reflect a new development in Buddhism, or a unique strain within Burmese Buddhism.

Whether it is Japanese Zen Buddhist masters, Tibetan lamas, or Sri Lanka monks, history provides examples of Buddhist religious authorities engaging in violence, and supporting wars and conflicts. In addition they have a tradition of methods in which Buddhists support gender discrimination and military forms of governance.

I cannot emphasize enough that these dark elements do not reflect general Buddhist sentiments on a global level. More than 1 billion people practice some form of Buddhism. The vast majority of them actively support peace and contemplative behavior. But that generality does not mean that Buddhists are immune to racist tendencies, acts of rape, and other forms of violence. Instead, atrocities such as those in Myanmar serve as a grim reminder that humankind is vulnerable to vices, regardless of religion or nationality.