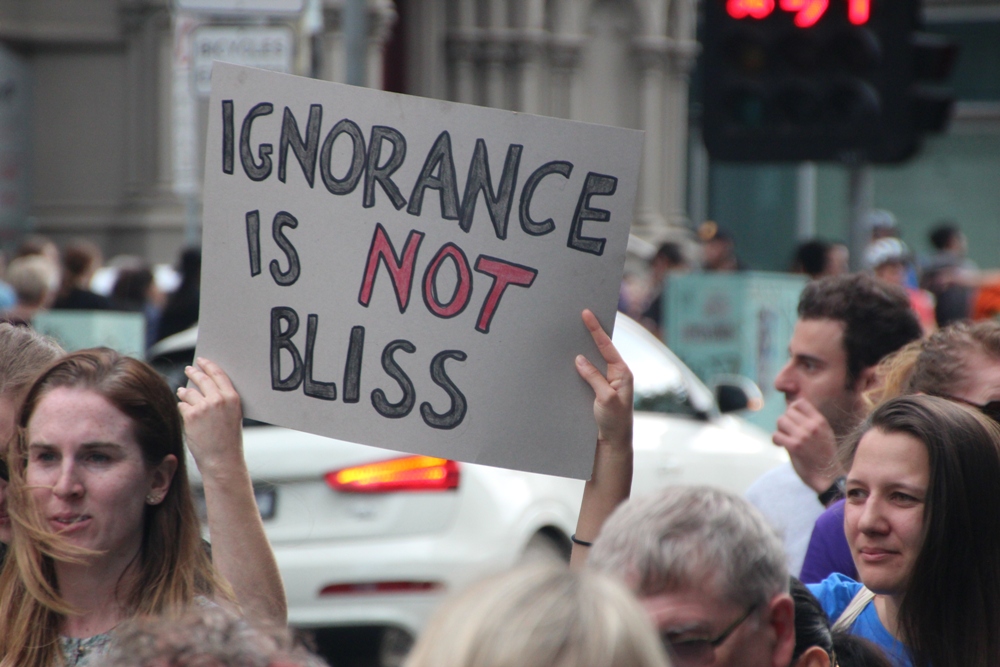 Public ignorance is an inherent threat to democracy. It breeds superstition, prejudice, and error; and it prevents both a clear-eyed understanding of the world and the formulation of wise policies to adapt to that world.

Plato believed it was more than a threat: He thought it characterized democracies, and would lead them inevitably into anarchy and ultimately tyranny. But the liberal democracies of the modern era, grudgingly extending suffrage, have extended public education in parallel, in the hope of cultivating an informed citizenry. Yet today, given the persistence and severity of public ignorance, the ideal of an enlightened electorate seems a fading wish at best, a cruel folly at worst.

Unfortunately, our current civic problem cuts even deeper: We are witnessing the rise of a culture of ignorance. It is particularly insidious because it hijacks certain democratic values. To begin to understand this culture and its effects, it is helpful to identify the ways it differs from simple ignorance.

Perhaps the most noticeable aspect of a culture of ignorance is the extent of willful ignorance. Ignorance that is willful may involve resistance to learning, denial of relevant facts, the ignoring of relevant evidence, and suppression of information. Such ignorance is usually maintained in order to protect a prior belief or value—a sense of self, an ideology, a religious doctrine, or some other cherished cognitive commitment. False knowledge often bolsters one’s will in maintaining a closed mind; but of course, it is only ignorance in elaborate disguise.

When the willfully ignorant are cornered by mounting evidence, they assert their individual right to believe whatever they choose to believe. This is a hollow and silly claim. Beliefs are factive; they aspire to truth. Moreover, beliefs affect attitudes, decisions, and actions. As the Victorian mathematical philosopher William K. Clifford remarked, “No one man’s belief is in any case a private matter which concerns him alone.” He proposed “an ethic of belief” and championed our responsibility to respect evidence for and against our beliefs. Though his standard of evidence may have been too stringent, we can agree that claiming the right to believe “whatever” exploits the democratic respect for individual rights by foregoing individual responsibilities.

A related characteristic is the rejection of expertise. Liberal democratic theory and practice have always elevated individual autonomy and independence, rejecting authority and dependency. They therefore have had difficulties with any relationship that yields individual autonomy—which seems to be involved in consulting an expert. It is true that the place of expertise in a democracy remains contested: We may yield to the expertise of the physician, pilot, or engineer (albeit uneasily); but we may be skeptical of the expertise of the economist, climate scientist, or critic. 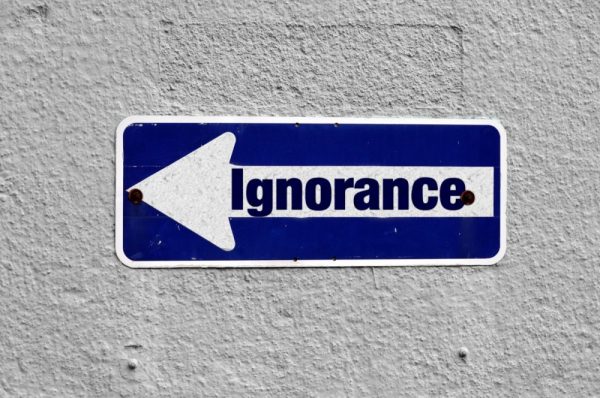 Are we heading toward a culture of ignorance? Photo courtesy of pxhere.

Our ambivalence regarding expertise has increasingly come to be a rejection. The rise of social media has certainly contributed to this trend. Who needs a qualified film or restaurant critic when one can find websites that provide thousands of audience or diner ratings? But the implications go far beyond aesthetics: As a senior minister famously said during the recent Brexit campaign, “Britain has had enough of experts.” Among at least a significant portion of the population, this attitude has led to a rejection of the traditional sources and certifiers of knowledge—universities, science, established journalism. As this attitude engulfs public life, it undermines the fragile but vital distinction between knowledge and belief, between informed judgment and unreflective opinion.

This epistemic populism seems radically democratic, but that image is an illusion. Democracy is, as John Dewey described, a moral climate in which each person may contribute to the construction of knowledge; but it doesn’t imply that each person possesses the truth. Moreover, one need not yield political authority to experts; it is epistemic authority—the authority of knowledge, skill, experience, and judgment—that is carried by experts.

At some point, the “wisdom of crowds” becomes the celebration of ignorance. Conspiracy theories, wild speculations and accusations, nutty claims, “alternate facts,” and pronouncements that are far afield from one’s knowledge—all these claim time or space on a par with accurate and important information. The politician who is ignorant of politics, the law, and history is seen as the person who will “get things done.” Some public figures wear their ignorance as a badge of honor. Let’s be clear: Ignorance is not stupidity, though I admit it is sometimes difficult to tell them apart in practice. And stupidity is likely to produce ignorance across a broad front. But one can be ignorant without being stupid.

Underlying all of these factors is the loss of respect for the truth. No doubt, many things have contributed: the venality of some experts, the public disagreement among experts, the continual revising of expert advice, and the often-unwarranted movement by social scientists from the descriptive to the normative, from facts to pronouncements. Religious fundamentalism, which stretches credibility, is another precipitating factor. The postmodernist deconstruction of ideals like truth, rationality, and objectivity, also contributed to this loss—though I doubt that postmodernist treatises were widely read among conspiracy theorists, religious fundamentalists, or climate change deniers.

At some point, the “wisdom of crowds” becomes the celebration of ignorance.

The irony is that these folks believe they are holding the truth. Indeed, I am not suggesting that we need to claim we possess the Truth, firmly and finally; in fact, I believe those who make that claim actually disrespect the truth. Rather, we need to keep the ideal of truth to guide our inquiries, to aspire to greater truth. Not all opinions or interpretations are equally worthy. The concept of truth is required to separate knowledge from opinion; those who give up on truth, those for whom truth doesn’t matter, are—as the contemporary philosopher Harry Frankfurt said—left with bullshit.

There are signs of hope. Many young people have a naturally skeptical, even cynical, attitude regarding information sources. There is a surge of interest in investigative journalism in various forms. The teaching of critical thinking has broadened to include information literacy: Many colleges now provide ways to learn the skills of evaluating informational sources and content, including statistical integrity. Scholars are giving new attention to epistemic virtues, capacities and traits that enhance the acquisition of knowledge. There is excited talk among feminist and educational philosophers of “an epistemology and pedagogy of resistance” that confronts willful ignorance and the “epistemic injustice” of systematically discrediting certain voices.

The danger, and by the same token, the hope lies in this truth: In the end, ignorance will lead to error. Serious mistakes and their consequences may be required before there is momentum sufficient to roll back this culture.