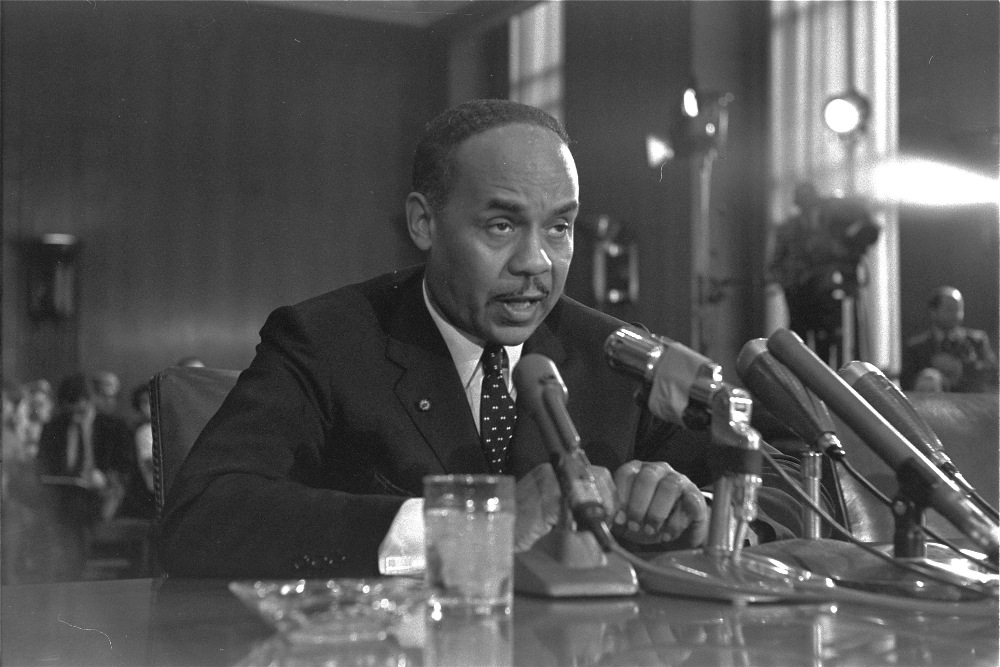 Ralph Ellison, the Oklahoma-born author of the 1952 classic Invisible Man, as a witness at a U.S. Senate Subcommittee hearing in Washington, D.C. on race and the problems confronting U.S. cities. Photo courtesy of Associated Press.

Struggling in William Faulkner’s Absalom, Absalom! to field these questions, flung at him by his Harvard roommate on a snowy evening in 1910, the young Mississippian Quentin Compson plunges into the history of his own Southern community. Drawing on the accounts of his family and fellow citizens of the small town of Jefferson, supplemented by his own experiences and tortured imaginings, he pieces together the fictional but vividly real and tragic story of Thomas Sutpen, a man whose single-minded pursuit of social acceptance and status leads to ruin for him and his family.

Rife with themes of racial and sexual exploitation, incest, miscegenation, brutality, and greed, Absalom, Absalom! seemed to tell a great deal—surely enough to shock some readers and confirm the suspicions of others—about the South. But it wasn’t the first, or the last, literary attempt to address the kinds of questions about the region that Faulkner posed so pointedly through Shreve. During the decades spanning the end of World War I and the birth of the Civil Rights movement, many Americans sought explanations for the region’s racial horrors, entrenched ignorance, depravity, and poverty.

Responding to this barrage of queries became a veritable raison d’être for many contributors to the great literary outpouring some have called the “Southern Renaissance.” Yet despite their focus on the South, and no less than their Northern peers, these writers gained national and international significance and acclaim through their deep engagement with broader themes of human ambition, greed, materialism, and alienation. In this, their work transcended geographic and temporal boundaries.

No novel better embodies or more brilliantly explores these universal themes than Faulkner’s 1936 classic. Its setting, plot, and historical context are specifically Southern, but its central concern, the destructiveness of the obsession with the American dream of wealth and social elevation, runs through other contemporary novels set elsewhere, including F. Scott Fitzgerald’s The Great Gatsby.

In Faulkner’s convoluted and chilling story, Thomas Sutpen’s single-minded fixation on social rank brings him to Jefferson, Mississippi, in 1833. Stunned as a young poor white when a slave turns him away from the front door of a huge Tidewater Virginia plantation house, Sutpen is soon enslaved himself, by an all-consuming obsession with owning such a mansion of his own and claiming all the aristocratic social prerogatives that come with it.

“I had a design,” he explains. “To accomplish it I should require money, a house, a plantation, slaves, a family—incidentally of course, a wife. I set out to acquire these, asking no favor of any man.” Sutpen accomplishes it all, with ruthless efficiency. Arriving in Jefferson with a gang of slaves in tow, he purchases a huge parcel of land, erects a grand manor house, and marries a respectable merchant’s daughter who gives birth to a son, Henry, and a daughter, Judith. 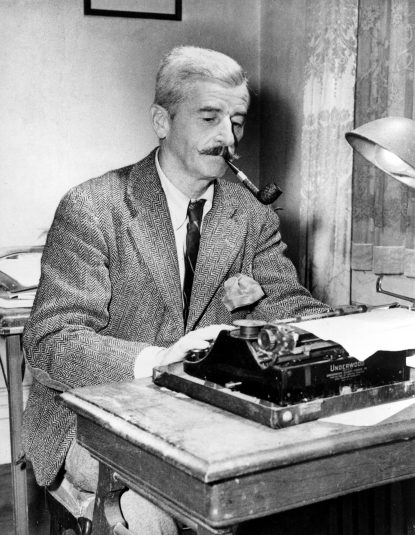 William Faulkner works at his Underwood typewriter in his study at his Rowan Oaks home near Oxford, Mississippi. Photo courtesy of Associated Press.

But Sutpen has already set the stage for the unravelling of his design. Before coming to Mississippi, he had gone to the West Indies to obtain the money and slaves his plan required. While there, he also had married the daughter of a wealthy planter, who bore him a son. Upon discovering his wife’s mixed racial lineage, however, he abandoned her and the boy as incompatible with his ultimate objective.

Years later, his light-skinned biracial son, Charles Bon, arrives in Jefferson, befriends Henry and becomes engaged to Judith. Sutpen’s cold-blooded manipulation of these developments leads Henry to murder Bon. Like King David’s son Absalom, who also killed his half-brother and fled, Henry then takes flight, depriving his father of the male heir he will need to secure whatever may be salvaged of his “design” after the Civil War.

Tellingly, with the bulk of his plan seemingly in shambles, instead of questioning the design itself, Sutpen can only torment himself about the “mistake” he must somehow have made in implementing it. Desperate to learn “what did I do or misdo in it,” he is blind to the possibility that the inherent moral bankruptcy of his plan might have led to its undoing. Indeed, refusing to give up on his original strategy, Sutpen meets his demise in 1869 at the hands of a poor white man whose granddaughter he has impregnated in his crazed pursuit of another son—and then callously tossed aside when the child proves to be female.

Forty years later, his two surviving offspring—Henry, who has secretly returned home to die, and Clytie, a formerly enslaved mulatto daughter—perish when Clytie, fearful that Henry is about to be captured, sets the family’s great house ablaze. Thus are the final human and physical vestiges of Thomas Sutpen’s grand design reduced to ashes, meeting the same fate as the slave South or any edifice, as Faulkner put it, “erected on the shifting sands of opportunism and moral brigandage.”

Its striking response to many of the nagging questions about the South should not obscure Absalom, Absalom!’s critical implications for America as a whole. Sutpen’s absolute certainty of the success of a rational, properly executed plan surely smacked of the nation’s modern can-do mindset. Faulkner’s message about the consequences of human obsession with wealth and social rank was, as he said, also too universal “without regard to race or time or condition” to be applicable solely to the South. In his amoral reduction of respectability to a mere matter of accumulating material wealth and taking on elite airs, Sutpen was little different, one critic noted, from a “ruthless robber baron of the Gilded Age building a fake Renaissance palace on the banks of the Hudson”—or, he might have said, from Jay Gatsby flaunting his Jazz Age party palace on Long Island Sound.

Faulkner’s message about the consequences of human obsession with wealth and social rank was, as he said, also too universal “without regard to race or time or condition” to be applicable solely to the South.

Meanwhile, Faulkner’s black literary contemporaries also wrestled with broader concerns as they explored the nature of Southern black life for a curious national readership. Writers like Zora Neale Hurston and Sterling Brown drew the ire of the Northern “New Negro” advocates of the 1920s, who criticized them for casting Southern blacks as simple “pseudo-primitives whom the reading public still love to laugh with, weep over, and envy.” Instead, New Negro critics urged Southern black writers to serve up a steady diet of black role models who made material and professional strides despite white racial oppression. According to this rigidly bourgeois value scale, Brown quipped, a book about “a Negro and a Rolls-Royce” would always be superior to “one about a Negro and a Ford.” As Ralph Ellison would put it later, if these Northern critics had their way, “one would simply portray Negro experience and Negro personality as the exact opposite of any stereotype set up by prejudiced whites.”

Realizing that simply replacing one caricature with another would do nothing to counter the denial of individuality inherent in all stereotypes—racial, regional, or otherwise—Ellison resolved to address the devastating consequences of this denial in his 1952 novel, Invisible Man. Ellison was born in Oklahoma City and educated at Tuskegee Institute, and the story’s unnamed narrator and protagonist is an eager young black man who has imbibed deeply of Tuskegee founder Booker T. Washington’s doctrine of racial pragmatism and self-help. He persists in his “belief in the rightness of things,” even after he attends a white men’s club gathering, where he has been invited to deliver his high-school valedictory speech and receive a scholarship.

Expecting to be treated with respect, he is forced instead to entertain the tipsy white onlookers, boxing with other black boys and then scrambling for coins on an electrified carpet. He is finally allowed to give his speech, which parrots the accommodationist rhetoric of Washington, but he still angers his white audience by accidentally substituting “social equality” for “social responsibility.” The young man salvages the occasion (and his scholarship) only by explaining apologetically that he had been distracted by having to swallow the blood from a cut suffered during the boxing match.

He moves on to a Tuskegee-esque college, still accepting, as Ellison puts it, “the definition of himself handed down by the white South and the paternalism of northern philanthropy.” When he is expelled for taking one of the school’s Northern white benefactors out into the countryside, where the donor’s illusions about the progress of the black race are traumatically shattered, the young man heads to New York City. There, he tries to conceal his Southernness so as not to stand out, only to face demands to suppress his individual identity and worth as a black man for the greater good of his race—demands leveled, not by straitlaced New Negro advocates, but by the radical quasi-communist and Black Nationalist groups he encounters.

Caught between the two hostile contingents in the wake of a race riot in Harlem, he takes refuge underground, resigned to being an “invisible man” whose personal identity no longer matters. In time, though, he realizes that he is complicit in his own fate, because he denied his regional heritage and sacrificed his black individuality in an effort to be what others said he should be.

With the Supreme Court already mulling the constitutionality of segregated schools in 1952, many readers focused on the book’s racial implications for the South, although Invisible Man also spoke to the several million black Southerners who had landed in Northern cities since World War I. More broadly, irrespective of race, when Ellison’s narrator observes, at the novel’s conclusion, “Who knows but that, on the lower frequencies, I speak for you,” he might just as well be addressing alienated whites beset by modern America’s pervasive homogenizing and anonymizing pressures at every turn.

There was no shortage of Southern writers, black or white, who accepted Shreve McCannon’s challenge to Quentin Compson. Yet the ones whose work has proven most enduring were those who managed in the course of telling about the South to illuminate critical core truths not only about America but about what Faulkner called the “universal mutual experience, the anguishes and troubles and griefs of the human heart.”