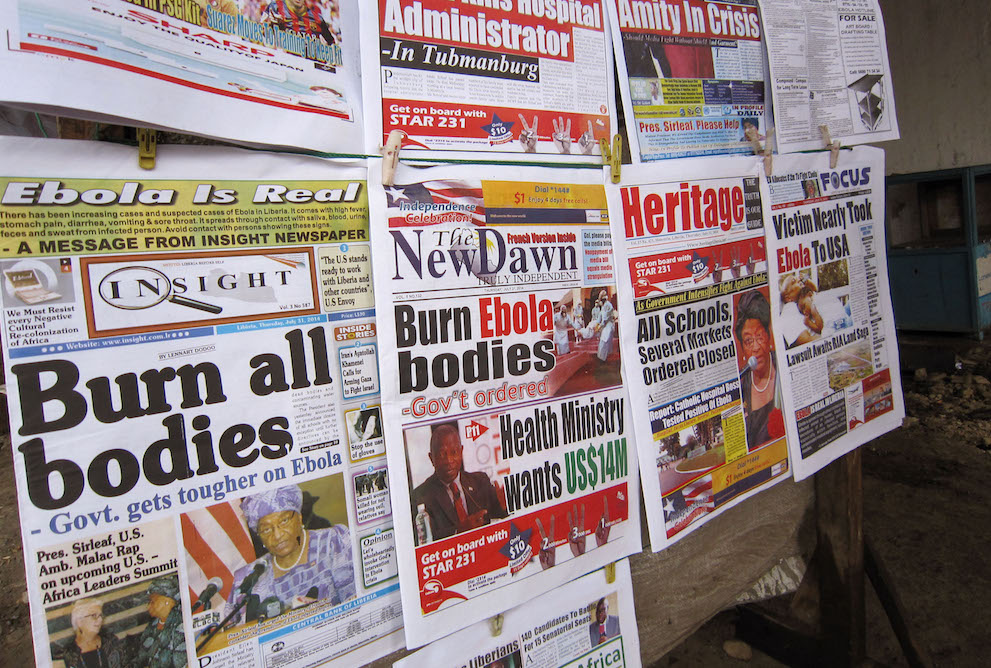 Most of us think we know what a sexually transmitted disease is: syphilis, gonorrhea, HIV, or herpes—all diseases that are spread mainly through sexual contact. But in November 2017, CDC researchers published the results of a search of the medical literature that showed that at least 27 different viruses can be found in semen, including Zika, which is primarily spread by mosquito bites.

It’s not known how many of these viruses are sexually transmittable, but it is already clear that Zika and Ebola are. Marburg (which is similar to Ebola), Lassa fever, and mumps may be, too. Scientifically, we’re now in a place where we can’t conclusively say what is sexually transmissible and what is not.

For health writers who spend a lot of time “in the field,” like me and my colleague, Liberian radio journalist Alpha Senkpeni, this has raised all sorts of questions about how to communicate the risks of getting sick. We often write about Ebola for readers in Africa, and we need to get our story straight, because the stakes are high. The largest Ebola outbreak in history, between 2013 and 2016, resulted in more than 11,000 deaths in West Africa.

Ebola, of course, is deadly, but recently things have become more complicated. During the latest outbreak, for the first time, a large number of victims actually survived. The blanket message that “Ebola kills” was not true for about half of the people who contracted the virus. They are now survivors who have gone on with their lives.

As health reporters, we have a responsibility to write about these new findings and circumstances in a way that helps our readers. If risks are not properly translated, lay audiences might panic or tune out, or they might get information that hurts them. What’s more, the science about viral fractions in semen is so complicated that just about anyone who is not a virologist is a lay reader.

So what did the news mean for people here?

In several studies published over the course of 2015 and 2016, scientists started piecing together what sexually transmitted Ebola meant for public health. The first clear case, that of a 44-year-old Liberian woman who died in 2015 after contracting the virus from a male partner who had survived Ebola infection nearly six months earlier, was documented in the New England Journal of Medicine.

Contracting Ebola from sex was still believed to be rare. But one of the authors of the case study, Michael Wiley, a researcher at the Center for Genome Sciences at the U.S. Army Medical Research Institute of Infectious Diseases in Fort Detrick, Maryland, cautioned in an interview with Nature magazine that it was worth bearing in mind that it had only taken a single infection to start the previous epidemic in West Africa. Even if sexual transmission is unlikely, its consequences could be devastating. 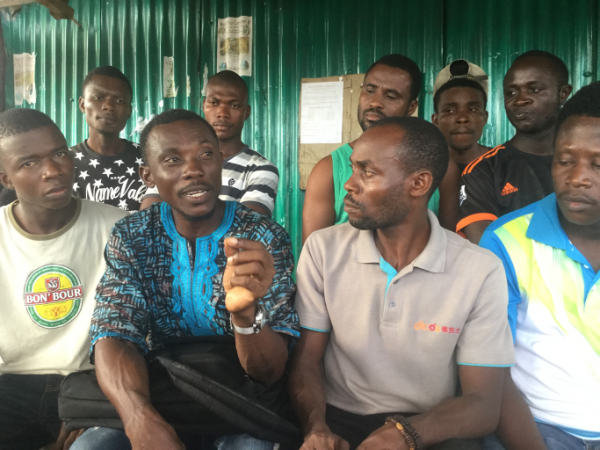 Meanwhile, other scientists were altering our understanding of how long Ebola virus remains in semen. We had believed that it could last up to 90 days, and then 180 days—but as time went on, findings from the Liberia Men’s Health Screening Program made it clear that vestiges of the virus remained in semen even longer than that. The risk of spreading the disease might linger long after patients had recovered from the infection.

To further complicate these potentially alarming results, laboratory infrastructure in West Africa is not sophisticated enough to facilitate the isolation of a complete virus. When Alpha and I talked with Dr. Mary Choi of the CDC’s Emerging Infectious Disease Surveillance Unit in October 2016 in Monrovia, Liberia’s capital, she told us that researchers might get greater clarity on the likelihood of the sexual transmission of Ebola if it were logistically possible to take the viral fragments in semen and regrow a complete virus in the lab. But as things stood, considering the limits of local labs, the science was not completely clear.

We knew we had a classic science journalist’s dilemma: How to communicate uncertainty and risk without making an overstatement that itself would be harmful?

When we spoke with Parker Williams, of the Ebola Response Team of the International Committee of the Red Cross, his first concern was for survivors. “I would be concerned that stigma against survivors may be an issue if this [sexual transmission] is broadcast,” he said.

Williams said he was worried that Ebola survivors, already often treated as pariahs, with suspicion, would be further isolated if people publicized what is probably a very small risk of sexual transmission. But he also saw the dilemma we faced, sighing, “But then, we cannot afford even one case!”

How should journalists handle this story? we asked him.

“The only answer I have is, delicately.”

In late 2016, we set off to interview people in Monrovia, setting up three focus groups to see what they knew about Ebola’s dangers, and what information they wanted. Some found it hard to discuss Ebola in an open forum, but we found that the longer we engaged people in conversation, the more animated they became—as if the memories of dread from Ebola days came flooding back. “Up to now people are still talking that Ebola is dangerous and can transfer from place to place, and the thing we can do to prevent ourselves is to put God first,” said Solomon Jalloh, of West Point, a township in Monrovia.

The majority of people said that the Ebola outbreak was one of the most significant things that had ever happened in Liberia. One man encouraged the media to continue telling it like it is. Jasper Francis, of Du Port Road, said: “I saw the facts and the reality, travelling everywhere, every community, and I saw the ambulance travelling in various communities, in various districts, taking away the symptoms [sick people, with symptoms] from among the people who were not affected because this disease is a disease that transmit from one person to another.”

We tried to gauge knowledge of sexual transmission. It was clear that some of the numbers that had been in the news had stuck in people’s memory. There was both concern and incredulity about the possibility of sexual transmission. “I don’t believe that a survivor can re-infect another person after 180 days of his post-Ebola life,” said one man—but others, both men and women, said they thought often about the possibility of transmission.

Two people we encountered said that it was far-fetched to talk about sexual transmission, because they did not believe Ebola was real. “Up to now, I believe the virus was not real. It was a man-made virus. It was something that the governments agreed to: the Guinea President, the Sierra Leone President, and the Liberia President in 2012. This meeting was held in Liberia and about U.S. $4 million was given for this experiment,” said Clearance Kennedy of the Cow Field Community, Du Port Road.

This spoke to another concern of many people we interviewed, who argued that coverage of this health issue needs to be accurate to help combat rumors. “In Liberia, rumors are strong, and so to defeat rumor you must also provide the truth,” otherwise, the speculation will continue to grow on a daily basis, cautioned Nathaniel Brown, who is co-chairman of the Friends of Friends Hahtai Association Intellectual Forum in Monrovia. Intellectual discussion and debate are very popular pastimes in Liberia, and forums like Friends of Friends meet regularly in tea houses to discuss pressing issues. Brown and others in the forum wondered if there was a way to know if the sex life of people who survived Ebola is safe or not.

The forum members Brown and other forum members were asking for an end to speculation, but while advocating for accuracy seems easy on paper, in real life it’s more complicated. Ebola survivors in research programs received safe sex education, aimed at ensuring they did not transmit the virus to their partners, but population-wide safe sex messaging that focused attention on Ebola survivors did not seem appropriate, because the risk was low and too much talk about it could lead to stigmatizing. Yet for the general population in Liberia, vagueness or a lack of information could make the risk sound bigger than it is. What we had was a communications stalemate.

And this is where the CDC’s latest research offered some guidance. Now that we know that many kinds of viruses are present in semen, our job as journalists has become easier. We can tell a story about sexual risk in a way that allows the focus to shift away from Ebola survivors, while reducing the likelihood of either blame or harm. The story now is about the mystery of these viruses and the need for ongoing research. And of course, it also remains a safe sex story. The simplest message is that everyone should be aware of the risk of viral infection from sex.