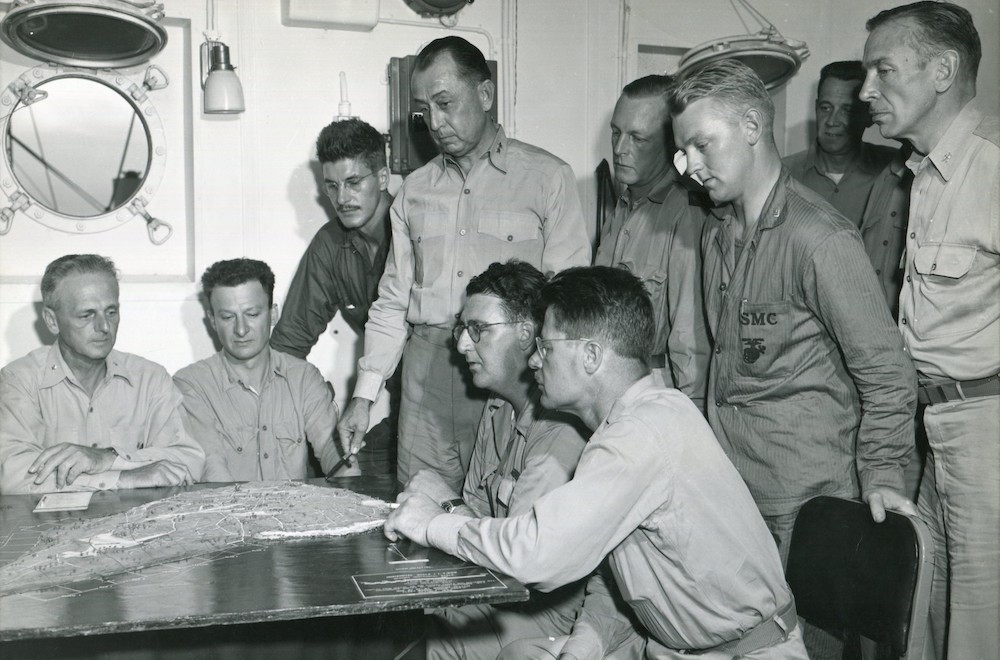 Betio, part of the Tarawa Atoll, is a small, bird-shaped island along the equator in the central Pacific. Early in the morning on November 20, 1943, elements of the Second Marine Division boarded tracked landing vehicles (“amtracs”) and headed for Betio’s beaches. As part of an operation codenamed Galvanic, the Marines hoped to clear the heavily defended island of Japanese forces under the command of Rear Admiral Keiji Shibasaki and capture its vital airfield. The Japanese commander had boasted to his approximately 4,800 troops that “a million men couldn’t take Tarawa in 100 years.”

It took the Marines just 76 hours to capture the two-mile-long island. But they paid a terrible price. The vaunted Japanese Special Naval Landing Forces who helped to defend Betio were sheltered in fortified pillboxes and bunkers around the island. They prepared heavy anti-boat guns, howitzers, mortars, heavy machine guns, and rifles to deliver murderous fire on the advancing Americans. “The bullets were pouring at us like a sheet of rain,” one Marine private remembered of the initial landing. For a time, it seemed as though the Marines would be thrown back into the sea.

Correspondent Robert Sherrod, a 34-year-old Georgia native who covered the operation for Time magazine, said that it was the “only battle which I ever thought we were going to lose.”

Sherrod returned to Honolulu eight days after the initial landings on Beito. Some American media were expressing shock at the battle’s cost, with one example a December 4, 1943, front-page headline in The New York Times that read: “Grim Tarawa Defense a Surprise, Eyewitness of Battle Reveals; Marines Went in Chuckling to Find Swift Death Instead of Easy Conquest.” A distraught mother of a Marine killed on Beito sent a letter to Admiral Nimitz accusing him of “murdering my son,” and some lawmakers in Washington, D.C., threatened to start congressional investigations about the battle.

Sherrod, whose total mileage covering the Pacific war had reached 115,000 after Tarawa, had been amazed at the home-front attitude about what he called “the finest victory U.S. troops had won in this war.” Although the operation had not been perfectly planned or executed, as was the case in any military operation, by all the rules concerning amphibious warfare, the Marines should have suffered far more casualties than the Japanese. “Yet, for every Marine who was killed more than four Japs died—four of the best troops the Emperor had,” he said. “Looking at the defenses of Beito, it was no wonder our colonels could say: ‘With two battalions of Marines I could have held this island until hell froze over.’”

Sherrod was intensely aware of a major problem of World War II: the inadequate job done by America’s press in explaining war’s hard facts, which led Americans to expect an “easy war.” So Sherrod did the warning. The struggle to defeat the Japanese might well take years, he said, and American fighting men would suffer heavy losses “time and time again before we achieve the final victory.”

In his book, Tarawa: The Story of a Battle, released in 1943 and a bestseller, Sherrod recalled a conversation with a bomber pilot after returning from the Pacific who had told his mother what the war was really like and how long it would take to finish the job. The woman sat down and cried after hearing her son’s report. Sherrod also wanted to impress on the American public the cruel and inescapable facts that no amount of bombing and shelling could prevent the necessity of sending in foot soldiers to finish a job. “The corollary was this: there is no easy way to win the war; there is no panacea which will prevent men from getting killed,” Sherrod said, adding that to deprecate the Tarawa victory would “defame the memory of the gallant men who lost their lives achieving it.”

Although the reaction to publishing Strock’s image had been mixed, with some accusing Life of “morbid sensationalism,” Sherrod believed the time had come for the public to know what combat was really like.

On December 28, 1943, Sherrod attended a press conference in Washington, D.C., where Roosevelt talked about the demise of Doctor New Deal for a new physician—Doctor Win-the-War, “to take care of this fellow [the country] who had been in this bad accident. And the result is that the patient is back on his feet. He has given up his crutches. He isn’t wholly well yet, and he won’t be until he wins the war.”

At a luncheon at the Mayflower Hotel before the president’s press conference, Roosevelt’s press secretary, Steve Early, had suggested to Sherrod, who had met Roosevelt after the correspondent’s return from Australia in August 1942, that he see the president after he finished talking to the press.

After some pleasantries in the Oval Office, President Roosevelt turned to a subject Sherrod knew much about—Tarawa. In addition to coverage from civilian reporters and photographers, the action on Beito had been recorded on film by combat cameramen from the Second Marine Division, including Norman T. Hatch. On the island, Hatch and his assistant, Bill “Kelly” Kelleher, laden with 200 pounds of equipment, captured gripping footage of the action with an Eyemo 35-mm camera. They also made history during an assault against a massive enemy bunker when they were the first and only cameramen during the Pacific War to film Japanese troops and Marines together in combat. The film that Hatch and others shot was developed at Pearl Harbor and flown to Washington, D.C., where it was eventually incorporated into a 19-minute-long documentary to be produced by Warner Brothers and distributed by Universal Pictures.

President Roosevelt had been inclined to release the film and images showing the grim results of the battle on Tarawa, but wanted Sherrod’s opinion, as they were “pretty gory—they show a lot of dead,” said Roosevelt. Just a few months before, in September 1943, the U.S. Office of Censorship had allowed Life magazine to give the public its first view of dead American soldiers—a shot by George Strock of three nameless infantrymen lying dead, half-buried in the sand with their faces unseen, on the beach at Buna after a Japanese ambush.

Although the reaction to publishing Strock’s image had been mixed, with some accusing Life of “morbid sensationalism,” Sherrod believed the time had come for the public to know what combat was really like. He agreed with the president that the images were gruesome, but noted, “that’s the way the war is out there, and I think the people are going to have to get used to that idea.”

Roosevelt agreed, and approved releasing the Tarawa images and film on March 2, 1944. Hatch’s footage was an essential part of the Oscar–winning documentary With the Marines at Tarawa. The New York Times praised the film, noting that its footage had “all the immediacy of personal participation in the fight, and its sense of actual combat in close quarters is overwhelmingly real.” The sale of war bonds rose after the film’s release.

As for Sherrod, he returned to the Central Pacific to report on the suffering and bravery of American fighting men on Saipan, Iwo Jima, and Okinawa. In his writing he kept one thought in the back of his mind: to tell “wishful-thinking Americans that war is not always the romantic, smashing adventure the afternoon newspaper headlines make it; nor is it a duel that is won by swarms of high-flying airplanes. War is a cruel, desperate necessity which calls for courage and suffering. It is too bad, but it is true.”

Although he never was quite able to bridge the immense gulf of understanding between the home front and the battlefront, Sherrod kept on trying, continuing to report on the Marines as they battled the Japanese on Saipan, Iwo Jima, and Okinawa, the last great battle of the war in the Pacific. A war correspondent, he believed, could not write with the perspective that time furnished—that was best left to “the historians and their mountains of official records.” What Sherrod attempted to do was to write about what he saw, heard, and felt, reflecting, as best he could, “the mood of men in battle, as those men appear and talk and fight.” He did so as well as any reporter of his time.