In 2018, Islamic clothing is officially cool. CoverGirl has a hijabi ambassador. H&M sells a popular modest clothing line. Even Barbie wears a headscarf on a doll modeled after the American fencer Ibtihaj Muhammad.

Despite this cool factor, Islamic women’s headscarves and clothing retain strong associations with piety and politics, symbolism that is wielded both by the woman in the clothes and the people around her. In countries where Muslims are minorities, as in the United States, merely wearing hijab is seen as a political act, albeit one that can be interpreted in many ways. Shepard Fairey created an image of a woman wearing a flag hijab as a sign of tolerance and inclusivity, while others claim that the scarf is a sign of Muslim women’s repression.

In Muslim-majority countries, however, the symbolism—and the way that women and the state both use hijab to express ideas—is deeper and more interesting. Rather than arguing about whether or not Muslim women should dress modestly, I study how Muslim women dress: what they are wearing and why, and how they use fashion to exert political influence.

Muslim-majority countries have a history of regulating women’s clothing through official dress codes, whether banning headscarves or requiring them. In Iran, for instance, Muslim women’s dress was a political matter long before it became the symbol of revolution in 1979. The shah banned the full-body covering called chador in 1936 as part of his attempt to undermine the authority of the Shia clerics and westernize Iranian women.

Now, of course, Islamic clothing is required for women in Iran by law. Drafted under Ayatollah Ruhollah Khomeini’s leadership as part of his vision for a public space governed by the principles of Islamic morality, these laws include harsh punishments for inadequate hijab—jail time, fines, even 74 lashes with a whip. Harassment and arrests for violations became commonplace after the revolution.

Despite conditions of discrimination—because requiring a headscarf and modest clothing is discriminatory—pious fashion comes in a remarkable range of styles in Tehran. One option is to wear the floor-length chador draped over the hair and shoulders. The alternative to chador is a coat-like manteaux with some sort of head covering. There are two popular head coverings to pair with a manteaux. One is a sort of balaclava, called a maghneh. But the fashionable women of Tehran wear a rusari—a scarf covering the head and knotted under the chin or wrapped around the neck, personalized by fabric, color, pattern, and style of drape. 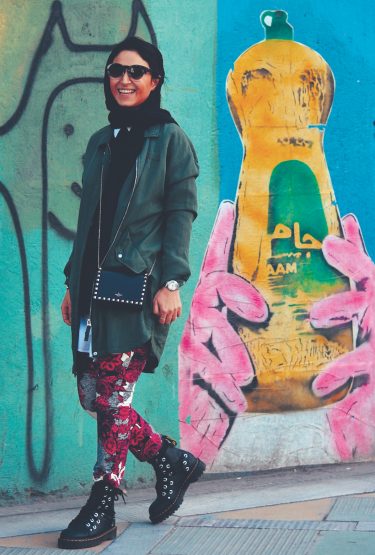 In this urban casual look, the hardware on the Dr. Martens boots echoes the studs on the Valentino crossbody bag. The Topshop floral leggings are the stand-out item, made even cooler by being paired with utilitarian items like a black scarf and a military jacket. The graffiti in the background is of a dish-soap bottle. Photo courtesy of Anita Sepehry/the Tehran Times fashion blog.

Though these items represent the building blocks of modest garb, they do not define its expression. Women define what pious fashion looks like when they get dressed every morning—whether they wear structured separates accessorized with designer sunglasses, flowy pastel chiffons embellished with rhinestones, or ripped jeans tucked into combat boots. On the streets of Tehran, in its cafés and places of business, women find ways to use their clothing to make claims about what counts not only as fashion, but also as piety.

Within a regime that has attempted for decades to promote dress codes as a way to craft particular types of Muslim citizens, and in which direct political resistance is dangerous, clothing has become a form of political engagement that is potentially powerful because it can sometimes slide under the radar as a matter of culture versus statecraft.

What sort of power can modest clothing choices have? For one, dress becomes a way to access governmental office. Women hold numerous advisory roles in government. Chador is a requirement of appointment to these positions. But this limitation also creates an opportunity. Women can take advantage of the symbolic meaning of the chador to mark themselves as supporters of the theocracy, independent of their actual political views.

Then there is a more recent popular style integrating traditional motifs and embroidery that is Kurdish, Turkoman, or Indian. Called lebase mahali, which means “local clothing” in Persian, it does not push the boundaries of modesty. But it does something else: It highlights Persian and Asian aesthetics over Islamic and Arabic ones. This Persian ethnic chic undermines current Islamic authority, sometimes unintentionally, simply because it draws on sources of authority that predate the Islamization of Iran.

This power to critique through sartorial choice comes with substantial risk. Since clothing is so strongly linked to character, a bad outfit can be seen as a reflection of poor character. In Iran, there is even a term for this: bad hijab. Bad hijab can be both an ethical failure (too sexy) and an aesthetic failure (not tasteful). It’s a concern of the authorities because bad hijab disrupts the public Islamic space that Iranian theocracy tries to create.

The infamous morality police have often targeted women for what they deem bad hijab, but they are not the only ones. In fact the first time I noticed it was while shopping with my Iranian friend Homa. “Liz, this is a good example of bad hijab for you,” she said when a young woman walked by. Homa was quite happy to elaborate: “Her ankles are showing, her pants are rolled up, they are made of denim and tight. Her manteaux is short, slit up the side, tight, made of thin material, and exposes the back of her neck and her throat. And her rusari, look at her rusari. It is folded in half so that her hair sticks out in front and back and tied so loosely that we can see all her jewelry. Plus, her makeup is caked on.” 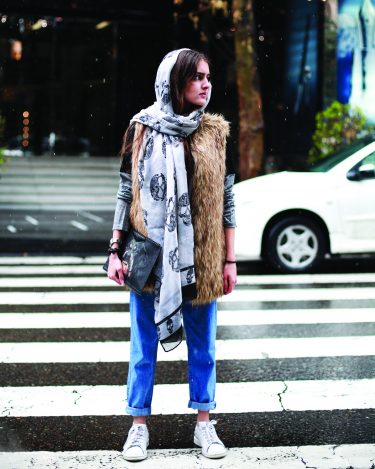 Homa’s determination of bad hijab was based on a number of perceived violations. The first problem was that the woman’s outfit exposed parts of her body legally required to be covered. Homa also disapproved of the woman’s jeans—reflecting a widely held opinion in Iran that denim is improper for women to wear for both aesthetic reasons (as a fabric that is too casual) and political reasons (as a Western fabric that might infect the subject with Western ideas).

Homa spent considerable time describing for me why this woman’s rusari was inadequate. In this case, the violation depended in part on the scarf’s gauzy material, which was translucent. The way the scarf was worn was also a problem: By folding the rusari in half lengthwise, the woman only covered half as much hair as normal. Homa had also judged the woman’s heavy hand with makeup a hijab “failure” because it made her appear more alluring to the opposite sex.

Why so catty? Of course women, even pious ones, can be hard on one other, but there is more to learn from Homa’s reaction. Accusation of bad hijab is an expression of her own concern over sartorial practice. Pious fashion creates aesthetic and moral anxiety. Am I doing it right? Do I look modest? Professional? Stylish? Feminine? Women try to resolve this anxiety by identifying who is doing it wrong. Improper pious fashion is what allows proper pious fashion to redefine itself away from stigma to style: If this mystery woman was wearing bad hijab then surely Homa was a sartorial success.

Homa’s accusation of bad hijab might have helped legitimate her own clothing choices, but it came at a cost. Public shaming of Muslim women’s dress relies on a specific ideology of how women should appear in public, and women themselves are not exempt from promoting this aspect of patriarchy. By policing other women, they accommodate existing ideology to improve their own status.

At the same time, bad hijab is politically potent because it can shift the boundaries of successful pious fashion, sometimes expanding those boundaries, sometimes narrowing them. Homa might have been outraged by what this mystery woman was wearing, but she was violating some of the very same norms: Her own ankles were showing, her hair peeked out from her scarf, she had on foundation, eyeliner, and mascara.

And when everyone is showing her ankles and painting her toes, it sends a very personal signal about how the state’s power to define women’s morality is declining. What are my friends wearing? What are designers producing? What are bloggers posting? These are the sorts of things that influence what Iranian women wear, not only the threat of police surveillance and arrest. Besides, there are not enough police in Tehran on a hot summer day to arrest every young woman wearing capris.

In a surprise public statement last December, Brigadier General Hossein Rahimi, head of Greater Tehran police, admitted as much. He announced that women who are found to be wearing bad hijab will no longer be arrested, but instead sent to morality classes. It is too soon to say if this is a clear sign of a shift in Iranian politics. But if this does signal a positive change, credit goes to women’s sartorial savvy, not the police. And to the public who would undoubtedly react if everyone wearing nail polish was administered the 74 lashes permitted in the penal code.

In recent weeks a few Iranian women have protested the forced dress code directly. They stand on top of utility boxes, take off their headscarves, and wave them on sticks. These protests have resulted in dozens of arrests, proving that in the current political climate bad hijab might be tolerated, but no hijab is going too far. Images of these protests on Twitter include women in full chador waving headscarves in solidarity. This is a good reminder that it is not the wearing of hijab that Iranian women oppose, but rather the government’s attempt to police their bodies. The protesters and the Iranian authorities agree on at least one thing: what women wear matters.