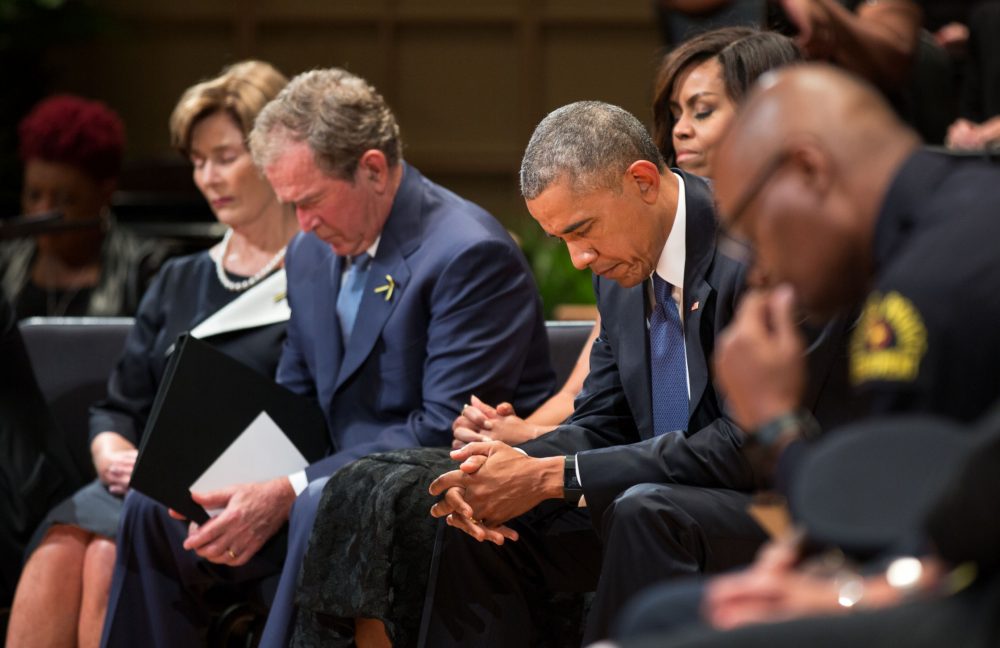 Charles Bennett, a Democratic Congressman from Jacksonville, Florida, was afraid of communism. In July 1955, he spoke of his concerns on the floor of the House of Representatives. “In these days, when imperialistic and materialistic communism seeks to attack and destroy freedom, we should continually look for ways to strengthen the foundations of our freedom,” he told his fellow members of Congress. Bennett’s proposed solution was simple: Americans could add the phrase “In God We Trust” to their dollar bills. By consensus, Congress adopted Bennett’s resolution.

Americans’ ready embrace of the phrase in the 1950s seems foreign to a contemporary politics when so many Americans find invocations of Christianity in American politics frustrating. But seen in another light, the story of “In God We Trust” actually sheds light on the reasons behind that frustration. The phrase seems straightforward and clear, but any interrogation of it shows how quickly its meaning dissolves into ambiguity. The “God” of the phrase is by implication—though not explicitly—the monotheistic deity of the Hebrew and Christian Bibles. But what it means to “trust” is unclear, and “we” is undefined. Does it refer to all Americans? More, the same is true for the word “Christian” itself. What does it mean to be a “Christian candidate”? What does it mean to have a “Christian nation”? During the Cold War, Protestants like Bennett imagined the existence of a religious consensus and coined the phrase “Judeo-Christian” to describe it—but whether that consensus actually exists remains up for debate.

Putting the name of God on American currency was not a new idea in 1955. The words “In God We Trust” had first been placed on coins in 1861 at the direction of Treasury Secretary Salmon P. Chase, at the urging of a Christian minister named M.R. Watkinson. For a week, Chase pondered on Watkinson’s letter, which suggested placing the phrase “GOD. LIBERTY. LAW.” on coins. Then the treasury secretary instructed the director of the Mint to stamp the declaration on the money, but he changed the wording to “In God We Trust,” which Chase—always pompous—thought stylistically superior to Watkinson’s suggestion. The phrase appeared on American coins intermittently from Chase’s time until 1938, when it began appearing on all metal currency.

Bennett’s resolution fixed its appearance on paper currency as well. In the 1950s, with the country feeling under siege, his proposal to revive Chase’s plan received wide support from both political parties and President Dwight Eisenhower. At almost precisely the same time that Bennett’s measure passed, Congress voted to add the phrase “under God” to the Pledge of Allegiance. Senator Homer Ferguson, a Republican from Michigan, explained that he supported that resolution because “Our nation is founded on a fundamental belief in God, and the first and most important reason for the existence of our government is to protect the God-given rights of our citizens.”

Americans’ enthusiasm to publicly declare their faith in God—both in the turbulent 1860s and 1950s—was more than simple piety; these were acts of public theology. American Christians did not merely advocate for public acknowledgement of God; they offered interpretations of what that faith should mean for U.S. democracy. Bennett, Ferguson, and Chase each performed a ritual of national sanctification, trying to bind together in the public eye what they took for granted: that American democracy depended upon the virtues of what they thought of as simply “Christianity,” but which in retrospect seems to be Protestantism.

Chase, Bennett, Ferguson, Eisenhower: all were Protestants, and as Protestants they argued that Christian theology provides a transcendent rationale for the importance of democracy and human freedom. Protestants had been suspicious of authority—whether spiritual (as in church leadership) or worldly (as in kings and queens)—since the Reformation. Only a few years before the American Revolution, for instance, a popular political cartoon depicted a band of restive Boston colonists banishing an Anglican bishop that the British crown had sent to them. The protesters are shown shouting slogans like “No Lords Spiritual or Temporal in New England” and “Liberty & Freedom of Conscience.” Words like “liberty,” “freedom,” and “rights” linked Christianity to individual independence, and fueled what Protestant Westerners in general and Protestant Americans in particular thought of as Christian civilization: a society in which democratic politics and Protestant religion were intertwined into a creed of personal liberty.

Grasping this connection helps explain why some American Protestant activists today insist that the health of the state depends upon whether their form of Christianity is given space in the public sphere to thrive. And yet, that insistence occludes the fact that even within American Protestantism, there have been distinct visions of the form of Protestant faith that democracy depends on.

Dwight Eisenhower, for instance, was famously convinced of the importance of religious belief to American democracy, holding to the same mainline Protestant convictions as Bennett or Ferguson. He was baptized Presbyterian soon after he was inaugurated as president because he believed in the importance of Protestantism to the health of the state. “A democracy cannot exist without a religious base,” he argued, famously stating that, “Our government has no sense unless it is founded in a deeply felt religious faith, and I don’t care what it is”—a seeming ecumenical gesture he quickly qualified by asserting that the United States was based upon the “Judeo-Christian concept.”

For Eisenhower, as for many other Cold War American Protestants, the “Judeo-Christian” tradition was a way to unite Protestants, Catholics, and Jews. It dismissed niceties of theology or particularities of religious ritual in favor of a nebulous sense of solidarity. In practice, however, “Judeo-Christianity,” like the people who used the word, often took for granted Protestant assumptions: suspicion of religious hierarchy, association of religious faith with individual piety and moral practice, an emphasis upon personal feeling rather than corporate participation. All these things were to them compatible with American democracy.

American Christians did not merely advocate for public acknowledgement of God; they offered interpretations of what that faith should mean for U.S. democracy.

But to other American Christians—even American Protestants—the generalities of Eisenhower’s Judeo-Christianity were not sufficient, and the words “In God We Trust” took on very different meaning. The struggle over what it means to be a Christian in America are thus very much up for debate, with some insisting the obligations of the term extend far beyond Eisenhower’s gentle platitudes.

For example, the pastor David Barton runs a large evangelical ministry devoted to demonstrating that the American Founding depended upon Christian ideas. Barton is representative of the politically and theologically conservative subset of Protestants today sometimes called the “Religious Right.” Barton goes much further than Eisenhower, formulating a Christianity of much more detailed theological expectation and far less comfort in the mainline of American culture. Not content to claim that Christians share simply generalized pieties, Barton argues that the American Founders shared his own particular brand of American evangelicalism, marked by the importance of affirming Jesus Christ, by social conservatism, and by small government. For Barton, then, not only were American leaders from the Revolution through Eisenhower influenced by Protestant ideas of liberty; they explicitly intended to found a state shaped by the sort of pious evangelical Christianity that Barton himself embraces.

Surveys have shown that conservative activists like Barton have been somewhat successful in claiming the term “Christian”—many young Americans now associate the term “Christian” with Barton’s conservative social politics. But Barton faces a number of Protestant critics, like historian John Fea, who argue that his form of evangelical patriotism is not simply bad politics, but bad Christianity. For Fea, Barton’s veneration of the American Founders is idolatry; hardly Christianity at all.

Similarly, other Protestants contend that the relationship between their faith and democracy should point American politics in different directions than Barton’s economically libertarian and socially conservative ideology. While Fea offers a theological criticism of Barton’s faith, Jim Wallis maintains that Barton’s politics are distant from what Christianity demands. Wallis, a Methodist pastor and political activist known best for assailing American capitalism and calling for a stronger welfare safety net, argues that Protestant liberty means that the Christian community should use civil authority to promote the economic independence and well-being of all its members. For Barton, Protestant morality requires social conservatism, opposition to abortion and same-sex marriage. For Wallis, Protestant morality means hospitality and welcoming the stranger.

In truth, the relationship between American democracy and American Christianity remains open to debate—and the spectrum from Barton to Eisenhower to Wallis encompasses only white American Protestants.

When he proposed adding “In God We Trust” to American currency, Charles Bennett declared that the sentiments behind the phrase were “indigenous to our country.” He assumed a common heritage and common understanding of what Christianity might mean. But contemporary disputes, like those between Barton and Wallis, illustrate that the argument about that relationship has never been so simple as any particular American, or American Christian, might wish.