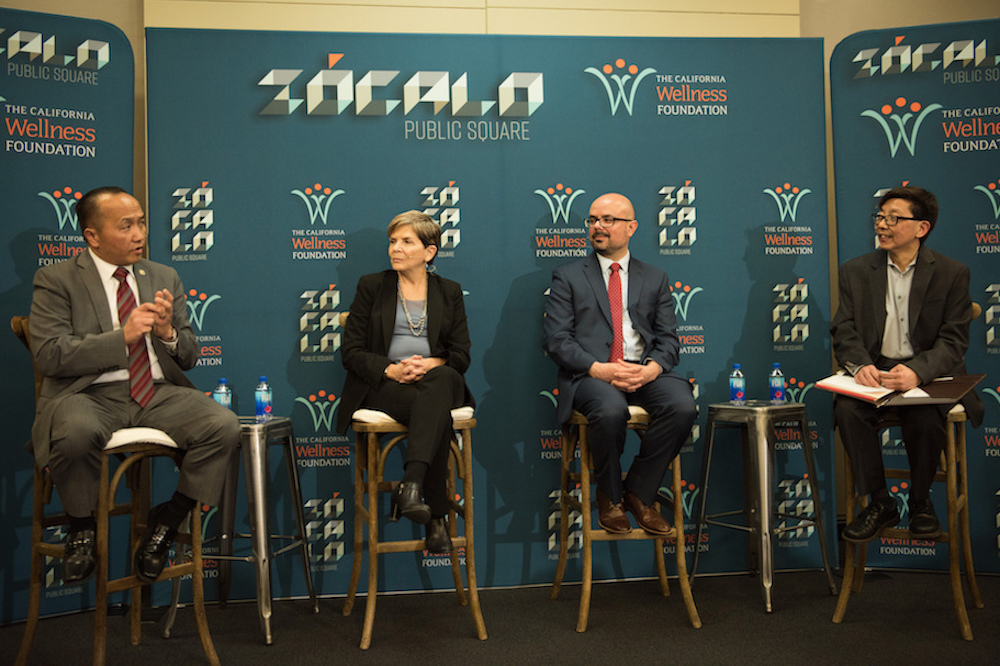 With immigrant rights under siege across the country, California has “a target on its back.”

That’s how María Blanco, executive director of the University of California Immigrant Legal Services Center, summed up her state’s position at a Zócalo/The California Wellness Foundation event titled “What Can California Teach America About Immigrant Integration?”

But even as the Trump administration has slapped a bullseye on California—with dead-of-night neighborhood raids by ICE agents, angry threats of withdrawing federal funds from “sanctuary” communities, and a constant stream of menacing presidential tweets—the Golden State also is being looked to as an example of how states can better protect immigrants and integrate them into society.

In a discussion at the Capitol Event Center in Sacramento, a panel comprised of Blanco, Elk Grove Mayor Steve Ly, and California State Director of Immigrant Integration Daniel Torres examined what lessons, both positive and negative, California might hold for other parts of America that haven’t previously been stirred and shaped by major immigrant tides.

Moderator Foon Rhee, columnist and associate editor of The Sacramento Bee, opened the discussion by observing that, though immigration obviously is a major issue in the United States, much contemporary debate has focused on “who to let in and who to keep out.” That narrow focus has excluded more serious discussions about what sort of programs and policies can help immigrants gain citizenship, assimilate into civic life, and acquire the tools they need to gain an education, get a job, and perhaps eventually become citizens.

Torres—whose job title was created in 2015, and may be the first of its kind in any state—said that having Trump in the White House “certainly added new challenges” for California’s governor and the state’s efforts to integrate immigrants. Among the most conspicuously red-hot of those challenges has been the battle over the fate of DACA recipients (Deferred Action for Childhood Arrivals), the so-called Dreamers. Torres briefly catalogued the legal skirmishes that have ensued as the Trump administration has tossed the issue to a stalemated Congress, while lawsuits and court injunctions have afforded the Dreamers some temporary protection from deportation.

“The real question is how do we find a path forward for DACA recipients to citizenship,” Torres said. Over the last 17 years, and particularly in the last several years, California has been studying programs to help immigrants get access to college, and to stay there through in-state tuition and affordable private loans, Torres said. The state has made enormous investments toward these ends, he continued, but the sheer diversity of immigrants—political refugees, undocumented workers, green card holders, Temporary Protected Status migrants, and so on—means that there’s no one-size-fits-all solution for advancing their education.

Finding affordable housing is another big challenge for many immigrants. “There’s not one universal problem,” Torres said.

Blanco, who handles immigrant legal services for the UC system, said that her job, too, has changed in the aftermath of the 2016 presidential election. When she started in her present assignment, “there was a moment of optimism.”

“It felt like we were really helping with the higher education mission of the university,” she said.

After Trump’s election, “the mood really changed among the students,” particularly as the new administration made clear that it would be tracking down not only convicted criminals who were living illegally in the United States, but also otherwise law-abiding immigrants, including parents and their children.

The federal government’s policy of vacuuming up as many undocumented immigrants as possible has instilled fear among many students, resulting in fewer of them applying for DACA status. In some cases, Blanco said, there have been drops in college enrollment. Meanwhile, Blanco’s center has bulked up from five lawyers to nine to meet heightened demand; her office expects to open around 1,400 cases this year alone.

Asked by Rhee whether any UC students have been caught up in ICE raids, Blanco replied that one UC Berkeley student who allegedly had overstayed his visa was arrested off campus, after being detained at a Southern California checkpoint. He later was released on bond by an immigration judge, and has returned to class.

“That news as you can imagine spread like wildfire throughout the campuses, and it really affected a lot of the students,” Blanco said. If Congress doesn’t act soon to resolve the DACA standoff, states like California will have invested years of education funding in students who legally won’t be able to get work once they graduate.

“I’m very concerned that people won’t even feel motivated to apply to college if they feel that nothing is going to be waiting for them,” said Blanco, who is working with foundations to create a fund so that, in addition to UC, the California State University campuses and community colleges can apply for more legal and other services for their immigrant student populations.

Ly, the Elk Grove mayor, was asked about his personal story, as an immigrant whose parents are Hmong refugees from Laos. Ly said that when he first ran for public office he received hate messages saying things like, “Refugee go back home.” Some people told him that he and his fellow “hillbillies” from the mountain villages of Southeast Asia were bound to fail.

Ly resolved that he would help other immigrants like his family. Elk Grove currently partners with non-profit organizations to help create more housing for more immigrants. Local law enforcement in his city also fosters a constant open exchange with local immigrant communities.

“That really just reinforces the reasons why I am in public service,” said Ly. “It’s really to give voice to the voiceless.” The success of Hmong migrants in the United States has shown other refugee populations that they, too, can make it here, he added, and that someone who only just arrived in the United States belongs as much as anyone.

“If you came here 150 years ago it doesn’t mean you have more rights,” Ly said.

Asked by Rhee what sort of other programs the state should support to integrate immigrants, Torres stressed the importance of civic engagement, and of immigrants knowing about their rights.

“It’s one thing to have ready-to-go lawyers, but we need people to actually talk to them, so they know what their rights are in case of a raid,” he said. It also is vital for California to prepare immigrants to participate in the upcoming U.S. Census, so that they are accurately counted.

Blanco said it was vital not only for immigrants to vote, but also to “show up at all levels of society.”

Ly, responding to a question from an audience member about how best to assist the growing numbers of refugees from Afghanistan who are settling in the Sacramento area, said it’s important for Americans to understand that refugees don’t necessarily come to the United States by choice. Rather, the foreign policy and military actions of the U.S. government end up driving people from faraway lands out of their homes (as was the case of the Hmong after the U.S. retreated in failure from the Vietnam War). Some of these political and humanitarian refugees helped safeguard American lives, as did Ly’s father, whose job during the war was to rescue shot-down U.S. pilots and, when needed, retrieve their bodies.

Another audience member raised concern about ICE officers who show up wearing local police badges, a tactic that confuses (and, some would say, deliberately misleads) immigrants. Police officials in some California municipalities have complained that ICE’s maneuver also makes immigrants conflate federal agents with their street-corner officer, which can lead to less community cooperation with local police.

“There really hasn’t been much that we can do to change the way that ICE brands itself,” Torres conceded, emphasizing that it was important for immigrants to know that police need a warrant to enter your house, for example.

A final audience member asked how, exactly, the panelists would define the phrase “sanctuary city.” It is, Torres responded, a “highly contested” term that dates back to the 1970s and ’80s, when a number of churches and faith-based organizations were providing protection and advocacy for refugees from places like war-ravaged Central America. Lately, the term has “been turned upside-down” by the federal government, Torres said.

But he suggested that California—a place with its own long, troubled legacy of anti-immigrant discrimination and violence—would continue to abide by its pro-immigrant values.

“We’re going to stick to a frame of being a welcoming state,” he said. 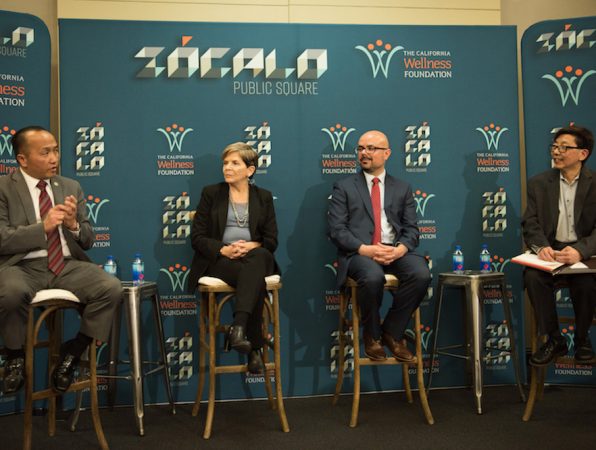 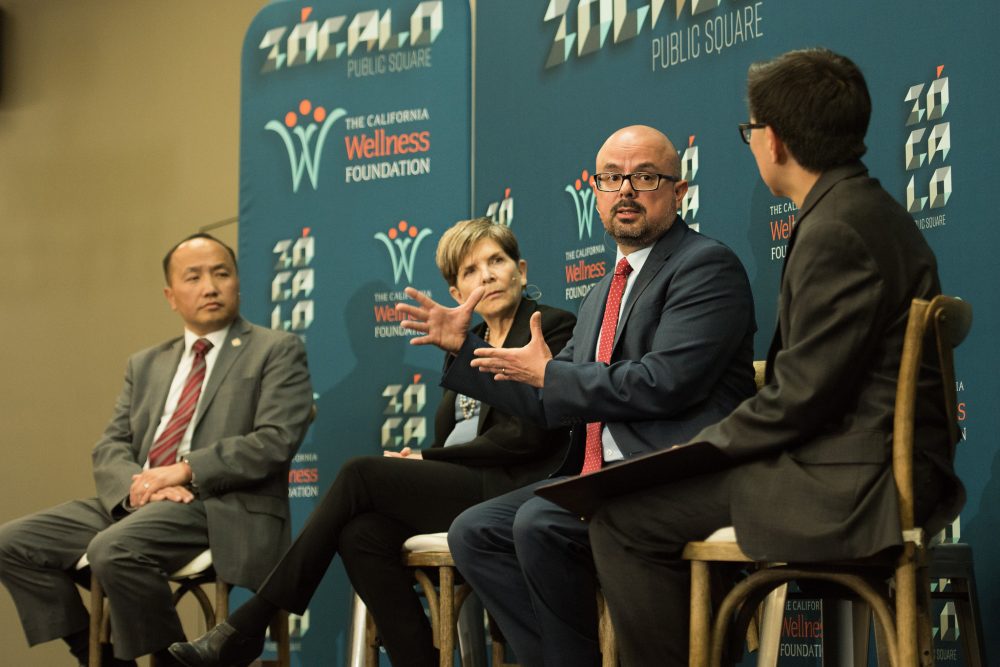 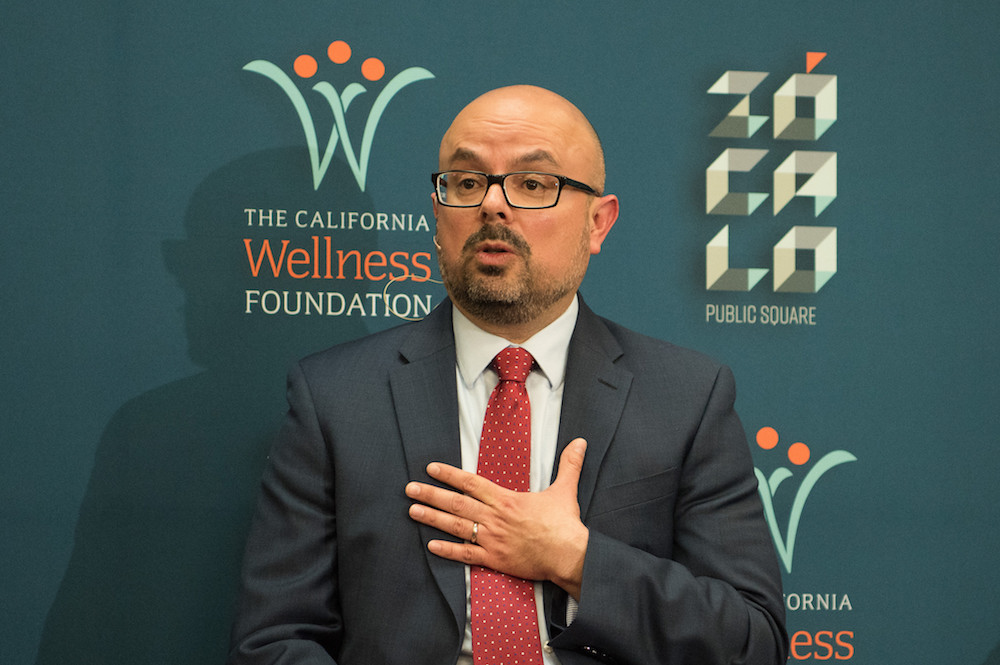 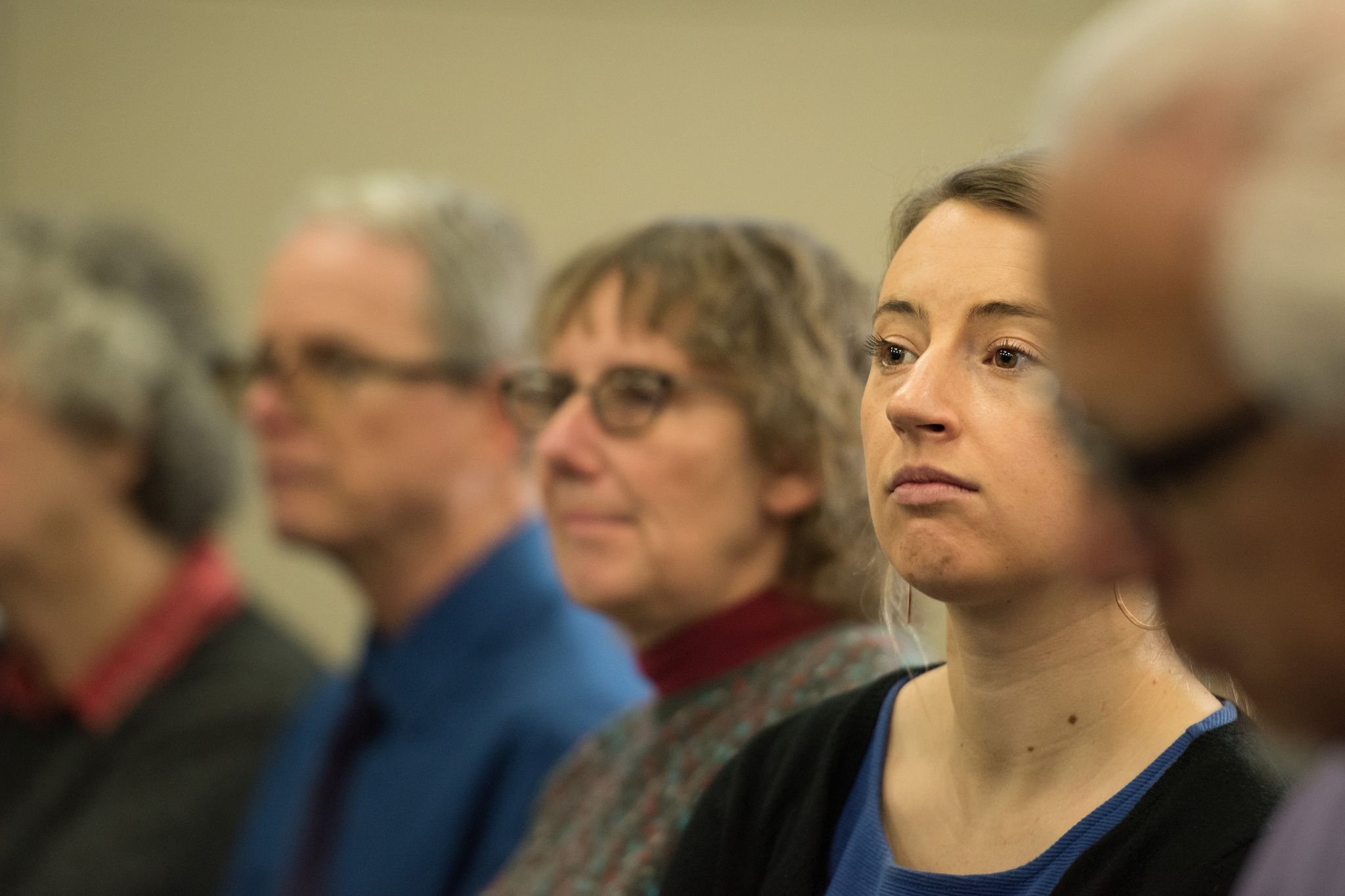 A standing room-only crowd at the Capitol Event Center. 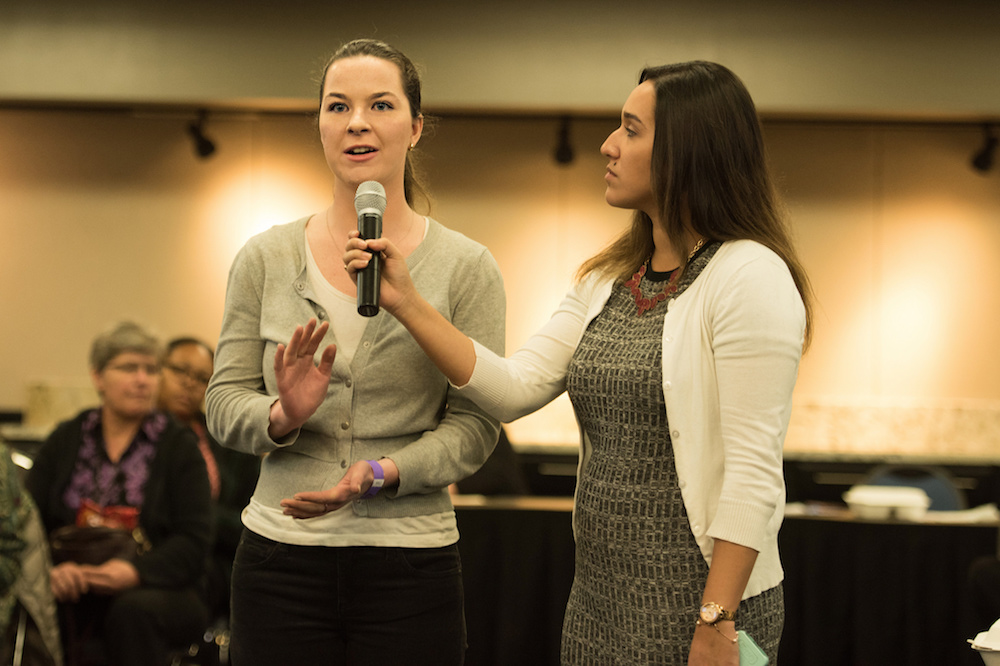 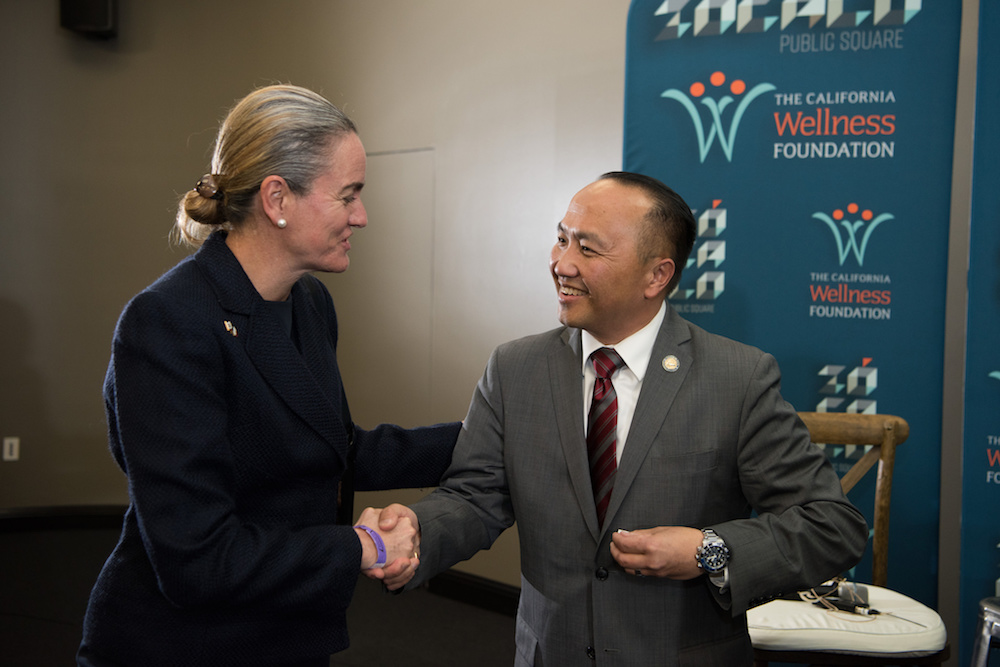 Steve Ly, mayor of Elk Grove, and Liliana Ferrer, general consul of Mexico in Sacramento, speak after the event.