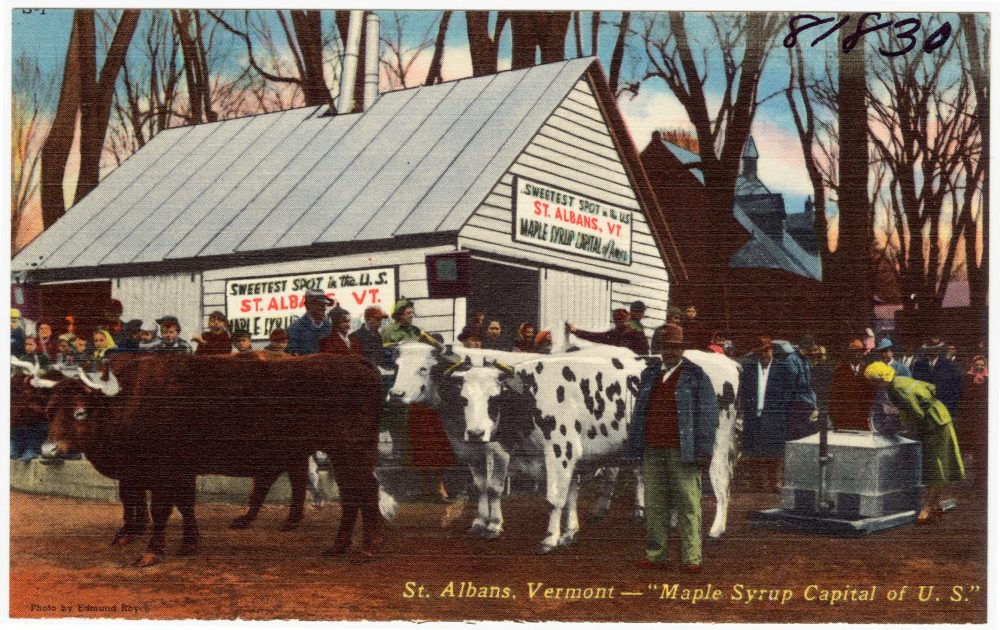 When people all over the country think of Vermont, they think of maple. No matter the reasons that people come here—skiing and leaf-peeping are two—they often take some Vermont home, literally, distilled into a bottle of syrup.

How, exactly, did Vermont come to mean maple?

I live in Vermont, and I do research on the making of maple syrup. It’s called sugaring or sugarmaking around here, which is a throwback to the time when most of the maple sap collected was boiled down until it was cakes of hard, dry sugar. But most people these days experience real maple as syrup, a beautiful amber-brown liquid that is made of exactly two ingredients: sap and heat. The ingredients may be simple, but the threads connecting the state and the syrup are a complex tangle, made up of stories whose seeming simplicity obscures the always messy nature of identity.

When spring is about to spring, but winter is still stubbornly hanging on, the sap begins to run. When the temperature cycles between about 40 F in the day and around freezing at night, the fluidic pressure inside the tree rises enough to push sap out of any breaks in the outer layers of the tree. Holes drilled into the tree and fitted with metal or plastic taps guide this sap’s flow into buckets or intricate systems of tubing that collect the sap.

In the sugarhouse, the sap is boiled: The water leaves in the form of steam, and the sugars get more and more concentrated until it is thick and delicious. Maple syrup has an ineffable, evocative flavor that defies easy definition, and varies with terrain and technique. It is in a category of foods with flavors so singular that they simply cannot be well described by reference to other tastes—coffee, chocolate, huitlacoche, vanilla, good scotch, matsutake, durian.

In pursuit of that flavor and the identity that goes with it, I have wandered into sugarhouses all over Vermont. I wish I could tell you what a typical sugarhouse looks like, but there is no such thing. Some are simple frame structures, open to the elements, and others have high definition TVs, tile floors, and full wet bars. Some sugarhouses have barely enough room for the sugarmaker and the piece of boiling equipment called the evaporator. Other sugarhouses have facilities for filtering, canning, and making secondary maple products like candies and granulated maple sugar.

Many sugarmakers have an open door policy during sugaring season (whether their sugarhouse has an actual door on it or not), and many are used to people wandering in. Friends, neighbors, and family are welcomed into the sugarhouse with the same casual familiarity that one would expect when knocking on the door for lunch, although during sugaring season there is a festive air and a purposeful hustle, so maybe knocking on the door for Thanksgiving dinner is a better comparison.

Strangers are usually welcomed into the sugarhouse as well, but with a different approach. Because the stranger is often a tourist looking for a glimpse behind the curtain of sugaring, or an experience unique to the place they are visiting, sugarmakers have gotten used to having a standard patter, a spiel given to tell the story of maple to someone who is interested but perhaps not yet very knowledgeable.

When I first started visiting sugarhouses, I heard that spiel often. It’s not a bad story, but it is superficial, and it doesn’t get to the heart of what sugaring means.

Now, when I walk into many sugarhouses around Vermont, the sugarmakers get right into their particular sugaring story, as every operation is unique. On a recent trip to a small, utilitarian sugarhouse I’d visited a few times in the middle of the state, the sugarmaker ushered me to the back of the evaporator, the complex rig that combines heat source, pan, and other pieces of machinery to boil sap into syrup. As with many sugarmakers, he was a bit of a tinkerer, and he wanted to show me the plumbing manifold that he’d rigged up to increase the efficiency of his evaporator’s heat exchange. I’d never seen so much plumbing complexity crammed into such a small space.

Another sugarmaker on the other side of the state, deep into the most rural part of Vermont, gave me a sneak peek at her new marketing design and a preview of some upcoming secondary maple products she was working on, like a maple mustard sauce and a maple sugar salad topping. The rolling hills and heavy forests around her operation could seem miles from anywhere, but her operation is as cutting-edge as they come.

Sugarmaking in Vermont has roots in both agriculture and entrepreneurship, and those roots show when you look closely. The level of sophistication that goes into the marketing may seem surprising at first glance, but sugarmakers who sell their syrup are running small businesses. Their rustic agricultural image belies the sheer amount of know-how that goes into sugaring itself.

In Vermont, the story of the syrup stresses the small operator, so that buying a bottle of Vermont syrup is made the equivalent of buying a portable bit of that place, the very hillside or valley where it is purchased.

I arrived at the farm of one sugarmaker with plenty of know-how on a mid-December morning, not long after we had had a pretty fierce storm. I hopped onto one of his ATVs and followed him as he motored into his woods. Maneuvering our four-wheelers around downed trees, we talked about the need to repair his tubing system and clear the woods before the really heavy snows came in January. With a chainsaw, we did a little work in the woods, but mostly surveyed the damage so he could come back out and do real work when he was unencumbered by an anthropologist.

Back at his house, we talked about the economic impacts of sugaring on his dairy farm, the possibilities of opening new markets for maple in Japan and China, the unique family knowledge that is necessary to understand how to sugar on his land, and how his children are going to college so that they can take the business into its next generation.

But all of these unique stories, while revealing, bring up a puzzle: If it’s so complicated and individualized, how can there be such a strong and unified connection between maple and Vermont? How can the identity of the place be so tightly bound up with this one product?

The connection between maple and Vermont is not measurable simply in gallons of syrup made or sales calculated in dollars. We in Vermont don’t make the most maple syrup. Quebec makes at least 70 percent of the maple syrup produced on Earth every year, and that province influences markets and policies all over the maple-making world.

It is precisely because Vermont cannot compete with Quebec economically that the connection between the syrup and the place is emphasized. Quebec makes quality, delicious maple syrup, and they make a lot more of it than Vermont, so Vermont has to sell its syrup on some other aspect, something that makes its quality and deliciousness distinct.

That something is the uniqueness of every sugaring operation in the state. Sugaring everywhere is done primarily by individual people or families who tap trees and boil sap into syrup on their own property. There are large, industrial-scale operations, but they are very few in number.

In Vermont, the story of the syrup stresses the small operator, so that buying a bottle of Vermont syrup is made the equivalent of buying a portable bit of that place, the very hillside or valley where it is purchased. It has carried an idea of small batch, boutique, niche, and micro since long before those words became part of every hipster’s and food blogger’s vocabulary.

An easy analogy can be found in scotch whisky, where a blended whisky is purposefully mixed from many different distillations to create a consistent flavor across a whole product line. Single malt whisky, on the other hand, has peculiar and distinctive flavors precisely because it is only one distillation, made and aged and bottled by itself and therefore carrying the marks of its individual creation. Vermont maple is a single malt.

The relationship of maple and Vermont is real enough, but the intense, personalized connection is heightened to make Vermont’s syrup more appealing. It’s not a false narrative at all—almost all of Vermont’s sugarmakers are individual or family operations. The names on the label are real people, and they are doing the work to get that syrup into the bottle, either by themselves or often with family.

Part of the reason that Vermonters can sell that small, family story along with their syrup is that it’s a real story. They are legitimately putting themselves into the syrup through their effort, their knowledge, and their heritage. Almost every sugarmaker I know is keenly aware of the economics of maple, both here and around the globe. And almost no sugarmaker I have ever met does it for that reason. Make no mistake, sugaring has historically paid the property taxes and put shoes on kids’ feet, and in many cases it still does today. But if that were the only thing it meant, I can’t imagine too many of the people I’ve met doing it.

Sugaring carries more meanings than that in Vermont. For many people here, sugarmaker or not, maple season is the start of spring, when smoke and steam start wafting from sugarhouses all across the state. Because sugaring means so much to us here, it is easy to communicate that meaning to others through the syrup. When a sugarmaker fills up a bottle, they are putting in their syrup, but they are also pouring themselves and this state into that container. By evoking place at such a fine scale, Vermont has made it only logical for the skiers and the leaf-peepers to look to syrup as a way to carry home some little bit of the place as a reminder of their experience here.