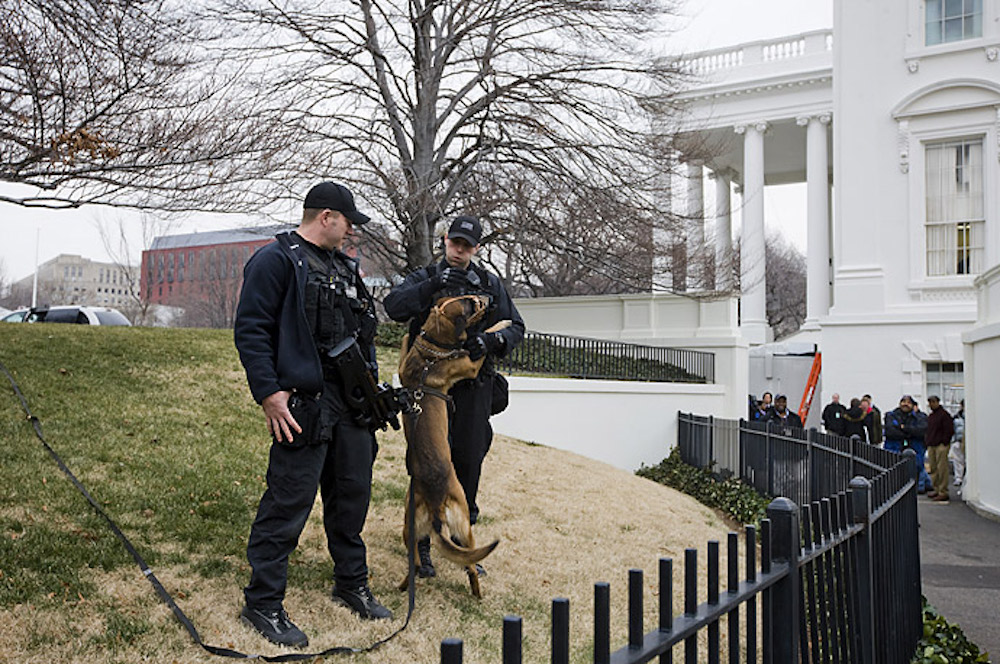 You can’t just drop in on the White House today. Photo courtesy of Wikimedia Commons.

On a warm summer evening in 1954, my high school classmate Gerry and I walked up to the steel fence topped by tall bronze spears that surrounded the Eisenhower White House. There we unzipped pants and violated the perimeter. Once we completed our business, we just walked away.

I hadn’t thought much about that moment until February 2018, when I saw all three cable channels go “live” with “breaking news” from the same spot outside the White House. As I looked at the coverage of a scene that should have seemed familiar, all I could think about was how much has changed.

In today’s tableau, the White House grounds and the streets around them were swarming with Secret Service agents, in and out of uniform, bolstered by D.C. police. What seemed like dozens of official vehicles were either on the move or parked to block any incoming traffic. A fire engine had to be stopped at a gate with an armed guard gate until a bomb-sniffing dog could clear it to go through. With President Trump and the Prime Minister of Australia inside, the White House itself was locked down.

It soon became clear that the real story was not what caused all the action but the action itself. A “female driver,” familiar to law enforcement as “mentally challenged,” had been “apprehended immediately” after her vehicle struck a concrete barrier at 17th and E Streets, on the very outside of the anti-terrorism perimeter. The threat itself was no big deal. What the anchors and experts on cable news sets were talking about was the massive security infrastructure that had been deployed against the unlikely possibility that the threat turned out to be real.

Gerry and I encountered no such obstacles on that night long ago. We were students at Sidwell Friends, the elite prep school where the Obamas would send their children in a much different era. When we went there, Sidwell was segregated, and for us white kids visiting “Negro nightclubs” in downtown D.C. was an adventure. The minimum age to drink beer in the District was 18, and we looked old enough to get served. We didn’t spend much money, but owners and patrons indulged us for reasons of their own, and we were flattered.

On that fateful evening, Gerry and I went to the Rocket Room, where the band played rhythm and blues, the comedian told dirty jokes, and the stripper was almost maternal. We had a few brews, and then walked out onto New York Avenue.

Traffic was light, it was balmy and the air smelled good. For no particular reason, we began to walk toward the White House. We probably talked about school friends, sports, and national politics, which were inescapable at Sidwell Friends. I’m sure we did not talk about our fathers. Mine was Assistant Attorney General in charge of the Criminal Division of the United States Department of Justice. Gerry’s was Legal Advisor to the President.

It didn’t take long before those few beers asserted themselves on our bladders, and we needed a place to pee. Pennsylvania Avenue was still open to traffic in those days, and we crossed where it intersects both New York Avenue and 15th Street, creating the corner of the White House grounds. An occasional car rolled by. We were getting uncomfortable, as we proceeded down 15th and then through an open gate and on to the White House grounds. It was dark under the trees as we approached the fence that surrounded the South Lawn.

On that fateful evening, Gerry and I went to the Rocket Room, where the band played rhythm and blues, the comedian told dirty jokes and the stripper was almost maternal.

The need was urgent, and there was no point in delay. We approached the fence, unzipped, and leaned against the bars so that our streams of urine landed inside. There were no sirens, horns, or buzzers. No blazing lights or barking dogs. No shouts from uniformed guards or Secret Service agents. We walked back to the street and continued on our way.

I don’t think we were being truly rebellious. No doubt our parents would have been angry, as much about the beers and the Rocket Room as about our disrespect for presidential surroundings. Had we been stopped and identified, we probably weren’t significant enough to make The Washington Post. But the moment of teenage assertiveness was worth the risk and, after all, we needed to pee.

When we reached the sidewalk, Gerry said, “now you can tell your grandchildren you pissed on the White House lawn.” Of course, he was making a joke about false bravado in 1954. But, considering the scene played out on the cable news channels in 2018, it will take massive changes in both politics and society before anybody can ever do what we did again.