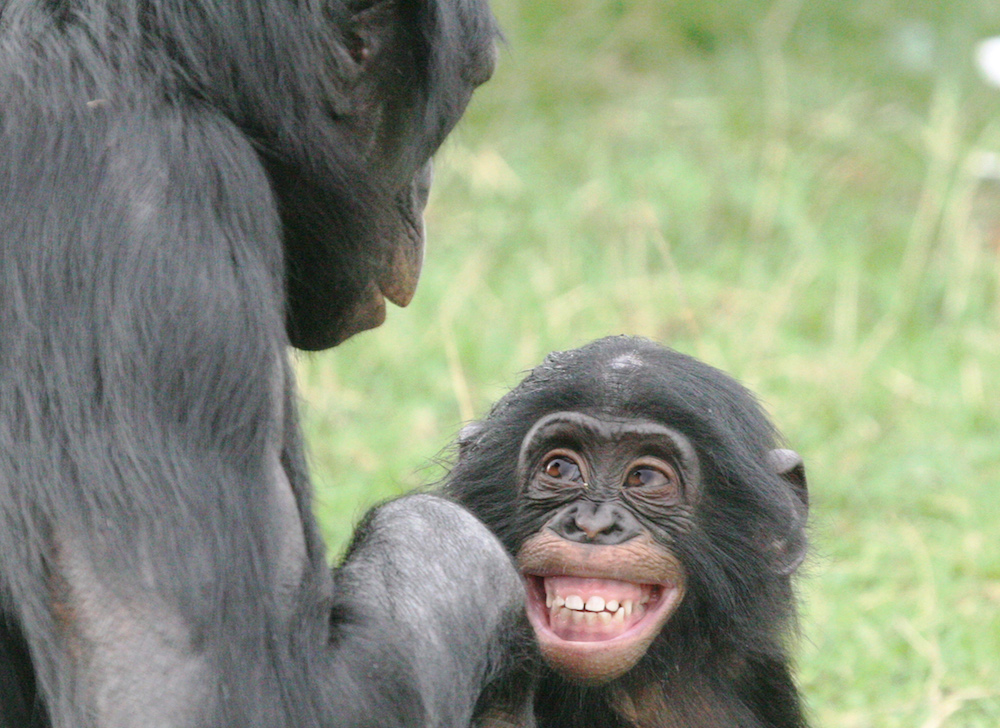 Researchers have identified many chimpanzee behaviors—from foraging for food to leaf-grooming—that appear to be culturally induced. Photo courtesy of Wikimedia Commons.

In 1961, famed primatologist Jane Goodall discovered that wild chimpanzees were fashioning tools from sticks and using them to fish termites out of their nests—revolutionizing our understanding of culture and animal intelligence. Her mentor Louis Leakey telegrammed her that “now, we must redefine ‘tool,’ redefine ‘man,’ or accept chimpanzees as humans.”

Nearly 60 years later, this redefinition—of chimps, culture, and ourselves—continues. There are now seven chimpanzee field studies that span more than 25 years, as well as many shorter ones. These long-term studies have produced exciting new information on how chimps use simple tool technologies. The sum of all this work has given us a rich portrait of what a truly cultural species our closest relative is.

It’s one thing for an animal to use a simple tool. Sea otters place rocks on their chests and hammer shellfish on them as they float among the waves. Egyptian vultures use stones to crack open ostrich eggs.

In contrast, chimpanzees use tools in different ways from forest to forest across equatorial Africa. It’s clear that the differences—using sticks to fish for termites in one site and using stone tool hammers in another—vary as a result of local traditions, not differences in genetic programming.

Since the late 1990s, there has been a growing awareness of chimpanzee cultural behavior—and it’s not limited to tools. In the Mahale Mountains of Tanzania, two chimpanzees will clasp their right hands above their heads while their left hands groom their partners. Only 100 kilometers away at Goodall’s Gombe, the grooming partners grasp branches instead of hands. This sounds like a trivial difference, but primatologists believe the difference between the Gombe and the Mahale is analogous to the myriad little cultural differences in human societies. In Europe, moving your head side-to-side means no; in India, it can subtly signal agreement.

Only a highly intelligent species, to which learning is all-important, will show these sorts of variations. Now, when we find a new chimpanzee population in Africa, we’re not just finding a new gene pool. We’re also discovering a new culture.

As the number of long-term field studies of chimpanzees grew, so did our awareness of the scope of cultural diversity across Africa. Well into the fourth decade of chimpanzee field research, psychologist Andrew Whiten of St. Andrews University compiled the full complement of cultural variation across Africa, using information contributed by co-authors from each of the longest-term studies. They identified 39 behaviors across seven sites that appeared to be culturally and not environmentally induced. These included both foraging for food and more social traditions, like leaf-grooming.

Primatologists are still engaged in a search for the social mechanisms by which these new traditions emerge and become entrenched.

Leaf-grooming is one of the few symbolic cultural traditions that varies from site to site and is practiced by many East African chimpanzee communities. The chimps pluck leaves and groom them as intently as they might pick through the hair of another chimp. Other chimps see the behavior and understand it as signaling the desire to groom or be groomed.

Another tradition that indicates symbolic communication is leaf-clipping. A male chimpanzee audibly clips the leaves from a plant stem using his fingers and teeth. This appears to signal a desire for sex with a particular female, and perhaps some sexual frustration.

How do such traditions begin and spread? Primatologists are still engaged in a search for the social mechanisms by which these new traditions emerge and become entrenched. We don’t know yet whether such traditions appear infrequently and are then readily adopted by others, or if they pop up often but are rarely adopted. It’s even possible that the pattern of traditions we now see across Africa may actually reflect the fact that many local traditions have selectively gone extinct. Culture may emerge and spread within a community readily, but it’s possible that it disappears just as often.

Calling chimpanzee behavioral variation “culture” is controversial for some anthropologists. My colleagues in the human-oriented fields of anthropology and psychology don’t accept that many chimpanzee behaviors come about through social learning, even though they span activities from hunting to food-sharing, showing great geographic variation between communities with distinct behaviors. This reluctance to embrace chimpanzees as cultural animals may be healthy scientific skepticism. Or it may reflect the opposite: a certain obtuseness about chimpanzee uniqueness.

Cultural anthropologists tend to adopt an exclusive rather than inclusive definition and allow culture as a concept only among human societies. Culture is a human universal, so almost anything that we do that is not genetically hardwired could be called cultural behavior. Even when we’re talking about humans, culture is not easy to define.

But it’s possible to apply criteria used in studies of human culture to chimpanzees, which could help further the debate. In 1962, famed ethnographer Alfred Kroeber published a time-tested checklist for human culture. Recently, primatologist William McGrew of St. Andrews University applied Kroeber’s checklist to many chimpanzee studies and found that the same traditions applied—albeit with a simpler overall pattern. Chimpanzees use tools, but a simpler toolset is found; they show cross-populational differences in traditions, though on a simpler scale than seen among human cultures.

Cultural anthropologists claim symbolic behavior is at the heart of culture. That is, humans do things—and create things we call cultural artifacts—that have no concrete connection to the thing itself. We invent symbolic sounds called words that have no connection to the word’s meaning itself. For example, nothing in the word red tells you what something red looks like. And the anthropologists are right—language is a central aspect of human culture that goes far beyond anything that chimpanzees do in the wild or can be taught to do in captivity.

Yet new cultural differences in chimpanzee behavior across Africa are being uncovered every year. Some are subtle differences in the details of tool use or body language which appear patently cultural. Others involve behavior where the line between learned behavior and response to local habitat isn’t clear. Why do chimpanzees who live in Forest A prefer to catch baby monkeys rather than adults, but those in Forest B prefer to catch adult monkeys? Does the particular structure of each forest lend itself to one practice or the other? Or does each group perpetuate techniques that have been practiced by male hunters simply because older males had always hunted that way?

We are still a long way from understanding exactly why some traditions become entrenched for generations while others wink out of existence quickly, or fail to take hold in the first place. But in 2018, we can say that chimpanzees are defined by their cultural traditions in a way that is unmatched by any other animal on Earth, save their closest relatives—ourselves.