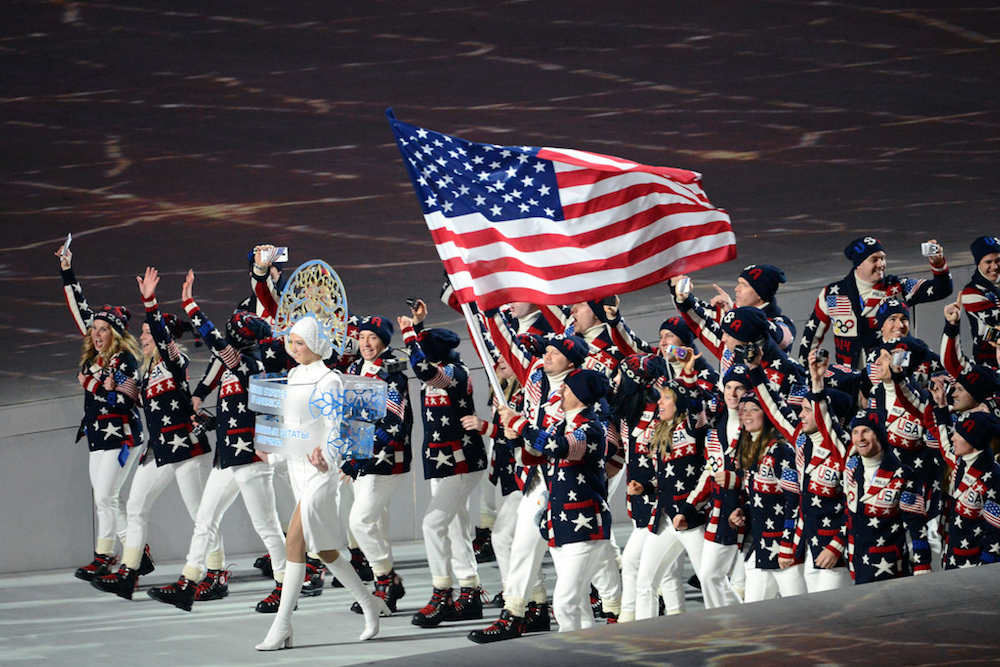 Team USA at the opening ceremony of the 2014 Winter Olympic Games in Sochi, February 10, 2014. Photo courtesy of Tim Hipps/Wikimedia Commons.

Every four years, in summer and in winter, the Olympics open with a choreographed ceremony dominated by national delegations wearing national uniforms parading behind their respective national flags. Each event culminates in a medal ceremony that confers honors to the top three competitors, raises their national flags, and plays the national anthem of gold medal winners. The overall medal count has become a de facto Olympic competition pitting country against country for international prestige and bragging rights.

Similarly, the World Cup fuses sport and national identity on a quadrennial basis. In both cases, media coverage transforms feats of physical prowess into stories of national triumph or defeat, and in the process recasts athletes, many of whom the larger public has never cared about previously, into national heroes and sometimes even villains.

Lost in the drama and pageantry is the question of why sports should be framed in terms of political geography at all. How is it that we have learned to see the world as a collection of countries?

A nation is a group of culturally similar people who believe they belong together and deserve to govern themselves. This way of thinking about the world, or imagining the world, begins by kindergarten, when children are taught to read basic maps and globes depicting the world as organized into a jumble of colorful, interlocking shapes demarcated by clear borders, invariably accentuated as black lines. We are taught that these borders delineate distinct peoples, societies, and environments, and dutifully memorize their locations, names, and physical features—and of course their flags—by coloring maps with crayons. Teachers emphasize knowing our own place within this political jigsaw puzzle, and, over time, we come to identify ourselves as belonging to a nation.

The staging of the Olympics and the World Cup and the teaching of geography in the intimate confines of an elementary school classroom seem worlds apart, yet both are simultaneously cause and effect to how we think of the world as a world of borders, a globe comprised of clearly partitioned, sovereign political territories. The process of nationalization, however, is much more complicated than simply putting crayons in the hands of five-year-olds. It extends beyond education to encompass most aspects of daily life, from the media and popular culture to professional and political organizations.

Today’s most pressing debates are rooted in and around notions of borders. Some focus on overturning accepted borders, such as the attempts of ISIS to establish a new caliphate across Syria and Iraq, the Chinese government’s ongoing efforts to secure control over the South China Sea, or the disputes between Russia and Ukraine over eastern Ukraine and Crimea.

Other debates have little to do with the location of the borders, but rather involve how borders should function and be marked or policed. President Trump’s call to build a new southern border wall funded by Mexico is a prominent example. Another is the struggle among members of the European Union to maintain open borders while simultaneously strengthening border controls along their southern and eastern peripheries—demonstrating the poignancy and power of borders in contemporary politics. For better or worse, our disparate views on belonging, migration, trade, political populism, sectarian strife, natural resource extraction, environmental sustainability, climate change, and even, of course, global sports, are filtered through the spatial paradigm of a bordered world.

The idea of grouping culturally similar peoples within their own states makes sense in theory, but has proven impossible to put into practice without widespread forced migration and horrendous violence.

This is a relatively recent phenomenon, though. It is also one that is incomplete, inconsistent, and might ultimately prove to be transitory.

Scholars trace the origins of our modern notions of borders to Western Europe. As that region transitioned from the Middle Ages to the Early Modern Period, Europe was structured around a political system of mutual obligations and privileges between lords, vassals, and peasants, later known as feudalism. Lacking the ability to govern their kingdoms directly, kings granted nobles the right to administer certain areas, or fiefs, on the king’s behalf in exchange for allegiance and military service. The king retained nominal authority over the kingdom through this system of vassalage, but nobles soon gained considerable autonomy over their fiefs, including the rights of taxation and hereditary title.

Nobles repeated the basic arrangement with lesser nobles and further partitioned their estates into ever smaller fiefs, eventually creating a confused patchwork of overlapping loyalties and decentralized governance scattered across an assortment of principalities, duchies, counties, etc. In some cases, nobles held fiefs in different kingdoms and therefore nominally owed allegiance to multiple kings. The situation was further complicated by what we would today call non-governmental organizations, such as the Catholic Church, military or monastic orders, occupational guilds, and city-states. Within this feudal system, clear territorial borders were unnecessary, as long as lords and vassals honored their mutual obligations.

This decentralized system began to break down by around the 15th century for complex reasons, including the rise of capitalism and wage labor, advances in military technologies, and the growth of an urban-based merchant class. The incessant religious wars that marked the Reformation brought developments to a head, culminating in the Peace of Augsburg in 1555 and the Peace of Westphalia in 1648.

These treaties helped usher in the notion of territorially sovereign states, which became the foundation for the contemporary international system. Basically, these monarchs mutually recognized each other as possessing the right to exercise absolute authority over their territories free from outside interference. In theory at least, each monarch possessed absolute sovereignty over his or her territory and all the people within it.

During this transition, monarchs also began to acquire the tools to more directly exercise sovereignty, most notably standing militaries, professional bureaucracies, and systematic taxation. The grounding of state sovereignty in territory also created a need to precisely determine the territorial extent of the state. The blurry borders of the Middle Ages were incompatible with these new notions of territorial sovereignty. Aided by advances in surveying, navigation, and cartography, governments carefully mapped and marked their respective territories. Borders as we conceive of them today came into being.

The idea of grouping culturally similar peoples within their own states makes sense in theory, but has proven impossible to put into practice without widespread forced migration and horrendous violence, as demonstrated by two World Wars, among other tragedies.

Those western notions of the nation-state, territory, and borders—and their underlying assumptions—would eventually be exported around the world by force through colonialism to form the foundation of the modern nation-state system. Still, this nation-state system contains a fundamental contradiction: The idea of territorial sovereignty exercised by states can’t always be reconciled with the right of national self-determination and sovereignty.

Some saw the end of the Cold War, the advent of the internet, and the growth of multinational corporations, organizations, and treaties, among other developments, as heralding an embryonic borderless world. Globalization became a buzzword. Yet because of our continued proclivity to think of most issues, from politics and economics to identity and culture, in state-centric terms, the framework of territorially sovereign nation-states marked by clearly defined, linear borders continues to exert a powerful hold over our understanding of the world and our place in it.

During this year’s winter Olympics, television commentators debated whether America’s historically low medal count in PyeongChang should be a cause of national concern. Brazil’s 7-1 World Cup loss to Germany in 2014 provoked discussion of a national identity crisis. The fact that these issues were raised in earnest demonstrates the continued power of borders to frame how we think about the world, including in such apparently trivial matters as sports.

We may live in a world of unprecedented connectivity marked by dramatically increasing flows of people, goods, technologies, and information, as well as issues like climate change, sectarian strife, demographic transitions, and economic dislocation that seem to beg for global responses, yet the world will remain a very bordered one for the foreseeable future.