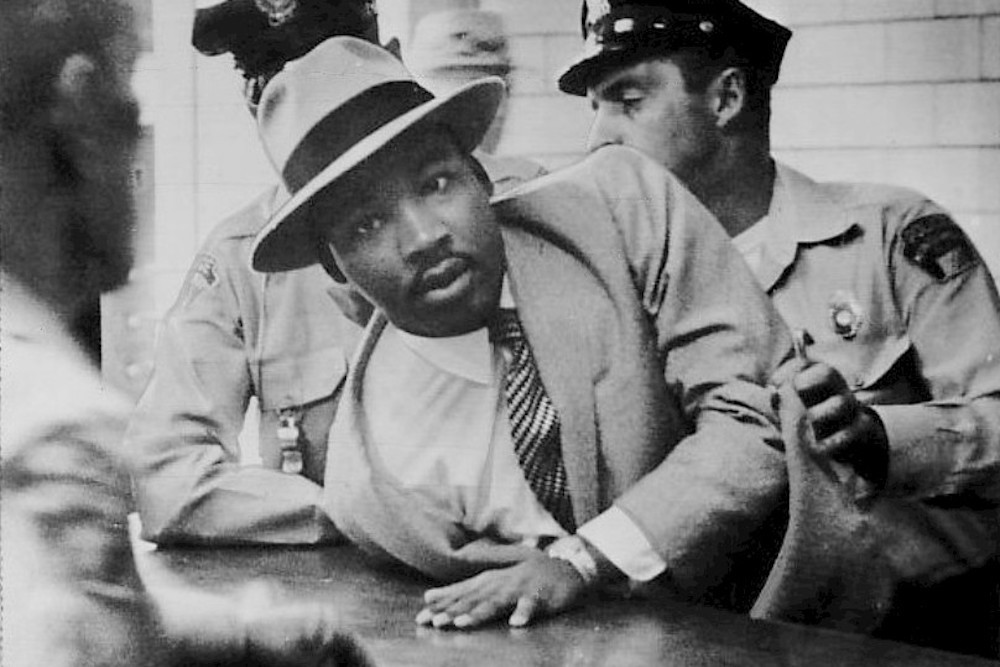 According to an early 1968 Harris Poll, the man whose half-century of martyrdom we celebrate this week died with a public disapproval rating of nearly 75 percent, a figure shocking in its own day and still striking even in today’s highly polarized political climate.

White racial resentment was still a critical factor at that point. But Dr. Martin Luther King, Jr.’s unfavorable numbers were at least 25 points higher in 1968 than in 1963, and his faltering appeal over the final years of his life was also a consequence of appearing to fall behind his times in some respects even as he was leaping well ahead of them in others.

A day after returning home in December 1964 from a tour whose most important stop was Oslo, the Nobel Laureate for Peace joined a picket line at Atlanta’s Scripto Pen factory, where some 700 workers were striking for better wages for less skilled employees. Though it was a remarkably humble gesture for someone who had received such a lofty affirmation, King’s actions that day and his call for a nationwide boycott of Scripto products won him few friends in his hometown’s white, staunchly anti-union business community.

His picketing also foreshadowed a future in which King would move beyond the bloody battles against blatantly illegal state and local racial practices in places like Birmingham and Selma. Not content with the gains registered in the Civil Rights Act of 1964 and the Voting Rights Act of 1965, he resolved to pursue a more expansive, aggressive, and (to white Americans, especially) unsettling socioeconomic and political agenda, one that would draw him into another fateful labor dispute some three and a half years later in Memphis.

While still involved in the Scripto affair, King sat for a Playboy interview with Alex Haley, in which he endorsed a massive federal aid program for blacks. Its whopping $50 billion price tag was, he pointed out, less than annual U.S. spending for defense. Such an expenditure, he argued, would be more than justified in “a spectacular decline” in “school dropouts, family breakups, crime rates, illegitimacy, swollen relief rolls, rioting, and other social evils.” Many poor whites were “in the very same boat with the Negro,” he added, and if they could be persuaded to join forces with blacks, they could form “a grand alliance” and “exert massive pressure on the Government to get jobs for all.”

King had made passing allusions to this possibility before, but a straightforward call for an active biracial coalition of have-nots was just as terrifying to white ruling elites, be they on Peachtree Street or Wall Street, as it had been when raised by the Populists in the 1890s.

King did nothing to quell these concerns when he later told David Halberstam that he had abandoned the incremental approach to social change of his civil rights protest days in favor of pursuing “a reconstruction of the entire society, a revolution of values,” one which would “look uneasily on the glaring contrast of poverty and wealth with righteous indignation.”

King’s vision of a “revolution in values” was not purely domestic. In April 1967, he denounced American involvement in Vietnam, once at his own Ebenezer Baptist Church in Atlanta and once at Riverside Church in New York before 3,000 people, on April 4, precisely a year before he was killed. He decried the hypocrisy of sending young black men “eight thousand miles to guarantee liberties in Southeast Asia which they had not found in Southwest Georgia or East Harlem.” Beyond that lay the painful irony of seeing them join white soldiers, with whom they could “hardly live on the same block in Chicago or Atlanta,” in “brutal solidarity” as they torched “the huts of a poor village.” In this they were, however unwittingly, agents of a U.S. policy that destroyed and depopulated the countryside, forcing its former inhabitants to take refuge in cities teeming with “hundreds of thousands of homeless children” who were “running in packs on the streets like animals.”

Former Student Non-Violent Coordinating Committee Chairman Stokely Carmichael observed that, in this case, King was taking on not a hapless, wholly unsympathetic villain like Birmingham’s Sheriff Eugene “Bull” Connor, but rather “the entire policy of the United States government.” The consequences were swift and severe: An outraged President Lyndon Johnson cut off all contact with King. And a great number of black Americans—including many old allies and colleagues from the civil rights years—warned that his stance could have devastating consequences for their cause.

King hardly fared better in pursuing his domestic agenda. It was one thing to capture public sympathy nationwide when pitted against the raw hatred and brutality that seemed the peculiar province of whites below the Mason-Dixon Line. It proved quite another to persuade whites outside the South to share their neighborhoods and jobs with blacks, or to support expensive federal assistance programs dedicated to helping blacks overcome the historic disadvantages imposed on them by whites of earlier generations.

Not content with the gains registered in the Civil Rights Act of 1964 and the Voting Rights Act of 1965, [King] resolved to pursue a more expansive, aggressive, and (to white Americans, especially) unsettling socioeconomic and political agenda.

King had a better grasp of what he was up against after his 1966 open-housing campaign in and around Chicago, where he confronted white mobs he described as more “hateful” than any he had seen “even in Mississippi or Alabama.” In this context, his own stern insistence on strict adherence to the doctrine of nonviolence met with growing disdain among a younger generation of black leaders. Tired of relying on the excruciatingly slow process of peaceful protest and tedious negotiation, some mocked King’s ministerial oratory and called him “De Lawd.”

It was impatience with King’s doctrine of nonviolence that turned what would prove to be his last march, on behalf of striking sanitation workers in Memphis on March 28, 1968, into a riot. Some marchers quickly broke ranks to break store windows, and looting was soon underway. An aggressive police response, complete with tear gas and billy clubs, led some protesters to retaliate with Molotov cocktails. By the end of the confrontation, one person was dead and some 50 others wounded. Feeling repudiated and ashamed by this failure to prevent violence, King had to be pressured into returning to Memphis a week later for yet another march, one that a single assassin’s bullet on April 4 assured he would never lead.

When Stokely Carmichael originally scheduled a press conference for April 5, 1968, he had planned to use it as a platform for demanding the release of fellow black militant H. Rap Brown, who had been stuck in a Maryland jail for several weeks. Instead, he devoted but a few sentences to the plight of “Brother Rap” before declaring that “white America made its biggest mistake last night” by killing Dr. Martin Luther King.

King’s slaying meant the death of “all reasonable hope,” Carmichael warned, because he was “the only man of our race … of the older generation who the militants and the revolutionaries and the masses of black people would still listen to” even if they no longer agreed with what he had to say. There would be no more “intellectual discussions.” Black Americans would now retaliate for the murder of one of their leaders by seeking their justice not in the courtrooms but in the streets.

King’s view of the Vietnam War would approach the mainstream of American thought within a few years. And his condemnations of American militarism and gross disparities in wealth and opportunity still echo, though to little more effect than he was able to achieve 50 years ago.

Yet the basis for today’s approval rating north of 90 percent can be captured succinctly in carefully cropped newsreel footage of King’s countless confrontations with vicious, inflammatory bigots and his magnificent oratory that day in August 1963 at the Lincoln Memorial when achieving his “dream” seemed largely a matter of rallying his countrymen against institutionalized racial persecution in the South. Overly narrow historical memories typically serve a purpose, and in this case it is far more comforting to focus on Dr. King’s success in making a bad part of the country better than to contemplate his equally telling failures to push the whole of America to become what he knew it should be.