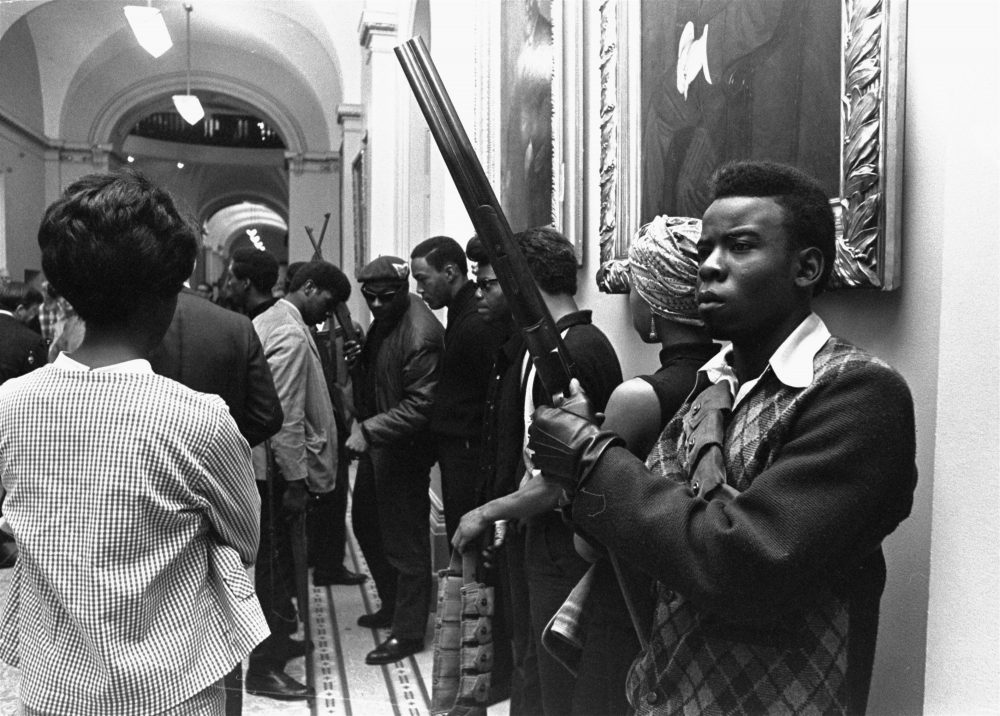 Armed members of the Black Panthers Party stand in the corridor of the Capitol in Sacramento today, May 2, 1967. They were protesting a bill before an Assembly committee restricting the carrying of arms in public. Photo courtesy of Walt Zeboski/Associated Press.

In 1966, it was legal to openly carry loaded firearms in the state of California—a legacy of the Gold Rush. In Jackson, a Sierra foothills town that retained the flavor of that era, one state senator was often seen wearing a holstered pistol.

But just a year later, the state legislature abolished open carry. It took a moment of racial dramatics at the state capitol in Sacramento, where I was a reporter at the time.

One day in the spring of 1967, Governor Ronald Reagan was scheduled for lunch with 8th-grade school kids on the capitol grounds. He’d been elected just a few months before, and the presence of a Hollywood-star-turned politician had increased the size of the press corps. TV stations that previously covered state government remotely now established their own Capitol bureaus.

As the new team for KRON-TV in San Francisco, my cameraman and I were jostling for space on the steps of the staircase that descends to 10th Street on the Capitol’s west side. Veteran newspaper reporters were grumbling about the trivial “picture stories” they were now being required to cover.

Then, suddenly, it wasn’t about the celebrity governor anymore.

Several cars pulled up to the 10th Street curb. As passengers got out, they made no attempt to hide the fact that they were heavily armed.

About two dozen African-American men and women, some wearing leather jackets and black berets, started toward the Capitol carrying rifles, shotguns, and pistols. They were not holding the weapons in a threatening manner; they were pointing them in the air as they marched up the steps and into the building. The news horde—with cameras rolling—stumbled backwards ahead of them, up the carpeted inner stairs to the next floor and into the chamber of the state Assembly, where a legislative session was underway.

Typically, sessions were sleepy occasions that didn’t draw disruptive behavior. Some legislators would doze off during debates after hiding their liquor bottles on the sills of windows overlooking the Capitol grounds.

This time, when the armed group entered the chamber, Democrats and Republicans dived under their desks as the President Pro Tem called for order. Meanwhile, one of the armed men began a harangue about “gun control.” Speaking to the TV cameras, in a speech that was clearly rehearsed, he denounced “the racist California Legislature” for “keeping the black people disarmed and powerless.” 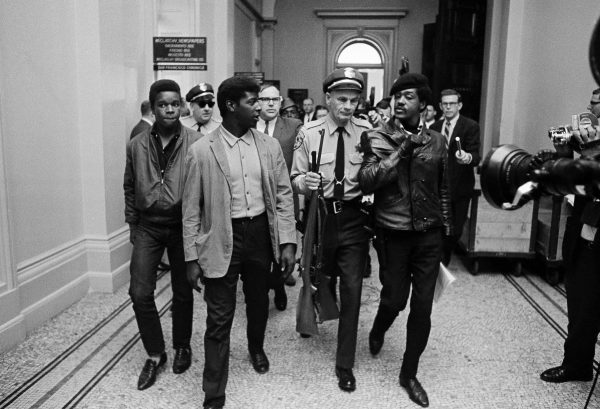 A California State Policeman escorts Bobby Seale (on right, with beret) and other members of the Black Panther Party down the corridor of the Capitol in Sacramento, May 2, 1967. Photo courtesy of Associated Press

After about five minutes (which seemed much longer), three State Capitol Police officers showed up at the back of the chamber. They were part of a modest force, composed mainly of retired warehouse security guards and others the state attorney general would later call “doorknob shakers.”

On that day in May 1967, the officers started by asking the armed demonstrators to hand over their guns. In another startling gesture, the little army complied.

The officers then led the way to another part of the building. The news crowd followed along, now carrying light poles and extended microphones, bumping into each other and tripping over electric chords while shouting questions: “Who are you? What are you here for?”

But the armed demonstrators had made their point; they were disciplined, and they weren’t talking anymore. In the office, the Capitol Police determined that the guns were not loaded. (Some other reporters’ accounts said the guns were brought in loaded, and later unloaded inside the Capitol, but I don’t remember it that way.) Even if the guns had been loaded, that was legal under state law, so long as they weren’t pointed at anyone. So, there was no reason not to return them. The demonstrators took their weapons back to the cars on 10th street, and drove away.

They were gone … but just for the moment.

News had been made, although it had nothing to do with the Reagan photo-op. The governor had been hustled away from the Capitol grounds by his staff with little notice. Instead, for the first time, it was the Black Panther Party for Self Defense that was the subject of national headlines and TV coverage.

Bobby Seale, who read the prepared statement indicting the legislature as “racist,” would go on to protest the Democratic presidential convention in Chicago in 1968 and later run for Mayor of Oakland. Huey Newton, another new face, would also develop a complex public profile, earning a Ph.D., then fleeing to Cuba until he was cleared of murder and assault charges.

Their 1967 appearance in Sacramento was reported as an “invasion” by newspapers and TV (KRON included). It certainly looked—and felt—that way. But in fact, the Panthers were not there to threaten the use of arms. They were engaged in a perfectly legal—though highly unorthodox—effort to lobby elected lawmakers. Pending legislation had been aimed directly at them and their modus operandi, and they were there to register opposition.

When the armed group entered the chamber, Democrats and Republicans dived under their desks as the President Pro Tem called for order.

The Party had been founded the year before in Oakland with the slogan “Power to the People.” Its leaders, including Newton and Seale, openly, and legally, carried loaded guns—not to initiate force, they insisted, but to protect black people from racist police. In response, Oakland’s Republican Assemblyman Don Mulford had proposed a measure abolishing open carry in California once and for all. He called it the “Panther Bill.”

As it turned out, the Panthers’ opposition was a dismal failure. The “invasion” by armed black people had taken its toll. The “Panther Bill”—gun control that it was—had the support of the National Rifle Association of the day. The 120-member Legislature (with six blacks, three women, and all the rest white men) passed the measure with an overwhelming, bipartisan majority. Republican Governor Reagan—supporter of the Second Amendment as he was and would always be—signed it into law saying, “There’s no reason why on the street today a citizen should be carrying loaded weapons.”

Led by Seale, Newton, and others, the Black Panther Party would become a controversial force in America. J. Edgar Hoover would hyperbolically call its members “the greatest threat to the internal security of the country.” But the party would not last. Over time, the NRA has come to advocate guns in all kinds of public places. The NRA’s Chief Lobbyist, Chris Clarke, now says, “Unequivocally, we support open carry.”

But open carry is still illegal in California. Now—as it was then—the real issue is not the guns being carried but, rather, who does the carrying.

African Americans are still denouncing police shootings in almost the same language used by Bobby Seale 51 years ago. And the latest alleged victim was Stephon Clark, a young black man armed with a cell phone and gunned down in his grandmother’s backyard a few miles south of the State Capitol in Sacramento.