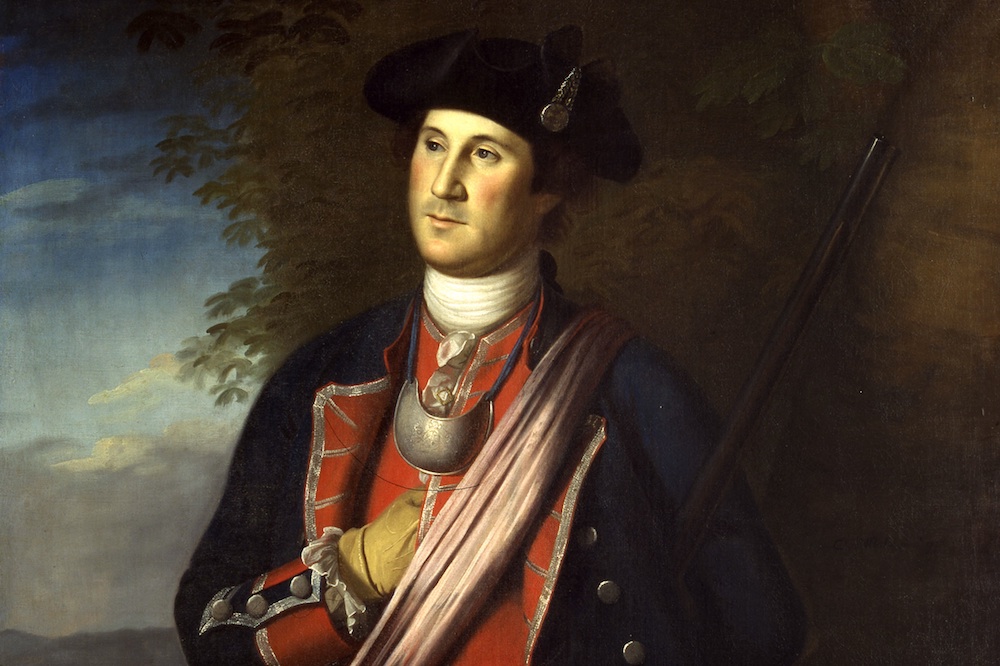 Portrait of George Washington (1772), by Charles Willson Peale, the earliest authenticated image of the future president, shows him in his colonel’s uniform of the Virginia Regiment of the French and Indian War. Image courtesy of Wikimedia Commons.

At 21 years of age, George Washington was a very different man than the one we know and hold sacred, different from the stately commander, the selfless first president, the unblemished father of our country staring off into posterity. This young Washington was ambitious, temperamental, vain, thin-skinned, petulant, awkward, demanding, stubborn, hasty, and annoying.

What is truly remarkable about the 20-something Washington, however, is not that he struggled and stumbled and made some terrible mistakes. It is how profoundly he learned from them. Washington’s arc of transformation from self-centered youth to selfless leader offers an example to us all.

Washington’s father, Gus, a Virginia tobacco planter and slaveholder of middling status, died when George was 11. Gus left the bulk of his plantation lands to George’s older half-brothers, thus leaving the young Washington without a way to make a living. After his mother emphatically rejected his request to go to sea at age 14, he took up surveying. This was fortunate. Under the mentorship of the aristocratic Fairfax family, the teenage Washington was soon surveying Virginia’s frontier, making good money, and buying his own land there.

Ambitious and eager to climb in the Virginia aristocracy, Washington took a part-time officer’s post in the Virginia colonial military and volunteered to cross the wintry Appalachian Mountains into the Ohio Valley wilderness when he was 21. His mission was to carry a message from Virginia’s British governor to the commandant of a French fort deep in the forest. It said, in essence: Stay out! These lands belong to King George! This launched the young Washington on a series of harrowing adventures in the Ohio wilderness that nearly killed him. At one point he tumbled off a makeshift log raft into a half-frozen river. The real trouble began, however, after Washington delivered the French commandant’s reply to the Virginia governor. The commandant politely but firmly declined to leave.

The indignant Virginia governor dispatched Washington back into the wilds at the head of a small military party, but warned him to be cautious and avoid being the aggressor. Washington did the opposite. He ambushed a small French party while they were breakfasting at dawn. Then one of Washington’s Indian allies tomahawked open the skull of the French officer in charge. It turned out the party Washington attacked was a French diplomatic detail—or so its members claimed—trying to deliver a message to the British.

Instead of retreating and reconsidering at this point, or engaging diplomatically, Washington, eager and cocksure, pushed ahead. He bragged that he enjoyed hearing bullets whistle and that he would drive the French back to Montreal. He built a flimsy stockade named Fort Necessity and made a stand against the French and their Indian allies.

It was a disaster—his troops were slaughtered, with about 100, or one-third of them, killed or wounded. Washington was forced to surrender, but it was too late. With his mistakes in 1754, he had personally ignited the French and Indian War, which would spread to Europe and, known there as the Seven Years’ War, last until 1763.

Surprisingly, this did not end his military career. Remarkably brave in battle, he was eventually named commander of Virginia’s provincial troops in that war when he was 23. Washington was responsible for protecting Virginia’s frontier settler families from Indian and French raiding parties. Initially, he seemed largely focused on himself—his “honor,” his reputation—and driven by pride. He tried to strike up a personal correspondence with Sally Fairfax, with whom he was infatuated, the charming wife of his good friend George William Fairfax. He began to see himself as an actor on a grand stage, and Sally as a willing audience. Thin-skinned, he quit or threatened to quit at least seven times as a Virginia officer—over too little pay, jealousy toward higher-ranking officers, newspaper criticism.

Civilian friends warned him if he quit then, in the middle of the war, that he truly would sully his reputation. He deeply coveted a British Royal Army officer’s commission—a prestigious “King’s” commission instead of a colonial one—but, to his lasting bitterness, Royal Army commanders rebuffed his many requests. His emotional neediness was pitiful at times. Pouting when he didn’t receive letters from friends back home, he complained to his commander that there must be something wrong with the military mail system. In fact, his friends had not written him.

Amid the trauma of war, however, his emotional focus began to widen. He showed an evolving sense of empathy toward others, first toward the colonial troops under his command as they died, undersupplied, in mud-and-blood-filled trenches, then toward the Virginia frontier settlers he was charged with defending. Families were kidnapped and scalped and butchered in Indian raids. Settlers came begging him to save them.

He often felt powerless to protect these people. Yet Washington was dogged and fearless and calm in the face of danger. He began to listen closely to his officers, carefully weighing their advice and moderating his impetuousness. Surviving numerous close calls in battle that left bullet holes through his clothing, he felt miraculously spared. He came to believe that “Providence” had a greater role for him.

After British forces finally dislodged the French, Washington emerged from the Ohio wilderness in late 1758 at age 26. He had recently written an impassioned letter to Sally Fairfax, who did not return the sentiment. Within a few weeks of his emergence he married the wealthy widow Martha Custis, settling down to the life of a prosperous planter and family man. Besides financial security, Martha probably offered him the intimate emotional reassurance that he had lacked during those years thrashing through the Ohio wilderness, trying to make a name. (We’ll never know for sure because she burned their correspondence.)

Almost two decades later, in the spring of 1775, Washington attended the Continental Congress in Philadelphia as a delegate for Virginia. Still tall and powerfully built at age 43, he wore a resplendent blue-and-buff uniform of his own design. He projected an aura of modesty, dignity, and strength. By then he had learned how to carry himself in the world, how to engender loyalty and trust, how to seize opportunity yet also care for others. In other words, he had learned how to lead.

The Continental Congress needed a commander for its new army to march against British troops in Boston. Washington possessed far more military experience than anyone in the room due to his role—checkered though it may have been—in the French and Indian War. John Adams rose to speak favorably of him. Washington was nominated. Delegates voted. It was unanimous. George Washington would be the first commander in chief of the Continental Army of the United Colonies. In so many ways, it was a destiny of his own making.