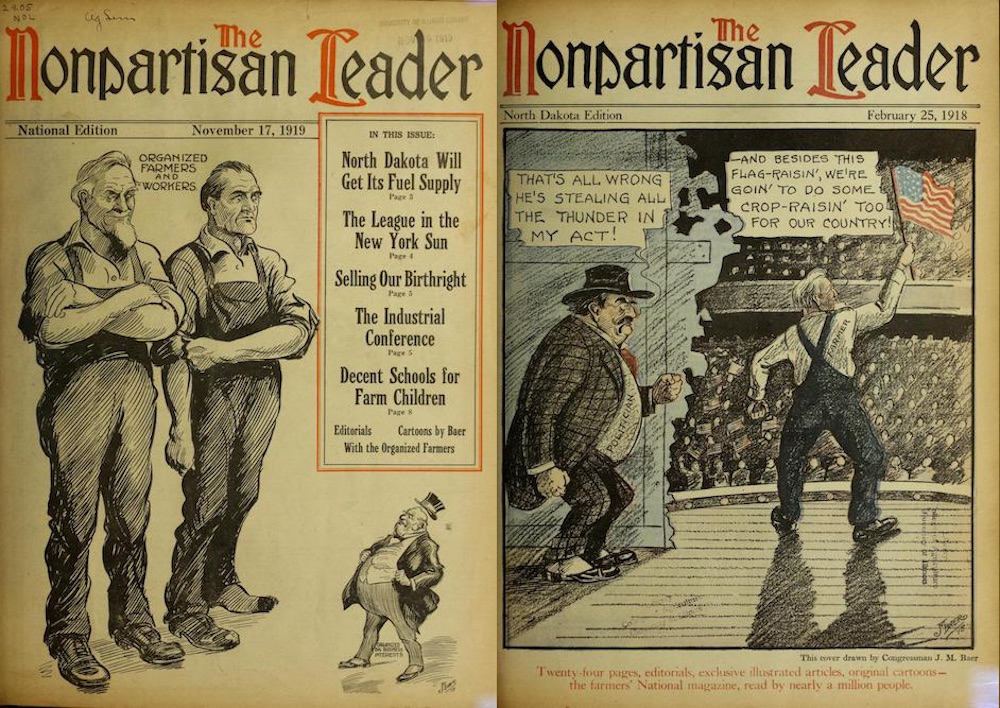 In a nation that envisions innovation as the domain of Silicon Valley start-ups, most dismiss North Dakota as flyover country. Yet the state’s history shows it deserves more credit as an innovator. A little more than 100 years ago, North Dakota’s farmers, challenged by economic hardship and indifferent politicians, invented a nonpartisan approach to elections that was as elegant and powerful as it was novel.

Today, Americans politics are partisan and polarized. But as a political movement made up of lower-middle-class farmers, the Nonpartisan League (NPL) took advantage of the direct primary—a new innovation at the time—to bypass entrenched politicians and parties.

During the early years of the 20th century, a broad impulse for popular government transformed election law—particularly primaries—in many northern and western states, but North Dakota took it further than some. Rejecting the notion that politics belonged only to professionals, citizens put themselves in the thick of things—replacing the mediating force of a political party with a self-organized polity. Parties, which had formerly controlled candidate selection, remained powerful, but voters could now challenge the establishment players who often used backroom deals and convention shenanigans to stay in power.

From the start, the movement backed anyone who supported farm-friendly economic policies, regardless of that candidate’s party affiliation. Later this alternative to politics-as-usual famously established state-run industries, but also—as a correspondent in The Nation noted in 1923—ensured that “a sentiment and point of view had been established in the minds of hundreds of thousands of farmers and ranchers.” By empowering regular citizens across the West and Midwest to see themselves and their society anew, it created a resurgence of “We the People” government that sits at the heart of the nation’s best democratic traditions.

North Dakota was especially ready for political reform because of its history. Established in 1889, it had an almost entirely agricultural economy, giving the outsiders who transported and processed the crops it grew outsized political influence. Talk of cronyism and the indirect control of state politics by Minneapolis-based companies defined life in the capital, Bismarck, from the start.

Agitators for change found a ready audience for basic political reforms, but few imagined that the state’s farmers could transcend their many differences to organize the way they did. The farmers were far from homogeneous, but included Icelanders, Czechs, Germans from Russia, Norwegians, Irish, Ukrainians, Swedes, Germans, Danes, Hungarians, native-born Americans, and a handful of African Americans. They were all settled on land that had been taken from Native Americans. In some rural districts, distinct congregations of Protestants and Roman Catholics and Jews jostled up against each other, while outside Ross, North Dakota, a small community of Syrians practiced Islam. In fact, census data show that North Dakota had the highest proportion of foreign-born residents of any state in the country before World War II.

Despite their differences, by the early 1910s, farmers across the vast wheat belt of western Minnesota, North Dakota, South Dakota, and eastern Montana all faced a common problem: the overwhelming economic clout of the Minneapolis-based flour millers and wheat traders who dominated agricultural commodities markets. Grain farmers who shipped their products to Minneapolis for processing—nearly all of them—saw little of the profit that their wheat ultimately produced. Crop prices, controlled by milling and transportation companies, were low. Transportation costs, set by railroad companies, were exorbitant. The combination left farmers cash-strapped. As the rest of rural America experienced an agricultural boom, failed mortgages and hard times defined farm life on the Northern Plains.

Abhorring electoral politics, which they saw as sullied by corruption and power, wheat farmers in North Dakota, Minnesota, South Dakota, and Montana responded to their economic plight by organizing themselves into cooperatives, attempting to build power without getting involved in politics. They hoped that cooperatives might create a more equitable marketplace, one in which farmers might hold even odds to support their families. Their Equity Cooperative Exchange brought smallholders together to create democratically-run, customer-owned grain elevators across the Northern Plains. Farmer-owners made sure that more of the profits from wheat stayed in farmers’ pockets.

But in the 1910s the Exchange, realizing local organizing had its limits, tried to expand its reach by establishing a large terminal grain elevator to compete with those run by large corporations. Minneapolis-based companies responded by refusing to permit the Equity Cooperative Exchange to trade in that city’s wheat market. So, in 1915, the group’s leaders turned their attention from economic cooperation to state-level politics. Public policy, however flawed, seemed to offer the only avenue for change.

In North Dakota—and soon thereafter, in other states—wheat farmers used the Equity Cooperative Exchange as the foundation for a new political organization: the Nonpartisan League. The NPL built on existing relationships to encourage farmers to prioritize shared economic self-interest over ethnic, cultural, and religious divides. It also pushed farmers directly into electoral politics. Members canvassed door-to-door to recruit, ensure turnout at political rallies, and create an audience for the NPL newspaper. During election seasons, NPL people held their own members-only precinct caucus meetings and identified citizen-candidates to run for office. They quickly began to see themselves as political actors.

Platform-oriented rather than candidate-based, the NPL endorsed farmers for state offices, and supported the creation of a state-owned bank, grain elevator, and flour mill. And seeing their concerns reflected in electoral politics ensured that North Dakotan farmers responded enthusiastically at the polls. In 1916, NPL candidates won the governor’s race, the contest for attorney general, and the majority of seats in North Dakota’s House of Representatives. By 1918, they held those state-wide offices and seized a majority of seats in the state Senate as well.

Finally empowered to make their platform real, the newly elected farmers moved quickly to sidestep the large millers and traders in Minneapolis. They established a state-run terminal grain elevator and matched it with a state-run flour mill, keeping more profits from processed wheat in North Dakota. Leaguers also created a state-owned bank that allowed local lenders to reject financing from out-of-state interests. After taking hold of North Dakota’s state government in 1918, the NPL spread to twelve other states in the West and Midwest, and two Canadian provinces.

Misunderstood—then and now—as socialists, the NPL farmers remained avowedly nonpartisan. They held no ideological commitment to big or small government. They just saw government as the means to represent and institute the people’s will, rather than the interests of the powerful. 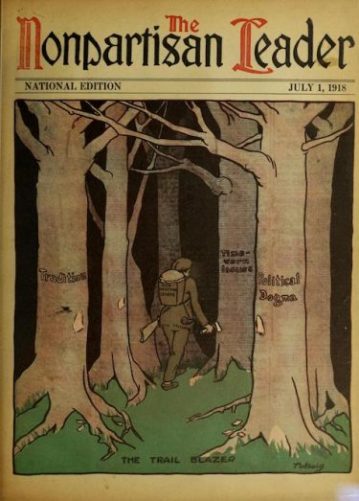 Too often belittled, this vision of citizens as more than just voters lies at the heart of a wide range of American movements for change—from 19th-century Grangers and Populists, to labor organizing in the 1930s, to the Black Freedom Movements of the 1950s and 1960s. It’s a tradition that encourages regular people to work across their differences to solve common problems.

In North Dakota, the NPL’s successes inspired broader change. Initially, for example, the group ignored farm women, who sought agency in their private and public lives, but its insistence on a participatory civic culture inspired women to organize NPL auxiliaries that engaged in fund-raising and civic education. One woman in Montana reported that “we are not going to talk about recipes for rhubarb conserve” but instead would discuss “the great battles for human rights so that we can vote straight when the time comes.”

After 1920, the women’s votes became more important than ever, as corporations in Minneapolis and established politicians began pushing back against the NPL, rightly seeing it as a threat.

Establishment foes attacked the League and its members at every turn, declaring it to be anti-war, and thus anti-patriotic—a serious charge after the U.S. entered World War I in 1917. Though many Leaguers opposed the potential for war-profiteering and heavy casualties, they consistently did their patriotic duty. Nonetheless, in Minnesota, South Dakota, Kansas, Montana, Nebraska, and Idaho, Leaguers remained suspect and faced direct challenges to their civil liberties. Local law enforcement denied the NPL the right to hold public meetings. Organizers were seized by mobs, tarred, and feathered.

In the meantime, in North Dakota, where the NPL-controlled statehouse ensured that local law enforcement would not engage in unconstitutional activities, autocratic League leaders made poor decisions that led to internal dissent. The head of the Nonpartisan League, a former farmer named Arthur Townley, alienated opponents and League members by proposing controversial business schemes that went beyond the organization’s stated aims. Put off by such behavior and new policies they saw as overreach, some NPL farmers turned against the movement—and as a result, in 1921, North Dakota held the nation’s first recall election. Many NPL officials, including the state’s citizen-farmer governor Lynn Frazier, lost their seats.

Never again would the League run the state. Yet its influence remained. A year after his recall, Frazier, still representing the NPL, was elected to the U.S. Senate. During the 1930s and 1940s, the Nonpartisan League persisted as a wing of the Republican Party. In 1956, it merged with North Dakota’s Democratic Party, still known today as the D-NPL. North Dakota’s state-owned bank, flour mill, and grain elevator continue to thrive. Soon marking their centennial, these institutions stand as a concrete testament to the Nonpartisan League and its lasting—and innovative—vision of nonpartisan, cooperatively organized, citizen-centered politics.