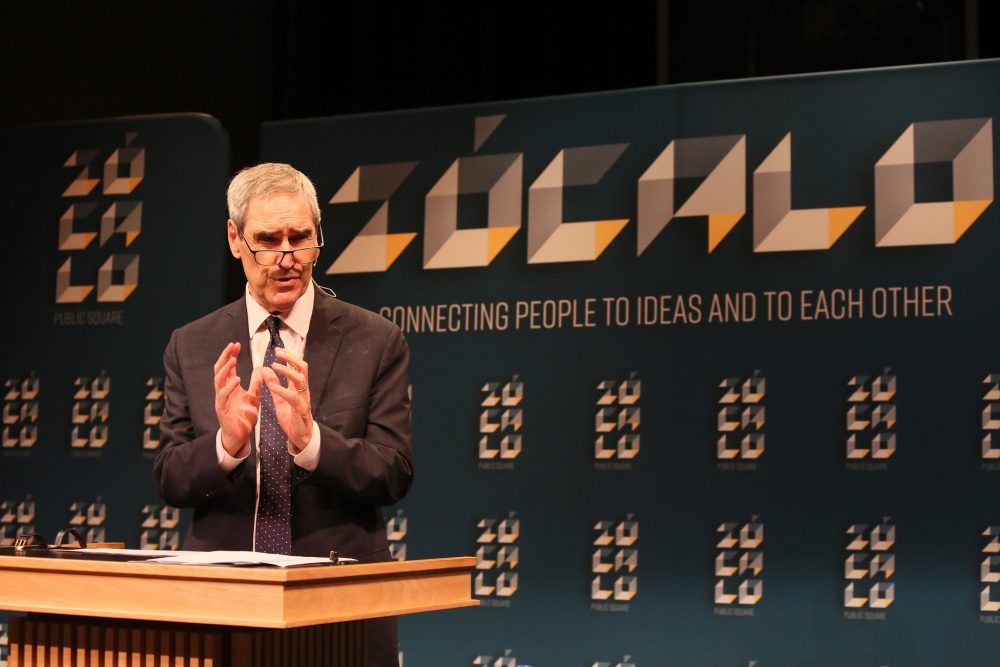 The Eighth Annual Zócalo Book Prize Award Ceremony began in Tucson, Arizona, traveled from Los Angeles to Pretoria, South Africa, and Rio de Janeiro, Brazil, and made stops in Hungary and Canada in a globe-trotting exploration of place, community, and the forces that connect us to one another.

The ceremony, which took place at the National Center for the Preservation of Democracy in downtown Los Angeles, began with Charles Jensen, winner of this year’s Zócalo Poetry Prize for the poem that best evokes a connection to place, reading his poem “Tucson,” about his former home in Arizona.

Then, Zócalo Founder, Editor-in-Chief, and Publisher Gregory Rodriguez presented the 2018 Zócalo Book Prize to Central European University rector and president Michael Ignatieff for his book The Ordinary Virtues: Moral Order in a Divided World. The Ordinary Virtues, explained Rodriguez, is the nonfiction book published last year that best enhances our understanding of community. Ignatieff is the eighth winner of the prize and joins a coterie of writers and thinkers that includes Sherry Turkle, Danielle Allen, Jonathan Haidt, and Richard Sennett.

As Ignatieff opened the Eighth Annual Zócalo Book Prize Lecture, “Are Ordinary Virtues More Powerful than Universal Values?”, he said he was nervous to be facing an audience of Angelenos, given that a chapter of The Ordinary Virtues is all about Los Angeles. “Everyone here knows more about L.A. than I do, which is a very foolish position to be in,” he said.

Writing The Ordinary Virtues took Ignatieff to cities around the world to study what he calls their “moral operating systems” that allow communities made up of diverse races, creeds, and classes to live together. These operating systems, he found, are based on “ordinary virtues” like trust, forbearance, and a “live and let live” attitude. “But we don’t celebrate the ordinary virtues enough,” he said.

What we do celebrate, and rightly so, Ignatieff said, are more abstract principles such as human rights and equality, which have been revolutionized since the end of World War II. The idea that “all individuals are equal,” Ignatieff said, “has been convulsively important in shaping our moral imagination since 1945.” Today, “when anybody speaks,” regardless of their economic or educational status or the color of their skin, “we are bound to listen and hear.” It’s a tremendous shift from the first half of the 20th century, the Canadian author said, when white people, including himself, believed that they were born to rule.

Today we want to believe, said Ignatieff, that “all the differences we have are secondary.” But in real life, individuals around the world “take people one at a time, you live and let live, and you take care of your own first,” said Ignatieff. From this “ordinary virtues perspective, difference is primary. That’s how moral life works.” The downside of this is that “We shut the door to strangers, we shut our hearts to strangers, we shut our hearts to what is different.”

You can see the conflict between human rights and ordinary virtues at play in contemporary debates over migration and immigration. In a universalist perspective on migration, refugees fleeing famine and economic and other misfortunes have rights, said Ignatieff. They are human beings with rights and claims, which “means that the citizens on the other side of the wall have responsibilities toward them.”

By contrast, an “ordinary virtues” perspective toward migration sees refugees as “strangers at the gate,” and it is up to the citizens within the community to decide whether to let them in. The citizens are not obligated to take migrants in but can give them the “gift” of letting them in. This, said Ignatieff, the former leader of the Liberal Party of Canada, is what sustains generous refugee policies in his home country.

Ordinary virtues confer many benefits on communities and societies. But, at present, authoritarian populists are exploiting these virtues, by seizing on them in order to reject human rights and close borders. “You take things that are good,” said Ignatieff, like loyalty and patriotism, and “you end up building walls.” He added, “I’m seeing it in Hungary. Look out, watch out, folks, this is coming to a theater near you. A preference for your own is turned into exclusion.”

What can we do about it? “We need to strengthen both ordinary virtues and universal values,” said Ignatieff. “The issue is how we balance the preference we ought to accord to citizens with the obligations we ought to have to strangers.” He admitted that he has “no magic answers,” but he found in his travels that a few things held true in strong communities. He noted that he found community in Los Angeles at places like churches, mosques, and synagogues sustained by good leaders and people’s desire to connect. “Building from the bottom made me feel optimistic,” he said.

“But the other conclusion I drew was that local communities can’t do it on their own,” Ignatieff said. Los Angeles’ moral operating system failed in 1965 and 1992 due to bad policing, he said, leading to massive civil unrest in Watts and, 27 years later, across large swathes of the city. “All bets are off in this or any society if communities of race or color feel that the cops are not fair, that justice is racialized,” said Ignatieff. “It’s the one piece of damage that can just blow the moral operating system of a city apart.”

You also need to have democracy at the national level, he said. America is “the country that married nationalism and internationalism” under both Franklin D. Roosevelt and Ronald Reagan, said Ignatieff. “This is not a partisan political plea.” Rather, it is a fundamental truth this nation must return to. “The genius of America combines a deep commitment to others with universal values,” he concluded.

The audience question-and-answer session pushed Ignatieff to talk more about solutions to our current political and cultural impasses.

If politicians have “bastardized ordinary virtues and abandoned universal values,” said one audience member, “how do we get back to those ideas and protect them at the same time?”

“It depends tremendously on politics,” said Ignatieff, noting that he didn’t have an easy answer. “I’ve tried to frame it in a way you might not have heard before.” One key is to “get away from thinking anyone who disagrees with us is a racist,” and to understand instead “how virtues get curdled and turned into hatred.”

Another audience member asked, “Do you think the universal values are our final goal?” And if so, are ordinary virtues simply a bridge to get to universality that we can later abandon?

“I’m trying to argue against the idea that ordinary virtues are transitional,” said Ignatieff. We’ve been living with globalization for decades now, and we remain stubbornly attached to our own people. “We’re living with a permanent conflict between the universal and the groups we belong to, and we struggle with that all the time,” he said. “That’s not going away any time soon.”

Perhaps, suggested another audience member, human rights is just too abstract for us to understand. Human rights don’t play a role in most people’s moral decision making, Ignatieff replied—and he has spent many years teaching human rights. “No one reasons like Immanuel Kant when they’re in a tight place,” he said. Human rights “makes a presumption about human rights I don’t think is sociologically true. You’re always dealing with the person in front of you.” That person belongs to a certain gender, a certain race, comes from a particular place. We find the common ground of our shared humanity much later in the story. 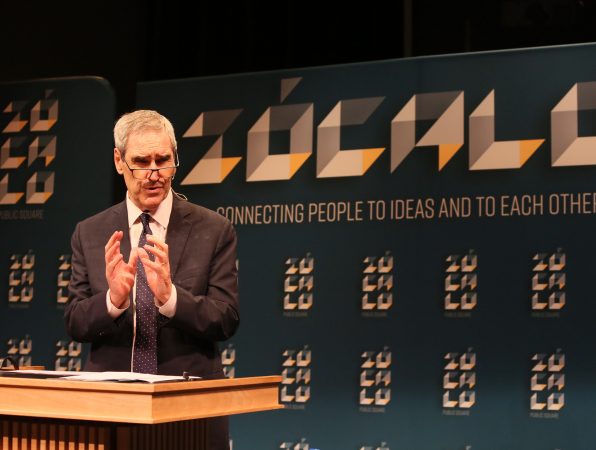 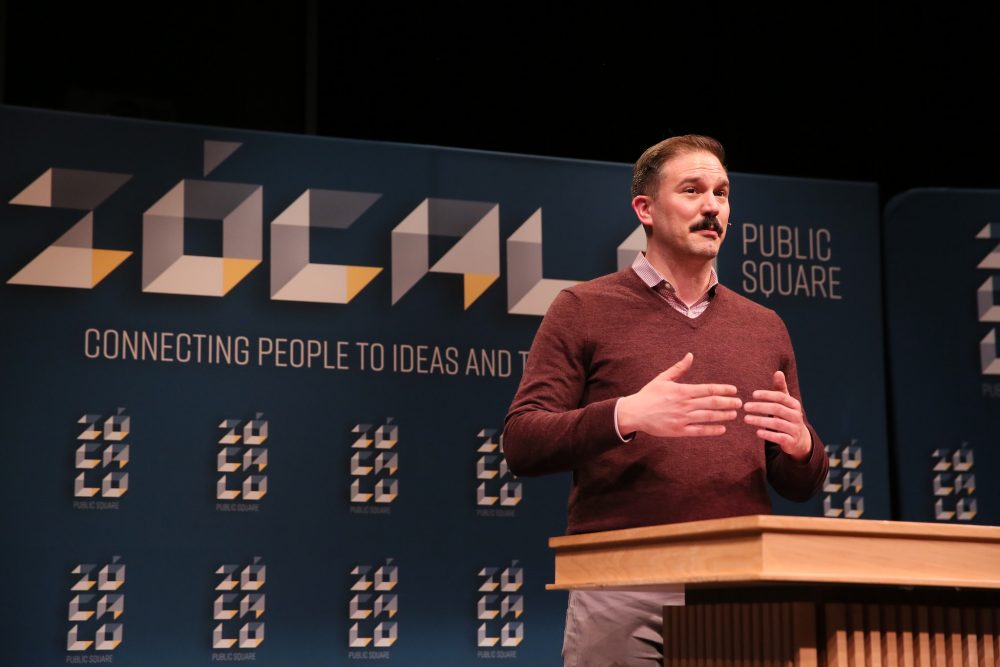 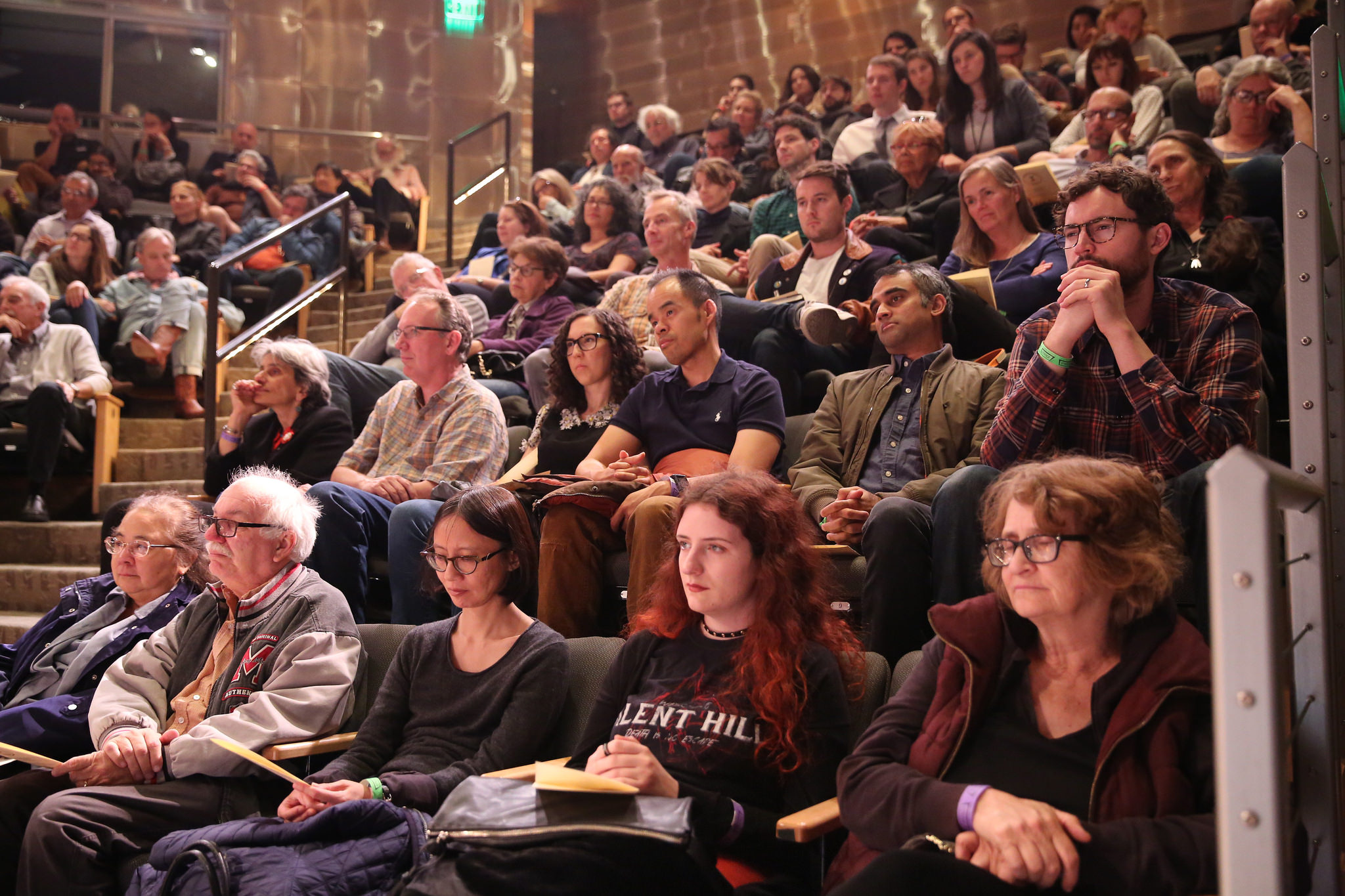 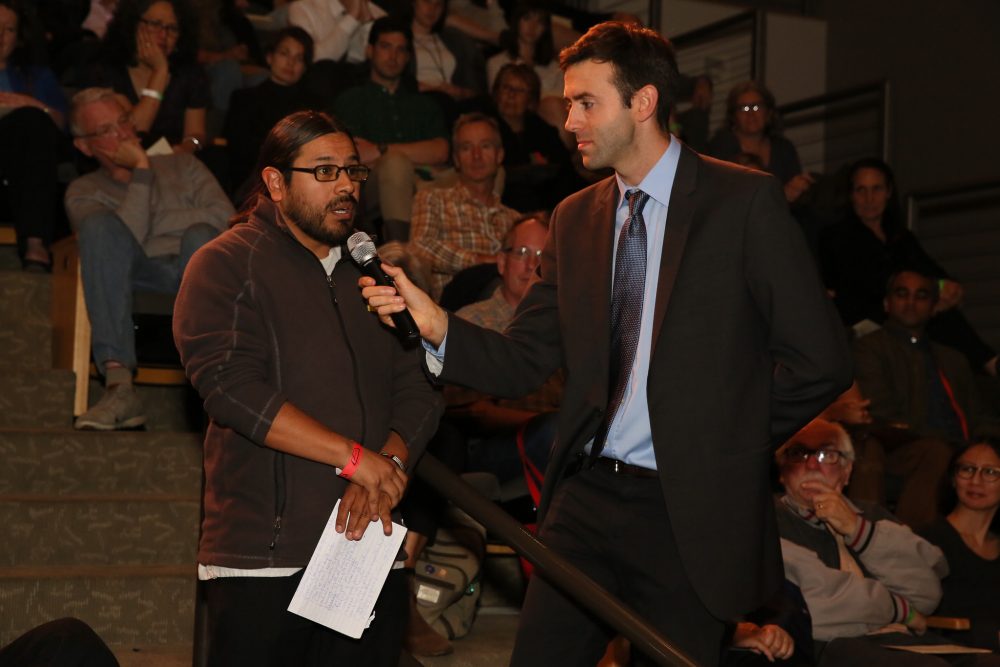 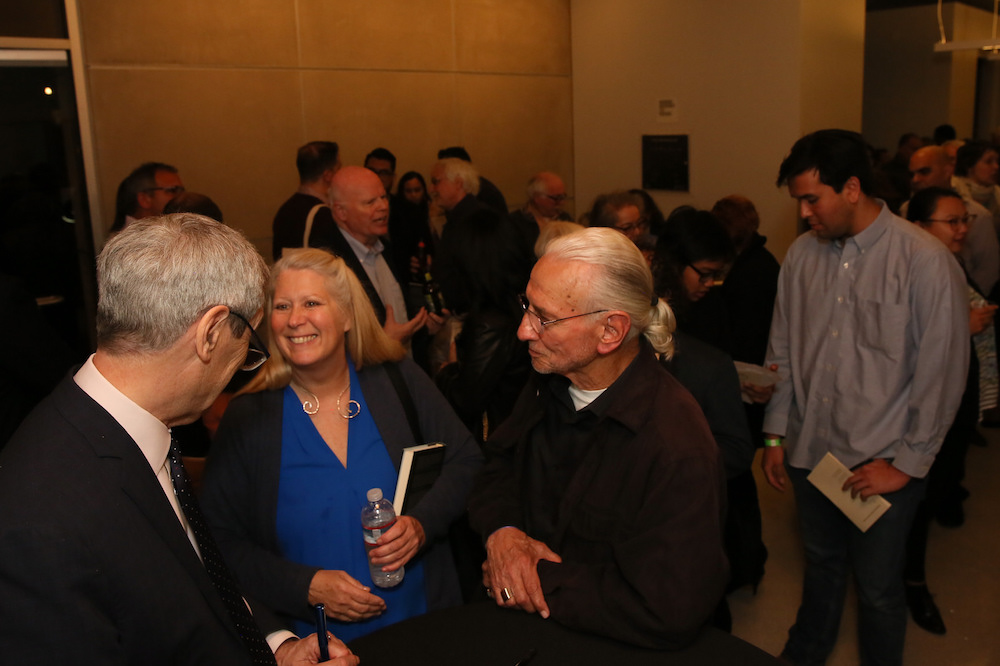 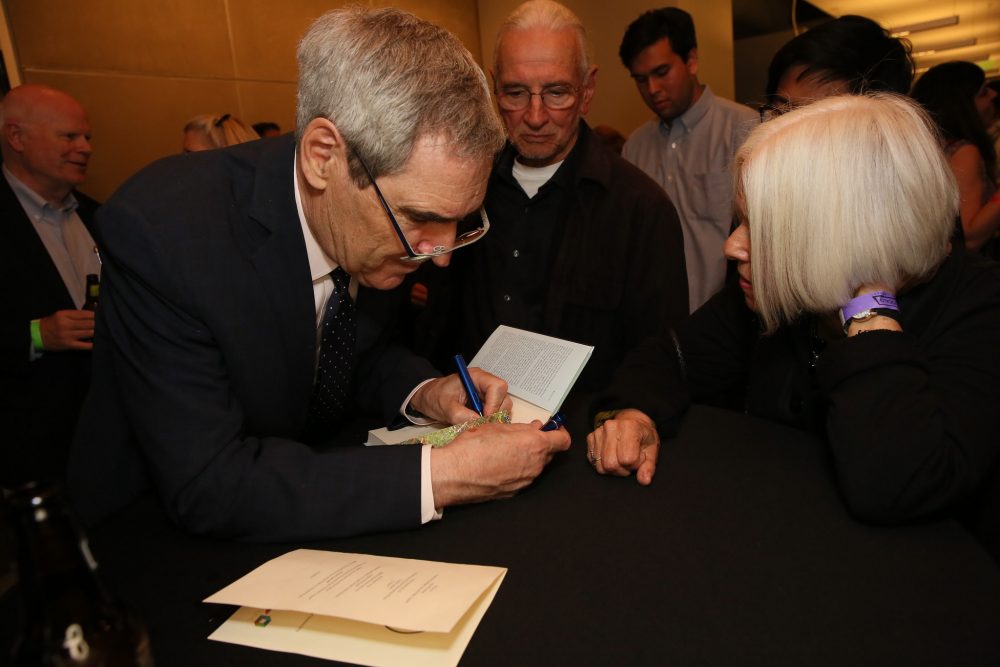 Michael Ignatieff, author of The Ordinary Virtues: Moral Order in a Divided World, speaks with guests at the reception.