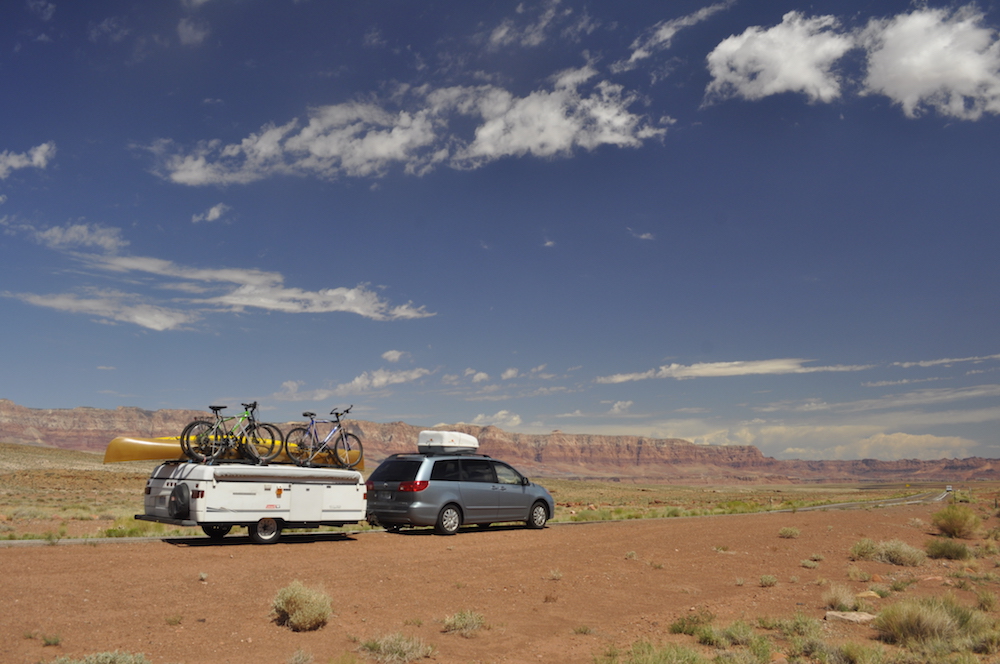 Last August, my sons and I paddled canoes through the Missouri River Breaks National Monument in eastern Montana. The Breaks is remote country, a prairie river cutting through coulees and badlands, relatively unchanged since Lewis and Clark passed through more than 200 years ago.

For three days, we encountered no one. Rattlesnakes slipped across the trails. A dust storm whooshed into camp one night and seasoned the spaghetti with grit. We glided past badgers, bighorn sheep, prairie dog towns, bald eagles, and abandoned homesteads.

Years earlier before the boys were born, I had floated the 110-mile stretch but wanted to return when they were prepared for primitive camping and could appreciate the austere landscape and its human history.

Afterward, we drove to the railroad in Glasgow, met the Amtrak carrying their mother, and headed south to Wyoming to witness the total solar eclipse—an event anticipated for years, partly because it occurred on our youngest son’s 18th birthday.

It was a remarkable trip—how often does one see the sun blotted out at midday?—but not entirely unusual. The boys have been on such journeys since they were toddlers, seeing iconic landmarks and natural marvels and camping on the vast public lands of the United States.

A parent never knows what sinks in with children, but as we drove home to Michigan—where the boys attend college—they reminisced about previous adventures.

In Oregon’s high desert, we once saw lightning stampede a herd of cattle. At Hoover Dam, border patrol agents rummaged the overhead luggage carrier looking for smuggled aliens. In the Tall Grass Prairie Preserve in Oklahoma, we scrambled through head-high grasses and conjured the Great Plains hundreds of years ago.

Camping on the edge of Albuquerque, we heard odd hissing sounds and voices from above and stepped from the tent to see the sky jam-packed with hot air balloons. Once a herd of bison invaded our campground along the river bottom at Theodore Roosevelt National Park and the rutting males—the size of Mini Coopers—slammed into one another and threw themselves down into dust wallows. The day before, we had puzzled over those odd grassless depressions a few feet from the picnic table. Now we knew what they were, and kept a watchful eye while eating breakfast cereal.

A third of the United States is held in common by all Americans. It belongs to you and everyone else, I explained.

There were priceless moments. I bought tickets to a paleontology museum in Montana, not realizing it was run by creationists and showcased illogical dioramas. “Look Dad, a caveman is spearing a dinosaur.” In Las Vegas, an Elvis impersonator paraded into a crosswalk wearing a sandwich board advertising: Colon Cleansing. “Dad, what’s a colon cleaning?” On an overlook at Mt. Shasta, one son yanked my shirtsleeve. “Hey, remember that SpongeBob episode when Squidward….” I reminded him, “Remember, let’s be in the moment.” In the gift store at Mount Rushmore, the boys bought cheap jackknives from a display of personalized trinkets. One son regarded his name on the handle and asked, “But how did they know I was coming?”

Because I’m a teacher, summers were free to be with the boys. Mom hustled off to the office while we shuttled between science camps, baseball, and soccer practices, fishing lakes and the beach. We erected a treehouse, painted basketball lines on the driveway, and glued together model rockets. My kitchen window framed a neighborhood of children swarming our trampoline, rope swing, and playset. The gang rifled the refrigerator for snacks, plopped down for cartoons, and fought over Gameboys.

By late July, routine infested us all.

Tired of policing electronics and playing counselor, I stowed camping gear in the minivan and set off for a month. Mom, with stingier vacation time, met us along the way.

A few times, I drove to the East Coast or south to Texas but usually pointed toward the empty spaces of the West. We crossed the Great Plains where the sky expanded like the inside of a blue balloon, and rolled bales of hay resembling oversized biscuits of shredded wheat scattered on the prairie. Thunderstorms edged the horizons and dropped a curtain of purple rain. We shunned the interstates mobbed by vacationers like us, elderly retirees piloting RVs as big as tour buses, and convoys of Harley motorcyclists roaring their way to Sturgis. We scooped up brochures and roadmaps in rest areas and meandered the state highways. Plans were indeterminate. Occasionally we hit the big national parks—Yellowstone/Grand Teton, Glacier, and Grand Canyon—but mostly explored quieter regions—the Arizona strip, Washington’s scablands, the Niobrara Valley in Nebraska, the Mojave Preserve and anyplace West Texas.

I made peanut butter and jelly sandwiches in community parks, looked for playgrounds, and stopped for ice cream in little burgs. We overnighted in RV parks. The boys tore around on bikes, brought new friends back to the campfire, and splashed in the pool. I fished a cold one from the cooler, made mac and cheese, and kept watch with the other parents.

A third of the United States is held in common by all Americans. It belongs to you and everyone else, I explained. I wanted my sons to experience the country’s sheer size and diversity, grasp its opportunities, and understand its injustices, too. We passed migrant pickers working lettuce fields in the Salinas Valley, gazed down on homeless encampments from highway overpasses, waved to hobos riding freight trains, and wandered through border towns on the Rio Grande. Travel is the great educator, the cure for provincialism and obliviousness. 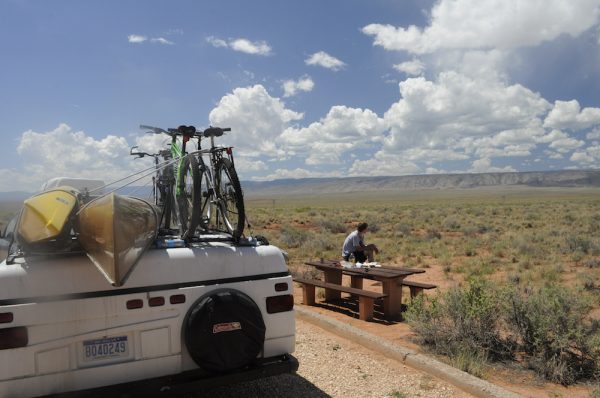 And I tried to make sense of it all—expounding on Manifest Destiny, natural history, weather in tornado alley, ranching, No. 2 field corn, 19th-century Indian genocide, western water policy, bird migration, the Dust Bowl, and tidbits gleaned from a liberal arts education and a lifetime of reading and curiosity. There was family lore to pass on, too—anecdotes about growing up, meeting their mother, and the grandparents they never knew. We had the time and inclination for discourse.

Unquestionably, my verboseness and the pedagogy grew tiresome. “Please don’t stop at any more roadside historical markers,” and, “Dad, you read everything,” and, “We heard that story before.” Eventually we’d detour to an airport and pick up my wife. “Yay, Mom’s here, now.” We stopped at amusement and water parks, took excursion train rides, and tubed in rivers.

Today, the kitchen window holds the souvenirs—a fist-sized piece of granite blasted off the Crazy Horse Memorial, a miniature Empire State Building, a preserved fish skeleton from Fossil Butte National Monument. The boys are young men now holding summer jobs and college classes and social lives. More trips may lie ahead but it won’t be the same.

They’ll have favorites memories and I have mine.

One August in Arizona while the kids wrestled in the tent, I perused the Flagstaff newspaper under the light of the Coleman lantern. That night, I read, would be peak viewing of the Perseid meteor shower when Earth annually sweeps through dusty debris left by a passing comet.

About 3 a.m., I shook the boys awake. “There are shooting stars out. Lots of them.”

We held hands and walked away from camp and into the dark desert of the Colorado Plateau. Coyotes yipped from the sagebrush and semi-trucks whined out on Interstate 10. Streaks of cosmic dust—no larger than grains of sand—arced and vaporized in the friction of the atmosphere.

The next day we drove over to Meteor Crater and stood on the lip of a mile-wide, 600-foot deep hole blasted out 50,000 years ago by a meteorite just 50 yards across but moving 20 times the speed of a bullet.

There could be no better science lesson.