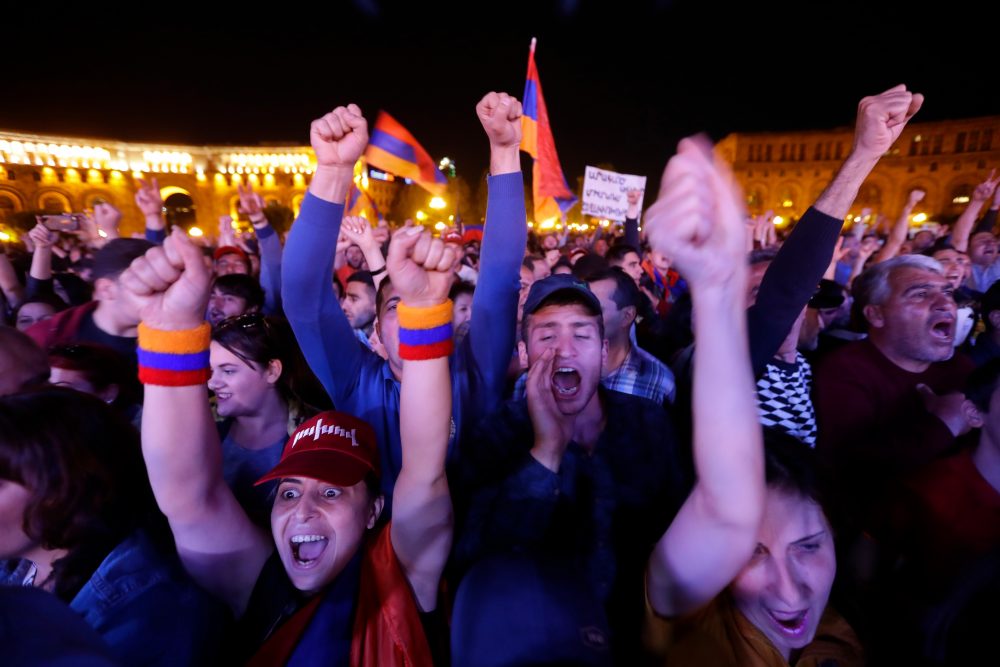 In February, if you’d asked me whether Armenia would have a democratic revolution this spring, I would have said no. So would have everyone I know. So what explains this transformation in my country, Armenia?

There are never any easy answers in this ancient country, long plagued by poverty, war, misrule, and earthquakes. But what I’ve seen since April here convinces me that it is impossible to know when a giant change will come, even when you are right in the middle of it.

It was during the first week of April that Armenia’s opposition party, which had never had a real shot at power, began a civil disobedience campaign. It launched this effort with a cross-country march, led by opposition leader Nikol Pashinyan. Starting with fewer than 10 people, the march grew to 300,000 as it covered more than 500 kilometers of the country from north to south. The marchers didn’t demand a specific political outcome but rather espoused the ideals of love, tolerance, and dignity.

These ideas fired the imagination, and soon people were in the streets all over the country, offering similar messages. These demonstrators were mostly young and educated, and within a few weeks, it was a national movement headed by Pashinyan, who is a member of parliament from the YELQ (Way Out) opposition party. On many days—whenever I could spare the time from my job as a software developer at a small IT company—I was among them. I once even walked 11 miles to join a protest.

By the end of April, this movement had forced the resignation of the president of 10 years, Serzh Sargsyan, who only days earlier had sought to extend his rule by taking over the newly empowered office of prime minister. By the second week of May, Pashinyan was being sworn in as interim prime minister, with the support of the previous ruling party.

To say that this moment feels different than any we have known before is an understatement. In only a few weeks, Armenia has embarked on what is not just a transition of power but also a wholesale rearrangement of the country and a break with its history. Indeed, this is a revolution of the idea of Armenia itself. And for the first time, Armenians feel that our destiny may be in our hands.

Armenia, for so much of its history, has been a target of conquerors, its people ruled by outside tyrants and empires. In the last century alone, Armenians have faced historical hardships: the Genocide of 1915 at the hands of the Turks; the loss of sovereignty to the Bolsheviks in 1920; the conversion of Armenia into a republic of the Soviet Union. In 1990, we celebrated our regained independence only briefly, as that event was soon followed by economic troubles and by conflict with Azerbaijan over independence for the territory of Nagorno-Karabakh.

Since independence, the Armenian government has been corrupt and incompetent, as successively less educated and more criminal people ended up in government positions, from which they could enrich themselves. Election irregularities became regular. This class seemed to believe that Armenians would stoically suffer as they previously had. Many regular Armenians believed this, too.

But the younger generation of Armenians—people in their twenties, including me—surprised them. In fact, we surprised ourselves. In retrospect, we didn’t know each other. If you complained while working in a job like a teacher or university researcher, you risked losing your job. The economy’s pyramid structure discouraged dialogue. So many of us didn’t know just how disenchanted our generational cohorts had become—until the protests began, and the frustration became visible to all of us.

Ours is an especially large generation: People age 20 to 30 represent 570,000 out of the country’s total official population of about 3 million—the product of a baby boom after the war with Azerbaijan. While we weren’t entirely free, our youth after 1990 was relatively open. We used the internet; we traveled; we sought education and worked outside the country. Many of us—including me, whose job involves work with companies in the United States, Canada, and Sweden—took advantage of this, and learned firsthand that opportunity in Armenia didn’t have to be so limited. We saw that the country was growing far too slowly, and that its political system was not keeping up with Europe.

And while our schools could use improvement, our generation of Armenians did benefit from the country’s determination, after independence, to preserve its culture and teach more of its own history. We were well aware of the 1915 genocide. We studied legendary Armenians who made internationally recognized contributions to science, culture, arts, and literature, including Tigranes the Great, the poet-theologian Narekatsi, the medieval theologian David Anhaght, the mathematician and astronomer Anania Shirakatsi, the composers Komitas and Aram Khachaturyan, the painter Ivan Ayvazovski, and the diving champion David Hambardzumyan. Knowing our history has made younger Armenians less willing to compromise with bad leadership.

Still, it took a significant amount of organization to turn these feelings into a revolution. The opposition organized carefully, with a disciplined message. We were handed paper with the points we should make. Our goal was to be relentlessly positive and open, while insisting that a better future was possible. The people blocked traffic and access to government ministries, with lines of people, and even put their bodies beneath police cars to prevent protestors from being arrested and taken away. We were told to avoid violence and resist provocation and we conducted ourselves in a way that was both professional and beautiful. This approach was irresistible, and Armenians of all ages and backgrounds joined in.

Mothers were in the streets with infants. Well-known actors performed for the crowd. Kids organized in the public parks so they could protest while still holding their lessons and doing homework; teachers joined them. The protests included street classes on history, design, art, painting, math, music and computer programming.

The most striking characteristic of the protests was the kindness that poured into the streets and squares, as people smiled and greeted strangers.

In this conservative place it was striking to see girls hugging policemen, many of whom had been trained as exclusively punitive personnel, according to the old Soviet standards and mentality.

One potential confrontation I witnessed was defused by protestors chanting, “The policeman is one of us.” The police and protestors talked frequently. On one street, where the authorities had erected a wall to keep demonstrators away from the prime minister’s office, some police officers abandoned their posts and joined us.

During the days of protests, with as many as 350,000 people gathering in public areas (parks, squares, or streets and avenues), there was not one report of a storefront, a public bench, or a single bush being destroyed.

There were three turning points in this drama. The first came one evening in late April when the former president officially resigned. He previously had used a referendum to install himself in a newly powerful prime minister’s post. His resignation brought what seemed like the entire population out to celebrate in the capital, Yerevan. But not only there. I live seven kilometers from Yerevan, but my job and all my business contacts are in Yerevan, so I was on the scene, too. The former prime minister didn’t appear live, but simply issued a statement. As the word spread, we celebrated. I remember feeling grateful that he had done the right thing, instead of sending out the police to go and stop people.

In only a few weeks, Armenia has embarked on what is not just a transition of power but also a wholesale rearrangement of the country and a break with its history.

The protests and celebrations also took place in all provincial towns and villages. But as soon as the celebrations were over, professional unions, social networks, and other organizations raised the issue of the need to clean the central squares after the gathering. The next morning people going to work were astonished to find the squares had been cleaned—mostly by young people during the early morning hours.

The second turning point was the puzzled reactions of authorities, including the police, who sought to crack down on the protests but were unequipped to deal with people confronting them unarmed with smiles, laughter, dancing, and singing. Because the police could not spot an actual enemy in the crowds, they were unable to provoke a reaction that would justify a crackdown—their usual response.

A third turning point came with the last gasp of the ruling party. In an extraordinary session of the National Assembly, the ruling party backed the discredited government and refused to agree to install Pashinyan, the opposition and movement leader, as prime minister. This desperate attempt to maintain power was the end of the ruling party—it doubled and tripled the number of people in the streets.

Soon after, the ruling party reversed itself and surrendered, declaring that it would not propose its own candidate, and would instead embrace the candidate proposed by the parties in the opposition coalition.

By that time, the movement had adopted a new slogan, which translates roughly as “Take Your Own Step.” It was a way of saying that today’s Armenians, after having been told their country was too weak to make its own rules, would now take charge of our own destiny.

The opposition says it will be peaceful, that it will champion public participation, and restart dialogue with its neighbors and international organizations. The new government says it will be democratic, with the citizens of the movement acting as the overseer of government and democratic processes.

Holding onto this revolution will not be easy. The new prime minister inherits a devastated economy, corruption, poverty and emigration, monopolistic political and economic systems, and heavy foreign debt. Developing the country will require hard work not just by the prime minister, but by all of us. The good news: Armenia is now a place of unprecedented inspiration and hope. We are, quite suddenly, a country with new possibilities and high expectations.