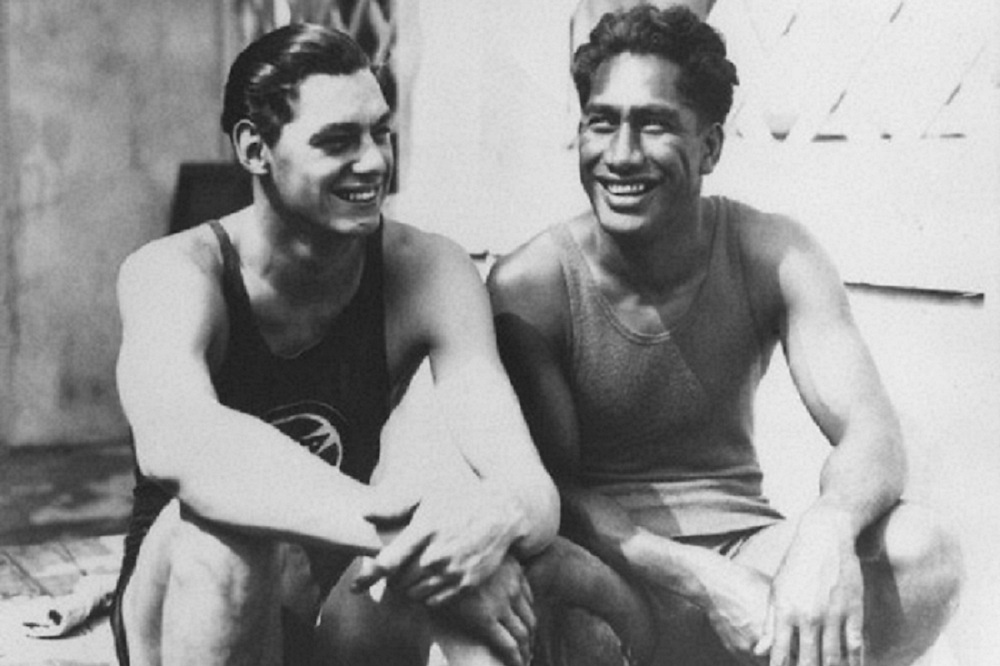 On the morning of June 14, 1925, Duke Kahanamoku was camping out on the beach in the seaside village of Corona del Mar, about 50 miles south of Los Angeles, getting ready to do some surfing with friends, when he noticed a fishing boat named The Thelma heading out to sea.

Kahanamoku was at a crossroads in his life. He was about to turn 35 years old and his days of winning Olympic gold medals for swimming were over. He’d moved to Southern California to become a movie star, but instead had only landed roles as an extra, playing Moor pirates, Indian chiefs, and South Seas tribesmen.

It was a sobering comedown for an extraordinary athlete who, while less remembered today, was considered to be both the Michael Phelps and the Jackie Robinson of his era.

His American journey, a story well known in the early 20th century, had begun with his birth in Honolulu in 1890, when Hawai‘i was a sovereign nation under Queen Lili’uokalani. Then, after pro-U.S. forces overthrew the monarchy, the United States annexed the kingdom of Hawai‘i. This ruthless (and illegal) display of imperialism, made him, at age 10, an American citizen and changed the direction of his life.

When he displayed extraordinary speed in the water, the white powerbrokers who controlled Hawai‘i championed the cause of this high-school dropout. In 1912, they helped raise the necessary funds to send Duke to the mainland to try out for the U.S. Olympic team. Their motivation, in no small part, was to use him to showcase Hawai‘i’s splendors to the outside world.

In 1912, few Americans besides Jack London and Mark Twain had journeyed across the Pacific to visit Hawai‘i. Fewer still had ever encountered a full-blooded Native Hawai‘ian like Kahanamoku. Years before the likes of Joe Louis, Jesse Owens, and Jackie Robinson tested their skills against white opponents, the dark-skinned Kahanamoku integrated swimming pools and beaches that were reserved for whites, broke records that earned the respect of his opponents, and impressed audiences and journalists with his gracious spirit. He also quietly endured racial prejudice: He was refused service at restaurants and hotels on the mainland because of his skin color.

Kahanamoku captured the gold medal in the 100-meter freestyle at the 1912 Stockholm Olympics and, along with Native American track and field star Jim Thorpe, returned home a national hero. Duke repeated his triumph at the 1920 Antwerp Olympics, then took the silver medal at the 1924 Paris Olympics (behind Johnny Weissmuller) at the ripe old age of 33.

His enthusiasm for promoting Hawai‘i earned him the nickname “Ambassador of Aloha.” He did so in a variety of ways, including demonstrating his skill at surf-riding, as the ancient pastime of Hawai‘ian royalty was called. Whenever he traveled to compete in swim meets—to Australia, to California, to New Jersey, to France—he’d take the time to fashion a board from wood planks, make for the ocean, and “walk on water” before spellbound audiences and newspaper reporters. He was surfing’s Johnny Appleseed, spreading the gospel of the waves on redwood boards that weighed as much as 125 pounds.

Kahanamoku wasn’t the first to surf in Southern California, but his presence sparked the first boomlet in the region. When he settled there in the mid-1920s, he checked out every locale from Malibu to San Diego. That’s how he and a few pals from the Los Angeles Athletic Club happened to drive down the coast to Corona del Mar in June of 1925: The word was out that the south-facing beach got killer waves.

Suddenly and violently, their plans for a relaxed weekend of surfing were interrupted. At Corona del Mar, Kahanamoku watched as a massive groundswell from the fierce Pacific nearly upended the 40-foot, five-ton fishing boat named The Thelma. As the boat struggled to right itself, a green wall of water crashed over the bow and destroyed the rigging and the mast. The Thelma capsized, and a dozen passengers were swept into the not-so-Pacific Ocean like bowling pins.

Kahanamoku didn’t hesitate. Grabbing his enormous wooden surfboard, he plunged into the sea and paddled furiously into the deep. He managed to corral one panic-stricken man and wrestle him onto the board, then another, then a third. Torrents of briny water cascaded over them as Kahanamoku propelled them to safety with urgent, powerful kicks.

He deposited the would-be victims with his companions, inhaled mightily, and again dove into the turbulent ocean. He secured two flailing fishermen, maneuvered them onto his board, and brought them back to shore alive. And then, for a third time, he headed toward the stricken boat. He picked up stragglers and placed them on his board until, finally, he could do no more.

Five men perished that day. Eleven were saved, eight of them because of Kahanamoku’s actions. He and his friends were honored for their bravery and praised in newspaper columns. “The Duke’s performance was the most superhuman rescue act and the finest display of surfboard riding that has ever been seen in the world,” Newport Beach police chief J.A. Porter told the Los Angeles Times.

When Kahanamoku was asked how he’d managed to save so many lives, he replied with typical modesty. “I do not know,” he said. “It was done. That is the main thing. By a few tricks, perhaps.”

These heroics did little to boost his acting career: He was unable to overcome Hollywood’s ingrained racism and the studios’ refusal to cast a non-white actor in a leading role. He officially retired from competitive swimming after the 1932 Los Angeles Olympics and returned to live in Hawai‘i. He followed his father into law enforcement and was elected sheriff of Honolulu, a post he held for nearly 30 years.

He became part of Hawai‘i’s entrenched Establishment: He joined the Republican Party and the exclusive Outrigger Canoe Club. He married Nadine Alexander, a haole woman much younger than him, and the couple moved into a tony neighborhood overlooking the Pacific. His deep affinity with the waters in and around Waikiki endured. The waterman “got wet” every day, either paddling, rowing, sailing, surfing, fishing, or swimming. 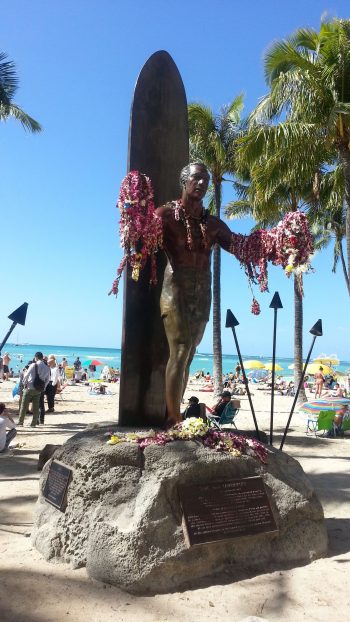 He was eating breakfast at the Outrigger on the morning of December 7, 1941, when Japanese forces attacked nearby Pearl Harbor. As Sheriff, with charge of the coroner’s office, Kahanamoku was witness to the devastating loss of life. Hawai‘i was put under martial law during the war years while serving as a crucial strategic post for U.S. forces in the Pacific. He worked closely with the Office of Civilian Defense, helping to coordinate emergency and medical services for residents in Honolulu. Later, he was named as the defendant in Duncan v. Kahanamoku, a landmark case about the limits of martial law that was eventually decided by the U.S. Supreme Court.

After the war, as aerospace innovations and greater prosperity fed a tourist boom, Duke—as he was known—advocated for statehood for his homeland. Hawai‘i joined the United States in 1959.

And, in 1957, he was fêted on the TV show “This Is Your Life.” He was shocked when several of the men whose lives he saved in Corona del Mar came onstage to thank him personally. “I have waited 32 years to thank you tonight,” Harry Ohlin said to the silver-haired Duke.

The final decade of Kahanamoku’s life featured yet another boom, one that few could have predicted. Thanks to the popularity of Gidget (the book and the movie), and the manufacturing of lighter and cheaper foam boards, surfing became wildly popular. Duke’s exalted status as surfing’s Babe Ruth turned his name into a brand. He peddled Hawai‘ian shirts, floral sneakers, and skateboards. His eponymous nightclub in Waikiki made an icon out of entertainer Don Ho. The Duke Kahanamoku Invitational was one of surfing’s first serious and prestigious competitions, complete with prize money and trophies.

Kahanamoku passed away in 1968 at the age of 77. At his request, his ashes were taken out into the Pacific in an outrigger canoe and deposited into the turquoise waters that were his everlasting love.

Today, Duke Kahanamoku is a member of the International Swimming Hall of Fame and the International Surfing Hall of Fame. Surfer Magazine crowned him the “Surfer of the Century” in 1999, and the U.S. Postage Service issued a stamp bearing his name and likeness in 2002. In a 2014 exhibition, the National Portrait Gallery in Washington, D.C., declared him to be among the 100 “coolest” American icons.

That he was “cool” before the term was even coined shows the breadth of a life that spanned the modern arc of his beloved homeland: from monarchy to U.S. Territory; from Pearl Harbor to statehood; from Don Ho to “Hawaii Five-O;” from pristine tropical islands to tourist mecca. His legacy looms as large as the gigantic bronze statue of him that stands sentry on Waikiki Beach: He was the first Olympic star to emerge from the Pacific Rim, and was one of the finest, if most unsung, multi-sport athletes of all time.

Wearing his trademark Hawai‘ian shirt, always at the ready for another game of beach volleyball, Kahanamoku was perhaps the first citizen of a new and globalized age that prioritized the pursuit of leisure and championed the environment.

And he would surely take great satisfaction in knowing that surfing will be an official medal sport with its entrée at the 2020 Tokyo Olympics.