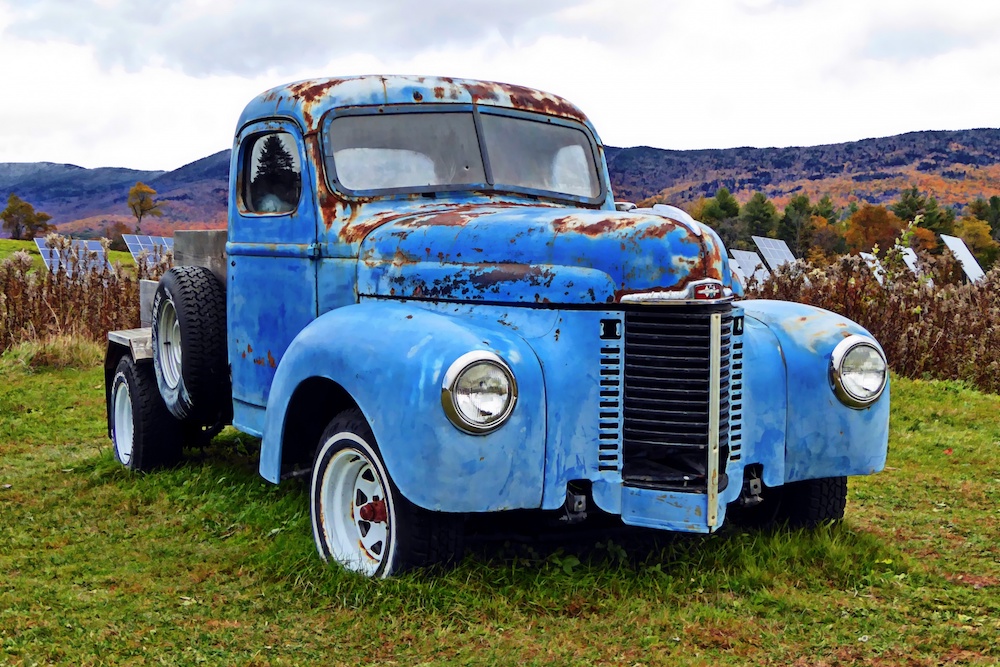 The pickup truck’s rise from its crude, makeshift origins to the almost luxury-item status it enjoys today amounts to a Horatio Alger tale with a technological twist, providing a striking allegory of cherished national legends of progress and upward mobility.

In the early 20th century, a number of Americans, seeking a more expeditious means of hauling material that could not be crammed into or strapped atop the traditional motorcar, took their tinsnips to the family flivver, affixing a large box or old wagon bed to the rear of the chassis. The frenzy of vehicular DIY-ing soon encouraged smaller entrepreneurs to install cabs and hauling containers on the slightly modified chassis of the Ford Model T.

But the Ford Motor Company itself did not offer the first fully factory-assembled pickup truck until 1924-1925 with its “Model T Runabout with Pickup Body” and 20 horsepower engine. Chevrolet and Dodge made serious moves into pickup production in the 1930s, and once the wartime production restrictions of the 1940s were lifted, the competitive scramble to cash in on pent-up demand led to a steady progression of bigger, more powerful trucks, which by the 1950s and early ’60s boasted V-6 and V-8 engines supplying 100 horsepower, improved transmissions, and easier steering.

By that point the pickup was no longer simply an adjunct but another vital technological component of one of the most far-reaching transformations in American history: the mechanization and consolidation of Southern agriculture.

Beginning in the 1920s and accelerating rapidly after 1945, with mules proving no match for the tractor in planting and cultivating his fields, the farmer needed to make not just the production but the transportation of his precious crop more efficient. When its bed was framed by slatted wooden side-bodies extending up to cab height, a pickup truck could haul a bale of cotton five miles to the gin in scarcely the time it took to hitch two mules to a wagon. And the same was no less true when there was fertilizer, feed, and seed to be picked up in town.

For families on smaller farms where there was no extra money for a car, the pickup might be forced into double duty in getting the family to church, the doctor, the grocery store, or school events. In rural farming and ranching areas, children quickly learned to drive the family pickup in the course of finishing off their chores. Local authorities tended to look the other way when one of the youngsters, whose face could scarcely be seen over the steering wheel, was dispatched via pickup to the feed or farm supply store. And even when they reached legal driving age, the pickup often remained their only means of getting to and from school or practice or simply escaping the isolation of the farm for a few hours in town.

Like country singer Alan Jackson, who couldn’t “replace the way it made me feel” when his daddy let him take the wheel of his “old hand-me-down Ford,” even in middle age and far removed for their rural roots, Americans reared on a farm retained vivid memories of the ways that experiences with pickups defined various stages of their youth. As a seven-year-old boy, I lived for the thrill of riding to the gin sprawled atop a load of cotton piled high on our pickup. But several years later, I cringed at the mere prospect of accompanying my dad in the same mud- and manure-encrusted truck on a trip to town, where I knew I faced the absolute certainty of encountering the prettiest, most stylish girl in my class.

The same forces that embedded the pickup in rural life would eventually begin to erode the very foundations of that life. The dwindling prospects of any but the largest and most mechanized farming operations pushed much of the increasingly marginalized population off the land toward the beckoning bustle of the metropolis. Although Americans fleeing the farm took their memories of the family’s dilapidated old pickup with them, actually parking such a vehicle in your driveway guaranteed a cold shoulder on arrival in the studiously urbane and fervently aspirational ’burbs.

Soon enough, however, rising metropolitan incomes and the growing popularity of camping, boating, and other outdoor activities justified the acquisition of newer, better-kempt pickups, equipped with once unheard of comforts and conveniences like leather seats, air conditioning, extended cabs, automatic transmissions, and power steering.

Annual sales of pickups topped 2 million by 1980 and had surged past 11 million in 2017, and the enormous and sustained profitability of its truck line has led Ford to limit its future sales of traditional cars in North America to the iconic Mustang and the yet to be unveiled Focus Active. With even the entry-level Dodge Ram 1500 stickering in the neighborhood of $65,000, many of today’s pampered pickups stand little chance of hauling cotton, hay, livestock, or much of anything else likely to scratch them.

The same forces that embedded the pickup in rural life would eventually begin to erode the very foundations of that life.

Though pickups continue to have some practical applications in theory, in practice, a great number of them serve their owners primarily as “lifestyle vehicles” or some might even say “lifestyle statements.” Indeed, for a sizable contingent of Americans, the pickup truck has emerged as a means of establishing their ties to a distinctly blue-collar identity in the course of flaunting their bourgeois prosperity. (Ironically, some older pickup owners, more concerned now with asserting their rural roots than flashing their middle-class creds, have fallen into a certain reverse snobbery, deliberately hanging onto vehicles like my 1994 GMC Sierra, which sports 110,000 miles on the odometer but not much of its original paint job.)

The pickup truck had become a fixture in country music well before 1975, when David Allan Coe disputed his songwriter friend Steve Goodman’s claim that his “You Never Even Call Me by My Name” was the “perfect country song,” pointing out that it made no references to pickup trucks, trains, mothers, drinking, and prison, all of which comprised the collective sine qua non of a legitimate country offering.

Only when Goodman inserted a new verse about a fellow who admits that he was “drunk” the day his mother got out of prison and laments that before he made it to the station to meet her in his “pickup truck,” she had been “runned over by a damned ol’ train,” did Coe admit that his friend had indeed achieved perfection in a country song.

More than 40 years later, the rusty rattletrap Coe had in mind is little in evidence in songs by Luke Bryan and others about good ol’ boys and gals dancing the night away to a deafening mix of country rock and hip-hop, or just sitting and sipping on the special “diamond plate” tailgate protector of a lavishly accoutered “big black, jacked-up” pickup, likely a Chevy Silverado, which Bryan himself favors.

With luxury pickups offering some of the highest profit margins in the industry, manufacturers are riding the pop culture wave, their truck ads awash in country artists and soundtrack. Luke Bryan now serves as an official “brand ambassador” for Chevrolet, and neither the cultural or economic distance between Music City and Motor City is as great as singer-songwriter Mel Tillis suggested 35 years ago in his classic, “Detroit City.”

Today’s fancy models may be portrayed in ways that seem to celebrate a wide-open, “anything goes” social outlook, but the pickup’s political implications have most commonly skewed right, even far right. The stereotypical combination of a gun rack and Rebel flag decal once conjured images of night-riding, racist thugs. Even sans flag, the racked shotgun or rifle (or both) invited suspicions that the driver was not simply a dedicated hunter but someone just itching to be crossed. Ironically, the proliferation of extended cab vehicles in combination with the increased risk of theft amid the burgeoning illicit traffic in firearms, has largely reduced the gun rack to a garage sale item.

This is not to say, by any means, that the image of the pickup is completely toxic. Across the political spectrum, aspiring candidates looking to tout their humble, homespun roots and values seldom pass on a photo op of them in, or beside, a truck, and, in this case, if the vehicle boasts a few nicks and scrapes, so much the better.

Although foreign truck manufacturers have forced their stateside competitors to pay more attention to fuel economy and vehicle dependability, “Buy American!” still seems to resonate in the pickup marketplace. Significant differences in overall production levels notwithstanding, it is striking that Ford sold nearly twice as many F-Series pickups last year as all of the leading Japanese heavy and mid-size pickup truck models sold combined. Marketing experts think it is no coincidence that potential buyers are reminded periodically that Ford was the only major automaker to refuse federal bailout funds during the last recession, a message that General Motors may have been trying to counter in a Chevy Silverado ad declaring “This is our country. This is our truck.”

If the pickup truck is deeply ingrained in our national life and culture, like America itself, it has been and remains many things to many people. For generations born on the farm, it may summon a wave of classically bittersweet nostalgia. For some whose experiences with it have been less “up close and personal,” it has at times been a metaphor both for unvarnished rusticity and a comfortable, laid-back middle-class existence. For others, it has been a disquieting signifier of latent violence or vigilantism and active prejudice.

More broadly, the story of the pickup truck affirms the historic capacity of Americans to adapt not only our social and political outlook, but also our cultural and consumer preferences to dramatic changes in the economic, technological, and demographic forces that have shaped our identity as a people.