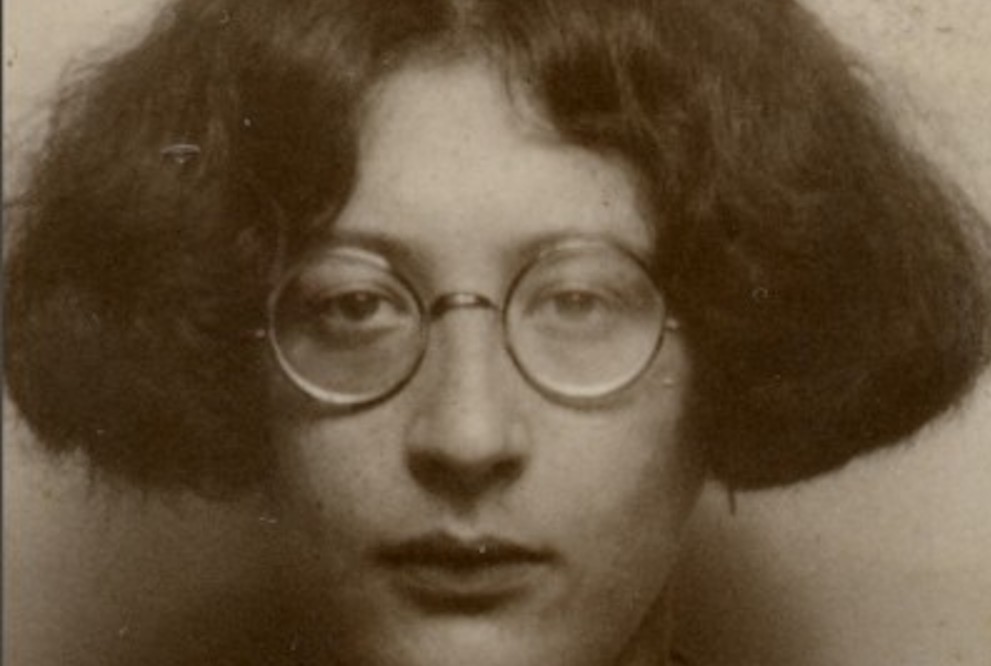 In December 1934, Auguste Detoeuf interviewed an applicant for a job at one of his factories. Ordinarily, Detoeuf did not make hiring decisions—he was, after all, the director of Alsthom, France’s largest maker of electric equipment. Yet Detoeuf was hardly an ordinary businessman. A graduate of France’s elite engineering school, the École polytechnique, Detoeuf neither talked the talk or walked the walk of French industrialists. He dressed, as one friend sighed, like a romantic violin virtuoso, and confessed to being an intellectual manqué.

Detoeuf no more belonged behind this particular desk than the job applicant belonged in front of it. It was not that she was a she—legions of women, after all, labored in French factories. Instead, it was because she was a graduate of France’s other elite school, the École normale supérieure—which, like the École polytechnique, had been founded by Napoleon—and had, until recently, taught philosophy to lycée students. Yet, the applicant—who, having long theorized about assembly line labor, now wanted to experience it at firsthand—was hell-bent on finding factory work with or without Detoeuf’s help. Given the applicant’s bad eyesight, crippling migraines, and manual dexterity—she had none—he decided it was better if he helped.

And so, on a frigid December day in 1934, Simone Weil began work at the Alsthom factory on the Rue Lecourbe, the clanking of her stamping press adding to the din of this industrial neighborhood in southwest Paris. That night, on the first page of her “factory journal,” Weil inscribed two epigrams. The first is hers: “Not only should man know what he is making, but if possible he should see how it is used—see how nature is changed by him. Every man’s work should be an object of contemplation for him.” The second, in Greek, is Homer’s: “Much against your will, under pressure of harsh necessity.”

This year marks the 75th anniversary of Simone Weil’s death. Her life was raw and short—she died at the age of 34, perhaps of willed starvation to mark her solidarity with her fellow citizens in occupied France—but her legacy is rich and long. With the posthumous publication of her writings, ranging from her reflections on politics and ethics to theology and faith, Weil now towers as one of the 20th century’s most influential and subversive thinkers. In particular, Weil’s conceptions of necessity and contemplation—couched in her journal’s epigrams but also grounded in her real experiences—remind us why the unique way her thought and life meshed matters more than ever.

The very act of thinking, Weil discovered, was the first casualty of factory work. A few days into her job, she was already reeling from fatigue. Her weariness stemmed less from the physical demands of her job—though they were great—than the unrelenting pressure to meet quotas and the numbing repetitiveness of the work. “The effect of exhaustion,” she wrote, “makes it almost impossible for me to overcome the strongest temptation that this life entails: that of not thinking anymore, which is the one and only way of not suffering from it.”

But despite near-constant migraines and bone-deep exhaustion, Weil did think about this kind of working life. How could she not? As a 10-year-old, she slipped out of her family’s spacious apartment in Paris to join a labor protest she had glimpsed from the window. As a university student, she earned the nickname “the Categorical Imperative in skirts” by way of acknowledging her fierce sense of moral duty. As a lycée teacher in the provincial city of Le Puy, she angered the authorities by protesting on behalf of the shabbily treated workers in the local stone quarry.

Weil’s engagement with the world spilled into her classroom, where she would confront her students with questions like “How many workers’ homes could be built for the price of a luxury liner?” These queries were not distractions from her role as teacher—the great majority of her students passed the baccalaureate, the feared final exam—but its very raison d’être. Weil insisted that humans will be free only when we have “understood the causes of oppression as clearly as we understand the gravity which causes a stone to fall.”

Harried by time clocks and hounded by foremen, serving a machine and severed from a real purpose, the workers were quite simply unable to think at all, much less think about resistance or rebellion.

The gravitational pull of factories was as strong as that of dark matter for her. Within the walls of the Alsthom plant—along with two other factories where she subsequently worked—Weil discovered the nature of le malheur, or affliction. The factory distilled the hierarchy and its train of harrowing inequities that structured French society. Her coworkers were, with few exceptions, women. During her first week, Weil knew the names of some like Madame Forestier (whose earned her title by her imperious demeanor), but also identified the nameless ones: the “Tolstoy fan,” the “Woman who gave me a roll,” and the “Mother of the burned kid.”

Even when she failed to learn the names of her coworkers, Weil captured the tragic nature of their lives. There was the drill operator who brought her 9-year-old son to work. When Weil found the boy fending for himself in the changing room, she asked the mother if he was also coming to work. “I wish he were old enough,” the woman replied matter-of-factly. One metal shearer suffering from inflammation in her pelvis could not get a transfer from the presses—work that, Weil wrote, “irrevocably and completely destroyed her reproductive organs.”

The women, Weil quickly found, were subject to the whims of the “big shots”—namely, the foremen. Days after she began at the factory, which made electronic components, Weil was unable to fully control a fly press designed to punch holes into metal boxes. As a result, she botched a full quota of metal components. Mouquet, her foreman, ordered her to redo all the pieces, but in a way that forced her to repeatedly duck her head to avoid the machine’s heavy counterweight. By the time she emptied her box of components, Weil also felt emptied. “I had the idiotic feeling that it wasn’t worth the effort to pay attention to protecting myself.”

On this occasion, Weil’s coworkers signaled their “pity and mute indignation” at what had been done to her. More often, though, the working conditions bred distrust and despair. “In this kind of life,” Weil realized, “those who suffer aren’t able to complain. Others would misunderstand them, perhaps laughed at by others who are not suffering, or thought of as tiresome by yet others who, suffering themselves, have quite enough suffering of their own. Everywhere the same callousness, with few exceptions.” To complain to a supervisor was an invitation for further degradation. “It’s humiliating, since she has no rights at all and is at the mercy of the good will of the foremen, who decide according to her worth as a worker, and in large measure capriciously.”

In effect, the foreman decided Weil’s worth not just as a worker, but also as a human being. Le malheur resulted less from physical suffering than psychological degradation. Ground down by relentless and repetitive physical labor, workers were also shorn of human dignity. Harried by time clocks and hounded by foremen, serving a machine and severed from a real purpose, the workers were quite simply unable to think at all, much less think about resistance or rebellion. Horrified, Weil realized that the factory “makes me forget my real reasons for spending time in the factory.”

Rarely at a loss for words, Weil struggled to explain her state of mind to friends. In her letters, she was often reduced to describing her experience as “inhuman.” But in her journal, she increasingly depicts the condition of workers as “slavery.” You kill yourself, she exclaimed, “with nothing at all to show for it … that corresponds to the effort you put out. In that situation, you really feel you are a slave, humiliated to the very depths of your being.” Before she entered the factory, even the Categorical Imperative in skirts might have raised her eyebrows at such a claim. Once she left the factory, a shaken woman in work clothes had come to see servitude as a near-universal condition.

Affliction, it turns out, is an equal opportunity employer. It is too easy, she warns, to comfort women as victims and condemn men as victimizers. Men no less than women, managers no less than workers, even employers no less than employees are all subject to necessity. All of us are driven, at varying speeds, by physical needs and political creeds, economic imperatives and social interests. None of us, as a consequence, escapes necessity’s gravitational pull. “Human history is simply the history of the servitude which makes men—oppressors and oppressed alike—the playthings of the instruments of domination they themselves have manufactured.”

Oddly, Weil had to be reminded of this point by Detoeuf. In 1936, more than a year after her factory experience, she related to Detoeuf a conversation between two employers she had overheard in a train. Complaining about the strikes then sweeping France, these two “well fed and well dressed” men believed they had everything to lose should the strikers succeed. That workers should demand their rights, Weil marveled, was seen as a “monstrous injustice” by these comfortable owners.

In his reply, Detoeuf agreed that many employers lacked a sense of civic duty and social obligation. Yet, he also suggested that Weil failed to show these employers the same attention she gave to the workers. Leave aside, he asked with restrained irony, “whatever may be rather grotesque and odious in the fact of being portly and well-nourished.” He suggested that if Weil put herself in their place, she would discover that “unless these men were more than human they could hardly think and feel otherwise.” Convinced their material well-being was at risk, they responded as Weil would respond if her mental well-being was threatened. They truly believed that the end of their world—which, for them, was the only world—was nigh. “You must really use your own imagination to try to grasp that these men have not so much imagination as you credit them with. For them, to have nothing more to lose means to have to give up everything that makes up their existence.”

Did Weil concede Detoeuf’s point? Her reply isn’t recorded, but it would be odd had she not, because it happens to be her point, too. The exercise of our imagination or attention is our one defense against the onslaught of necessity. Allowing us to peel back the layers of meaning we impose on the world, attention trains us to see others not as white or black, woman or man, worker or manager, but instead as us. In a word, we come to see the true nature of affliction. To acknowledge the reality of affliction, Weil observed a few years later, “means saying to oneself: ‘I may lose at any moment, through the play of circumstances over which I’ve no control, anything whatsoever I possess, including those things that are so intimately mine that I consider them as myself.’”

Seventy-five years after Weil’s death, how better to measure her life than by recalling her conception of the world as subjected to necessity, marked by affliction, and starved for our attention. That even Weil could fall short in the work of attention is a happy reminder that few activities are more difficult—or more important—than coming to see someone else as real.