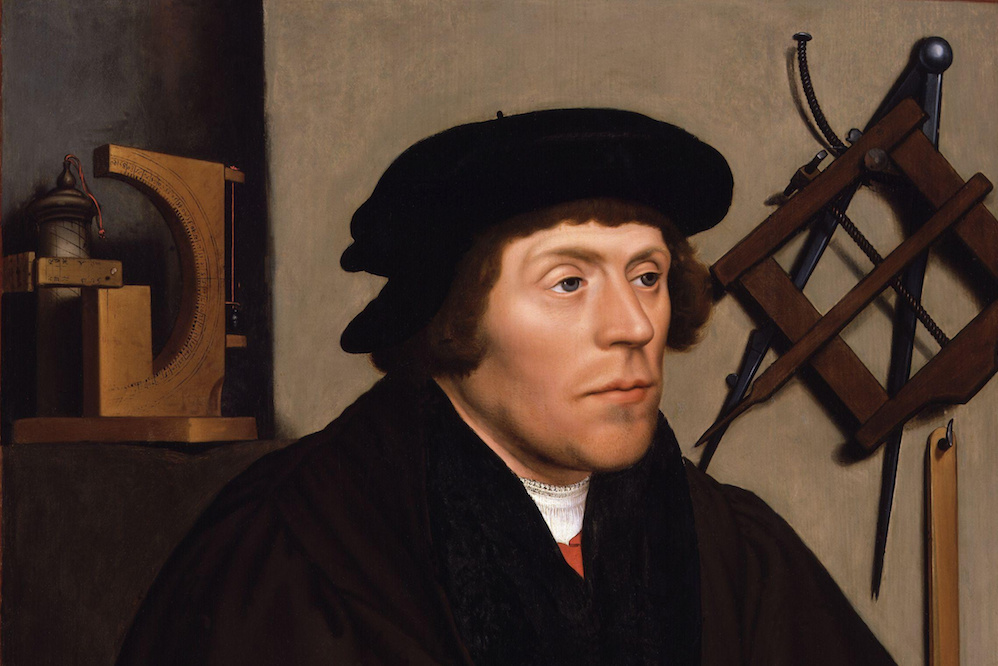 In 1025, two learned monks, Radolph of Liége and Ragimbold of Cologne, exchanged several letters on mathematical topics they had encountered while reading a manuscript of the sixth-century Roman philosopher, Boethius, whose writings supplied one of the few mathematics sources in the Middle Ages. These monks were not mathematicians, but they were inquisitive and keen to further their learning. They pondered Boethius’ words. They struggled. In particular, they puzzled over the theorem that the interior angles of a triangle were equal to two right angles. “Interior angles” of a triangle? What could that possibly mean? Neither had a clue.

Even the mathematically averse among us today recognize the basic geometry that Radolph and Ragimbold failed to grasp, for we live in a numerate society, surrounded by countless manifestations of mathematics. Broadly defined as the ability to reason with numbers and other mathematical concepts, numeracy underlies our current information explosion. Its clichés dot popular speech: “do the math,” “crunch the numbers,” “figure the odds.” From birth to death, numbers track our lives institutionally and demographically. Some scorn such customs (think of Mark Twain’s “figures” of “lies, damned lies, and statistics”), but we all acknowledge numeracy as a cultural given, and agree that mathematics fuels the science, technology, and industry of our world.

Still, as the story of Radolph and Ragimbold suggests, it wasn’t always so.

Before the modern era, whose origins we often date from the Renaissance (circa 1250 to 1600), folks certainly counted and measured. But, bluntly put, the abstractions of numeracy and mathematics mattered not a whit in any practical sense.

Instead, literacy—not numeracy—ruled. For our progenitors, it was the invention of writing, probably between 3200 and 3100 B.C., that served the human impulse to order and manage the flux of experience and its “givens” or “data” (from the Latin, datum, “thing given”). Early scripts provided the first information technology, creating the first “information age”—that of literacy. Its apogee occurred with the phonetic alphabet, devised by the Greeks, who correlated the sounds of speech with individual letter symbols so that each symbol stands for a single vowel or consonant.

The alphabet provided the substrate, the symbols for framing nouns and adjectives, and thus the means of creating definitions, which connected thought to the objects and processes of the world. For Aristotle, science would organize and explain data taken in through the senses, abstracted into words, classified into general and specific categories, and bound together with the formal tools of logic.

The medieval world of Radolph and Ragimbold inherited this word-based technology and culture, assimilating the classifying temper into the curriculum of its new universities. Seven liberal arts anchored the course of studies—three linguistic (the trivium of grammar, logic, and rhetoric) and four mathematical (the quadrivium of arithmetic, music, geometry, and astronomy). The latter were taught primarily as stepping stones to contemplation of spiritual realities, for example the divine order that infused numerical proportions, musical harmonies, spatial beauty, and heavenly motion.

Medieval mathematics was everywhere “enchanted,” its numerology animated with allegorical, generally theological meanings. (Witness the bizarre practice of scapulimancy—divination according to the geometry of sheep shoulder blades.) Its categories, nonetheless, remained separate and distinct from one another. Arithmetic, the subject of discrete things, was incommensurable with geometry, which treated continuous things. And so, the topics of “thing” numeracy stayed tucked away in the cubby holes of literacy.

But then came the Renaissance centuries, and two dominant trends that would dramatically challenge the classifying temper and its embedded mathematics.

The first was an information explosion, begun earlier but powered after 1455 by that great engine of learning, the printing press. The mind-boggling proliferation of printed works (roughly 200 million books by the end of the 16th century) leant cheap paper and ink to spreading the humanists’ recovery of ancient texts, the New World discoveries, and the mounting harvest of information gleaned from nature. There was, in the words of Harvard’s Ann Blair, “too much to know,” too much to classify. The surfeit of new information swamped traditional classes, fractured categories, and overwhelmed the classifying temper. The world lay “all in pieces, all coherence gone,” intoned poet John Donne in 1611, gazing rearward at a more intellectually comforting age.

A second trend was intertwined with this overwhelming volume of facts: the advent of a new information technology. Arising largely from practical activities, new ways to encode information brought forth new and different ways of seeing, imagining, and analyzing nature. In each category of the quadrivium—arithmetic, music, geometry, and astronomy—these new means of data collection and processing laid the foundations of modern numeracy.

Broadly defined as the ability to reason with numbers and other mathematical concepts, numeracy underlies our current information explosion.

In arithmetic, from the 13th century forward, the growing presence of Hindu-Arabic numerals habituated Europeans to a new counting system. Employed initially by merchants, bankers, and accountants, it steadily crept into the procedures of mathematicians and natural philosophers, craftsmen and artisans, musicians, and artists. The new system showcased a much simplified, functional notation of nine ciphers, the numerals 1 through 9, in contrast to the cumbersome Greek scheme of 27 alphanumeric letters or to Roman numerals with their vertical strokes and letters. Further, it featured a place-value arrangement of numerals, our familiar decimal system for determining a numeral’s value by its place in the ones, tens, or hundreds column (and continuing). And the symbolic representation of zero as an empty placeholder greatly facilitated arithmetic computations. All these innovations contributed to perceiving numbers as abstract relations, not just collections of things or objects. By Shakespeare’s day, the character of Shylock in The Merchant of Venice was figuring his pound of flesh with the new, more efficient Hindu-Arabic numerals.

In the world of music, a newly invented and abstract notation accompanied the rise of polyphonic singing, which evolved from Gregorian chant. With their longs, breves, semibreves, minims, fusas, and other equivalents of modern musical notes, composers and musicians caged and managed as information the elusive, ephemeral data of rhythm and pitch. For the first time in human history, time itself was measured by means of an independent system of symbols—standardized units of sound (notes) and silence (rests) that corresponded to physical, acoustical reality. Here, too, Hindu-Arabic numerals described the fluid, irrational proportionalities and harmonies comprising the dynamics of musical tone, and gave rise to new tuning systems, including the equalized temperament of modern pianos and other instruments with fixed, musical intervals.

Turning to geometry, the discovery of linear perspective in the visual arts yielded new expression and shape to visual information. Novel geometric techniques offered alternatives to definitions as a means of seeing objects in the world. Perspective grids tied spatial proportionalities to the changing viewpoints of a world in motion. This was a world of the “winged eye” in the memorable phrase of the Renaissance man himself, Leon Battista Alberti. One-to-one mappings between objects and their representations (two-dimensional drawings or three-dimensional sculptures) provided a new context for situating objects in space. Forerunners of modern geometry’s graphs, these techniques led eventually to separating and analyzing the vertical and horizontal axes of motion.

And in astronomy, new technologies brought heavenly motion and eternal time down to earth, enabling the amalgamation of terrestrial and celestial branches of knowledge, physics and astronomy. Before it became money, time became information. Its “inaudible and noiseless foot” (Shakespeare) succumbed to the technological mastery supplied by that “fallen angel,” the oscillating mechanical clock. Pope Gregory’s solar calendar (1582) and subsequent linear chronologies put the capstone on “clock time” writ large. Time’s mystery was converted to time’s problem, at least in part, as time itself increasingly became an abstract variable expressed in mathematical formulas, such as in Galileo’s laws of free fall, pendulums, and projectiles.

Common to all these arenas—commerce and arithmetic, polyphonic sound and music, art and geometry, timekeeping and astronomy—a novel means of creating and managing information made its appearance. The phonetic letters of definitions, which were the foundation of literacy, gave way to numerals, notes and rests, grid lines, and linear chronologies that would undergird a new numeracy.

These were not the enchanted symbols of allegory associated with words and meanings. As new ways of abstracting, encoding, storing, and manipulating bits of information, these empty symbols—curlicue marks and lines on a page—were purely functional. They guided reasoning with their rules of combination and with their algorithms.

Strangely enough, these symbols even captured “nothing” and made it useful. The placeholding zero (null quantity) in arithmetic enabled “borrowing” and “carrying” amounts from column to column, the basis of adding, subtracting, and myriad further computations. The rest (absence of sound) in music made it possible for composers to develop and depict sophisticated, dynamical musical rhythms. The visual vanishing point in the gridlines of artistic perspective provided focus, thereby giving instructions for the spatial arrangements of objects. And in clock time, the instant (point of no time lapse) separated the flow of time past from that of time future, allowing one to plot events, large or small, on a linear continuum. Later, the 18th-century French philosopher Jean le Rond d’Alembert would summarily refer to the empty symbols of numeracy as “phantoms.”

Mapped onto various dimensions of experience, the new techniques of information coding framed new understandings of phenomena and transformed our ways of seeing. And they provided the tools for a new, logical layering of abstraction upon abstraction that became the higher reaches of mathematics.

By Galileo’s lifetime (1564–1642) these practices had mushroomed and coalesced into the information technology of numeracy. Henceforth, as Galileo wrote in a passage often cited, the book of nature would be understood increasingly as “written in the language of mathematics.” With his own experiments and investigations, this “father of modern physics” led a new generation of natural philosophers into the mathematical analysis of matter and motion. Fermat and Descartes followed with their analytical geometries, joining the discreteness of arithmetic with the continuity of geometry. A generation later the calculus of Newton and Leibniz united the forces and motions of matter. On the cornerstones of numeracy, laid in the Renaissance, would be constructed the entire edifice of modern science … and with it our numerate culture, our own phantom world.