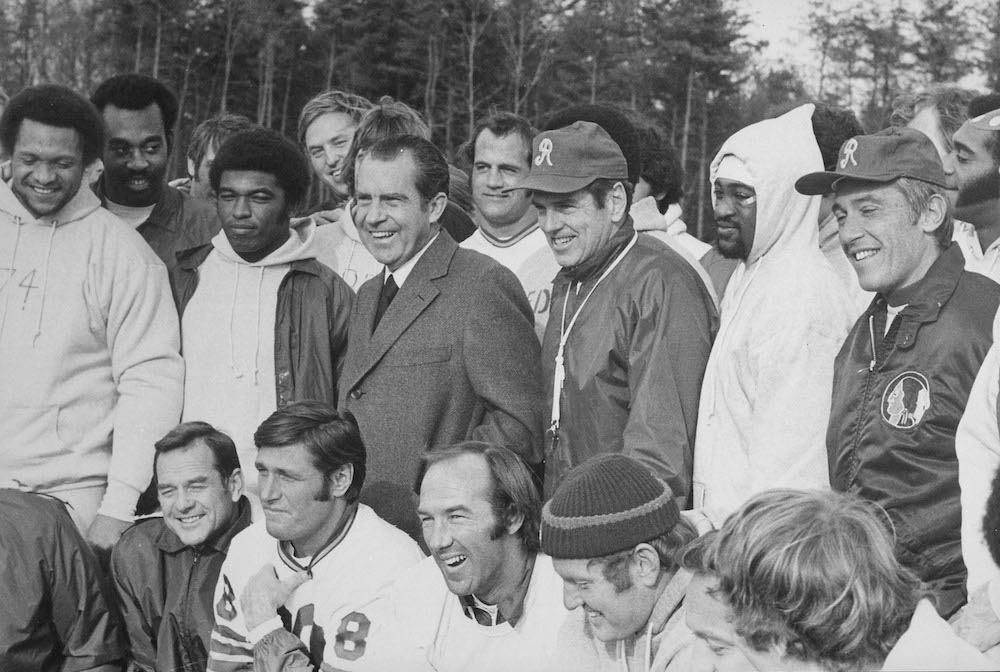 In January 1942, as the United States committed itself fully to World War II, President Franklin Roosevelt decided that baseball, then the national pastime, should sustain civilian morale during the lengthy struggle ahead. He implored its commissioner, Kenesaw Mountain Landis, to make sure the games went on, despite worldwide armed conflict. And so they did. Professional baseball players, Roosevelt argued, “are a definite recreational asset.”

Roosevelt did not extend that consideration to professional football players, whose sport did not register politically. As a result, the NFL nearly shut its doors during World War II. So many players were called to serve that several franchises had to merge. In fact, the league didn’t take off until it closely associated itself with national politics. For the last half-century, the intertwining of American football and politics has sustained both pastimes, and no one played both games more enthusiastically than Richard Nixon.

By the 1960s the United States was involved in a different war, and the politics of sport had changed, nowhere more so than in the nation’s capital. Washington was “a male town, and football is its game … the right metaphor for its politics,” journalist Hedrick Smith wrote. “Not to possess Redskins season tickets spells a fatal absence of status,” observed Mary McGrory, an astute observer of local mores. The Washington Post detailed David Broder, its prizewinning political columnist, to cover a preseason game. The Harris poll named football America’s most popular sport in 1965, the Gallup poll in 1972.

What had changed? The NFL, to grow its business, spent the post-war decades single-mindedly pursuing cultural currency. Under PR-conscious commissioner Pete Rozelle, who took the job in 1960, the effort resembled nothing so much as an advertising campaign: in Rozelle’s mind, “anything that caused people to connect with pro football” would do. Conveniently enough, that’s exactly where politics were heading. “We’re moving into a period where a man is going to be merchandised on television more and more,” a Nixon aide explained to a reporter in 1968.

The NFL published its own books, made its own movies, and eventually sponsored an essay contest officially certified as part of the 1976 bicentennial celebrations. NFL Creative Services’ books depicted professional football as the essential expression of a complex and multifarious America. NFL Films sold viewers a vision of the game as a spectacular, vivid, and heroic showcase for passionate excellence.

The NFL’s intention was to persuade audiences both popular and elite that the sport deserved support because it was quintessentially American, perfectly in tune with the contemporary world, and deserving of solicitude should it encounter any legal roadblocks.

Politicians benefited as well. Just as the NFL grew more adept at selling itself, so too did political figures begin to cultivate an interest in sports figures. In 1960, the John F. Kennedy campaign “put celebrity-gathering into mass production,” as one veteran consultant put it. A Nixon campaign organizer noted that “round[ing] up practically every All-American here” had helped the Republicans carry California.

Soon every politician was seeking out jocks. In 1968, Bobby Kennedy’s recruiters noted that athletic endorsements paid big dividends because “you are dealing with people who usually get press on their own steam.” Hubert Humphrey directed his campaign toward sympathetic sportswriters, attempted to get an article published in Sports Illustrated on the virtues of competition, and even scooped up Kennedy’s “top recruits” two days after his assassination. “With luck, if Teddy doesn’t run,” they could be enticed to hit the campaign trail for Humphrey.

Politicians across the spectrum hobnobbed with players and coaches, endorsed the campaigns of former players, and exerted themselves to win new franchises for their states. By the mid-70s, the collective intertwining of what one reporter called the “sport of politics and the politics of sport” had become inextricable.

The coziness between football and power rendered lobbying almost unnecessary: Lawrence O’Brien, Lyndon Johnson’s special assistant for congressional relations, recalled “inordinate efforts on behalf of the NFL in the Senate” by Senators in “constant quest…for a franchise location in their state.” No wonder that, when House Judiciary committee chair Emanuel Celler stalled a bill allowing the NFL to bypass the Sherman Anti-Trust Act and merge with the rival AFL in the fall of 1966, the House and Senate majority whips, Louisianans Hale Boggs and Russell Long, schemed to push it through the Ways and Means Committee. All it took was for the NFL to establish a team in New Orleans. “Pro football provides the circus for the hordes,” a disgusted Celler remarked.

In 1973, the House Interstate Commerce subcommittee “rammed through” without debate an NFL-backed measure preserving TV blackout rights for games that had not sold out 72 hours before their scheduled start. That blackout rule created incentives for fans and even cities to buy up unsold tickets. Without a sellout, TV stations would not show the home team’s games.

“It’s not true that Congress is divided, paralyzed, and unable to act with decision and leadership,” the journalist Nicholas von Hoffman acidly commented. “The pro football fans of America will be able to see their teams’ home games this year on television.”

Football on film sold America in ways that politicians liked. NFL Films perfected its craft with its magnum opus, They Call It Pro Football. Made in 1967, the 25-minute documentary neatly served the propagandistic, promotional, and political needs of both the league and the Defense Department. A number of reviews recognized the film’s social significance without fully grasping its extent, one extolling the “beauty and violence of the game—and its impact on the entire country.” At a briefing discussing how to sustain the morale of soldiers in Vietnam, General Creighton Abrams told Defense Secretary Melvin Laird that the men wanted football games.

“These films are important to them,” Abrams said.

Their bosses enjoyed these movies just as much. Secretary of State William Rogers brought a supply of NFL films on tour to show to foreign diplomats in the Far East in 1969. Air Force One flew an NFL film to Lyndon Johnson’s ranch in Texas, and Nixon later ordered a big-hits special for the White House. NFL Films’ productions were shown at the Continental Hotel in Paris, where homesick fans could savor the national pastime while munching hot dogs. They became a staple of life at military bases and on Navy submarines; and even in Saudi Arabia, where oil companies ordered copies of the films to console “American workers far from home.”

By the mid-70s, the collective intertwining of what one reporter called the “sport of politics and the politics of sport” had become inextricable.

By the 1972 election, the merger between politics and football seemed almost complete. In April 1972, George McGovern announced an athletes’ committee heavy on football players. Its chair, Redskins guard Ray Schoenke, a history major and academic All-American at SMU, had walked into McGovern’s office the previous summer and volunteered his services. Schoenke made himself a one-man political operation. He handed out campaign literature at training camp, obtained rosters from the league office, and worked the phones every night.

But McGovern got crushed by Nixon in what a disappointed journalist panned as “one of the dullest political football games ever played before a nationwide TV audience.” No surprise. He was up against the country’s most football-friendly president.

Richard Nixon was a football fanatic who did the most to turn the game to political ends. Nixon’s connections to the sport ran deep. He frequently credited his coach at Whittier College, Chief Newman, with teaching him never to quit. He officially kicked off his first campaign for president on Whittier’s field before 20,000 roaring supporters and thanked Newman when accepting the Republican nomination in 1968. In his final memoir, In the Arena, Nixon recalled that “I learned more about life sitting on the bench with Chief Newman than I did by getting A’s in philosophy courses.”

He was not averse to putting those lessons to use. Nixon and his staff invoked football and attended games at strategic junctures throughout 1969 and 1970 with clear political intentions.

In November 1969, the administration countered nationwide anti-war marches with “National Unity Week,” featuring flag displays and what a White House memo called “a patriotic theme or event” at halftime of every televised college football game. Nixon told reporters that he was going to spend the Saturday afternoon of the march the right way: “It was a good day to watch a football game.”

The next fall, he kicked off his campaign for a Republican Congress before an enthusiastic crowd at Kansas State by contrasting the school’s football team (good) with youth protest (bad). He followed that up by sharing a podium with Ohio State coach Woody Hayes, celebrating the recently-deceased Vince Lombardi as “an apostle of teamwork,” and accompanying the Secretary of Defense and Wisconsin’s Republican candidates for Senator and Governor to Bart Starr Day, an event honoring the legendary Packer quarterback in Green Bay. A reporter traveling with the campaign found Nixon’s rah-rah approach utterly predictable: “It may be hard for some politicians to reduce a major political campaign to football terms, but not this one.”

In 1971, Newman’s successor at Whittier, George Allen, became coach of the Redskins. Nixon and Allen had supported each other’s endeavors since the 1950s, and the relationship deepened in Washington. Allen campaigned for Nixon and attended White House functions, and Nixon sent Allen a shoebox-full of notes, called him at home, and even attended practice at Allen’s invitation in 1971 to encourage his players.

The 1972 convention ratified what Nixon’s Republican detractors termed “game-plan politics.” “The President likes football analogies, and the relationships of field position and ball control were the essential elements of what the campaign organization tried to do,” the head of his advertising agency explained about the smoothly-run spectacle.

Bart Starr introduced convention chair Gerald Ford, and newly-elected New York Representative Jack Kemp, a former NFL quarterback and “No.1 [political] draft choice,” as a Sports Illustrated reporter following his campaign had described him, gave an “electrifying” speech seconding the nomination of Spiro Agnew. Numerous Republican power brokers nurtured Kemp’s political ambitions for a decade: Herb Klein, Nixon’s communications director, gave him a newspaper column, Reagan and the RNC hired him, and the White House publicly supported (and graced him with a congratulatory phone call after) his first run for Congress.

Despite Nixon’s electoral dominance, football’s triumph wasn’t partisan. No single participant succeeded in cementing a dominant political meaning for the nation’s most popular sport. Instead, football’s popularity provided a new language for politics and debate. Was one candidate trying a Hail Mary with a last-minute attack? Was another running out the clock with a lead? Had miscommunication in the Congressional huddle made a key bill fail? A political scientist complained in 1975 that “the discourse of politics” threatened to be “completely absorbed by the language of sports.”

The NFL, a profit-minded entity, both cultivated and profited from all this political attention. So when Richard Nixon told the crowd at Bart Starr Day that “the 1960s will be described as the decade when football became the No. 1 sport,” that sport’s number-one fan was merely adding a presidential signature to what a broad popular referendum had already decreed.