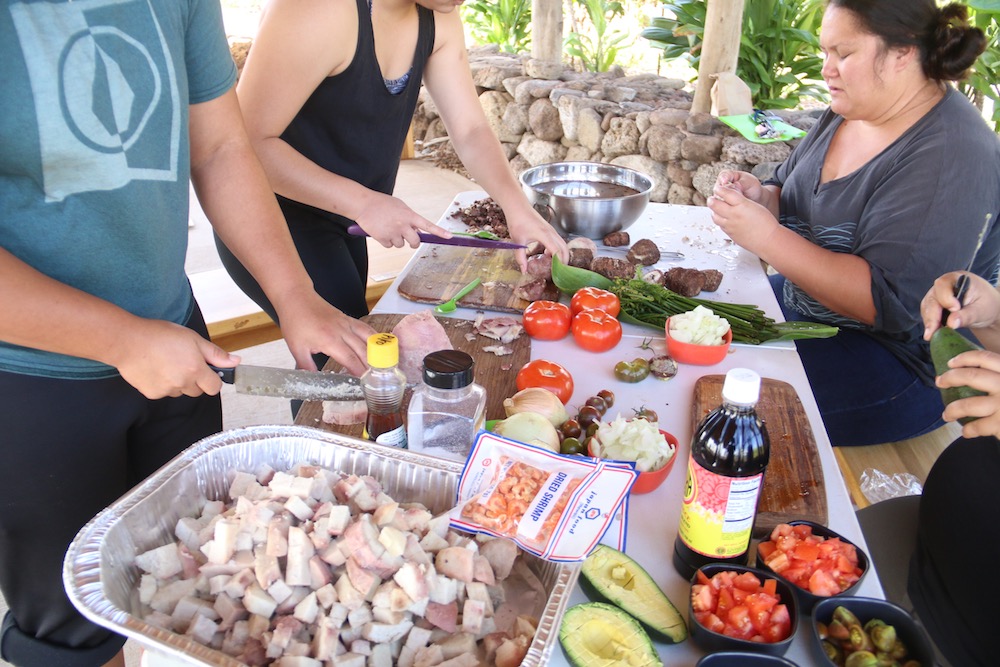 Where did all this poke come from?

You may have asked yourself that as poke—the chopped raw fish salad—begins to appear everywhere, from Paris to Pennsylvania. The short answer is, poke is another global food with deep roots in Hawai‘i.

Native Hawaiians have long known the pleasures of seasoned raw seafood. Being surrounded by the ocean probably has something to do with it. Centuries before Western contact, native Hawaiians would prepare i‘a maka (raw fish) and chop up reef fish (as in the striped and brightly colored fish you see when snorkeling in Hawai‘i), bones and all.

They would season it with sea salt dried in the sun; limu, or seaweed; and ʻinamona, roasted and crushed kukui nut, or candlenut. Without refrigeration, adding salt was both a method of seasoning as it was preserving, while the other elements gave the raw fish extra oomph: the ‘inamona, an oily nut, lent richness. Edible seaweeds—at one time, there were an estimated 70 types of seaweed along Hawai‘i’s coast, from soft and fuzzy to fine and hairlike to thick and crunchy—added flavor and texture.

But it wasn’t until the 1970s that the dish really gained popularity. At that time, the word “poke,” which in Hawaiian simply means to slice, or cut crosswise into pieces, came to be associated with the raw fish preparation we know now. Poke became more ubiquitous as advanced, commercial fishing techniques made fresh, deep-sea fish like ‘ahi, or tuna, more accessible. ‘Ahi’s ruby red, firm flesh is a lot more appealing than some of Hawai‘i’s near-shore fish, such as ‘ōʻio, with its gray and paste-like meat. Poke, once made primarily at home, and at a few Hawaiian restaurants, proliferated at the seafood markets, which started to offer varieties of poke in the glass refrigerated cases.

Hawai‘i’s multicultural influences mixed into the dish naturally. Today, in the islands, we still eat ‘inamona and limu seasoned poke, usually called Hawaiian or limu poke. But it’s the ‘ahi shoyu poke that’s the most popular. This dish—a mix of raw tuna, soy sauce, sesame oil, green onions, white onions, and chili pepper—gives a timeline of modern Hawai‘i. The chili peppers and onions came by way of explorers from Europe and missionaries from America. Descendants of the Japanese, Chinese, and Korean laborers—who were originally brought to work Hawai‘i’s sugar and pineapple plantations—influenced poke with their own raw fish traditions, and replaced the salt and ‘inamona with shoyu and sesame oil.

These days poke continues to evolve, with Hawai‘i’s seafood counters offering endless varieties. Poke flavorings may include wasabi, spicy mayo, kimchi, or oyster sauce, and the seafood encompasses everything from salmon to clams to raw, chopped crab, shell and all.

Poke doesn’t even have to be raw: Cooked octopus poke is a local favorite, and legendary poke chef Sam Choy makes a fried poke, transforming yesterday’s poke into today’s fought-over leftovers. It also stretches beyond seafood these days, with tofu poke and even a beet poke right at home alongside ‘ahi.

In Hawai‘i, poke is so much a part of the culinary landscape that it’s sold by the pound at supermarkets, eaten out of plastic containers on the couch with beer, and shared at every social gathering. It’s more often a snack or shared dish than it is a fast-casual meal, as it’s prepared elsewhere. Outside of Hawai‘i, poke is almost always served as a bowl, atop rice or zucchini noodles or even shredded kale in Los Angeles. It’s augmented with all kinds of toppings, from mango to goji berries (in Dusseldorf, Germany). These additions might be more a result of business decisions than of a quest for flavor, as fish outside of Hawai‘i is not as plentiful, cheap, or fresh, and thus needs more adulteration.

But back in Hawai‘i, poke is still primarily characterized by its simplicity—for the most part, it is only a few ingredients—just as it was hundreds of years ago.