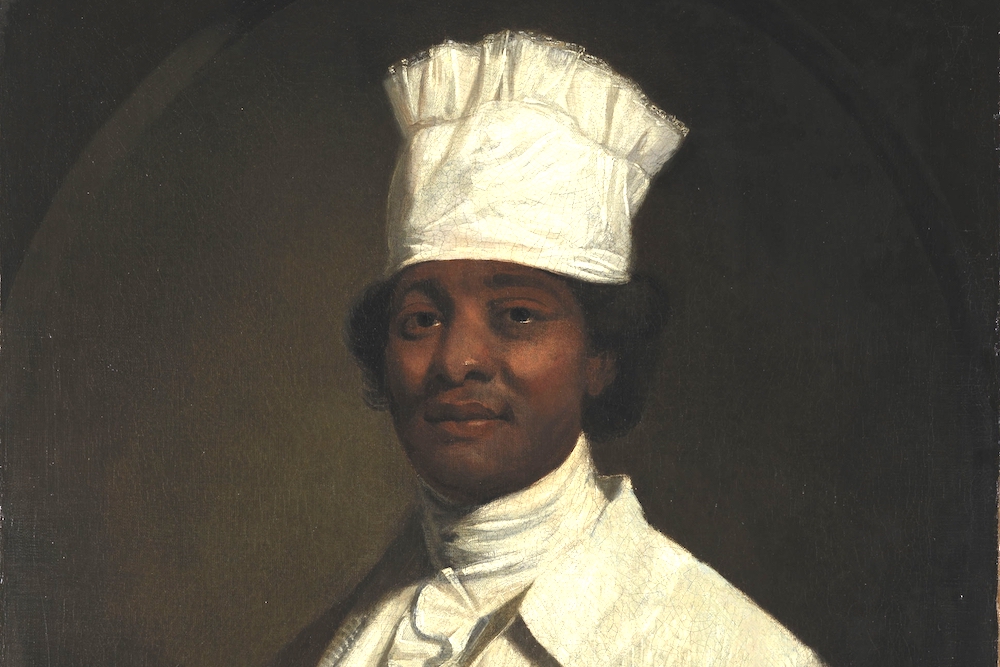 “We need to forget about this so we can heal,” said an elderly white woman, as she left my lecture on the history of enslaved cooks and their influence on American cuisine.  Something I said, or perhaps everything I said, upset her.

My presentation covered 300 years of American history that started with the forced enslavement of millions of Africans, and which still echoes in our culture today, from the myth of the “happy servant” (think Aunt Jemima on the syrup bottle) to the broader marketing of black servitude (as in TV commercials for Caribbean resorts, targeted at white American travelers). I delivered the talk to an audience of 30 at the Maier Museum of Art in Lynchburg, Virginia. While I had not anticipated the woman’s displeasure, trying to forget is not an uncommon response to the unsettling tale of the complicated roots of our history, and particularly some of our beloved foods.

It is the story of people like Chef Hercules, our nation’s first White House chef; and Emmanuel Jones, who used his skills to transition out of enslavement into a successful career cooking in the food industry, evading the oppressive trappings of sharecropping. It is also the story of countless unnamed cooks across the South, the details of their existences now lost. But from its most famous to its anonymous practitioners, the story of Southern cuisine is inseparable from the story of American racism. It’s double-edged—full of pain—but also of pride. Reckoning with it can be cumbersome, but it’s also necessary. The stories of enslaved cooks teach us that we can love our country and also be critical of it, and find some peace along the way.

It’s not easy uncovering the histories of enslaved cooks, who left few records of their own and whose stories often appear in the historical record as asides—incidental details sprinkled through the stories of the people who held them in bondage. In my recent study of enslaved cooks, I relied on archaeological evidence and material culture—the rooms where they once lived, the heavy cast iron pots they lugged around, the gardens they planted—and documents such as slaveholders’ letters, cookbooks, and plantation records to learn about their experiences. These remnants, scant though they are, make it clear that enslaved cooks were central players in the birth of our nation’s cultural heritage.

In the early 17th century, tobacco farming began to spread throughout Virginia’s Tidewater region. Before long, plantations were founded by colonists, such as Shirley Plantation, constructed circa 1613; Berkeley Hundred, and Flowerdew Hundred, whose 1,000 acres extended along the James River. These large homes marked a moment of transition, when English cultural norms took hold on the Virginia landscape.

Enslaved cooks wielded great power: as part of the “front stage” of plantation culture, they carried the reputations of their enslavers—and of Virginia—on their shoulders.

Traditions surrounding dining and maintaining a grand household were part of those norms, and the white gentry began seeking domestic help. At first, the cooks they hired on plantations were indentured servants, workers who toiled without pay for a contractually agreed-upon period of time before eventually earning their freedom. But by the late 17th century, plantation homes throughout Virginia had turned to enslaved laborers, captured from central and western Africa, to grow crops, build structures and generally remain at the beck and call of white families. Before long these enslaved cooks took the roles that had once been occupied by white indentured servants.

Black cooks were bound to the fire, 24 hours a day. They lived in the kitchen, sleeping upstairs above the hearth during the winters, and outside come summertime. Up every day before dawn, they baked bread for the mornings, cooked soups for the afternoons, and created divine feasts for the evenings. They roasted meats, made jellies, cooked puddings, and crafted desserts, preparing several meals a day for the white family. They also had to feed every free person who passed through the plantation. If a traveler showed up, day or night, bells would ring for the enslaved cook to prepare food. For a guest, this must have been delightful: biscuits, ham, and some brandy, all made on site, ready to eat at 2:30 a.m. or whenever you pleased. For the cooks, it must have been a different kind of experience.

Enslaved cooks were always under the direct gaze of white Virginians. Private moments were rare, as was rest. But cooks wielded great power: As part of the “front stage” of plantation culture, they carried the reputations of their enslavers—and of Virginia—on their shoulders. Guests wrote gushing missives about the meals in they ate while visiting these homes. While the missus may have helped design the menu, or provided some recipes, it was the enslaved cooks who created the meals that made Virginia, and eventually the South, known for its culinary fare and hospitable nature.

These cooks knew their craft. Hercules, who cooked for George Washington, and James Hemings, an enslaved cook at Thomas Jefferson’s Monticello, were both formally trained, albeit in different styles. Hercules was taught by the well-known New York tavern keeper and culinary giant Samuel Frances, who mentored him in Philadelphia; Hemings traveled with Jefferson to Paris, where he learned French-style cooking. Hercules and Hemings were the nation’s first celebrity chefs, famous for their talents and skills.

Folklore, archaeological evidence, and a rich oral tradition reveal that other cooks, their names now lost, also weaved their talents into the fabric of our culinary heritage, creating and normalizing the mixture of European, African, and Native American cuisines that became the staples of Southern food. Enslaved cooks brought this cuisine its unique flavors, adding ingredients such as hot peppers, peanuts, okra, and greens. They created favorites like gumbo, an adaptation of a traditional West African stew; and jambalaya, a cousin of Jolof rice, a spicy, heavily seasoned rice dish with vegetables and meat. These dishes traveled with captured West Africans on slave ships, and into the kitchens of Virginia’s elite.

You also see evidence of this multi-cultural transformation in so-called “receipt books,” handwritten cookbooks from the 18th and 19th centuries. These were compiled by slaveholding women, whose responsibilities sat firmly in the domestic sphere, and are now housed in historical societies throughout the country. Early receipt books are dominated by European dishes: puddings, pies, and roasted meats. But by the 1800s, African dishes began appearing in these books. Offerings such as pepper pot, okra stew, gumbo, and jambalaya became staples on American dining tables. Southern food—enslaved cooks’ food—had been written into the American cultural profile.

For the women who wrote and preserved the receipt books, these recipes, the products of African foodways, were something worthy of remembering, re-creating, and establishing as Americana. So why can’t we, as Americans today, look at this history for what it was? Colonial and antebellum elite Southerners understood fully that enslaved people cooked their food. During the 19th century, there were moments of widespread fear that these cooks would poison them, and we know from court records and other documents that on at least a few occasions enslaved cooks did slip poisons like hemlock into their masters’ food. 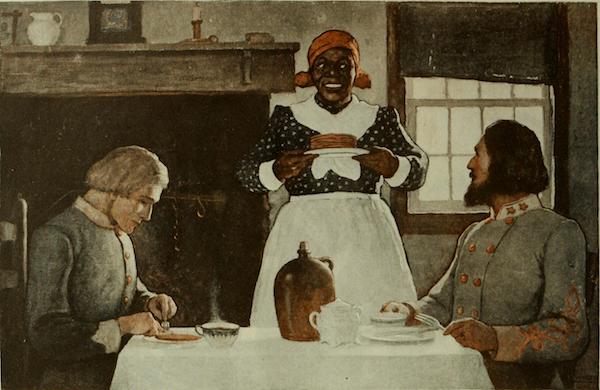 But the country began recalibrating its memories of black cooking even before the Civil War, erasing the brutality and hardships of slavery from a story of Old Southern graciousness. The revisionism went full throttle during the era of Jim Crow, when new laws made segregation the norm. Post-emancipation America still relied heavily on the skills and labor of newly freed African Americans. In a highly racialized and segregated America, still grappling with its guilt over slavery, white people created a myth that these cooks were—and always had been—happy. Advertisers leaned on characters like Aunt Jemima and Rastus, stereotypical black domestics, drawn from minstrel song.

While newly free African Americans fled the plantations to find work as housekeepers, butlers, cooks, drivers, Pullman porters and waiters—the only jobs they could get—Aunt Jemima and Rastus smiled while serving white folks, enhancing the myth that black cooks had always been cheerful and satisfied, during slavery and with their current situation. You can find their faces throughout early 20th-century black Americana, and they are still on the grocery shelves today, though modified to reflect a more dignified image.

My angry audience member was likely raised on the old enslaved-cook narrative in which these images took root, where the cook was loyal, passive, and purportedly happy—a non-threatening being whose ultimate goal was to help a white woman fulfill her own domestic vision. But to be an American is to live in a place where contradictions are the very fibers that bind a complicated heritage divided sharply by race. It is to ignore the story of Chef Hercules, or the real story of Aunt Jemima. By forgetting enslaved cooks’ pain to soothe our own, we erase the pride and the achievements of countless brilliant cooks who nourished a nation.