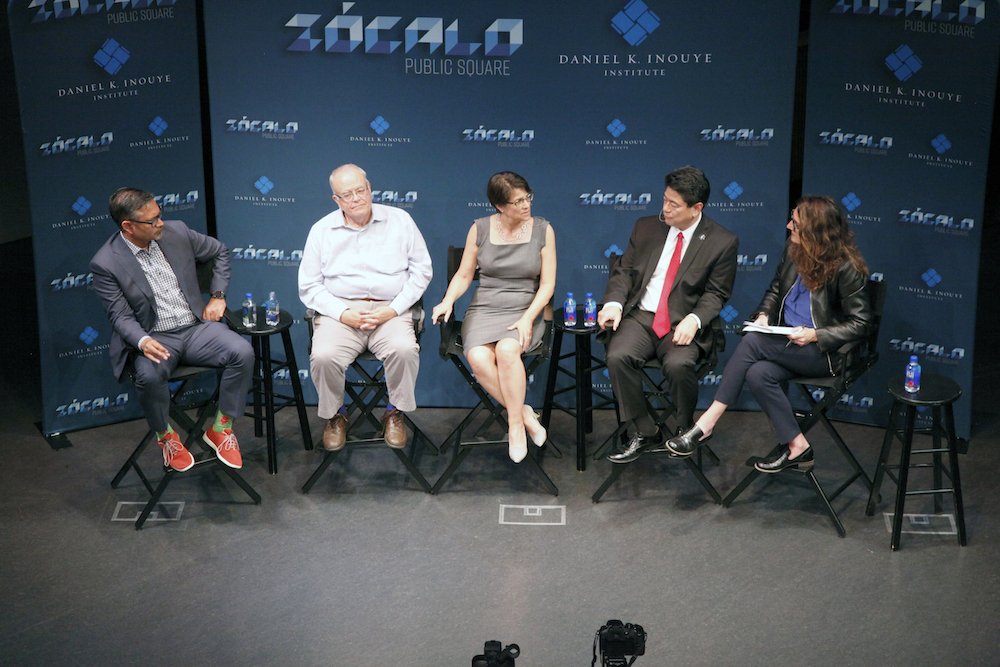 The first clause of the 14th Amendment is a scant 28 words long. Yet when the amendment was adopted on July 9, 1868, it advanced the crucial task of turning former slaves into full citizens of the United States. And by recognizing that anyone born or naturalized in the United States, and subject to its jurisdiction, is automatically a U.S. citizen, the amendment would go on to take center stage in some of the most important legal decisions of the last hundred years.

Now the 14th Amendment is again embroiled in a bitter debate, in a divided nation, over who can be a legal U.S. citizen—and who can be arrested, locked up in a cage in a Texas shopping mall, or deported. A Zócalo/Daniel K. Inouye Institute event took up the tortuous history of the 14th Amendment’s passage, and also pondered the question, “How Can Americans Defend the 14th Amendment When the Government Won’t?”

Before their exchange got underway, the evening’s theme was underscored by an emotionally resonant reading by Irene Hirano Inouye, former president and founding chief executive officer of the Japanese American National Museum in Los Angeles. She recited three excerpts from her late husband U.S. Senator Daniel K. Inouye’s keynote address to the 1968 Democratic National Convention, in which Sen. Inouye stressed the rights of all Americans, the duties of citizenship, and the importance of community—at a moment when national leaders were being assassinated, the Vietnam War was splitting the country apart, and cops were clubbing protestors outside the convention hall.

Then moderator Madeleine Brand, host of radio station KCRW’s “Press Play,” opened the conversation by asking the panelists about the historical context in which the amendment came about, and whether its guarantee of “birthright citizenship” had effectively settled the question of whether former slaves were to be treated as U.S. citizens. Indeed, the 13th Amendment had abolished slavery, but after the Civil War the citizenship status of former slaves still was an “open question,” as Jones, the historian, pointed out.

The 14th Amendment arose during the turmoil of Reconstruction, in the face of furious opposition from the Southern former states of the defeated Confederacy, said Epps, who also covers the Supreme Court for The Atlantic. Among its most virulent opponents was President Andrew Johnson, a Southerner who’d succeeded the murdered Abraham Lincoln. How close did the amendment come to not passing?, Brand asked. “The answer is, incredibly close,” replied Epps who, as a native of Richmond, Virginia, was raised with an awareness that many Southerners still hadn’t accepted the amendment, decades later. “I grew up in a place and time when my teachers told me the 14th Amendment had never been validly adopted.”

The struggle to get it passed, Epps added, “is one of the most suspenseful stories in American history” and has many parallels with today’s heated Washington polemics over immigration policy, national security, and policing of the border. Epps said there also are several commonalities between Andrew Johnson—whom he described as a racist and, euphemistically, an “eccentric”—and the current commander in chief.

But President Johnson and his white-supremacist Southern supporters ultimately lost the battle, and the 14th Amendment in subsequent rulings “remodeled” the Constitution, Epps said. In the same way that the bulk of Western philosophy is simply a footnote to Plato, Epps said, “most of our constitutional law in the 20th century was footnotes to the 14th Amendment.”

Fast-forwarding to the present, Brand asked how the amendment applies to the current legal mayhem at the southern border. “What we’re seeing now is a de-humanization of immigrants,” said Noorani, of the National Immigration Forum. “There’s almost … gradations of access to due process, depending on who you are, where you were born, and what your immigration status is.”

Historical parallels and past U.S. mistakes loomed large in the discussion, none larger than the example of Fred Korematsu, the American civil rights activist who helped lead the outcry against the internment of Japanese Americans in concentration camps during World War II, and later became a fugitive himself.

During that ignoble chapter of national history, “Due process went out the window, equal protection under the law went out the window,” said panelist Maki of Go For Broke. The Supreme Court upheld the internment policy, and showed considerable deference to President Franklin D. Roosevelt—much as the current high court has deferred to President Trump on his bitterly controversial travel ban, the panelists observed.

Maki noted that this August 10 will mark the 30th anniversary of President Ronald Reagan’s signing of the Civil Liberties Act of 1988, which, among other provisions, earmarked thousands of dollars in individual payments to Japanese-American survivors of the internment camps.

Today, as in the 1940s, a harsh crackdown on immigration has been justified by claims that U.S. security is at risk. Today, as then, a presidential administration has treated some immigrants differently from other Americans by making claims that rested on dubious evidence, or that were outright contradicted by the available evidence, the panelists said.

For example, Noorani pointed out that, in February 2017 remarks, President Trump suggested that immigrants were more likely than other Americans to be terrorists. A recent letter issued by Trump’s own Justice Department declared there was no evidence that this is true. “It’s that same twisted logic that exists today that existed 75 years ago,” Maki said.

Epps agreed. “This is a cyclical debate that goes on and on, there are no new tropes,” he said. “We just keep having to fight the same battles over and over.”

During the question-and-answer period, an audience member from Redondo Beach asked whether any laws are being broken at the border, given there’ve been increasing reports of immigrants, including children, suffering emotional, physical, and sexual abuse. Noorani replied that these questions still are under legal review and are the subjects of active debate. But even if technically no laws are being broken, as the administration asserts, “They are certainly interpreting laws in a very awful way,” Noorani said.

Another audience member asked how Americans can try to make sense of these complex interpretive questions of constitutional law—particularly given the Trump administration’s attacks on the media and attempts to treat any negative coverage of its immigration policy as “fake news.”

“We’re in a moment where we have to educate ourselves,” Jones replied. “We have to ferret out those sources that we trust.”

More broadly, the panelists concurred, supporters of the 14th Amendment’s enduring legacy must find stories that illustrate its power and importance. Of course it’s necessary to win legal arguments, Noorani said, but it’s equally necessary to tell a compelling national story about why equal rights and protection for all Americans matters, and why they must be defended. 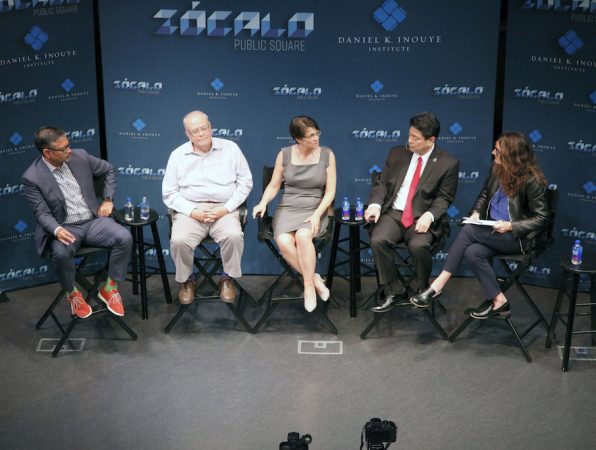 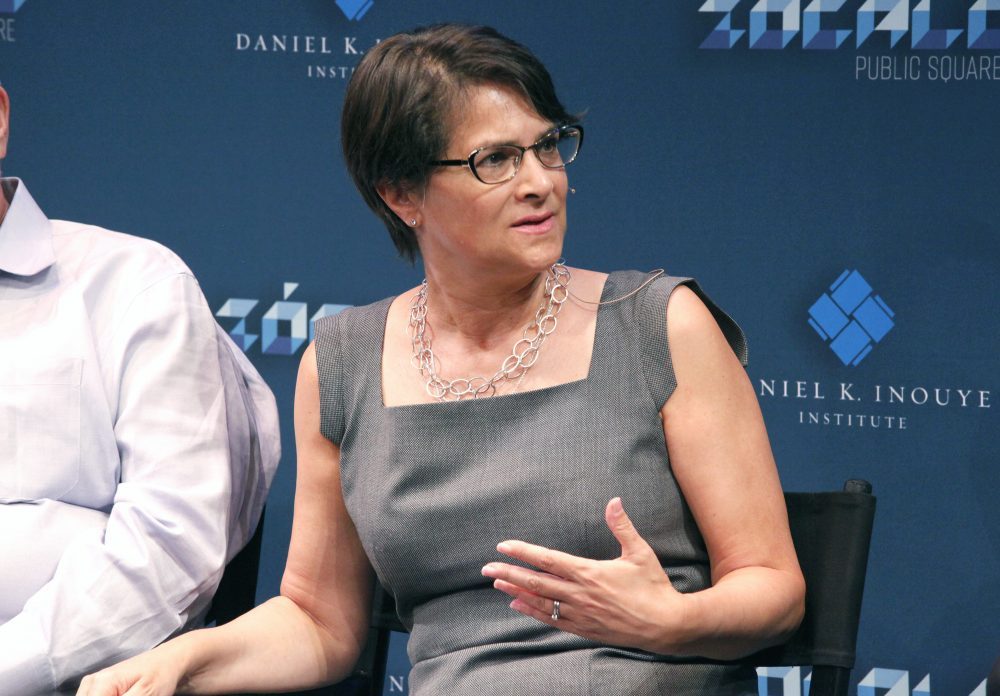 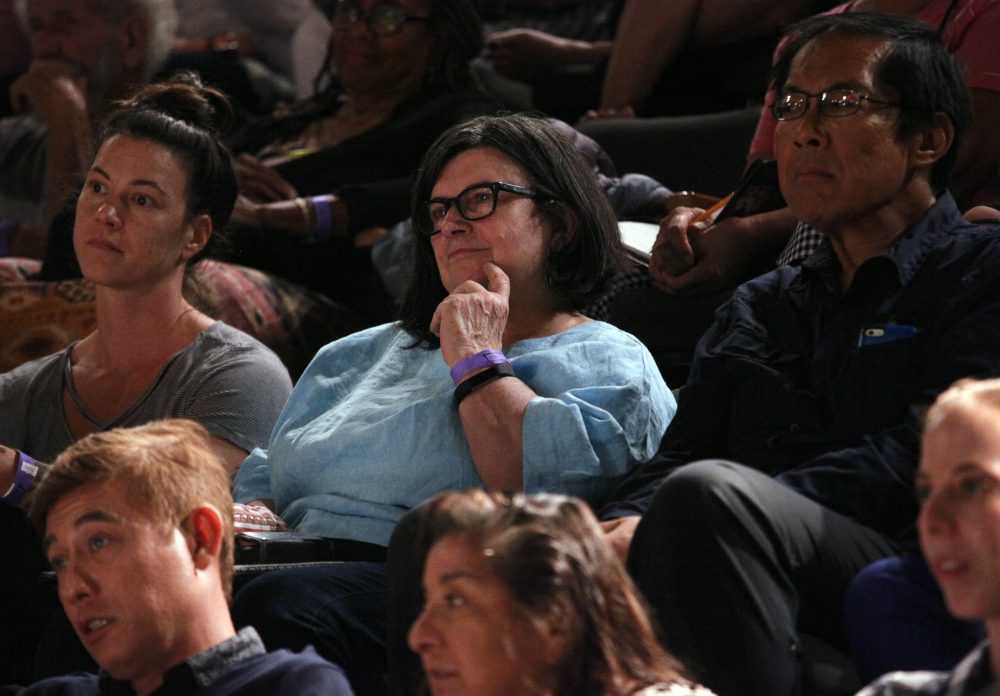 A full house at the National Center for the Preservation of Democracy in Los Angeles. 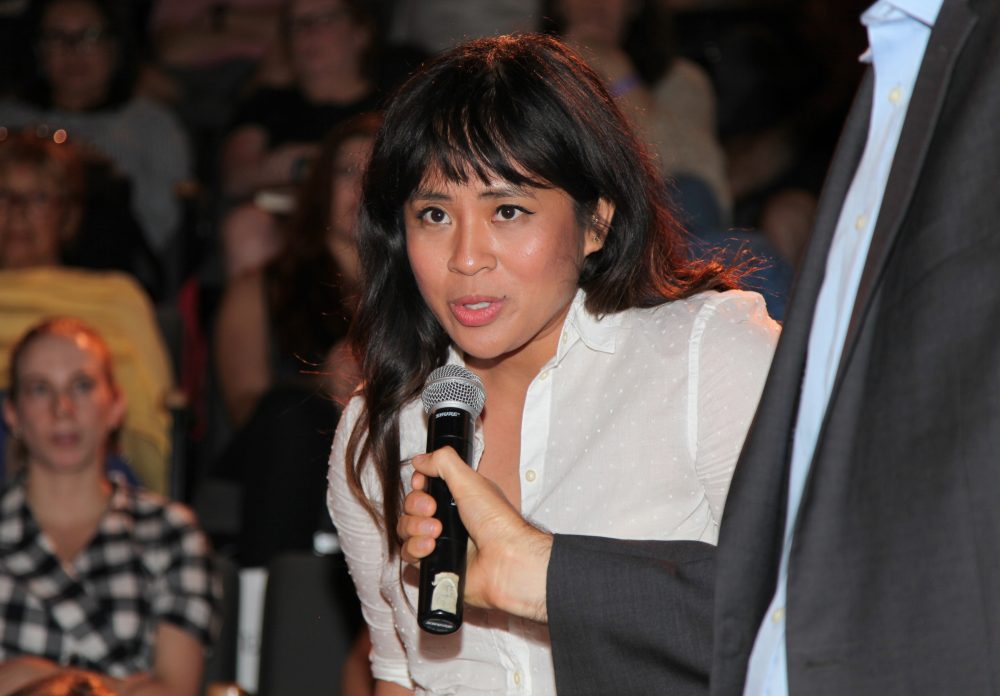 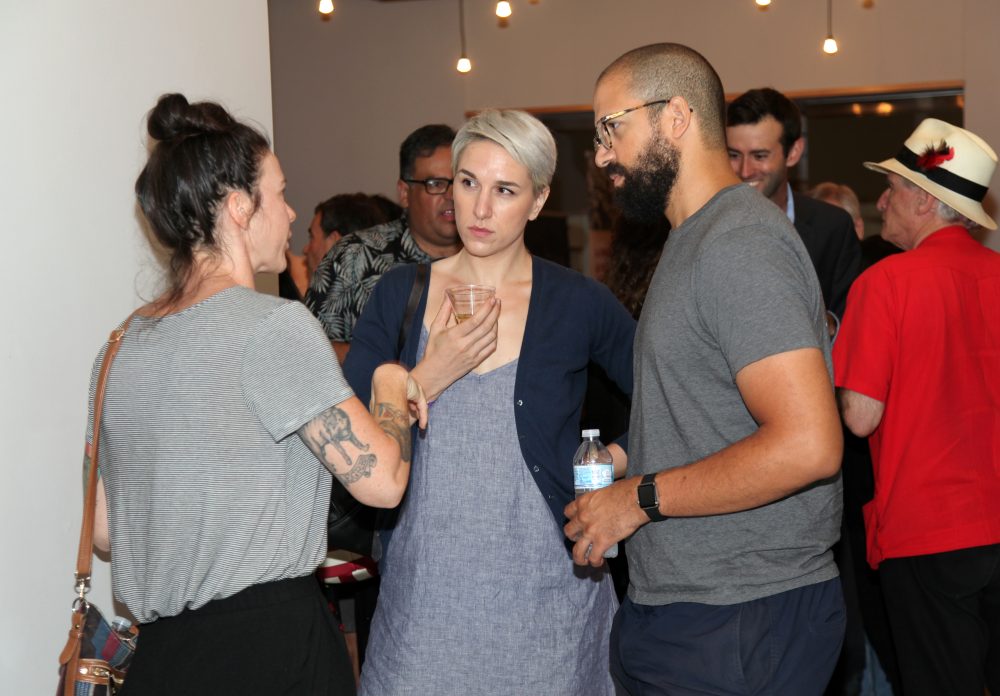 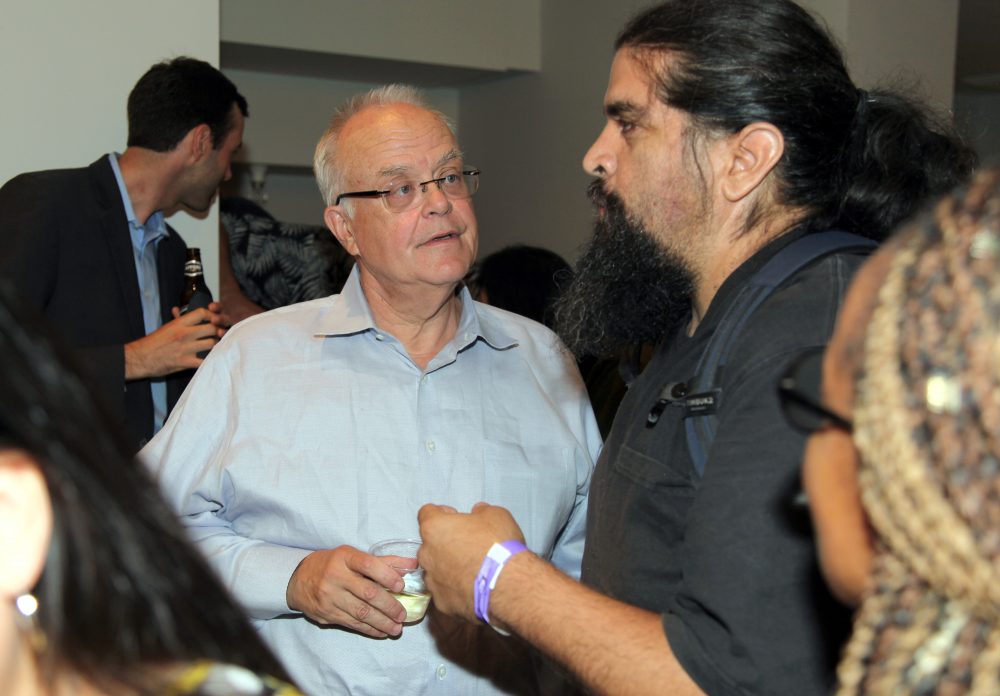