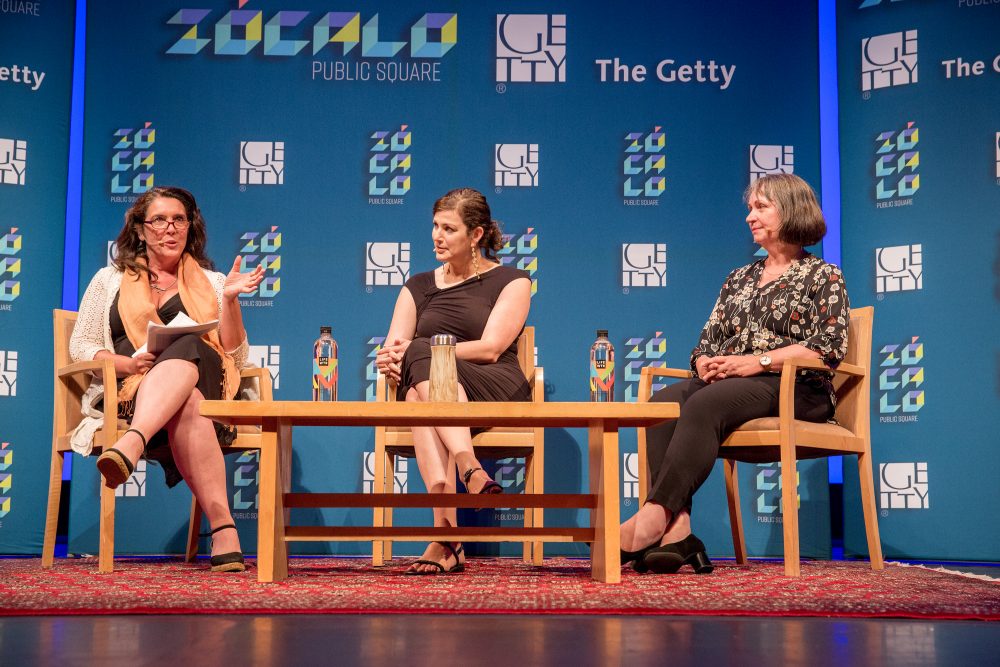 Moderated by Bettany Hughes, a historian and documentary filmmaker, the conversation drew on the expertise of UCLA archaeologist Kara Cooney, author of The Woman Who Would Be King: Hatshepsut’s Rise to Power in Ancient Egypt, and University of Manchester Egyptologist Joyce Tyldesley, author of Cleopatra: Last Queen of Egypt.

After confessing to her “enormous girl crush” on Cooney and Tyldesley for their exemplary scholarship, Hughes drove right into what she ironically called the “completely uncomplicated and uncontroversial question” of whether women, in fact, ever have ruled the world.

For feminists, the answer wasn’t encouraging.

“I don’t know,” Tyldesley replied. “It was always, I think, unusual for a woman to take a position of power.”

Cooney concurred definitively, “the answer is no.”

But even if there is “no mythical matriarchy to which we can return,” as one panelist put it, history offers some instructive examples of women who were able to take and hold power through a combination of brilliance, bravery, guile, beauty, gender-bending self-reinvention, and—perhaps most importantly—the ability to control and manipulate their own image.

In ancient times, as now, women seeking to rule had to contend with the constraints imposed by existing cultural traditions, political structures, patriarchal hierarchies, and male-driven religions. While earth-mother goddesses and fertility deities abounded in the ancient world, aspiring women rulers had to push back against spiritual systems dominated by male gods and male priestly castes. That may have been even truer under the Abrahamic religions of Judaism, Christianity, and Islam than it was in pagan cultures. “Monotheism usually doesn’t do anybody any favors, particularly women,” Cooney observed.

Tyldesley cautioned that historians of the ancient world, like herself, must be very careful about making assumptions that often have to be based on fragmentary evidence and scraps of records.

But one powerful woman who history definitely shows to have been in charge was Hatshepsut, the fifth pharaoh of the 18th Dynasty of Egypt. This remarkable ruler helped establish trade networks and was a prolific builder of temples and other public works. An inscription on her tomb described her as “Mistress of Two Lands,” the type of homage that Egypt’s mightiest male potentates typically showered on themselves.

“In a way, it speaks to how the Egyptian culture allowed a female to take all those claims as her own and feminize them,” Cooney said.

Indeed, Tyldesley chimed in, the concept of “king” in ancient Egypt wasn’t necessarily gender-linked; it was quite possible for a woman to take on that role, although usually the title was bestowed on males. Over the course of her career and reign (circa 1478–1458 B.C.), Hatshepsut controlled her image in strategic ways that underscored the changing nature of her power.

To wit, early on, she was represented in a nubile, eroticized, traditionally feminine style. But as her reign progressed, she adopted a more masculine public persona and custom of dress. In one of her best-known images, a statue in the collection of New York’s Metropolitan Museum of Art, she registers as an almost androgynous being; in other representations, she’s buff and muscled like a man.

Hatshepsut’s fluid style of self-representation was matched by her flexible style of power-wielding, Tyldesley suggested. Instead of subjugating conquered peoples to try to make them part of the Egyptian empire, she preferred to engage them through trade.

“I think if you’re a woman in the ancient world, Egypt is the place to be,” Tyldesley concluded.

Cooney agreed that it may have been easier for a woman to take power in Egypt, “an authoritarian, tightly controlled society” ruled by dynasty, as opposed to democratic Greece or republican Rome. Cooney drew a parallel to Hillary Clinton, speculating about whether we associate the former Secretary of State and one-time First Lady with dynastic power, rather than judging her on the basis of her own merits.

Taking up the point, Tyldesley noted that there are examples of ancient queens who temporarily filled in as rulers for husbands who had died or were away in battle. These women often ruled on behalf of their infant sons until their offspring were old enough to assume the throne, at which point their mothers stepped back from power.

Both today and throughout the centuries, powerful women often have aroused a deep ambivalence. Hughes noted that while a goddess like Venus is generally depicted as a creature of pure, unadulterated beauty and sensuality—fairly harmless, apart from her role in starting the Trojan War—some of Venus’s counterparts, like Isis, are represented in more complex ways. They’re fighters as well as lovers, “bringers of death as well as bringers of life.”

What’s more, Cooney said, there’s “a great disconnect” between the way that some societies worshipped man-eating, ferocious goddesses while remaining deeply sexist and segregated. “That fierceness, that PMS-ing b!$©h” quality is something that certain societies had to harness and tame, and put to use in more socially acceptable ways, like protecting the king.

Perhaps few rulers embody the contradictory demands placed on women more than Nefertiti, who appears to have followed a singular trajectory from queen to co-ruler to solo ruler. In the world’s imagination, she’s the glamorous woman immortalized in a famous bust that sits in a Berlin museum. But according to Tyldesley, “We don’t even know if she was beautiful. We have this one bust and from that, this whole mythology has developed.”

Similarly, much of what we think we know about Cleopatra—from her putative powers of seduction to the manner of her suicide—comes from the writings of Roman authors, filtered through the plays of Shakespeare. Another powerful woman whose name gets short shrift and whose remarkable deeds have been obscured by time is the 6th-century empress Theodora, a humble exotic dancer who became a powerful and revered ruler-reformer—a sort of Byzantine Eva Perón.

Although the evening was devoted to examining female rulers of the pre-Christian world, one audience member during the question period raised the example of Queen Elizabeth I. The panelists agreed that she should be on the list of the world’s 10 most powerful female rulers of all time. Another audience member proposed Margaret Thatcher, the long-serving British prime minister known as the “Iron Lady” for her take-no-prisoners economic policies and steely response to Argentina’s attempted takeover of the Falkland/Malvinas Islands in 1982.

Hughes replied that although Thatcher still divides Britain as deeply as Marmite, “she definitely taught me that women can be in power.”

“Whether you like her policies or not,” Tyldesley said that Mrs. T ensured that, “girls don’t grow up in England thinking, ‘I can’t be the prime minister.’”

But, in the end, it may not be possible to assess how much women like Thatcher, Clinton, and Angela Merkel owe to their ancient female political forebears.

“I think we’re missing a whole host of powerful women,” Tyldesley said, “simply because there wasn’t someone to write down what they do.” 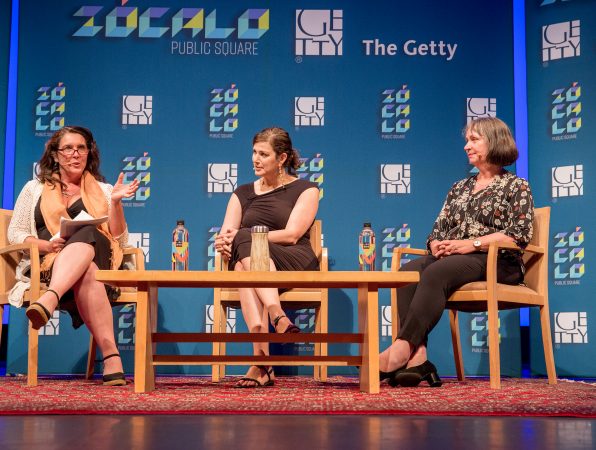 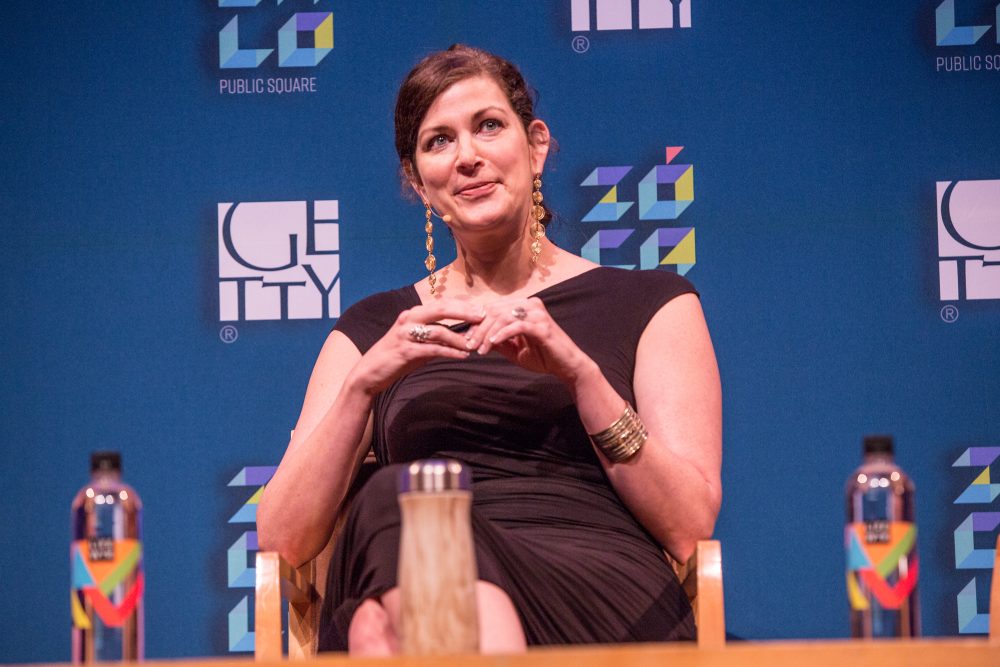 Kara Cooney, UCLA archaeologist and author of The Woman Who Would Be King: Hatshepsut’s Rise to Power in Ancient Egypt. 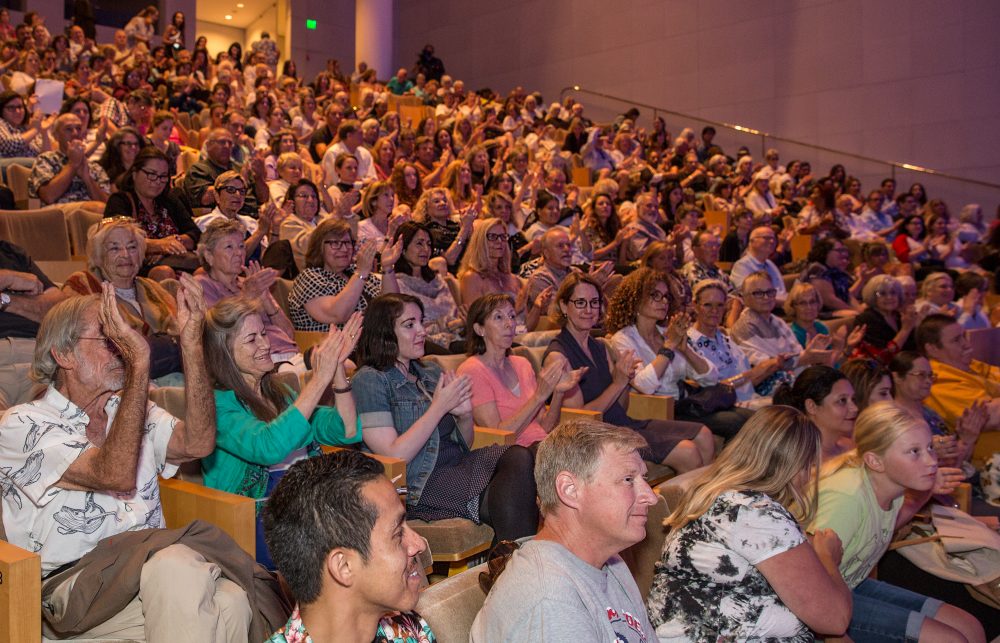 An overflow crowd at the Getty Center. 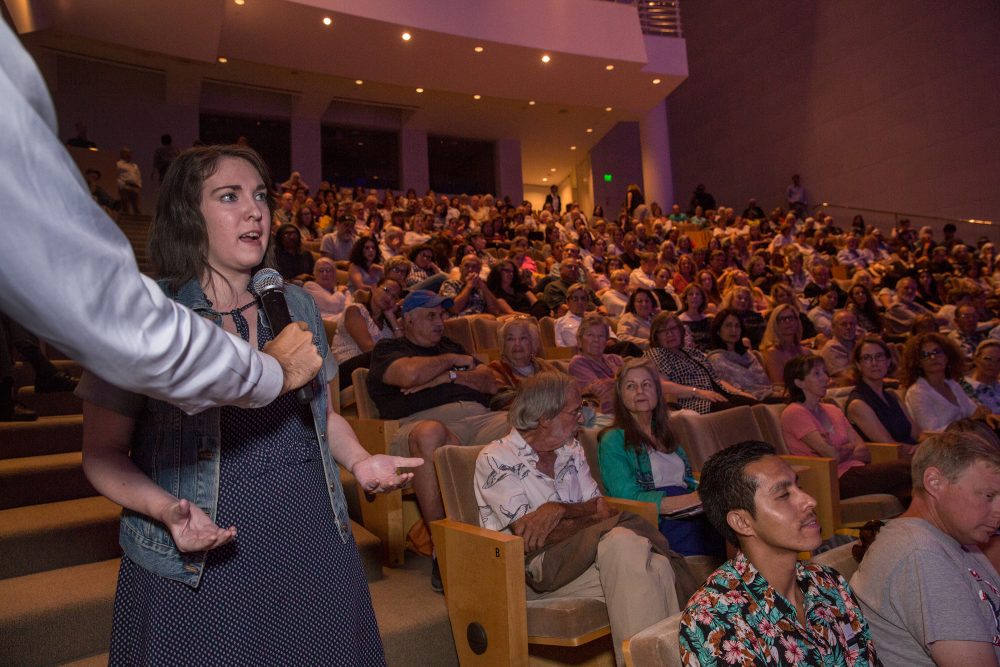 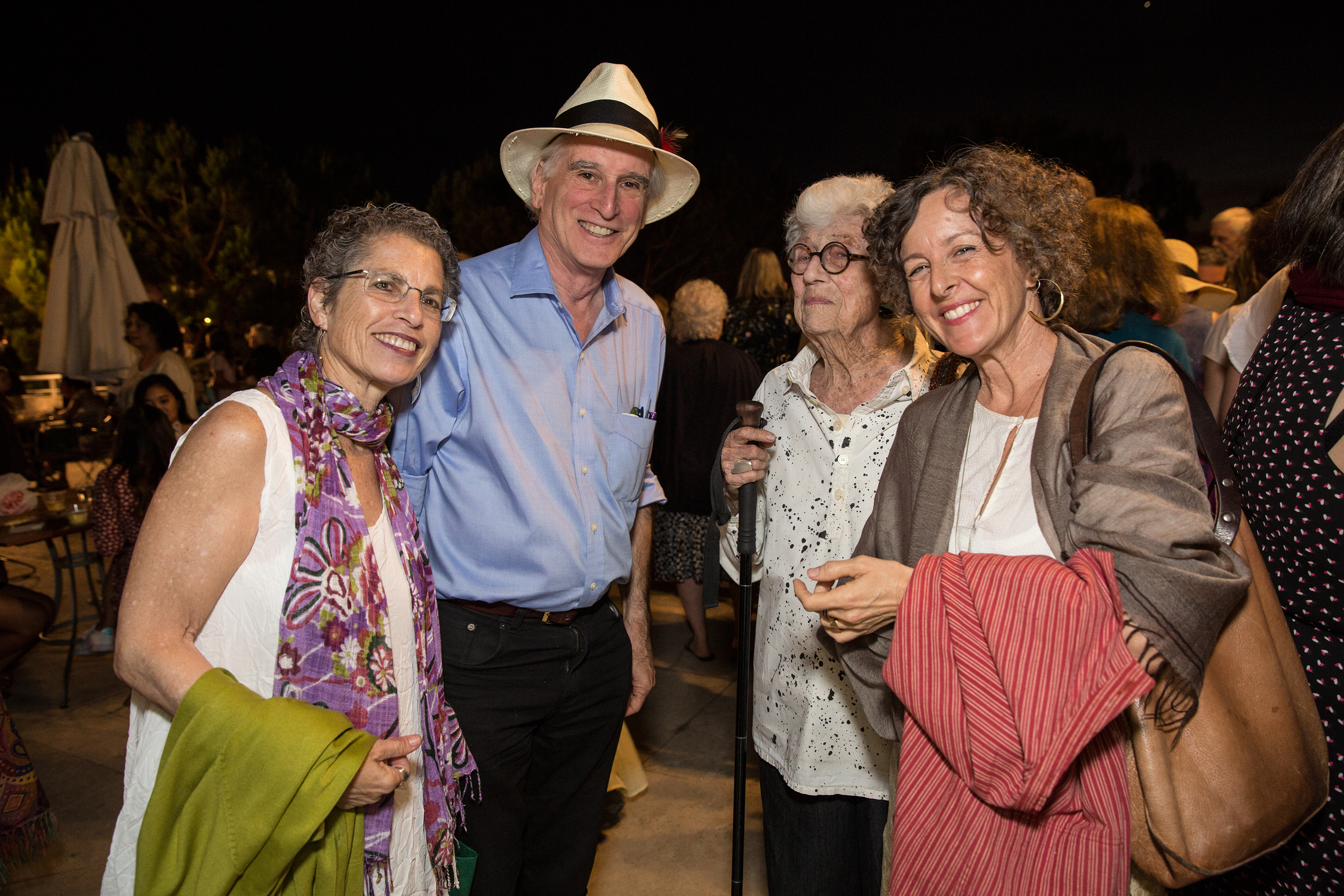 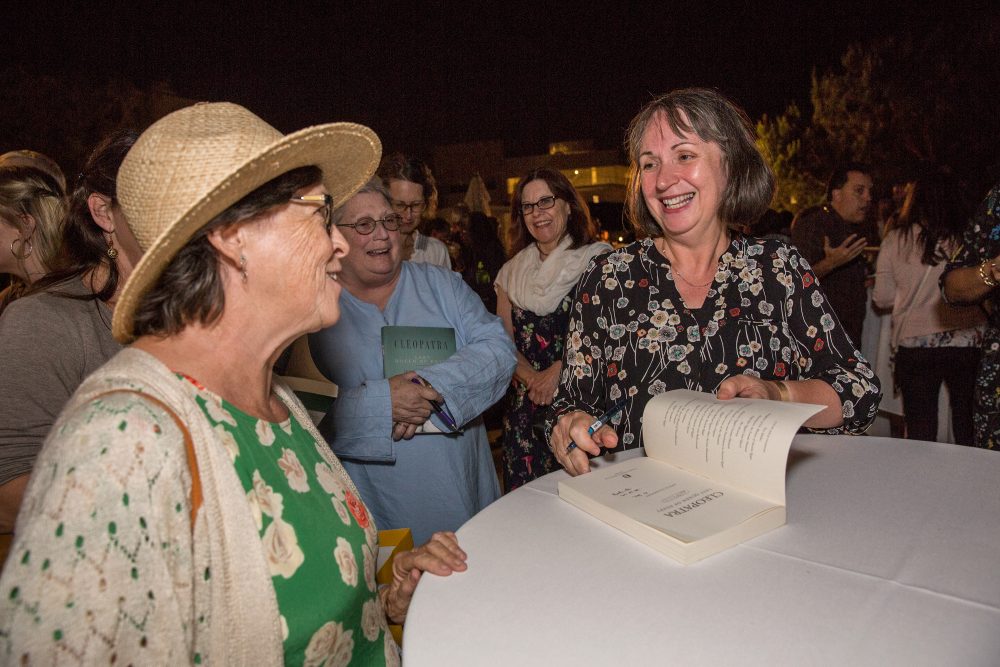 University of Manchester Egyptologist Joyce Tyldesley, author of Cleopatra: Last Queen of Egypt, speaks with guests at the reception.